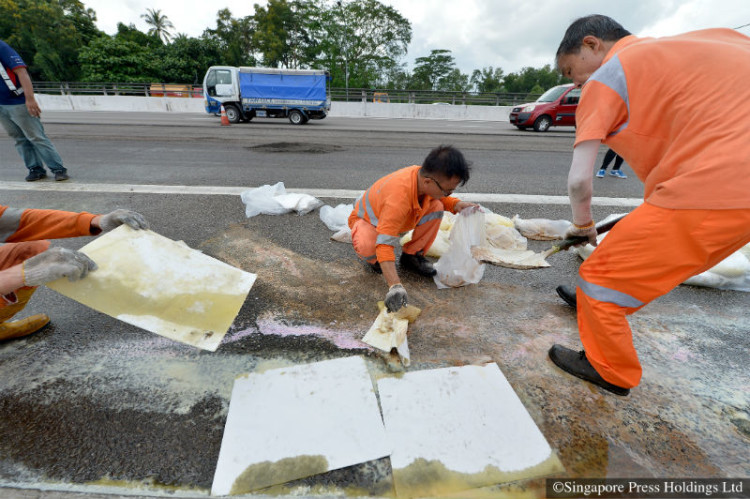 A clean-up crew removing oil from the side of the BKE earlier this year after a spill. There were 1625 oil spills last year, 28 more than in 2014.

There were more than 1,600 oil spills on Singapore’s roads last year, seven of which were so bad that they required resurfacing of the roads.

The Singapore Civil Defence Force (SCDF) and Land Transport Authority (LTA) gave The Straits Times the figures after a spate of three spills on the Bukit Timah Expressway (BKE), Pan-Island Expressway (PIE) and Kampong Bahru Road between Jan 29 and Feb 2.

All three required resurfacing, causing road closures and, in the case of the BKE oil spill, traffic congestion of up to 12 hours.

Roads are resurfaced due to the extent of damage and potential danger to motorists.

Before a road is resurfaced, various agencies, including the SCDF and National Environment Agency (NEA), will attempt a preliminary clean-up. The SCDF will first dispatch one or more fire engines to wash away the oil using water jets and bio solvents. It will also close the affected road.

If the SCDF is unable to fully flush the oil away, the NEA will provide clean-up assistance, including the use of oil-absorbent pads and oil booms to contain the spread of the spill. If the vehicle is still leaking oil, the oil will be collected in barrels.

The police are currently investigating the cause of the oil spill in Kampong Bahru Road.

In January last year, an oil spill in Paterson Road resulted in a 13-hour clean-up and resurfacing operation. A 53-year-old truck driver was arrested on suspicion of causing it.

A way to speed the clean-up process could come from the National University of Singapore (NUS).

A research team led by Assistant Professor Duong Hai Minh of the department of mechanical engineering has managed to convert paper waste into aerogels with high oil-absorption capacity.

The aerogels, which are solid, are able to absorb oil up to 90 times their dry weight. The NUS team said they are four times more effective than commercial sorbents and reach maximum absorption capacity in 30 seconds.

“Sorption has been considered one of the most effective ways to clean oil spills,” said Prof Duong. “Polypropylene-based absorbents are widely used but… their absorption capabilities are low and slow.” 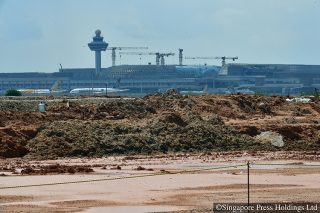 New roads and viaduct being built to serve Changi region

New roads and viaduct being built to serve Changi region