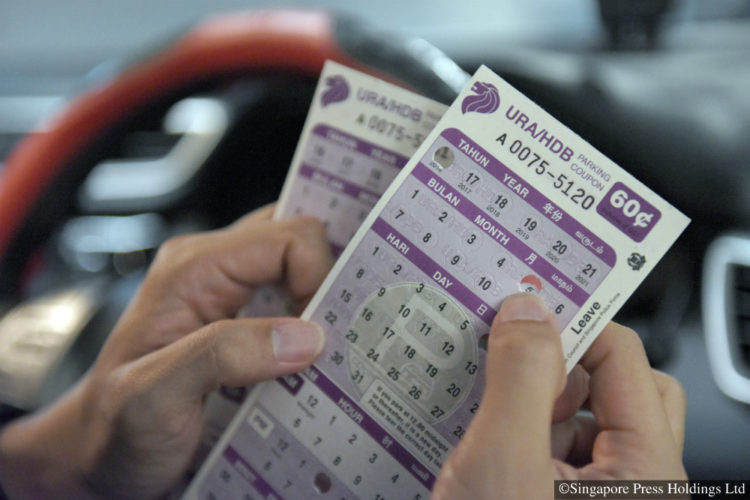 Motorists who forget to use the new parking coupons and instead display the older, cheaper ones will be given some leeway.

The authorities have told The Straits Times that offenders will be given a one-time advisory to remind them, instead of a summons. But this “flexibility” will be extended only once.

New public parking charges kicked in at the start of this month, and a last-minute rush to snap up the new parking coupons has led to stocks temporarily running out at many petrol stations. At the same time, the old coupons – such as those which cost 50 cents for half an hour of parking instead of the current 60 cents – became invalid.

When asked about the lack of stock for the new coupons, the Housing Board (HDB) and Urban Redevelopment Authority (URA) said they were extending flexibility during this initial period, but they did not say how long this would be.

“However, we advise motorists to display the new parking coupons after receiving the advisory notice so that they will not be issued with a parking offence notice subsequently,” they stressed.

Since mid-October, motorists had been able to exchange them at HDB branches/service centres and the URA Centre for newer ones by topping up the difference.

New coupons could also be bought from those places, as well as petrol stations, and Cheers and 7-Eleven stores.

But the two authorities said the volume of sales picked up sharply only in the past week, leading to coupons selling out in some places temporarily.

The HDB and URA added that the rush to exchange the coupons or buy new ones is “understandably causing a strain on counter service at petrol stations”. HDB said it was imposing a temporary limit on the number of booklets each customer can purchase at HDB branches, though it did not say how many.

Cheers Holdings, which runs 154 Cheers and FairPrice Xpress outlets, said demand has “surged over the weekend by more than six times”.

Petrol stations are also setting a cap. At Caltex and Esso, customers can exchange only up to $100 worth of old coupons for new ones. The coupon booklets are priced starting from $12, with popular denominations being the 60 cents (20 coupons per book) and $1.20 (10 coupons per book).

At 7-Eleven convenience stores located at Shell stations, each customer is limited to exchanging 30 pieces of parking coupons at one time.

There is, however, no limit on the purchase of new coupons.

A 7-11 spokesman said: ” We have been actively engaging URA to place additional orders… However, in view of the lead time needed to print the coupons, sometimes we face challenges in receiving the ordered stocks on time.”

Meanwhile, petrol stations said they were working with the URA to top up their stocks. Chevron, which markets Caltex petroleum, said stocks will be replenished across its retail network by today.

Mr Jeremy Chua, 26, a sales and marketing executive, said he drove to eight petrol stations in the Serangoon and Siglap area last weekend, but all were out. On Monday, he visited the HDB branch office in Hougang to get his coupons exchanged.

Mr Chua said of the coupons running out: “This is just Singaporean culture. People love to do things (at the) last minute.”

Retiree David Foo, 62, said of his own search for the new coupons: “It’s a bit of a hassle. They should have anticipated the high demand.”

Until Jan 31, motorists can visit any of the 131 participating petrol stations to exchange old coupons for new ones by topping up. There is no deadline to exchange or get refunds for old coupons at the 23 HDB branches, except the Tampines branch, and URA Centre.