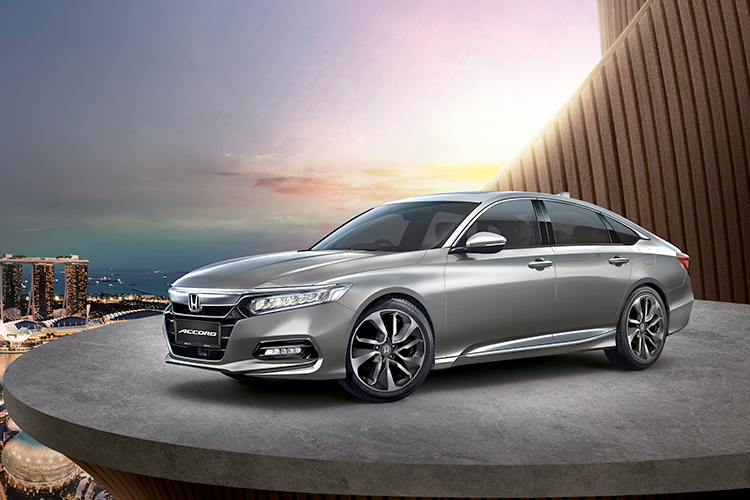 New Honda Accord is now powered by a turbocharged engine.

More details of the new Honda Accord have been confirmed by official agent Kah Motor following our report from last week.

The Accord is not on their website yet, but according to a press release, the sedan is indeed powered by a turbocharged 1.5-litre engine.

Economy-wise, the new Accord now has a combined fuel consumption figure of 15.6km/L, compared to 12.3km/L for the Accord 2.4.

The previous Accord 2.4 did the century dash in 10.5 seconds. And since the new Accord is 84kg lighter than the older one, we expect its performance times to be quicker or at least match its predecessor’s.

Official performance figures, however, are not available yet.

WHAT ELSE CAN BUYERS EXPECT?

Apart from offering more performance, the new Honda Accord is also claimed to be more spacious than its predecessor.

It has a slightly wider body and rear legroom has been increased by almost 2 inches. Honda says the quality of the materials used here has improved, too.

For added convenience, there are two USB charging points, as well as Qi wireless charging for smartphones.

SOUNDS GOOD. WHAT ABOUT SAFETY FEATURES?

Honda says that among all their models, the latest Accord has the most extensive application of high-strength steel, with 54.2 percent of the car made from it.

In fact, 29 percent of the body is comprised of ultra high-strength steel.

Honda Sensing, a suite of advanced safety features, is also standard in the new Accord.

WHAT DOES HONDA SENSING OFFER?

It’s a long list, but some of the functions are:

WHICH CARS RIVAL THE HONDA ACCORD?

The Accord has several competitors. On account of them being Japanese, the Mazda 6 2.5 and Toyota Camry 2.5 are probably its closest rivals.

There are also the Volkswagen Passat and Skoda Superb models, which are both available with turbocharged 1.8-litre engines.

New Honda Accord now available to order in Singapore