The second generation of the MINI Countryman is the biggest and most versatile model in the entire range of the tradition-steeped British brand. And another superlative now applies to the power unit of the MINI John Cooper Works (JCW) Countryman.

With an output of 231bhp, it is the most powerful engine ever to be fitted in a modern MINI. In combination with the standard all-wheel-drive system ALL4 and a robust vehicle concept, it ensures that the latest addition to the family of top JCW athletes takes the MINI experience to a whole new level – in terms of both racetrack feeling on the road and extreme driving fun over unsurfaced terrain.

MINI’s latest JCW Countryman sprints from zero to 100 km/h in 6.5 seconds with both the standard 6-speed manual transmission and the optional 8-speed Steptronic sports automatic transmission. In doing so, it is respectively 0.8 and 0.7 of a second faster than the MINI Cooper S Countryman ALL4.

The superior performance qualities of the new JCW Countryman are likewise reflected in its elasticity on interim sprints, cornering agility and deceleration performance. These qualities are the product of an overall package that has been compiled based on John Cooper Works racing expertise, including not just the engine and all-wheel-drive system, but also a sports suspension with 18-inch John Cooper Works light alloy wheels and Brembo sports brake system, special body features to optimise aerodynamic properties and cooling air intake, and a model-specific cockpit with John Cooper Works sports seats.

The exceptional standing of the new JCW Countryman within the premium compact segment is underscored by means of exclusive standard features including MINI Driving Modes, LED headlamps, Comfort Access and the Radio Visual Boost.

The new JCW Countryman is the successor to the brand’s first top athlete designed for the compact segment and fitted as standard with the all-wheel-drive system ALL4. The new car’s advancement over its predecessor is reflected not just in an output that is increased by 13bhp and the efficiency-optimised design of the ALL4 system, but also in enlarged external dimensions and a considerable increase in space, versatility and functionality.

With an addition of some 17cm in length and 3cm in width, along with a wheelbase extension of 7.5cm, space availability on the five fully fledged seats has been significantly optimised. The luggage compartment can be expanded as required from 450 litres to as much as 1390 litres.

This makes the new John Cooper Works Countryman a top athlete with all-round qualities that provides extreme driving fun and exceptional versatility – whether on the racetrack, away from asphalted roads, in everyday traffic or over lengthier distances. 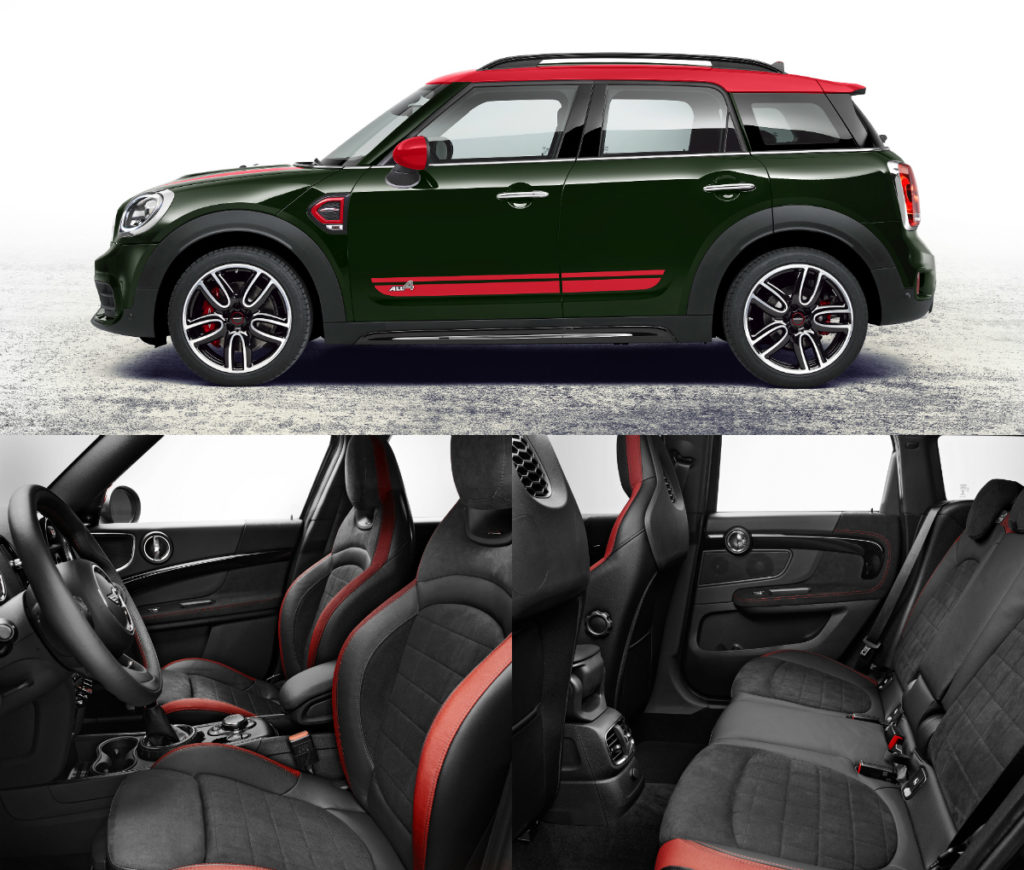 Read our review of the 2015 MINI John Cooper Works.