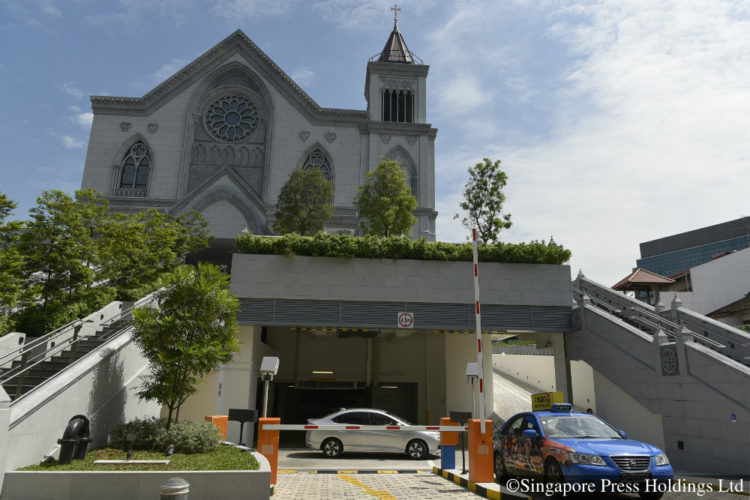 The Novena Church in Thomson Road, known officially as the Church of St Alphonsus, introduced charges for its carpark on Monday.

Worshippers at Novena Church in Thomson Road will now have to pay to park their cars there.

Known officially as the Church of St Alphonsus, the church – which reopened in September after three years of renovation works – introduced charges for its carpark on Monday to deter non-worshippers from parking on its premises.

Cars are now charged $1.50 for the first hour or less, and 50 cents for every subsequent 15 minutes, whether the vehicles belong to churchgoers or not.

Father Simon Tan, the priest in charge of the renovation project, declined to comment on the parking charges when approached by The Straits Times.

But members of the congregation said it makes sense that the church has imposed a parking fee.

Mr Benedict Lew, 55, said: “At every mass, the carpark is full, especially the afternoon masses.” The retiree has worshipped at the church since he was a child, and now goes for mass daily. He said he has seen outsiders park their cars there and go off elsewhere. “That’s what we call abuse,” said Mr Lew.

For Mr Lionel Chiong, 47, the carpark charges are necessary and he sees them as “part and parcel of the church’s building fund”.

However, one churchgoer, who wanted to be known only as Mrs Tan, said that it is “not fair” for the church to be charging worshippers.

“They should encourage people to come for mass. So during mass times, it should be free,” said the retiree, who attends mass there three times a week.

Novena Church’s move follows in the footsteps of other religious institutions that have imposed parking fees for their premises.

For St Andrew’s Cathedral, located in the heart of the civic district next to the National Gallery Singapore and City Hall MRT station, parking fees were imposed in 2011.

Its general manager Kenneth Ng said: “We have seen an improvement in the parking situation. Before 2011, we had a lot of outsiders parking here. Especially when there were events at the Padang, or during the Great Singapore Sale.”

He added that some people who work in the area would park their cars there “like season parking”.

On regular days, there are just over 40 parking spaces. On Sundays, the lawn at the side facing Raffles City is opened and there are 150 available spaces.

Mr Ng said the in-vehicle units (IUs) of cars belonging to church members are registered, so they get the member’s rate of free parking for three hours from Monday to Saturday, followed by 2 cents per minute for the next two hours and 4 cents per minute subsequently.

On Sundays, it costs members 2 cents per minute for the first two hours and 4 cents per minute thereafter. Visitors pay $7 per hour – or part of an hour – till 7pm every day, and $4 per entry after 7pm.

In Queen Street, the Church of Saints Peter and Paul has also imposed parking charges, reinstalling the carpark gantry in June last year following restoration works which ended in March.

Parish priest Edward Lim said the parking policy was implemented to discourage people from parking there. “The church grounds are for worshippers.”

The church charges $2 per half hour or part thereof. But parking is free for an hour before and after mass, including during the hour-long mass, as well as for the whole of Sunday, he added.