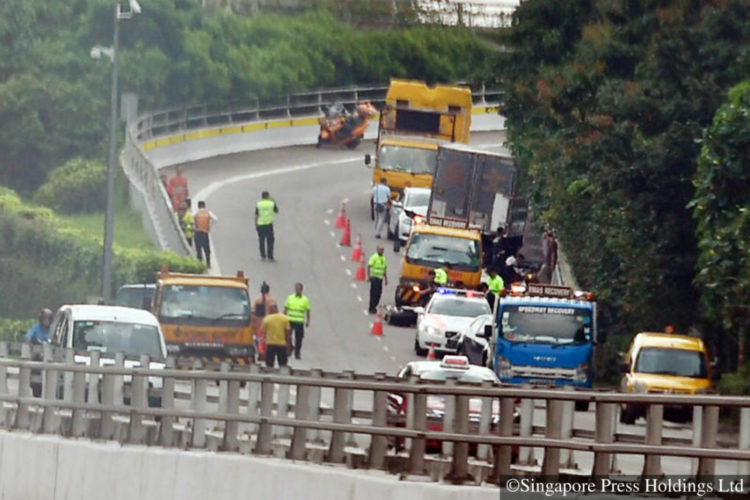 A series of accidents on the Seletar Expressway (SLE) on July 8 saw 12 people taken to Khoo Teck Puat Hospital for minor injuries.

A trailer collided with two motorcycles, resulting in oil leaking on to the road. This in turn caused 14 other vehicles – nine motorcycles, four cars, and a lorry – to skid and veer out of control.

The 34-year-old trailer driver is assisting in police investigations.

One of the riders involved in the accidents, who gave his name only as Mr Irfan, said he had slowed down on the expressway due to heavy traffic yesterday morning.

“Just when I spotted the oil on the road, around 10 cars and motorcycles suddenly skidded,” he told Chinese newspaper Shin Min Daily News. “Two of the cars hit a motorcycle in front of them, and in the next moment, another car hit me from behind.”

The 23-year-old technician injured his right leg. “I was very scared the moment I was hit. My parents were shocked as well,” he said.

Yesterday’s accidents took place at around 7.20am along the SLE, after Woodlands Avenue 2.

They happened in the area connecting to a slip road towards Bukit Timah Expressway (BKE), in the direction of the Pan-Island Expressway.

The trailer had been travelling on the left-most lane of the SLE when the driver reportedly lost control of the vehicle. It veered to the right and hit two motorcycles.

The Sunday Times understands that following the collision, the trailer started leaking oil, causing the vehicles behind to skid.

The Singapore Civil Defence Force dispatched two fire engines and eight ambulances to the scene after receiving calls at 7.20am.

A 15-second video posted on Facebook at 7.45am showed the aftermath of the incident.

The vehicles included a silver car with a damaged bonnet, a grey truck pulled up on the road shoulder, four motorcycles and another car. Two of the motorcycles were lying on their sides and damaged, and the road was wet with rain.

Around 1.25pm, the police announced that all lanes were open to traffic again.