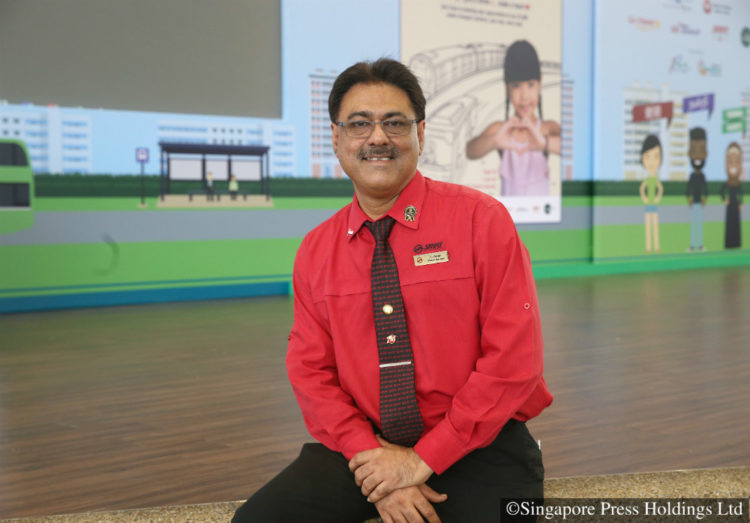 SMRT station manager Charnjit Singh (above) and another staff member were commended on Facebook for helping a woman who had fallen ill near the Lakeside MRT station in September this year.

SMRT station manager Charnjit Singh, 52, sees it as part of his duty to help improve public opinion of his employer, which has taken a hit recently over a tunnel flooding in October due to a severe maintenance lapse.

“It is our duty to change the perception of the commuters… Day to day, we make sure we make commuters happy by going the extra mile, by answering their questions and helping them with directions,” Mr Singh said.

He and another staff member were commended on Facebook for helping a woman who had fallen ill near the Lakeside MRT station in September (2017).

Facebook user Jairus Teo, who alerted SMRT staff to the woman he saw squatting at a traffic light, snapped a photo of Mr Singh and his assistant manager walking out to render help.

Showing support for the 22,000 public transport workers here like Mr Singh is what the Government, labour movement, and public transport operators are hoping to encourage, with the first-ever appreciation day held on Tuesday (Nov 14).

Transport Minister Khaw Boon Wan said at a public carnival at Bedok Town Square: “Today is a good opportunity for us all to be grateful to these silent, everyday heroes who make our daily trips possible.”

“Even a little smile, saying a ‘thank you’ through your body language, it makes a tonne of difference,” Mr Khaw.

In his speech, Mr Khaw gave the example of 67-year-old senior bus captain Chua Cheng Chuah, who is so familiar with his passengers that they even buy medicine for him, after he fell sick and did not drive the route for a few days.

Mr Chua, who has been working for SBS Transit for 48 years, said: “I didn’t think they would do that, and show such concern.”

“They are like friends and family. Everyday, we will also greet each other on the bus. I feel it a joy to drive,” Mr Chua said in Mandarin during an interview.

While the daily grind of driving buses or assisting train commuters is not easy work, those working in the public transport sector say it’s not a thankless job.

Mr Singh, who has been with SMRT for 30 years, said helping passengers gives him a “sense of satisfaction”.

Ms Gena Goh, 25, a service controller with Tower Transit Singapore, said having an appreciation day is a good idea, as it also gives the public a better sense of the behind-the-scenes work involved in the industry.

Ms Goh, whose job is to monitor and direct buses on the roads so they arrive on schedule, said: “Our job is not very recognisable by the public. It’s a good thing they have this appreciation event.”

Go-Ahead Singapore’s Muhammad Azan Jamalludin, 31, a technical officer, said he joined the industry as he found it challenging.

While he has to work graveyard shifts, Mr Azan said he derives satisfaction from rectifying problems with buses, and keeping them maintained and road-worthy.

And as no two buses or problems are alike, “everyday is a different challenge”, he told The Straits Times.