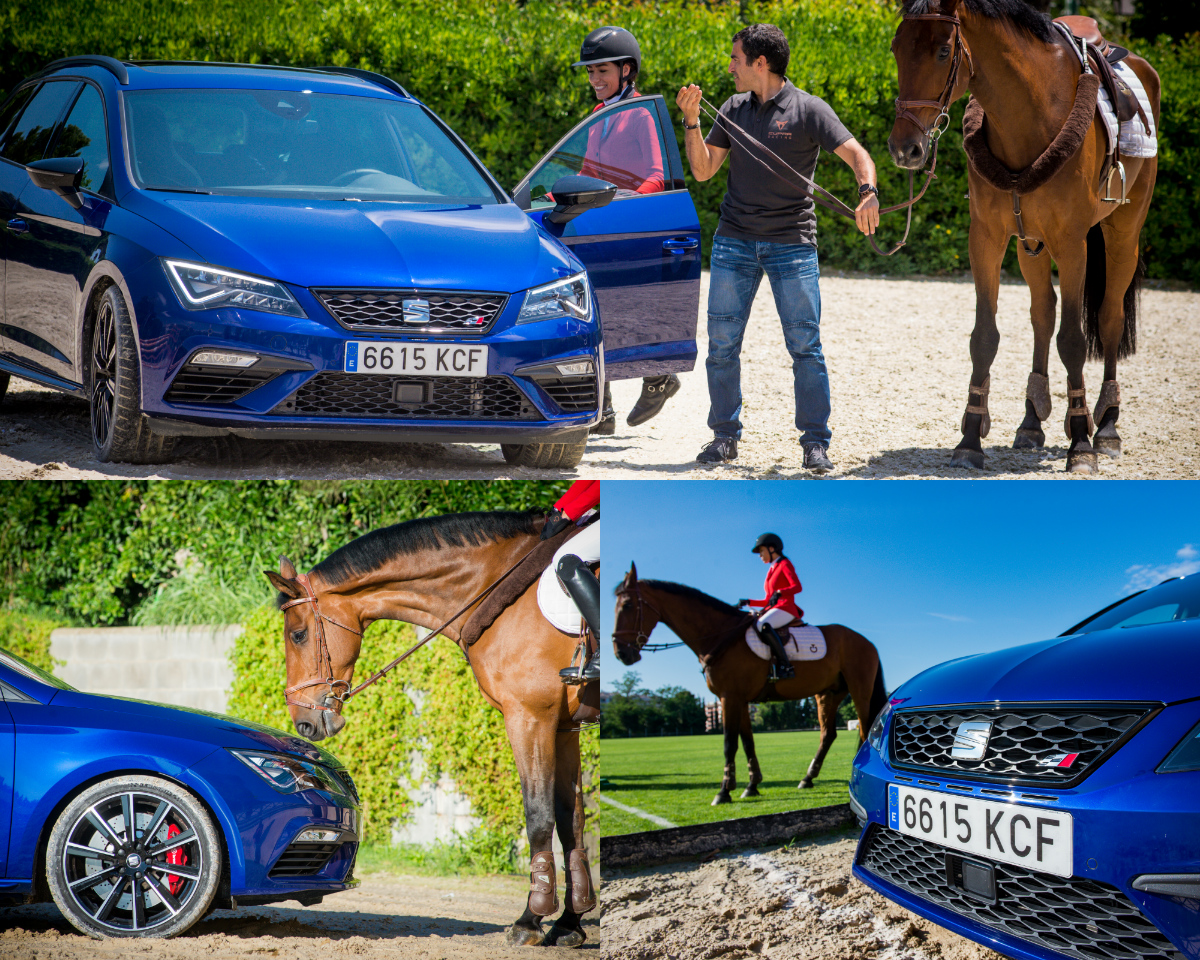 The Spanish hot hatch, driven by racing driver Jordi Gene, measures up against a German horse called Calgary, a competition show jumper with professional rider Virginia Graells in the saddle.

Force, strength – these are just two of the characteristics that can be ascribed to the Seat Leon Cupra and to the show jumper Calgary. Steered and led respectively by racer driver and Cupra ambassador Jordi Gene, and professional rider Virginia Graells, they meet up at Barcelona’s Royal Polo Club for a twin challenge – a speed race and an obstacle course.

Virginia Graells was a member of the Spanish team of young riders and competed recently at two international championships at Barcelona’s Royal Polo Club. She says that ever since she mounted her first horse when she was 14, she’s “never been afraid”. The same goes for Jordi Gene, who became Spain’s youngest Formula car champion when he was just 16 – “You can’t be afraid or falter for even a second. If you do, you’ll never be able to compete.”

Calgary is nine years old and comes from Germany. With his impressive 500kg frame, he is able to reach 70km/h. Where does his strength lie? Virginia Graells certainly knows. “He’s a jumping horse and therefore extremely agile and skilled; he’s very accurate and doesn’t knock down any rails”, she explains.

On the other hand, the Seat Leon Cupra draws its power from its 300hp 2.0 TSI engine. “The best thing about it for me is its resilience after making quick manoeuvres. It’s very dynamic and agile, which enables you to quickly gain a lot of speed”, says driver Jordi Gene.

Virginia always makes an initial contact with Calgary in the stables. “I pat him on the back and treat him to a sugar cube before mounting. I also make sure that his bridle and saddle are firmly in place”, explains Virginia.

Likewise, Jordi Gene examines the Seat Leon Cupra and inspects the track. “In this case, the terrain is sandy and unconventional. I also check the surface of the tyres to get an idea of how the car is going to respond”. Before the race he shares his ritual with us – “I always get in the car with my right foot first. I’ve been doing this since my very first competition”, he admits.

The car and the horse begin the face-off by taking their positions at the starting line. Standing side by side, Calgary is going to gallop straight across the polo field while the Cupra heads down the sandy track.

Calgary takes off and covers the 100-metre distance in 15 seconds. The Leon Cupra crosses the finish line in just under 4 seconds, reaching a speed of 100km/h.

“Even though I was competing on a very soft, sandy surface with the odds unevenly stacked against me, the car handled magnificently. Thanks to its 300hp engine and 4Drive traction, I won the speed challenge”, says Jordi.

On the next track, the competitors are faced with an obstacle course. Calgary has to jump over all of them without knocking down any rails, while the Cupra has to go around them.

Thanks to Virginia’s riding skill and her horse’s training, they clear the 2-metre high obstacles in 57 seconds. To his credit, Jordi Gene takes a slalom approach, driving around the hurdles at 80km/h to finish the course in 31.43 seconds.

“There wasn’t much room to manoeuvre the turns, so I cut it close making it around the obstacles. But thanks to the chassis of the Seat Leon Cupra, I was able to change directions very quickly”, he concludes.

At the end of the challenge, they declare the outcome a draw. For a short time, Virginia and Jordi decide to reverse roles and their rides, although they both seem to prefer their original steed.

“This car gives me a special vibe and warmth; it gives me an adrenaline rush and enables me to take control”, says Jordi. Virginia also saddles up to return to the stables – “At full gallop I get a unique feeling of freedom and connection with my horse. Today I’m going to treat Calgary to a double helping of carrots and apples.” 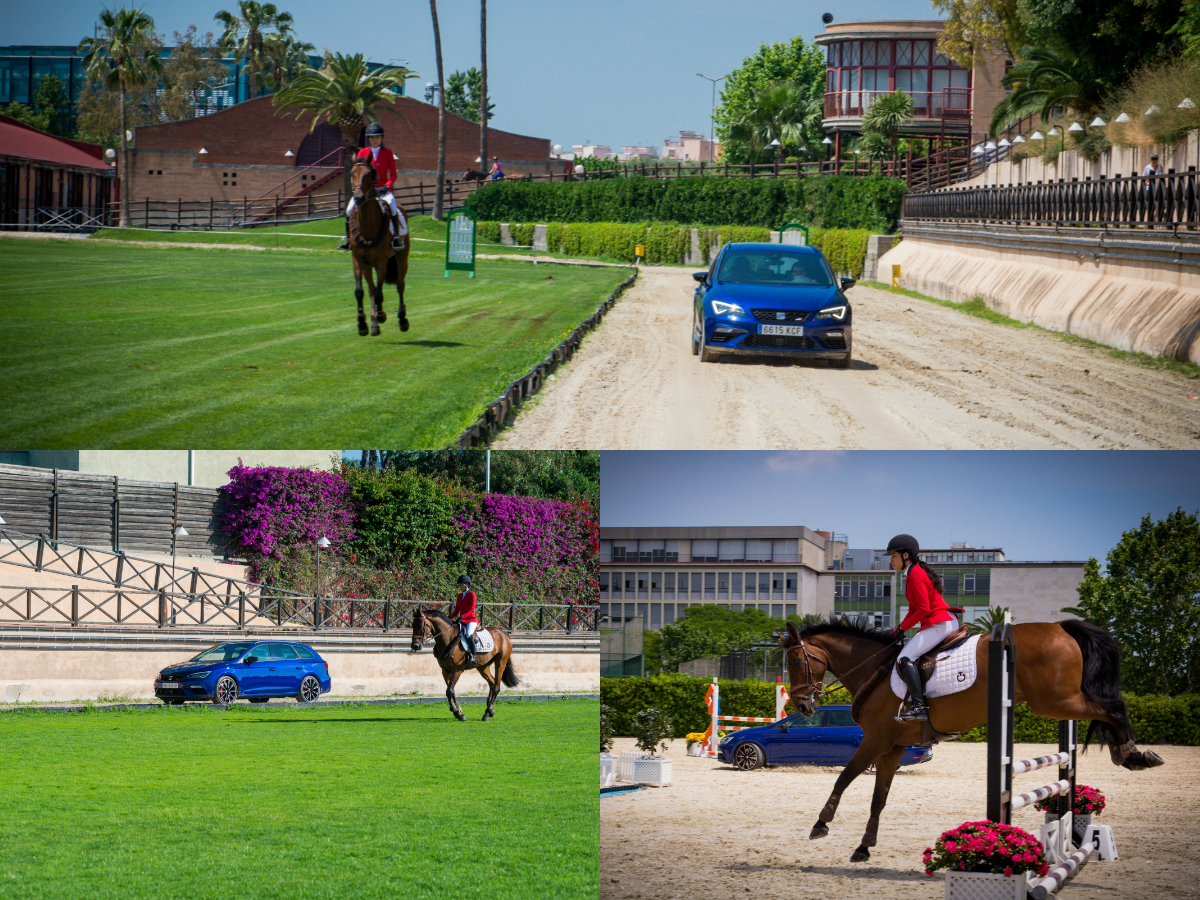 The Spanish hot hatch, driven by racing driver Jordi Gene, measures up against a German horse called Calgary, a competition show jumper with professional rider Virginia Graells in the saddle.