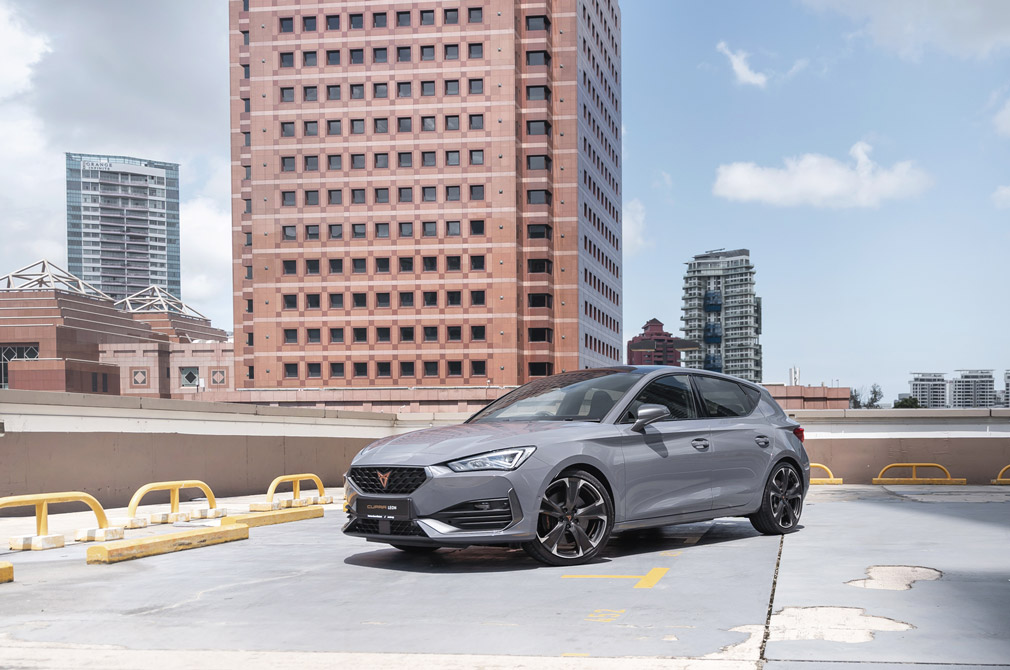 The undisputed standard bearer in the hot hatch segment is the Volkswagen GTI. It is not the fastest in the class, but it is an all-rounder that most boyracers would have yearned to own at some point of time.

This desirability did not diminish when Spanish carmaker Seat returned to Singapore in 2016 and the local agent Vertex Euro Motors brought in the Leon Cupra, which is the rival to the GTI.

This was because Seat was absent in Singapore for some 13 years and the brand does not quite have the same sheen as the ubiquitous VW.

The “Spanish GTI” now gets another shot at dethroning its German rival: The eighth-generation VW GTI was launched in May and the fourth-generation Cupra Leon followed one month later.

The car is now the Cupra Leon, not Leon Cupra. The name has been flipped to emphasise the Cupra brand, which was spun off in 2018 from its Spanish parent to be an independent arm focusing on performance models.

There are two versions of the Cupra Leon on sale here: a five-door hatch and Sportstourer (ST) wagon. 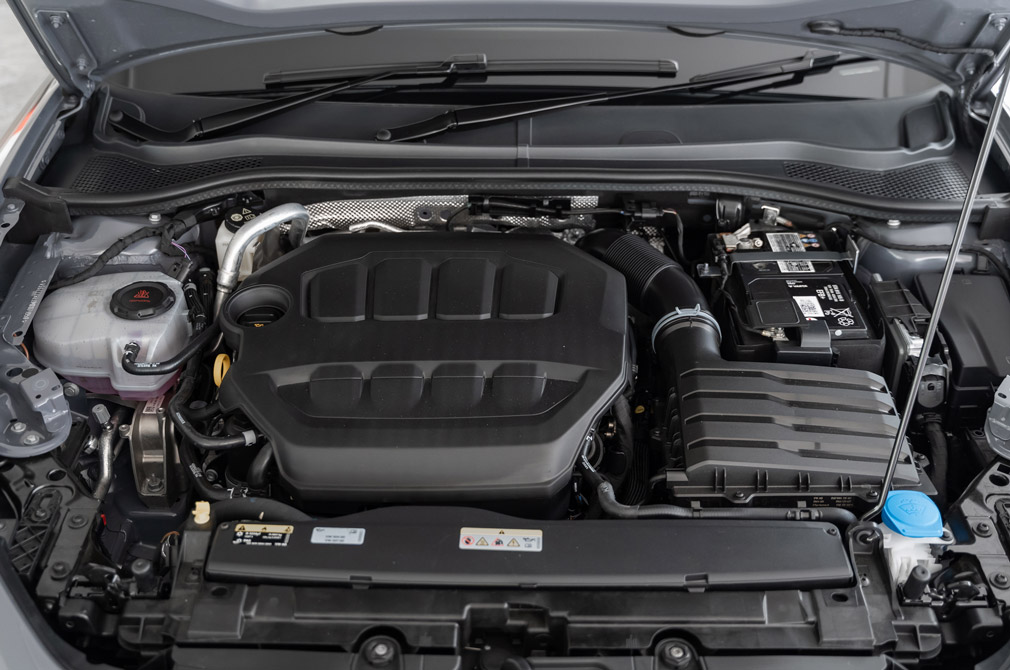 Three versions of the Cupra Leon hatch are sold internationally – a flagship 300hp version, a mellower 245hp one and a 1.4-litre plug-in hybrid.

The local agent has brought in only the flagship version, which is powered by Volkswagen’s famed EA888 engine paired with a 7-speed dual-clutch gearbox.

Power is sent to the front wheels and the car hits 100km/h from standstill in a sizzling 5.7 seconds. This is faster than the GTI’s 6.4 seconds.

It is a smart move to bring in the top-tier car. The car matches the Golf R in terms of performance, less the four-wheel-drive, but it is priced at about the same as the GTI.

This means that buyers who do not mind not having the hallowed GTI badge can get more bang for the same buck.

On the move, the Cupra Leon hatch is a pocket rocket: throttle response is instant, gearshifts are crisp and the steering is razor sharp without being twitchy. 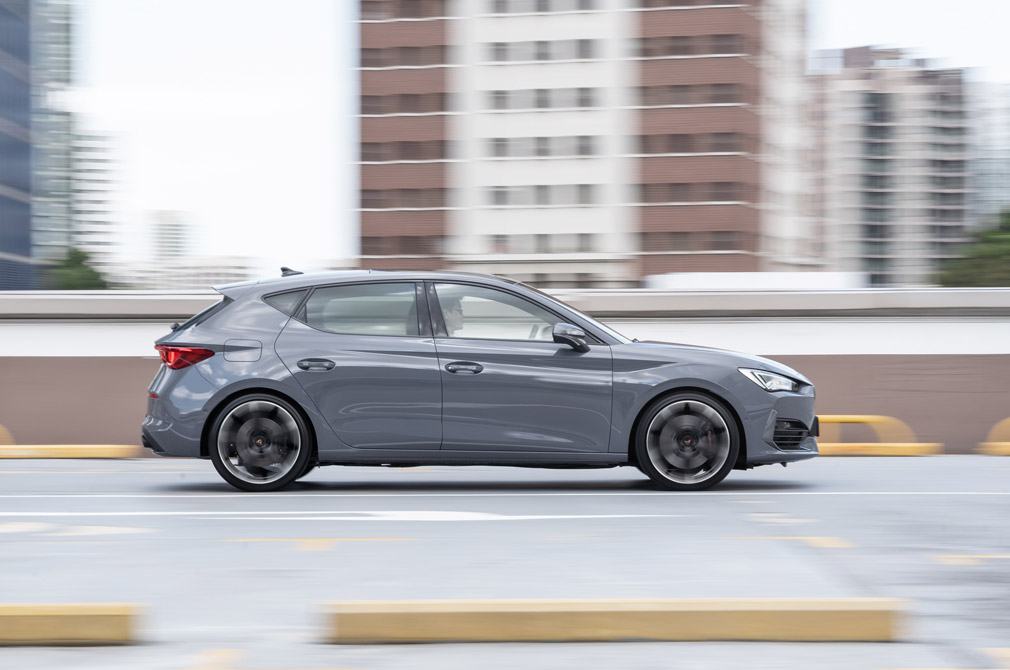 The star of the car is its versatile personality. There are three main drive profiles: Comfort, Sport and Cupra (or race).

The variables can be further personalised through the individual mode. My favourite mix is Sport mode, but with the Cupra engine sound track for aural pleasure.

Overall, it is effortless to pilot the Cupra Leon hatch, even for those new to hot hatches. In Comfort mode, the car has an easy-going demeanour that is no different from any family car.

It rained during my test drive and I experienced some wheel spin and a hint of torque steer on hard throttle. This means that enthusiastic drivers have to ease off, just a little bit, when the roads are wet.

The test car averages 10.4km/litre, lower than the stated 14.9km/litre. 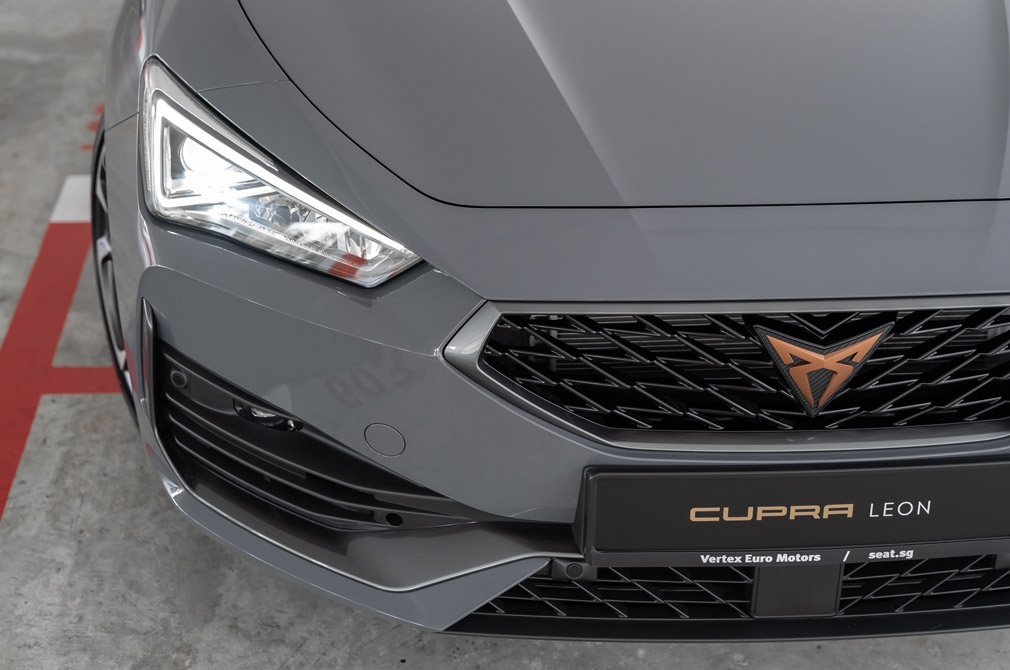 The Cupra Leon is recognisable for its bold styling. The car looks like it comes from the movie set in the Transformer movies, wearing a logo that looks like an Autobot.

It looks assertive, even aggressive, with the bold front grille, large air intakes and front wing.

This aggression continues to the sides of the car with the side skirts and the rear bumper, which houses tailights with dynamic turn signals and full-width lights that are fast becoming popular.

The quad exhaust, diffuser and spoiler collectively give the car a distinctive hot-hatch rear styling.

There is no Seat badging anywhere outside the car, reinforcing the Cupra’s status as a standalone brand. 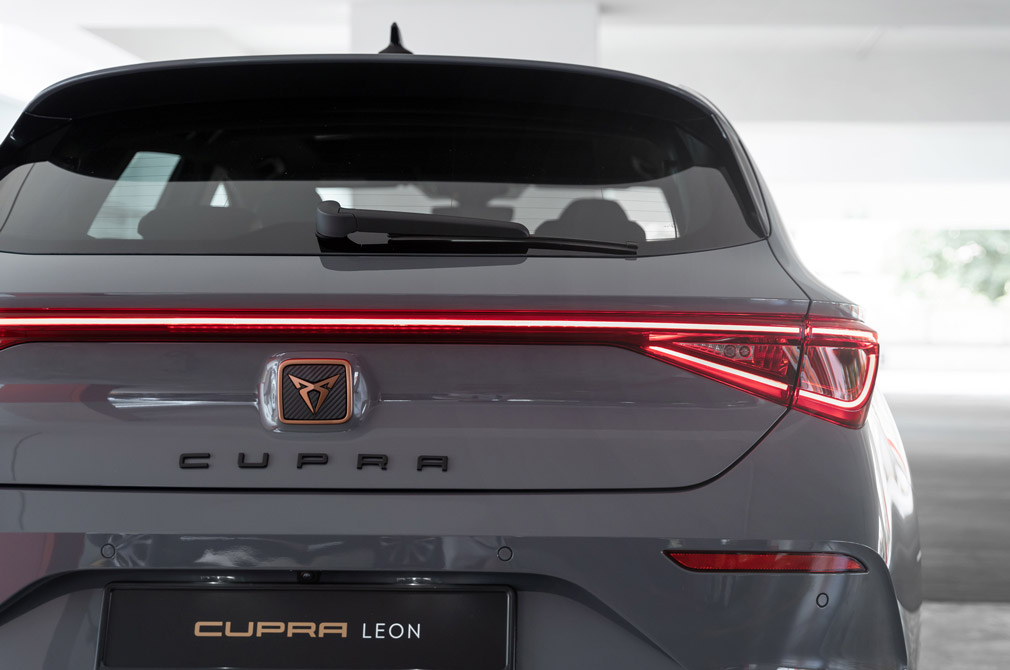 Inside, the Cupra Leon is not short of amenities found in premium cars.

The two features that I enjoyed most visually are the 10-inch touchscreen and a 10.2-inch digital instrument display.

The touchscreen has replaced most buttons and dials, giving the centre console a decluttered look, whereas the digital instrument display can now be customised to show the driving data in different ways.

The decluttered look is accentuated by a rocker switch that is about the size of a car key, which replaces the transmission shifter as the VW-family of cars, including the Cupra, move to shift-by-wire technology.

If the car’s pops and crackles from the exhaust are not enough to satisfy drivers, the car’s Beats audio system, complete with amplifier and subwoofer, will please audiophiles.

And like most modern cars, the Cupra Leon is smartphone ready, with wireless charging, Android Auto, Apple CarPlay and built-in navigation as standard. 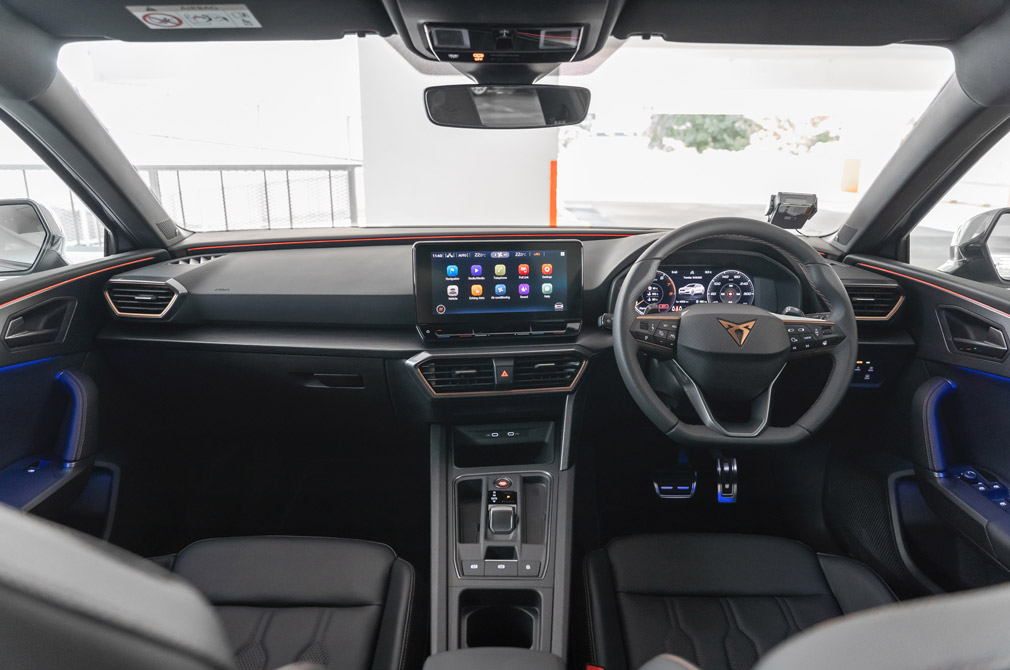 The Cupra Leon may be fast, but it is also safe.

Besides the usual count of airbags (seven) and traction control systems, it has blind spot warning, lane-keeping assistance and rear cross traffic warning when reversing the car.

It even has self-parking, which novice drivers will find appealing.

Also adding to the Cupra Leon’s appeal as a family car are the memory driver’s seat for the multiple drivers in the family and air-conditioning for rear passengers. The 380-litre boot, which is identical to the Golf’s, is more than ample for a family car. 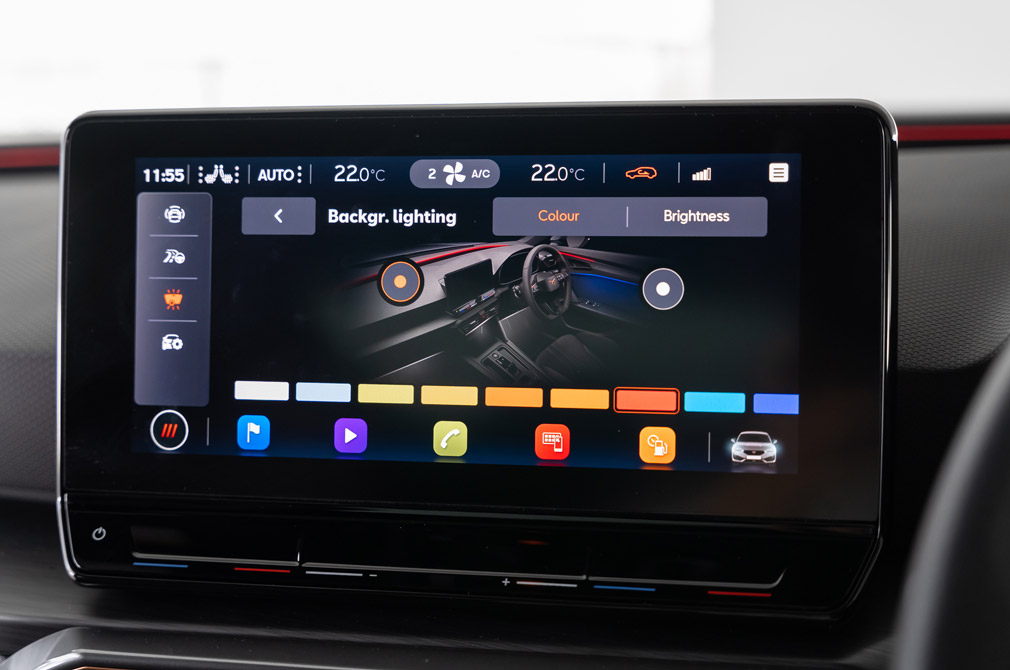 THE BEST $200k CAR FOR ENTHUSIASTS

The Cupra Leon may have started life as an alternative to the signature VW GTI, but it has since carved out its own space.

At that price, one can buy a VW GTI ($204,900), but it means trading badge appeal for some performance, or a Renault Megane RS ($208,999), which is subjectively more left-field considering that the Cupra Leon has a more mainstream VW DNA.

Even outside the hatchback class, cars like the facelifted 2-litre Kia Stinger ($203,999) may offer more space or the Lexus IS300 ($221,800) more refinement, but they do not come close to the handling and performance of a hot hatch that enthusiasts want.

In other words, while there are many options for car buyers at the $200,000 price point, the Cupra Leon stands out as an all-round performance and practical car that can easily hold its own whether for school and grocery runs, or zipping round a race track.

In other words, it is more than just a Spanish GTI. 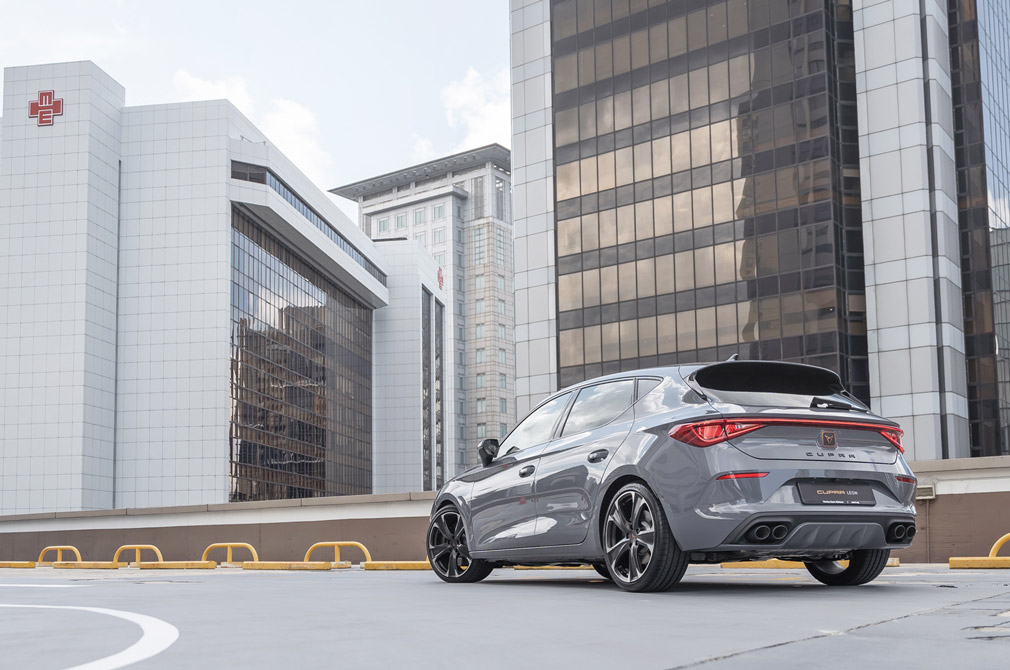