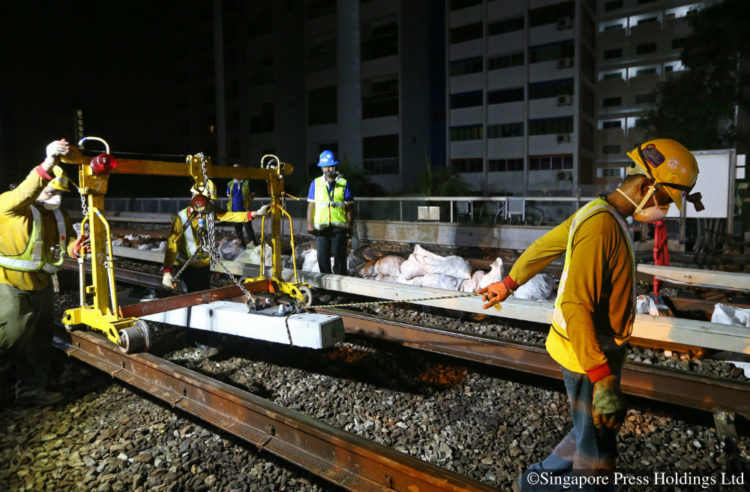 Workers replacing older timber sleepers with hardier concrete ones on the East-West Line last November. The four-year project to upgrade the sleepers on the North-South and East-West lines was completed last month.

Disruptions on the East-West MRT line earlier this month were caused by faulty track circuits, and not by the new set of sleepers, SMRT said yesterday.

The rail operator also assured commuters that such disruptions will be moderated when a new signalling system comes online by the end of next year.

The four-year project to upgrade sleepers on the North-South and East-West lines, from older timber sleepers to hardier concrete ones, was completed last month. It was supposed to bring smoother and safer rides.

Track circuits are integral to the signalling system, said SMRT, as they send signals to the operations control centre to monitor the speed, location and identity of trains. “When a track circuit fails, trains have to travel at a lower speed over the affected stretch for safety reasons,” said the rail operator, adding that the slower speeds caused congestion during peak hours.

The failure could be due to equipment failure either at a signal equipment room within an MRT station or at trackside, SMRT said.

While a hardware failure in the signal equipment room can be quickly rectified, engineering staff must go to the track to investigate trackside failures. This can be “very challenging” when the track is on a rail viaduct, particularly in heavy rain or when there is risk of lightning.

More than 85 percent of signalling upgrading works on the East-West Line have been completed. The new system is expected to increase train frequency as it will allow trains to run at intervals of 100 seconds, instead of the 120 now.

Earlier this month, the Land Transport Authority said that the new signalling system on the North-South Line will begin operating in March during the off-peak periods.

In a blog post last month, SMRT Trains managing director Lee Ling Wee said that a third of train delays that lasted more than five minutes last year on the East-West and North-South lines were signal-related.