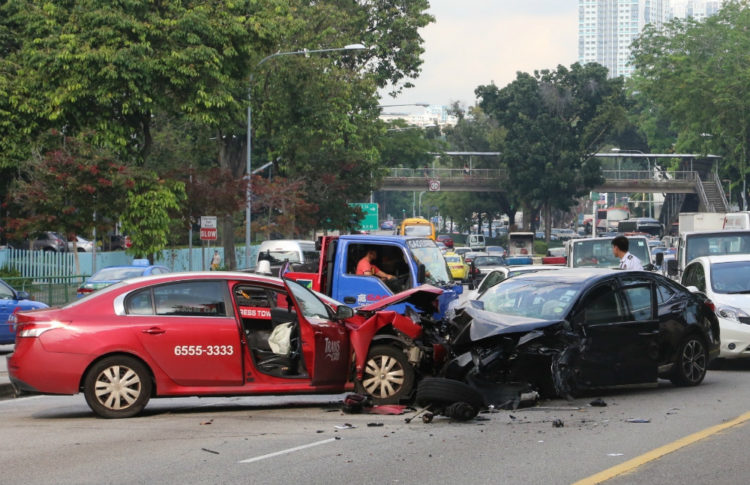 Four people were injured in a three-car collision along Ang Mo Kio Avenue 3 on Tuesday (May 2) morning.

A taxi collided with two other cars after reportedly driving into the road divider at Ang Mo Kio Avenue 3 on Tuesday (May 2) morning, and three people were taken to hospital.

The police told The Straits Times that they were alerted to an accident involving three vehicles along Ang Mo Kio Avenue 3, towards Hougang Avenue 2, at 7.36am.

A Transcab taxi lost control and hit the road divider, before lurching in the opposite direction and colliding with two cars, Lianhe Wanbao said in a report on Tuesday.

Pictures of the accident show a black car with its front wrecked and a wheel dislodged from the impact. The front of the taxi is badly damaged, too, while a silver car appears to have received the least damage.

ST understands that four people were injured but three were taken to hospital.

The driver of the silver car was a woman who had just dropped off her sons at primary school. Her husband, who gave his name only as Mr Chen, 37, told Lianhe Wanbao that she received injuries to her neck, hands and back.

“My wife had just taken our two children to school. When the accident happened, they were not in the car,” he said.

He added that his wife’s injuries were not that severe, and that it was fortunate that the boys were not in the car.

A spokesman for the Singapore Civil Defence Force (SCDF) told ST that it was alerted to the accident at 7.42am and dispatched two ambulances, which took three casualties to Tan Tock Seng Hospital.