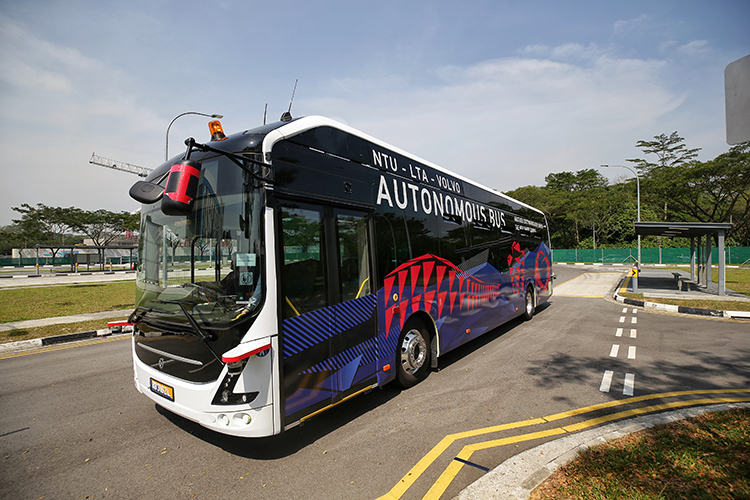 The NTU-LTA-Volvo Autonomous Bus running on a purpose built track at Cetran on Mar 4, 2019.

Road users near Nanyang Technological University (NTU) could see a driverless bus on the road later this year, as autonomous vehicles edge closer to becoming a viable form of transport.

NTU and Swedish firm Volvo have launched a 12m-long driverless electric bus, which they say is the world’s first.

The bus, which can fit about 80 people, has gone through multiple tests at the Centre of Excellence for Testing and Research of Autonomous Vehicles – NTU (Cetran), and is now ready for tests in actual traffic conditions.

It is able to travel 25km on a full charge.

Through a 300kW fast charge system from engineering giant ABB, the driverless bus can be charged to full capacity within six minutes.

At an event unveiling the bus on Tuesday (March 5) at Cetran, NTU president Subra Suresh said: “This fully driverless electric bus will play a role in shaping the future of public transportation that is safe, efficient, reliable and comfortable for all commuters.

“This research project not only involves cutting-edge science, technology and artificial intelligence, but is also an excellent example of close partnership among academia, industry and government agencies in translating basic research into products and services for the benefit of Singapore and beyond.”

Mr Lam Wee Shann, chief innovation and technology officer at the Land Transport Authority (LTA), said the launch of the bus for on-road trials marks an “important milestone” in the joint project between LTA and NTU to develop autonomous buses for fixed route and scheduled services.

The partnership was previously announced in October 2016.

“(The autonomous bus) is in line with Singapore’s vision of deploying autonomous vehicles to improve accessibility and connectivity for commuters,” he said.

“We will continue to work closely with NTU to facilitate the safe and robust testing of the autonomous vehicles.”

The driverless bus is equipped with Global Positioning System antennas, lidar (light detection and ranging) sensors and stereo-vision cameras that record a three-dimensional view of the surroundings.

Inputs from these sensors are combined and managed by an artificial intelligence system developed by a 23-man team at NTU.

The system then determines the bus’ position to as accurate as 1cm of its actual location.

This platform is built into a 2m-tall container that is placed in the bus and is protected with cyber-security measures.

Speaking to The Straits Times on Monday, NTU’s Energy Research Institute executive director Subodh Mhaisalkar said the driverless bus is classified to have near Level 4 autonomy.

Level 4 is when a vehicle can drive by itself but is still manned, while Level 5 is the highest level of autonomy when the vehicle can operate on its own with no one on board.

To reach full Level 4 autonomy, the bus will have to be tested in residential areas and in mixed traffic conditions with other vehicles.

Prof Subodh said the mixed traffic demonstration will be done on the NTU campus later this year, and plans are in place to extend the tests to the route between the university and the nearby Pioneer MRT station.

There are two such buses, which were provided by Volvo in 2018 as part of a partnership with NTU.

Autonomous public bus to be launched by 2020

The on-the-road trials will start later this year, with one driverless bus to be tested at the university without any passenger pick-ups.

The other driverless bus will be trialled at an SMRT depot to check if it can navigate itself into washing bays and park at charging stations.

One goal for the NTU-Volvo team is to be one of the successful tenderers for the Government’s plans to have autonomous vehicles in Punggol, Tengah and the Jurong Innovation District from 2022 for commuter use.

Prof Subodh said the team is excited about the potential of the NTU-developed platform.

“It’s a platform technology that could be used for other types of vehicles… Potentially, it could also be used for transportation on the sea,” he added.

“This is a platform that will catalyse other driverless applications.”