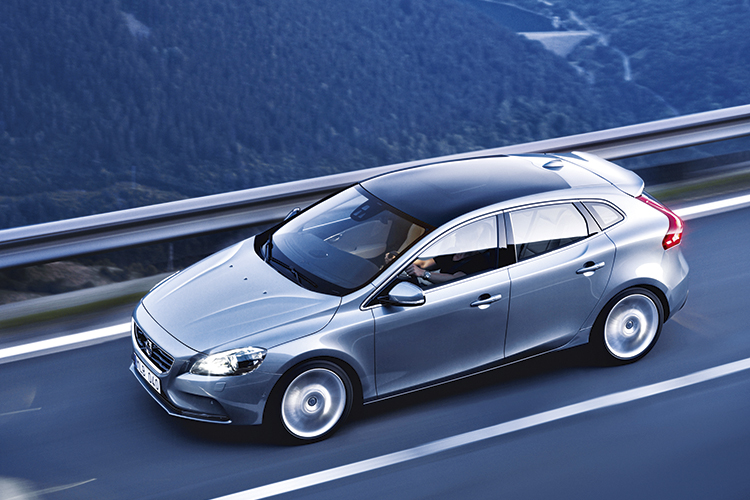 First and foremost, this Swedish newcomer is not a 2012 reboot of the old V40 station wagon, produced in a joint venture with Mitsubishi between 1995 and 2004. The new V40 is not even an estate, despite using the same “V” prefix (for “Versatile”) that denotes Volvo wagons, namely the V50, V60 and V70. It is actually a five-door hatchback competing in the same crowded segment as the Mercedes A-Class, Audi A3 and Volkswagen Golf. It is also the first Volvo model to be released under Geely, the Chinese automaker that acquired the Swedish marque from Ford two years ago.

The new-wave V40 supersedes both the C30 and the S40, with a crossover version called XC40 replacing the V50. Made in the same Belgium factory as its recently retired forerunners, the new V40 uses an improved S40 platform jam-packed with the latest features – the most impressive of which are safety-related, of course.

The fanciest safety gadget is a pedestrian airbag. Of the V40’s eight standard airbags, this is number eight – a lucky numeral for the Chinese, but it’ll be an unlucky pedestrian who crashes into the car and lands on the U-shaped bag. 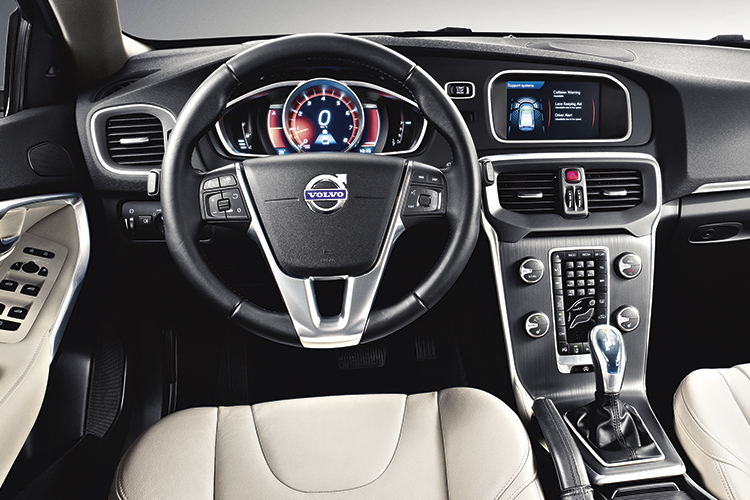 This Swedish-style, people-centric interior design at its safest and “youngest”.

The V40 is so safety conscious, it even practises safe sex – in its styling. It has sexy curves everywhere, from the V-shaped bonnet to the hexagonal tailgate, the latter crafted to mimic the all-glass tailgate of the C30, which was in turn inspired by the classic P1800ES. Also looking good are the tail-lamps, similar to those on the V60 fashion wagon.

To me at least, the most interesting aspect of the V40’s exterior isn’t the swoopy sheet metal but the bonnet’s washer nozzle stubs – because there are three instead of the usual two. The one in the middle is needed to dispense an accurate spray of washer fluid over the laser/camera array above the rear view mirror (frameless if you wish), with the other two sets of nozzles spraying the rest of the sharply raked windscreen, which happens to be Volvo’s rakiest yet.

From behind the wheel, those swept-back A-pillars compromise lateral visibility somewhat. The ergonomics is otherwise excellent, with superb seats that support the torso and thighs comfortably, and headrests that let your head rest well. Upholstery colour choices include azure blue and espresso brown, while the centre stack (Volvo’s signature ultra-slim console) can be decorated with wood, aluminium or “Centre Court” (tennis-inspired trim). 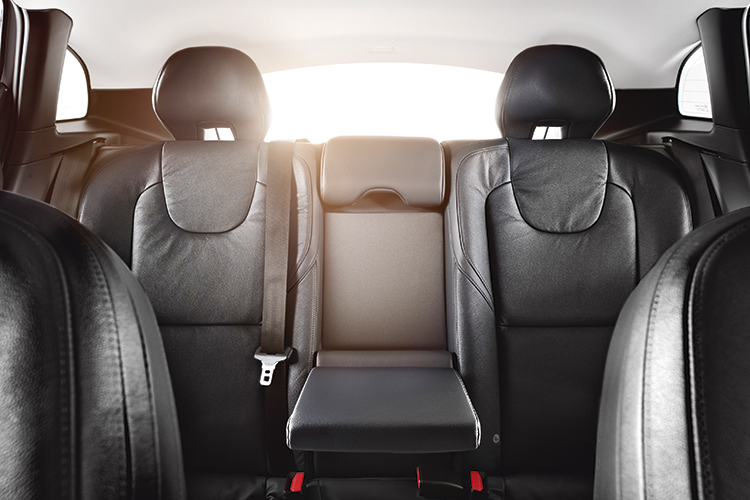 Volvo’s most compact car is roomy enough for four, but a bit tight for five.

You can even watch a Wimbledon match if you order the built-in digital TV. Other extra-cost options include a 10-speaker hi-fi (a softer eight-speaker system is also available), a 7-inch infotainment colour screen (it’s 5-inch for the basic model) and a panoramic glass roof (with a powered fabric curtain that, thoughtfully, opens from the rear). The killer app, though, is the TFT graphic instrument cluster.

For around the same price as the rear park assist camera, you get a nifty digital display that not only looks high-tech, but is also customisable by the driver. He can easily select one of three themes – Elegance (straightforward layout with amber illumination), Eco (green backdrop with a dedicated eco-driving meter on the left) and Performance (red background with a tacho smack in the centre and a power gauge on the right). All the visuals are crystal-clear, and the change-over from one theme to another is slick. The V40s slated for Singapore are likely to have this fantastic feature as standard equipment. 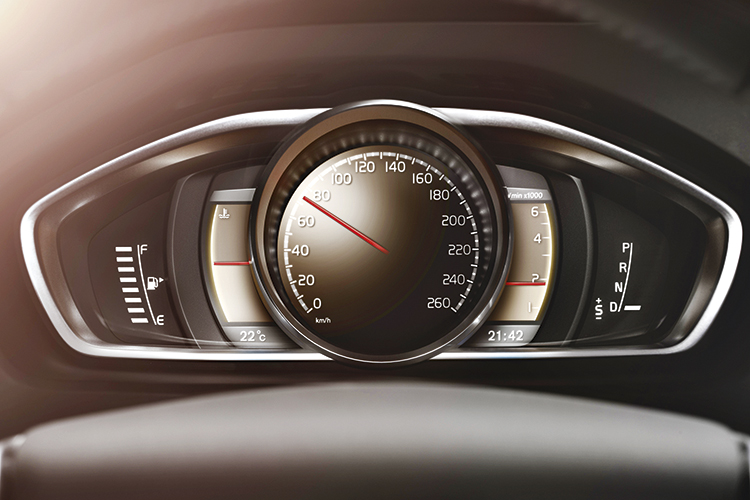 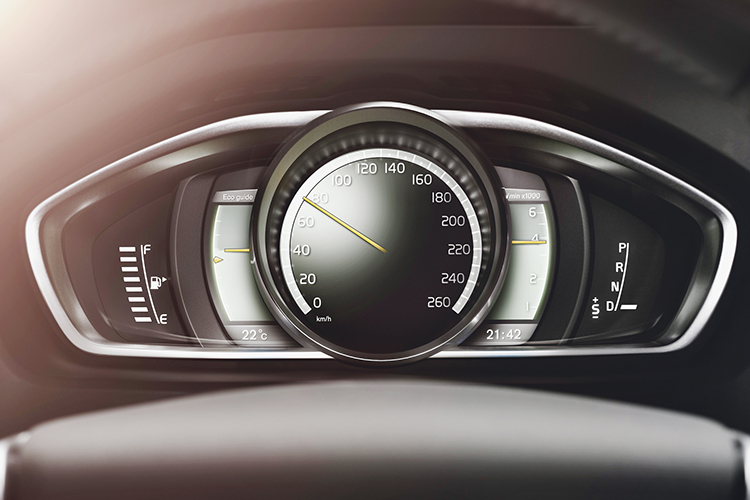 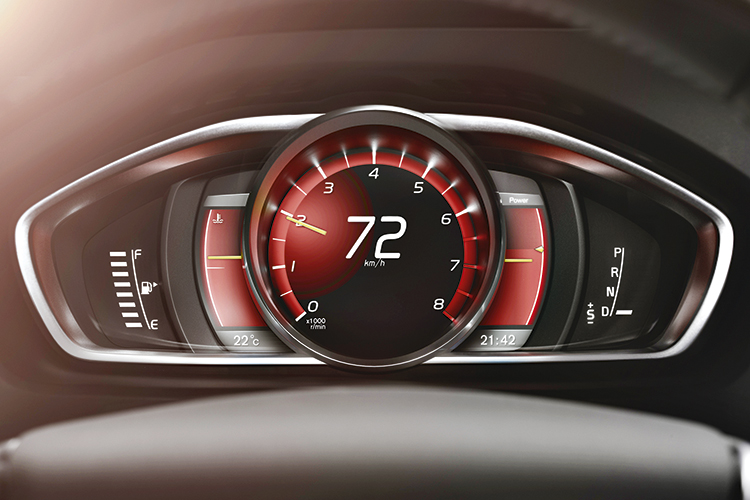 These “magic” meters are a unique selling point for the V40, and you don’t have to be geeky to like them.

The cabin’s captivating light show doesn’t end there. The LED ambient lighting offers seven “temperatures”, including Frosty White, Violet Purple and Ember Gold, while the transparent auto gear knob is LED-illuminated from the inside to create a slightly cheesy 3-D effect.

Said knob controls a 6-speed dual-clutch gearbox (Ford’s Powershift), which delivers power from a turbocharged 1.6-litre 4-cylinder in two states of tune – 150bhp for the T3 and 180bhp for the T4. The same drivetrain is used in the S/V60, but a software update has made the transmission even smoother than before, especially when it’s shifting down through the ratios as the V40 comes to a stop. Volvo still persists with its “no paddle-shifters” policy, so the V40 steering doesn’t have any. But with “D” so responsive and precise in its swopping of gears, a pair of paddles would probably be superfluous.

Volvo’s most compact car is roomy enough for four, but a bit tight for five.

I play with the well-shaped lever anyway and find that in DIY mode, the dual-clutch tends to change up slowly at low speeds (perhaps to keep the proceedings smooth), only increasing the tempo at high speeds.

Regardless of speed, the T4 turbo doesn’t sound very sporty, apart from a subtle burble from the exhaust on full-throttle upshifts. More importantly, the way the engine piles on the revs and pulls the car is athletic, belying its mere 1.6-litre capacity. Whether merging with the 130km/h flow of traffic on the autostrada or overtaking slower vehicles at 150km/h, the V40 delivers without hesitation. 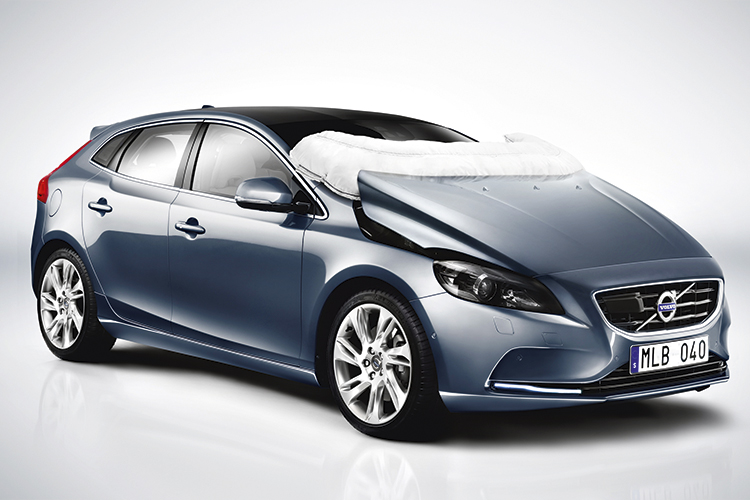 The 2012 Volvo V40’s headline feature is a pedestrian airbag. In the event of a collision with a poor pedestrian, this technology deploys an external airbag at the base of the windscreen that also raises the rear end of the bonnet by 10cm, cushioning the human crash test dummy and reducing the severity of his injuries.

And it handles in a neat, predictable manner on its 225/40 R18 PS3s, especially with the firmer and 10mm lower Sport suspension (confusingly, Volvo calls the standard setup Dynamic). The electric power steering is an agreeable system, with a three-mode pre-set for the effort needed (and inversely, the level of motor assistance) to twirl the wheel – Low, Medium or High.

Cruising on the Italian highway, the V40’s ride is controlled yet compliant, without much road noise and negligible wind noise. Doing a hurried 120km/h in the V40 feels as relaxed as doing 80km/h in an S40. Driving downtown in Verona, however, the Volvo is upset by larger manhole covers and harsher patches of tarmac. It’s not exactly “crashy”, but it can get rather jarring if the cabin occupants are sensitive. Thankfully, the bodyshell seems tight and vibration-free. 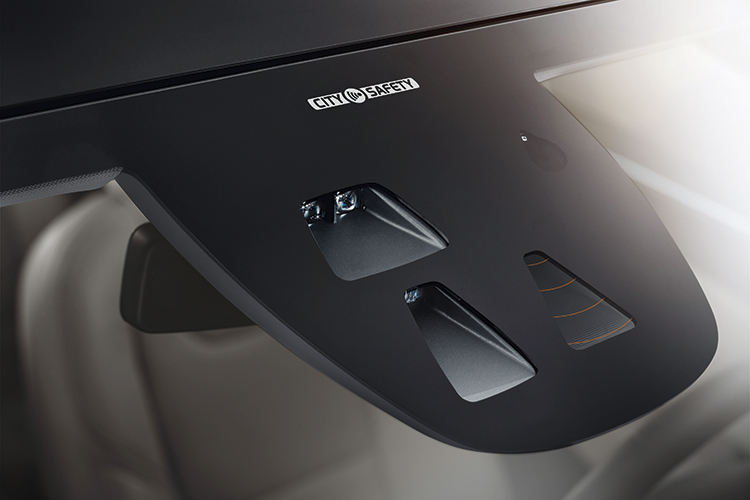 Camera lens and laser sensor are nestled above the rear view mirror.

This tightness is evident from the back seat, where the passengers sit marginally higher than the one in front. Squab support is good, with adequate space for two pairs of legs and shoulders, but the hair atop my 1.77m-tall body touches the ceiling (could be the glass roof robbing some headroom).

Taking care of personal belongings are well-placed storage points, which include cubbyholes between the back seat sides and the doors, a double cupholder cleverly integrated with the centre cushion, and a two-level boot floor with a total volume of 335 litres (including 16L underneath). For cargo-carrying versatility, the rear backrest has 60:40 split-fold and the front passenger seat-back can be flipped forward. Said passenger would probably prefer to slide his seat backward, because his footwell space is squeezed by wheel arch intrusion. 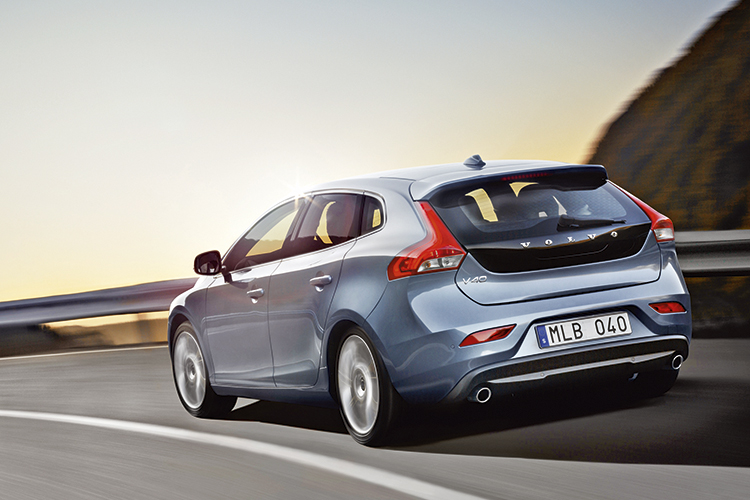 Squeezing with the competition in the premium hatch segment, the V40 has what it takes to stand out – very good looking, extremely safety conscious and offering rich Scandinavian flavour. When it arrives in Singapore early next year, the newest Volvo in town might become Sweden’s biggest hit here – other than Ikea, of course.