People buy SUVs more than sports cars and GTs, so the brands have to make them to survive. This enables the continued existence of our favourite “proper” playthings. Fine. We get it.

That said, super-SUVs have always been easy to respect but very difficult to love.

The engineering effort required to overcome the contradiction at the very foundation of their being (height and weight), often also results in sterility.

This is the challenge for romantic and storied brands trying to dip their fingers into the SUV-shaped pot of gold.

There is only one solution for a fast SUV. Only one way they can feel no matter the quality or quantity of technology, physics-defyingly capable.

Don’t get me wrong. By saying they cannot emulate sports cars, I do not mean they are slow. They often are astoundingly fast, but in a manner where the driver inevitably feels like a bystander to the car doing it on your behalf.

Of all the Cayennes and BMW Ms and AMGs out there, possibly the only uber-SUV that successfully carries a modicum of the theatre and romance of their parent brand is the Maserati Levante Trofeo. 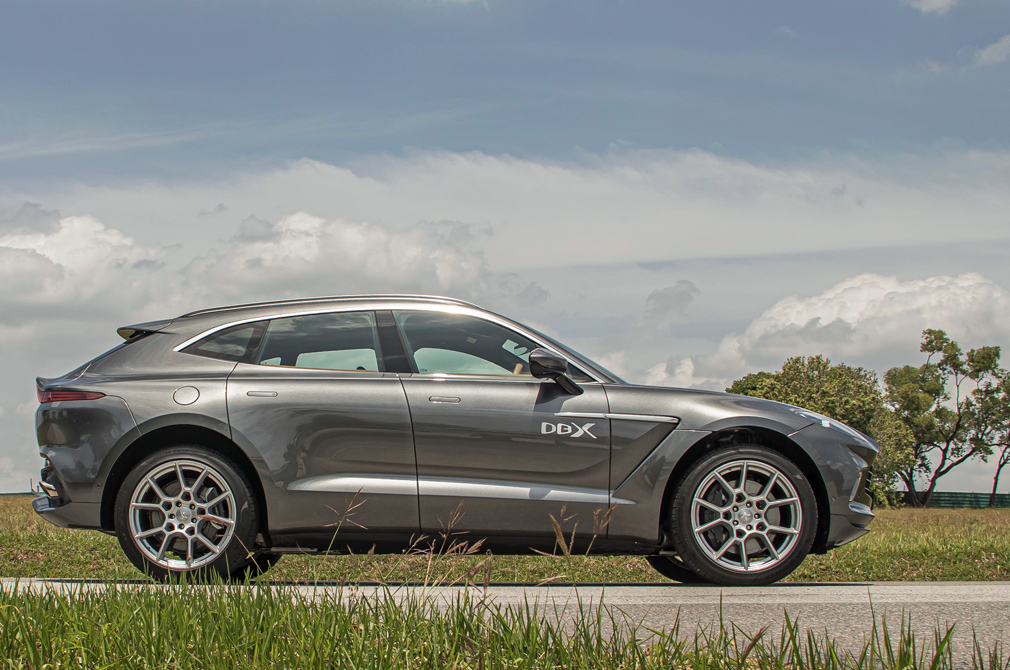 It does so by being loud and looking good, which is fine for a brand that trades on such values over true out and out dynamic superiority.

Now, enter Aston Martin. One of the world’s most storied brands, whose identity is steeped in intangibles.

Does the DBX look like an Aston Martin? Does it look sultry and seductive and suave, and likely to charm your knickers off with a debonair raise of the glass?

Ooooh yes. And that is hugely impressive for something that cannot rely on draping itself impossibly long and low on the ground like the knee-tremblingly beautiful Rapide can.

All the sweeps and bulges are in perfect proportion despite the height, and one cannot help but instantly recognise the brand even if the badges were to be taped over. 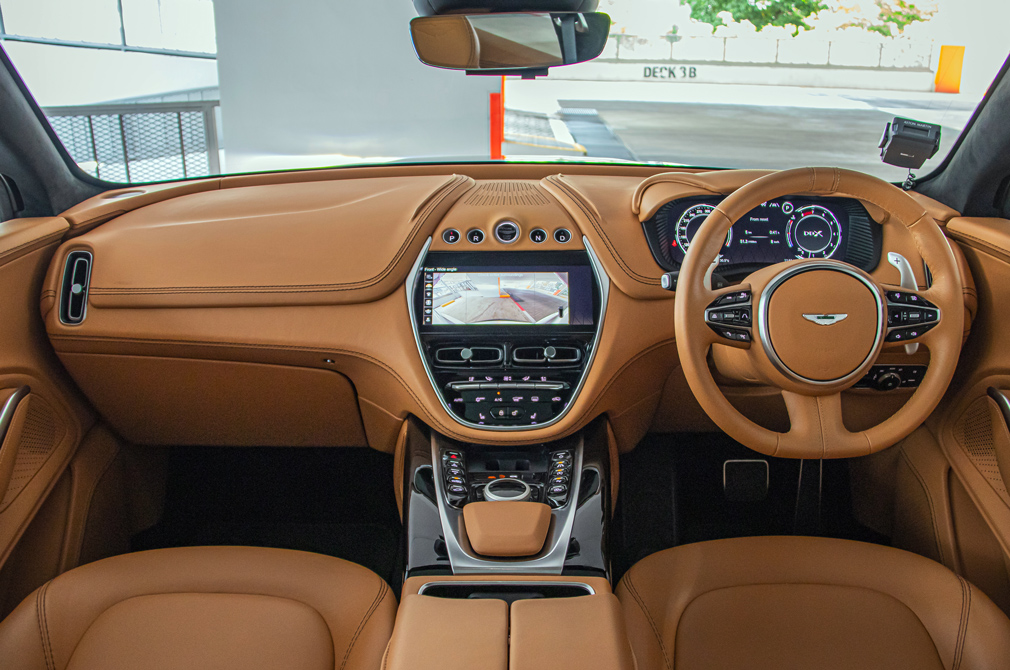 Step inside and the lust continues. The DBX’s cabin looks and feels like it was upholstered by being dipped into a fountain of molten leather.

In terms of look and feel, this is the most gorgeous interior applied to the inside of an SUV.

There are strips of beautifully cold metallic accents, while the centre console, amongst all the squidgy-ness of thick, pudgy leather, looks like it is cradled in a mother’s loving mitts.

In here is a theme dominated by gentle arcs and snuggling contours, rather than the harsh geometric angles preferred by Volkswagen Group models.

Finely crafted details like the ornamental aircon vents and arrow shaped door handles abound, emphasizing again that today’s Aston is a far cry from the struggling outfit of the 1990s that literally tacked Volkswagen Scirocco taillamps onto its flagship Virage. 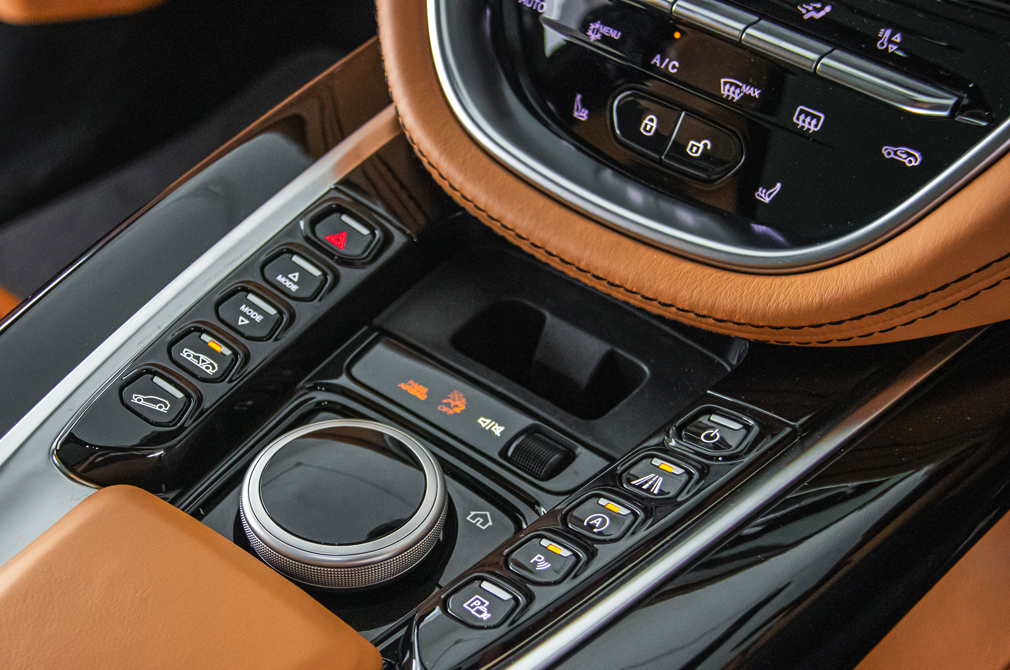 Everything in the Aston Martin DBX is either creamily soft or substantial and cold to the touch, and there is genuine, embracing, three-dimensionality to the environment.

Interestingly, the turn signal tones are hilariously authoritative, like a stiff-upper-lipped headmaster rapping sternly on a solid oak table.

A huge amount of technology has been lobbed at the car to make it drive well, too.

Sitting where it does in the range, the DBX has been pitched to emulate the grand touring personality of a DB11 more than it aims to be scintillating and visceral like the smaller Vantage. Good.

Can you marvel at rapier-like lasering of the front wheels like you can in an Exige? Or delight in the gentle arc of an F-Type’s rear displaying attitude under power?

Will you enjoy the sensation of four contact patches holding tenaciously to the tarmac while you, as the centre of mass, serves as a pivot near your bum like in a Vantage?

But you can’t do any of these in a Cayenne or Stelvio QV either. So, the Aston Martin DBX does not rewrite the rulebook in this regard.

Despite the distinctly and satisfyingly perceptible integrity of its chassis, the act of driving this fast SUV remains as it does driving any other. It is more of an undertaking of managing height and weight than it is revelling in the pleasure of conducting grip and yaw. 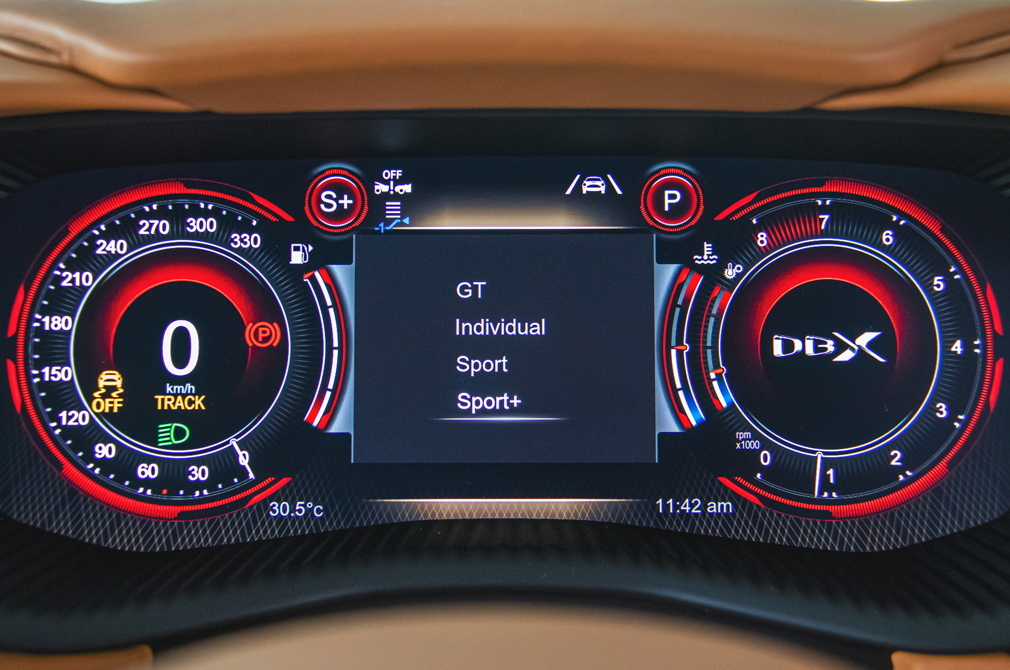 The vertical dimension makes its presence known over the longitudinal one; as it does in even the most stupendously capable rocket trucks.
Yet, while untwisting serpentine roads, the DBX does shows a unique hand.

And when attacking bends in earnest, the SUV neither flits nor darts in the hyperalert way a Cayenne might in one of its angrier drive modes.

Instead, the DBX coolly and calmly pours itself into challenging manoeuvres, subduing the road and the physical challenges by engulfing them in a syrupy, volcanic motion rather than stabbing at them with venom.

Astons are notably more tail-happy than their Porsche rivals, but the mischief has wisely been toned down here. 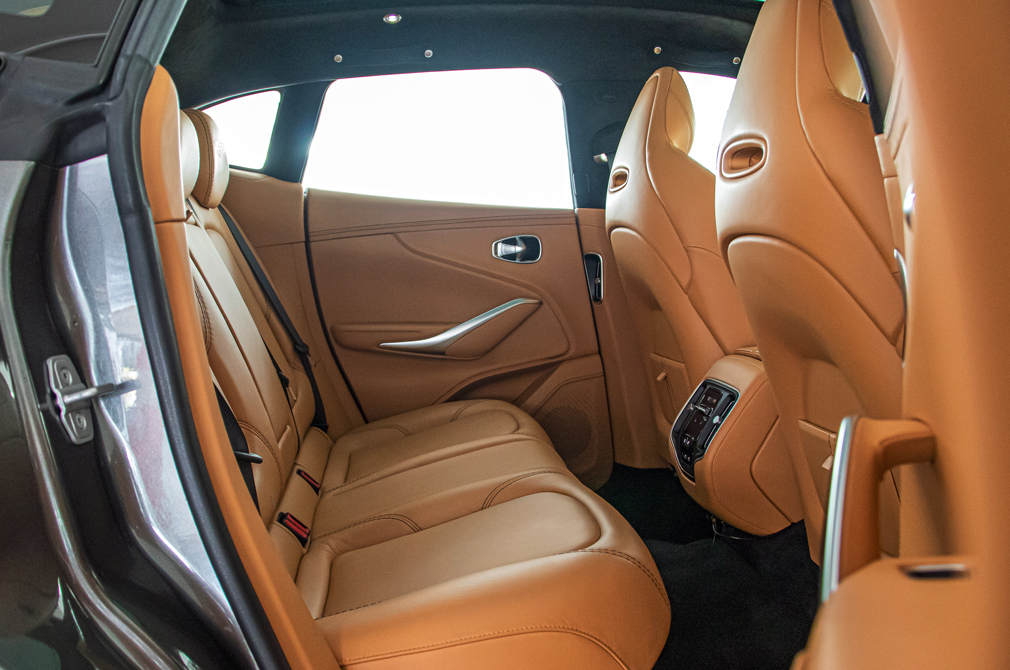 Such behaviour is eschewed in favour of resolute and unyielding discipline. In this way, the Aston Martin DBX is further away from a Vantage or DB11 than the Cayenne is from a 911.

It handles exactly how you would want a 2.2 tonne SUV to meatily navigate the cambered and sinuous tarmac of South Buona Vista Road.

This allows the car to move as a cohesive whole, avoiding the fast-SUV pitfalls of either brittleness or the disconcerting feeling like its heaving, heavy body needs time to catch up with its feet.

I beg your forgiveness for this revolting Aston Martin cliché, but it does really feel like a tuxedo is more appropriate than fire-retardant race-overalls for an enthused carving of the hills.

Thumb “GT mode” on the controller and the car allows you to dip progressively into the long pedal travel, swelling up on a wave of torque with a crescendo of V8 growling as a soundtrack.

Sport mode spikes things up a bit, but never to a point where your occiput gets repeatedly hammered into the richly stitched headrest. 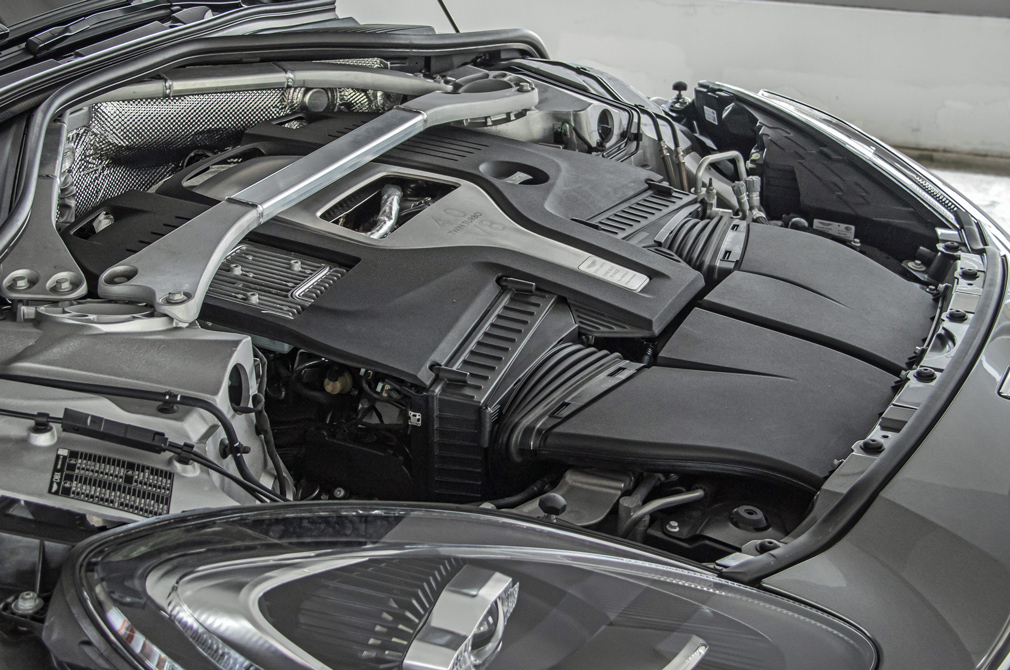 Turbocharged 4-litre V8, which is sourced from Mercedes-AMG, pumps out 542hp and 700Nm.

The thick resistance and textures of the wheel and pedals feel every bit as rich as the interior fittings. If that means they lack diamond tipped sharpness, that is all the more appropriate for the Aston Martin DBX’s brief.

Creep is a little too aggressive, and the big Mercedes-sourced AMG V8 needs a large gulp before it fires its full 542hp broadside at the horizon, so traffic-jam slicing and dicing is not this SUV’s strongest attribute.

Build up a head of speed, though, and in most situations most of the time, you have a truly enjoyable fluency – even if the engine could afford to be louder without risking any of the car’s sense of cultured grace.

Now, since the DBX is the spawn of a little independent carmaker, there are some noticeable omissions in the spec sheet at any price.

For instance, there are no soft-close doors – when a Mercedes costing a fraction of the price would have them. And the infotainment is lifted from a previous generation Mercedes, albeit given a healthy reskin.

Also, there is no fancy, mild or otherwise, hybrid electrical powertrain assistance to speak of.

But you can ignore all that. Because in a sea of uber capable but otherwise unmemorable trucks, the DBX, in large part by simple dint of being an Aston Martin, makes you feel grand and special.

Drive it as hard as you like, and the DBX never loses its temper. I would have one in a heartbeat. 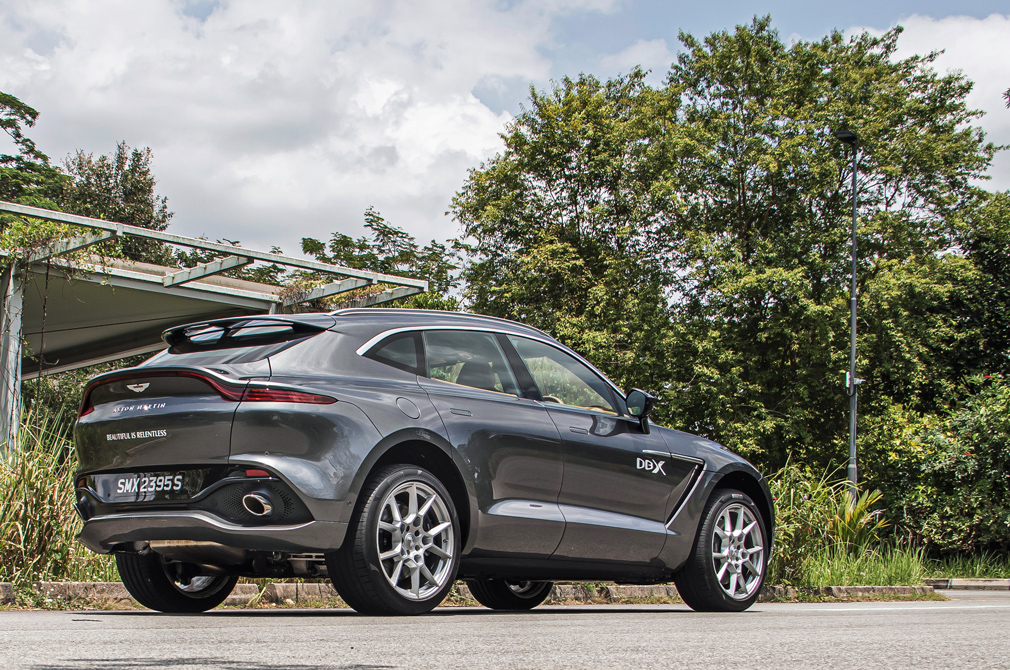