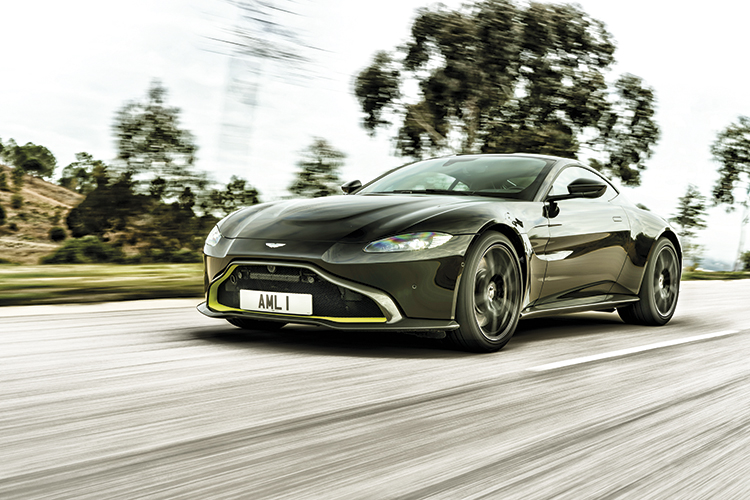 Where the Aston Martin DB11 is the grand tourer in Aston’s lineup, the Vantage is the hardcore two-seater sports car.

Three-and-a-half years after Daniel Craig drove his Aston Martin DB10 into the Tiber River in the 2014 Bond film Spectre, the car has resurfaced (not literally – although come to think of it, that would have been quite something) as the new Aston Vantage.

Which actually isn’t so surprising, since the one-off DB10 was based on the Vantage prototype which was then still in its early development stages.

The new Vantage’s looks aren’t a mere rehash of the DB10’s, though. The wide, squat, almost thuggish proportions are similar and the production Vantage has lost none of the Bond car’s visual drama, but in detail the cars are quite distinct. 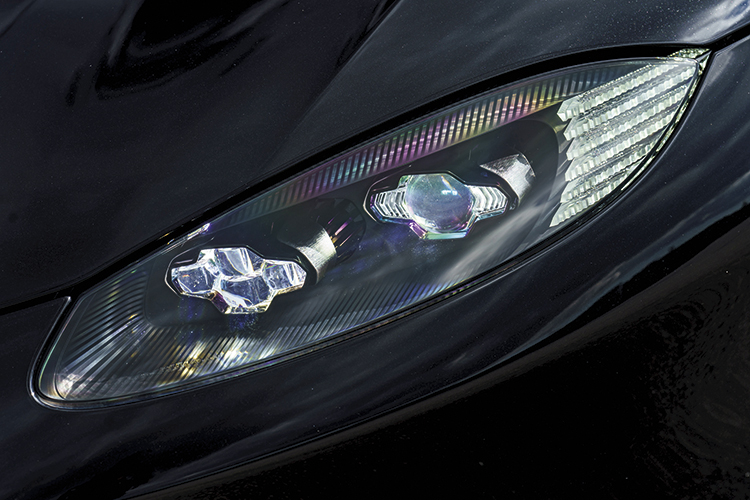 Its nose is pointier and lower than anything Aston has done before, and is flanked by small, lozenge-shaped headlamps. Together with a huge gaping grille encircled by a distinctive protruding lip and underlined by a pronounced splitter, they form a distinctly predatory, shark-like visage.

The tail-lamps comprise a single, elegant LED strip which meanders across the car’s tail as it rises to form a central ducktail spoiler and then falls away to shoulder level again.

They’re probably the loveliest tail-lamps I’ve seen since the “boomerang” ones on the 1990s Maserati 3200GT. 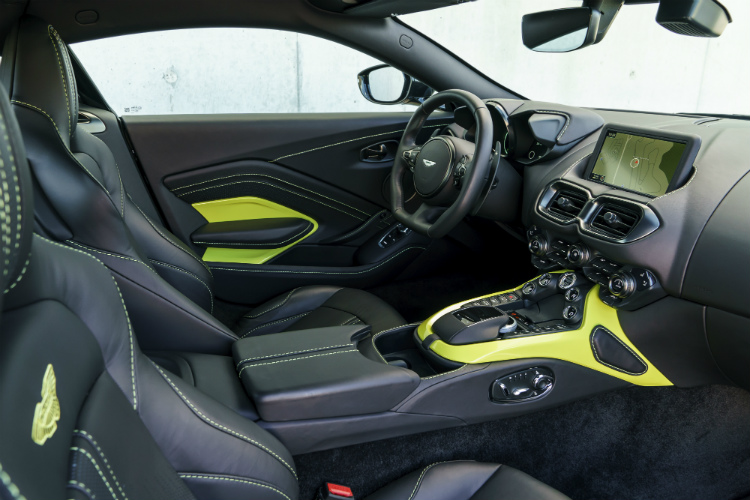 The distinctive lip around the front grille is mirrored at the rear, with a similar feature around the tailpipes and rear valance. Side “gills” on the front fenders vent high-pressure air from the wheel arches, and the car employs various other aerodynamic devices such as a front splitter, rear diffuser and clever underbody “fences” to direct and control airflow.

Seen from above, the car’s extremities are heavily chamfered, making the Vantage visually more compact when viewed from certain angles. The front and rear overhangs are much shorter than before thanks to a lengthened wheelbase, and the bulging fenders are almost cartoonishly distended to cover the wide tracks and fat tyres. 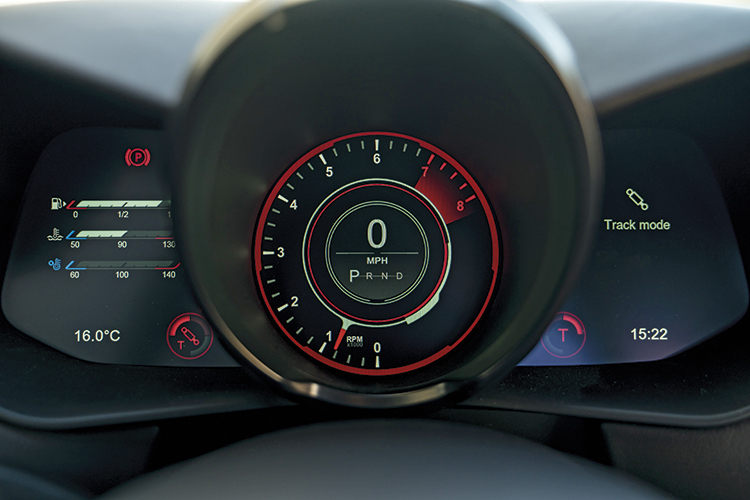 Overall, its looks are more organic and sculpted than its predecessor’s, and in a deliberate departure from previous Aston styling philosophy, it is also visually very distinct from the bigger DB11. Where the DB11 is the grand tourer in Aston’s lineup, the Vantage is the hardcore two-seater sports car, and in line with this, it is styled more aggressively.

As with the DB11, there is a strong but lightweight bonded aluminium structure under the Vantage’s striking skin, giving the chassis immense rigidity. 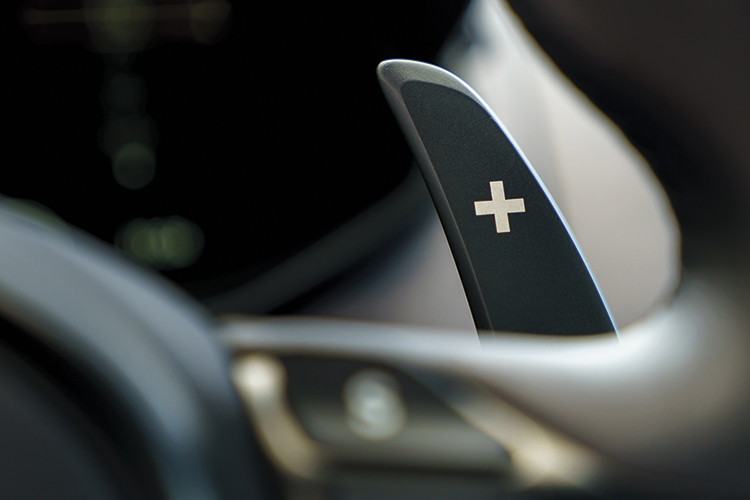 Unlike the DB11, however, the Vantage has a solidly mounted (as opposed to rubber-bushed) rear subframe for more precise handling and immediate response, albeit with some inevitable compromise to insulation and refinement.

But travelling in cossetted comfort is not what the Vantage is about anyway. Its cabin is plush, no doubt, beautifully trimmed in leather, Alcantara and carbon fibre, and fully equipped with all the latest electronics and assistance features, as you’d expect.

But all that is secondary to the car’s role as a serious driving machine, for which the low-slung driving position, ideally placed pedals and steering wheel, and the extended, fixed-position paddle shifters on the steering column are far more critical. 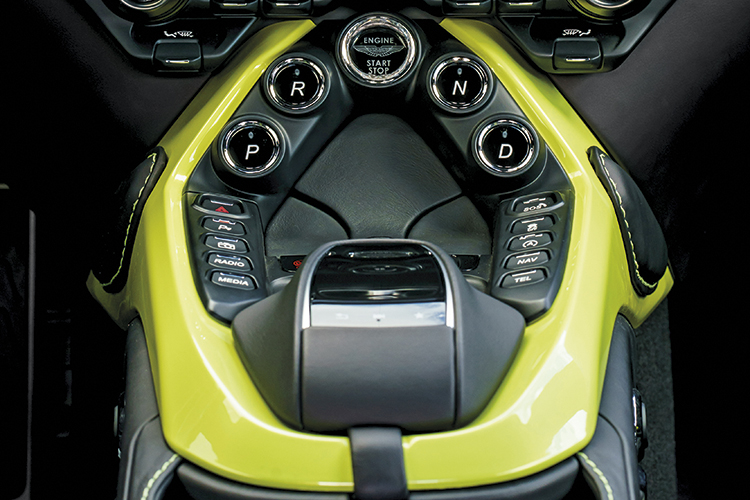 In the Vantage, the engine has a markedly different soundtrack than it does when AMG-mounted, sounding less percussive, and being endowed with a deeper, throatier note which rises to a thrilling bellow at the 7000rpm redline. And if that’s not enough, there is a Sport exhaust option, visually denoted by quad tailpipes (two at each extremity of the rear valance, instead of one on each side for the standard setup).

The car is already very vocal with the standard exhaust, but the Sport exhaust dials up the decibel count even more, and also pops and crackles more enthusiastically on gearchanges. 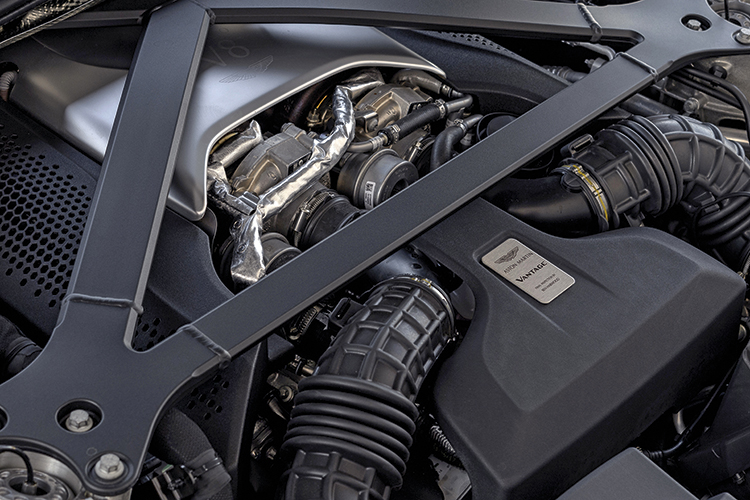 Aston Martin Vantage’s engine is a turbocharged 4-litre V8 sourced from Mercedes-AMG; it’s tuned to have a deeper and throatier note that rises to a thrilling bellow at the 7000rpm redline.

The engine certainly has the bite to match its considerable bark, delivering 510hp and 685Nm of torque through an 8-speed ZF automatic gearbox, to take the Vantage to 100km/h in 3.6 seconds and on to an eventual top speed of 314km/h. In the pipeline is a 7-speed manual, which is expected to appear next year.

At the Algarve International Circuit in southern Portugal where we were let loose, the Vantage thrilled with its immense composure over the track’s sweeping bends and blind crests, and its agility and grip through the tighter corners. The car’s downforce-creating aerodynamics really proved their worth, keeping the car nailed to the tarmac even on the very fastest, flat-out turns.

Thanks to that twin-turbo torque, it was searingly quick out of bends and down the straights, and its throttle response was always instant, with not a hint of turbo lag. But the gearbox put a slight dampener on things, being occasionally slow to respond to paddle-shift commands. 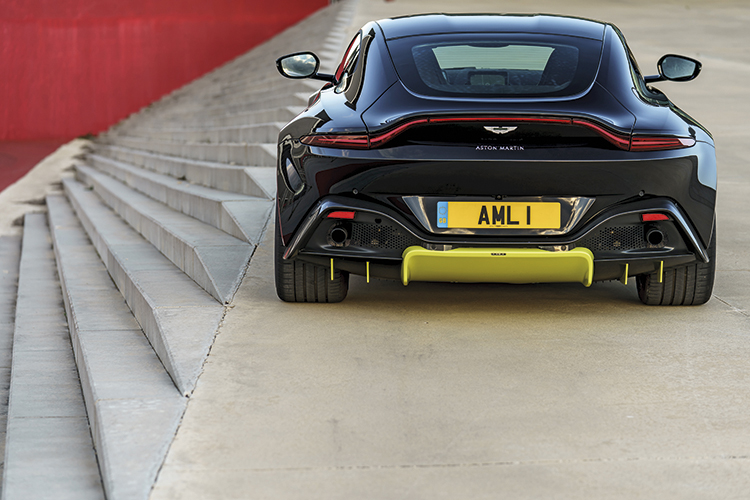 The optional carbon-ceramic brakes were ferociously effective and tireless, and the firm, short-travel pedal was confidence-inspiring and allowed for easy modulation of braking effort, even from the massive speeds we were hitting at the end of the long main straight.

Unlike some other front-engine, rear-wheel-drive sports cars, the Vantage displayed no hint of a wayward tail, remaining planted and balanced through turns despite the immense power coursing through the rear wheels.

Credit for that, to a great extent, must go to the electronic rear differential (E-Diff) – fitted for the first time on an Aston Martin – which, together with Dynamic Torque Vectoring, quells wheelspin and actively channels power to the appropriate rear wheel to aid cornering and maximise forward propulsion. 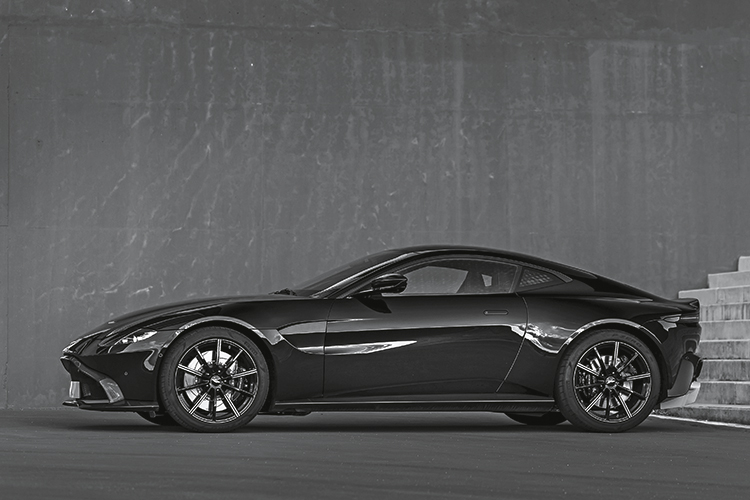 The E-Diff never overtly made its presence felt, but over 20-plus laps on track, the car just proved incredibly agile yet unerringly stable, even when power was applied well before a corner exit.

Carving its way along winding Portuguese mountain roads the next day, the Vantage again felt at home, despite a persistent drizzle leaving the road surface slick.

Going at eight-tenths instead of flat-out as we had done on track, allowed more measured assessment of the steering – which, while slightly short on feel, was nevertheless well-weighted, quick-geared and accurate. It allowed the car to be placed with precision, and even with the adaptive dampers in Sport mode (the softest of three settings), body control over undulations was faultless. 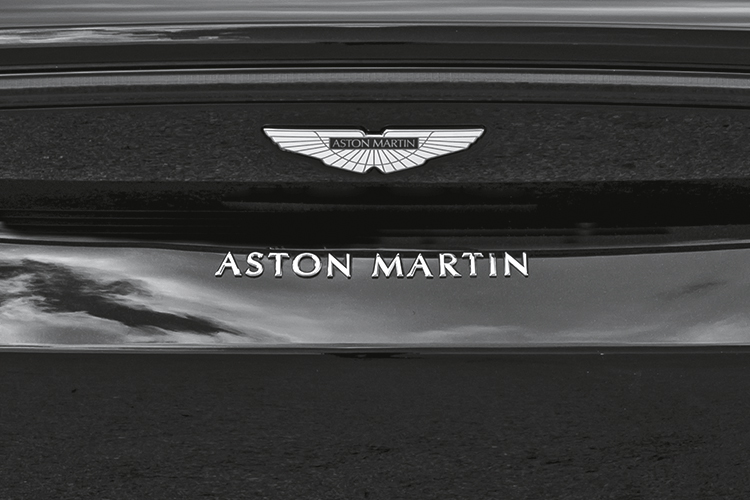 The ride in Sport mode was taut and nuggety, but still pliant enough on the occasionally crumbling backroads. The firmer Sport Plus mode we saved for the better-surfaced stretches, while Track mode was, as its name suggests, too hard for anything but a circuit.

But again the gearbox was a slight blot on the scorecard.The rev-matching throttle-blip on downchanges may have been intended to mimic a heel-and-toe gearchange, but it instead felt like a learner driver with slight clutch-control issues, often resulting in a slight forward lurch instead of a seamless change. Not ideal when your fellow journo in the car is nursing a hangover from the previous night’s wine-pairing dinner and you’re trying to drive as smoothly as possible

But in mitigation, our test car was a pre-production model, so some further calibration work should fix the issue. 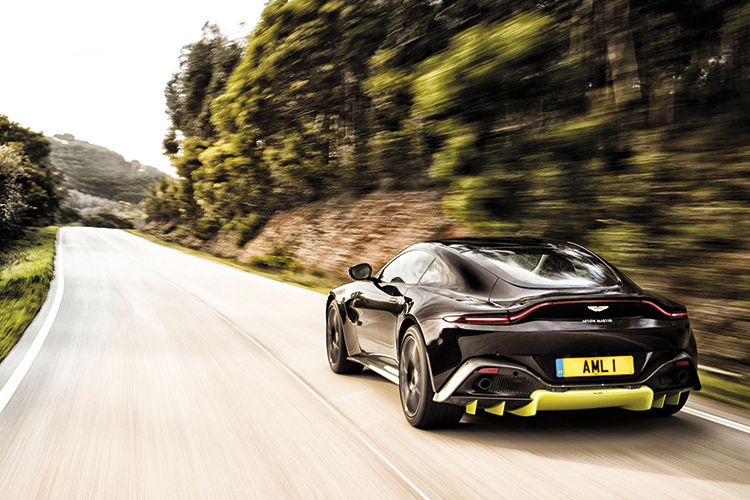 The Aston Martin Vantage displayed no hint of a wayward tail, remaining plated and balanced throughout turns despite the immense power coursing through the rear wheels.

So the new Vantage absolutely has the ability to match its showcar looks. It is perhaps a touch less interactive to steer than the 911 Carrera GTS that Aston says was the benchmark, but it also feels more exotic, is better-sounding and looks far more arresting than the Porsche. Aston’s smallest car is also its biggest thriller.

Check out the Aston Martin Vantage