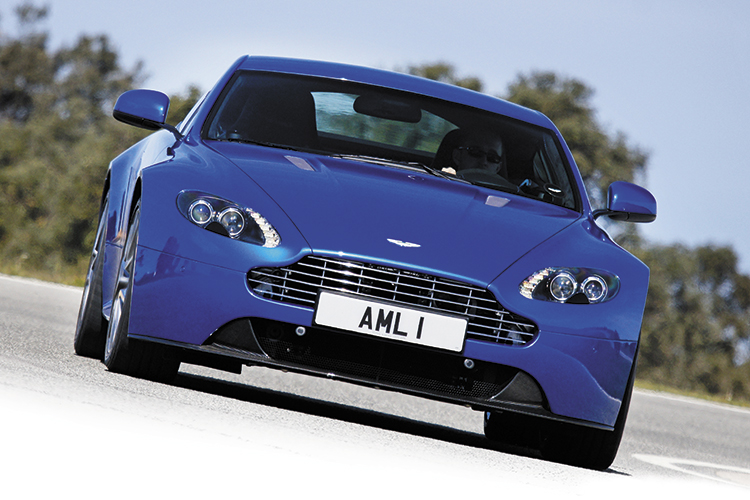 Even at idle, the exhaust of the Aston Martin Vantage S throbs with purpose. Tickle the throttle and the engine rasps and fizzes with menace; and at high revs, it yowls to the redline.

In fact, it sounds more like a classic Italian V6 racer than a modern V8, but serves notice that this latest Aston is one serious driving tool, whatever the subliminal associations.

What is the Vantage S, exactly? In short, it’s a lighter, faster and sharper V8 Vantage. But the changes add up to more than the sum of their parts, the S flaunting a far more intense and hardcore character than that of the polished V8 Vantage. It’s Aston’s equivalent of a GT3 or Scuderia. 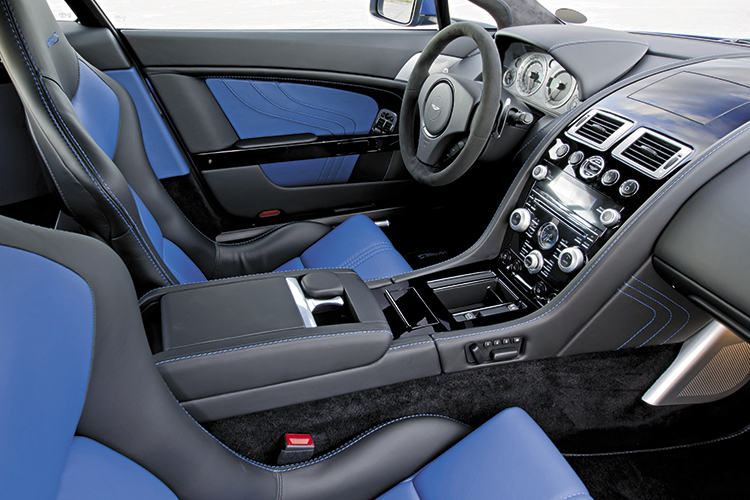 Thinly padded and lightweight carbon-composite bucket seats in the Aston Martin Vantage S are a must-have factory option for the track day devotee.

And what really justify the addition of that extra letter to the car’s name are 10bhp more power and 20Nm more torque from that 4.7-litre V8 engine (now with 430bhp and 490Nm), a quicker steering rack, firmer (but not lower) suspension, 10mm wider rubber front and rear, bigger but lighter 6-pot front brakes in place of the V8’s 4-pots, a new muffler and revised exhaust valve mapping for that to-die-for note and, most significantly, an all-new 7-speed close-ratio “Sportshift II” sequential gearbox from Graziano.

Despite boasting an extra gear over the old 6-speeder, the new transmission is lighter because being air- instead of oil-cooled, it does without a lube cooler. This, plus the lighter brakes, shave 30kg off the vehicle’s weight.

But you’d still be hard-pressed to identify the Aston Martin Vantage S at a glance. 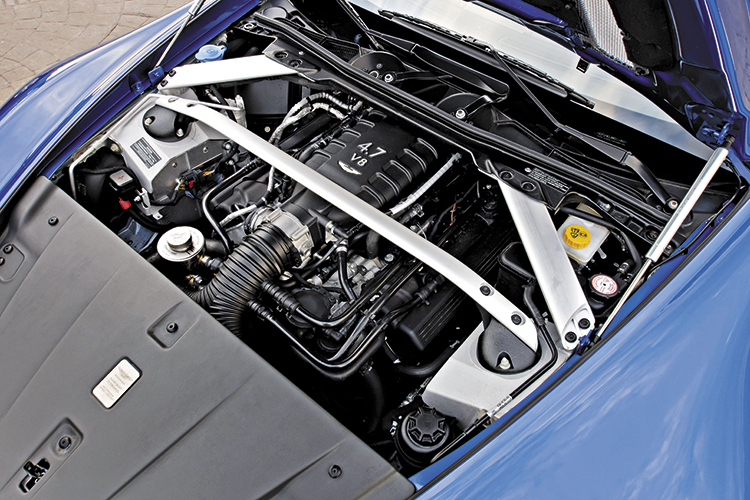 It’s clearly a car for piloting, not posing. The driving position is perfect, and even at a trundle, you sense the benefits of that quicker steering rack immediately, with much less wheel twirling involved.

The ride is the other thing that grabs your attention, displaying noticeably less compliance and more resolute damping than the standard Vantage. It thumps over bumps and patters across expansion strips, and even when attacking undulations flat-out, the car hardly rises on its springs.

Yet despite that tightly wound setup, there’s no harshness. The ride is hard but never crashy, and rather than detract from your enjoyment, it merely adds to the intensity of the experience, keying you right into the road surface.

The Aston Martin Vantage S’ front-end response is astonishingly sharp – you don’t so much turn the car into a high-speed bend as you edge it in with a nudge of steering, feeling the vehicle pivot and the rear settle ever so slightly into a squat before you feed in the throttle (smoothly, so you don’t unsettle that tensed tail) and punch out onto the next straight. 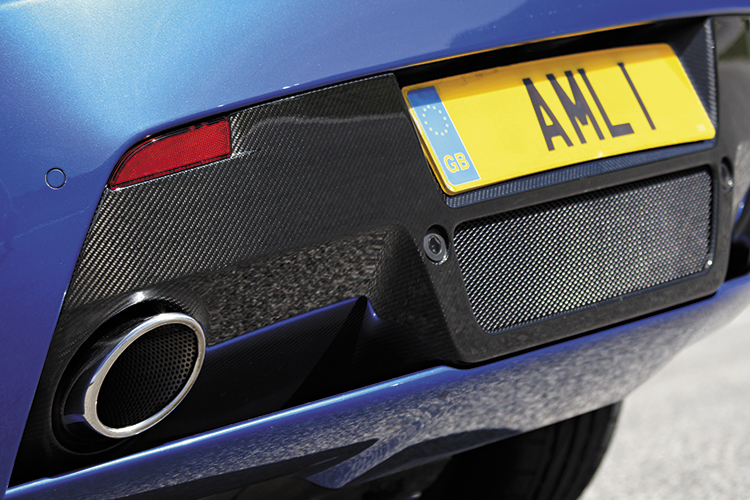 Grip is massive, but you still treat the short-wheelbased Aston Martin Vantage S with respect because at the limit, it feels poised on a knife’s edge.

The steering tugs and shimmies with feedback all this while, relaying every nuance of the tarmac to you through its Alcantara rim. You’ll need to assert your dominance over that super-sharp helm over uneven cambers, because even the slightest unintended steering wobble will translate into a front-end veer.

That new gearbox is a great match for this car’s road-racer nature, with barely any rev drop as it snaps between gears with each tug of the paddle shifter. Gear changes are quicker than before, but at 150 milliseconds, still lack the instantaneity of some rivals.

And on-limit upchanges would benefit from a more pronounced kick, for a greater sense of immediacy. Still, it’s a minor gripe. The new gearbox is a great success overall, and in auto does a good job at shuffling ratios around town. 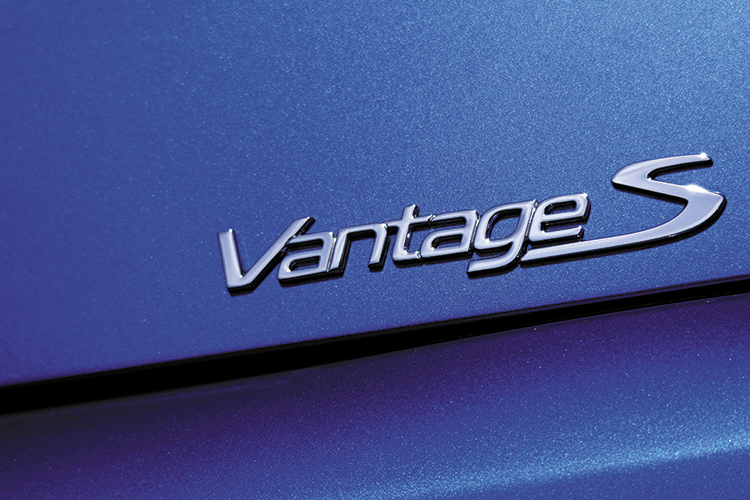 Flat-out acceleration is predictably searing. Strangely, Aston Martin shies away from quoting an official 0-100km/h time, but given that the standard V8 Vantage does it in 4.9 seconds, the more powerful and lighter S with its closer-stacked ratios should clock about 4.6 seconds or so.

Aston says the relatively modest weight of the Aston Martin Vantage S made carbon-ceramic brakes unnecessary, and so it proved over 20 minutes of hard lapping on the sinuous Ascari circuit in southern Spain.

After a session that would have had the brakes on some other sports cars begging for mercy, the Aston’s were as good as new and asking for more.

Said track session ably demonstrated the racer’s edge to which the car’s on-road character alludes. It charged through the circuit’s flat-out sweepers with a total lack of discernible roll, dived through direction-change chicanes with astonishing agility and simply refused to understeer even through the tightest hairpins. 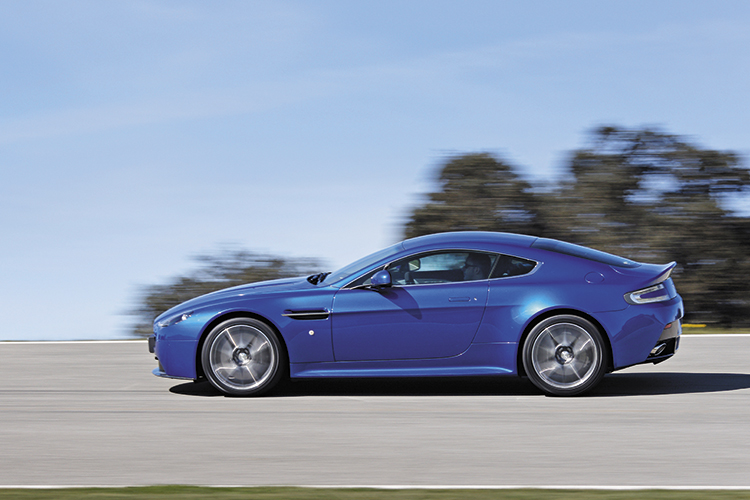 The Aston Martin Vantage S is the British carmaker’s idea of a GT3 refugee racer for the open road.

The Aston Martin Vantage S may not be everyone’s idea of a modern Aston – being a world away from the gentlemen’s coupes that typify the marque – but it’s enthralling to drive.

Plus, the bad-ass noise it makes is really something else. The Aston Martin Vantage S is not just Aston’s most focused road car, it is also possibly its most memorable.