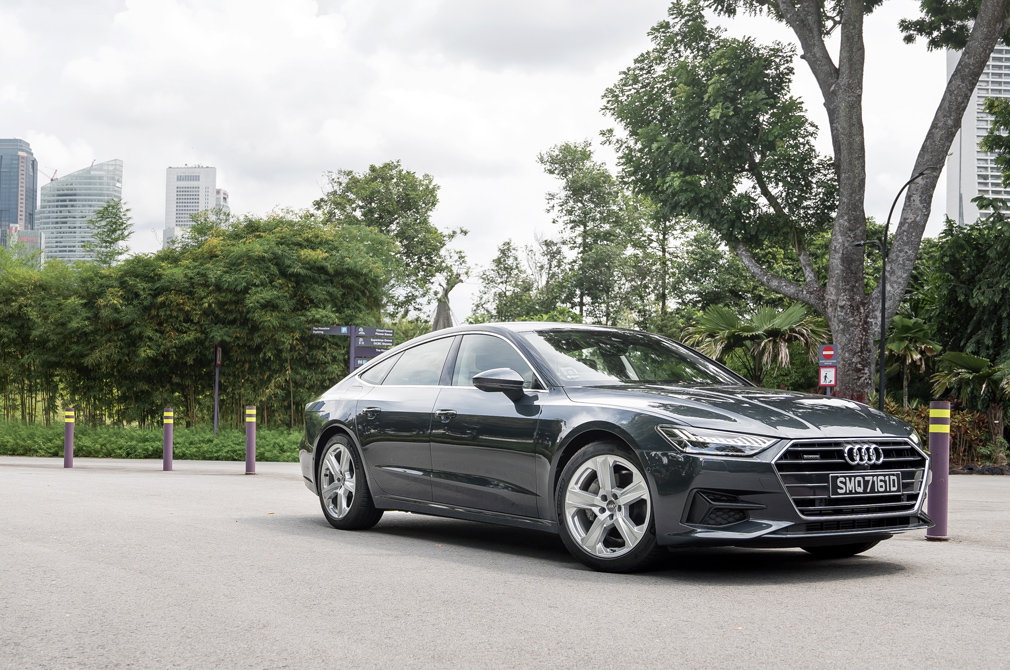 What do you do when you don’t want a sedan, hatchback, SUV or coupe?

Well, you would consider something relatively offbeat, like a four-door-coupe/grand tourer. That’s certainly one way to describe the Audi A7 Sportback.

Audi sees the A7 Sportback as a combination of a sedan, coupe and station wagon. It looks like a big saloon with curvy/sporty lines. The “estate” portion is the huge boot that comes courtesy of the liftback tailgate/boot lid.

In fact, the A7 Sportback belongs to such a niche segment that it only has two other rivals: the BMW 6 Series Gran Turismo (GT) and Mercedes-Benz CLS, which started this trend.

The Audi A7 Sportback we’re reviewing here is the 2-litre “base” variant. But as we shall soon see, there’s nothing basic about it. 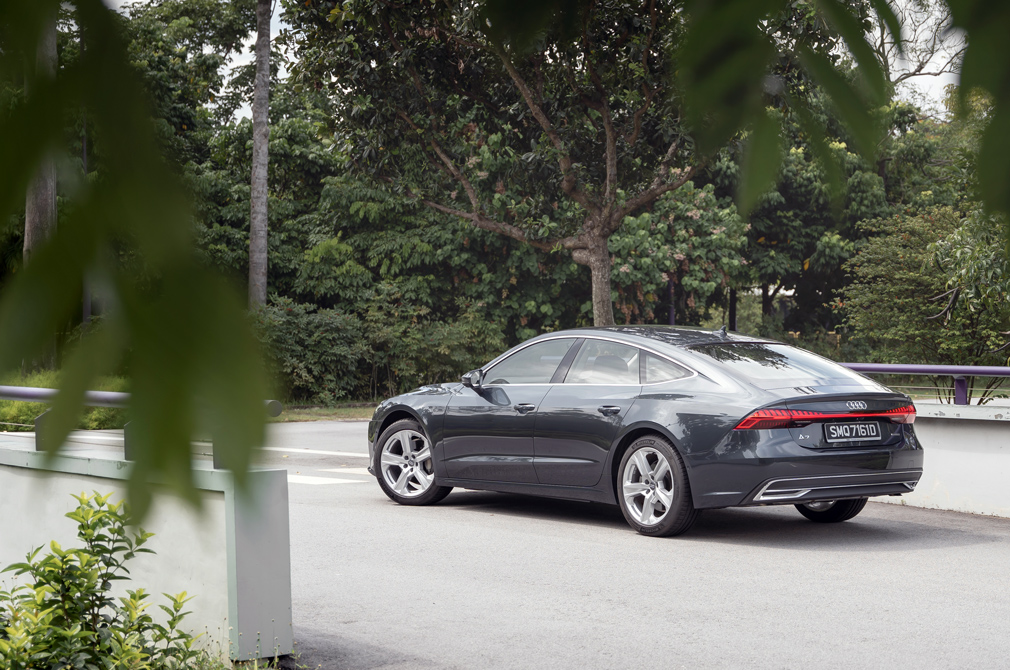 A7’s rear end is now more upright and no longer in need of a “butt lift” like its predecessor.

In terms of styling, the only thing that bugged many about the previous Audi A7 was its “sad-looking” rear end.

“Frumpy” would have been a nicer adjective. But considering its droopiness, there really wasn’t a nicer word. Thankfully, the new model hasn’t inherited any design cues from its predecessor.

What you see instead is a dynamic-looking Sportback with sharp lines and swollen fenders, which Audi calls “Ur quattro blisters”. Filling the wheel wells are 19-inch wheels (20-inches for the top-end 3-litre model).

Staring at you are HD Matrix LED headlights and a low-set grille. If the intention was to create an aggressive face, then the designers have succeeded.

As mentioned earlier, the rear end has been resolved and no longer looks unhappy. To further emphasise the car’s dynamic (and happy) presence, the tail-lights are linked by a light strip. It looks very striking at night. Neat cockpit is full of tech, but don’t worry, everything is “approachable”.

BIG ON COMFORT AND TECHNOLOGY

The Audi A7’s “big luxury car” feel is evident the moment you settle in behind the wheel.

The doors have soft-close mechanisms that quietly pull them shut after they are half-closed. Enveloped in Milano leather (it’s Valcona leather for the 3-litre model), you notice that there are very few physical buttons.

Most of the functions and controls of the Audi A7 are now accessed via Audi’s MMI Touch Response system. Said system comprises two screens – a 10.1-inch display for the infotainment and an 8.6-inch screen for the climate controls.

I like how Audi has managed to recreate the same “click” sound heard when the buttons in the cabin are pressed.

Now, the pretty colours, sharp fonts and “classy” clicking sounds are nice and all, but why couldn’t we have actual air-con controls? They would be more direct and thus more intuitive to new users. 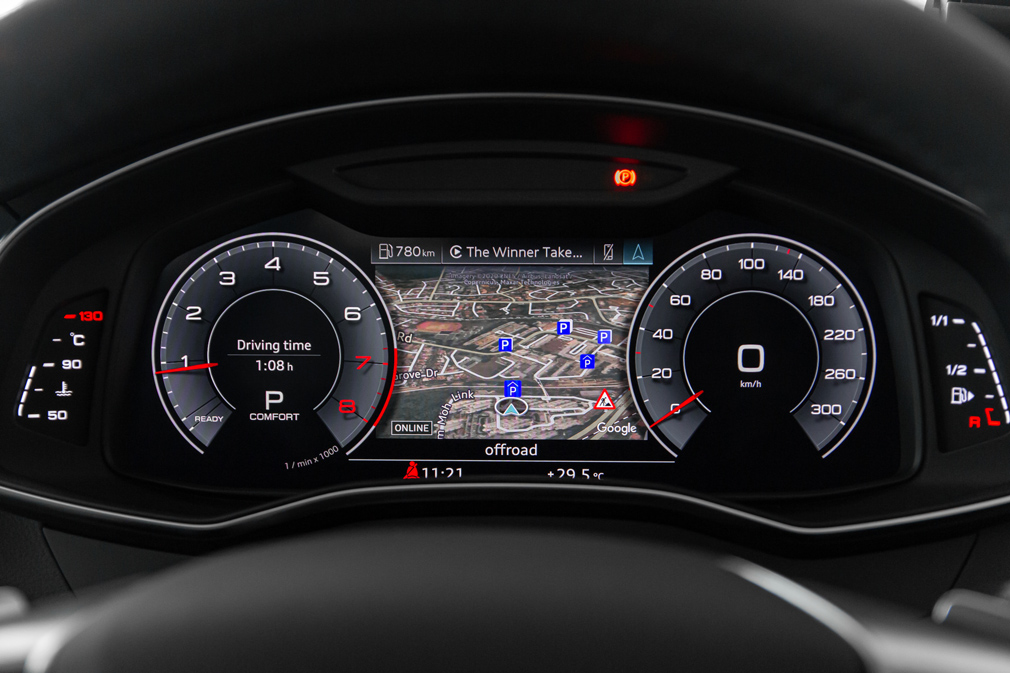 That said, the Audi A7’s infotainment system has everything a modern driver needs, from navigation to Apple CarPlay. And the learning curve isn’t as steep as expected.

What the driver will enjoy looking at is Virtual Cockpit Plus – the latest version of Audi’s digital instrument panel – which lets you choose from a variety of layouts.

With a wheelbase length of 2926mm and efficient packaging, there’s plenty of room to stretch out in the Audi A7’s backseat. An additional two climate zones enhance occupants’ comfort and sense of refinement.

Although unseen in photos, our test car came with a handy elastic cargo net. This is especially useful in keeping items from flying around – especially during “enthusiastic” manoeuvres. 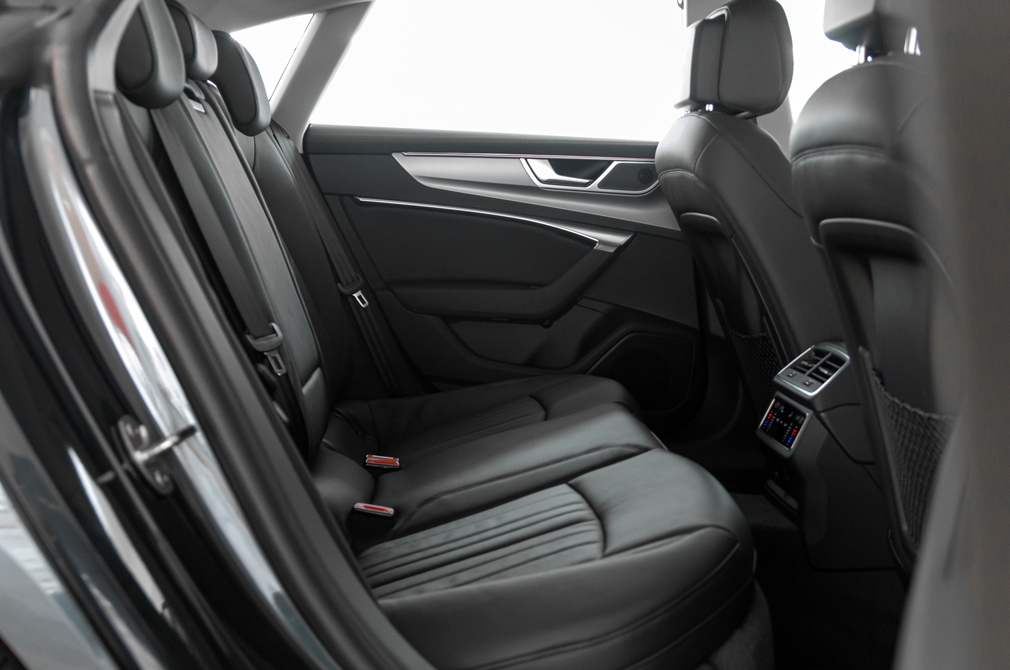 Even in 2-litre guise, the Audi A7 is decently quick, and the power delivery is creamy, too.

To put that in perspective, the Audi A7 is slightly quicker than the current 227hp (230PS) Volkswagen Golf GTI, which does the same in 6.4 seconds.

That’s not bad for a big fastback that weighs 1750kg sans driver. 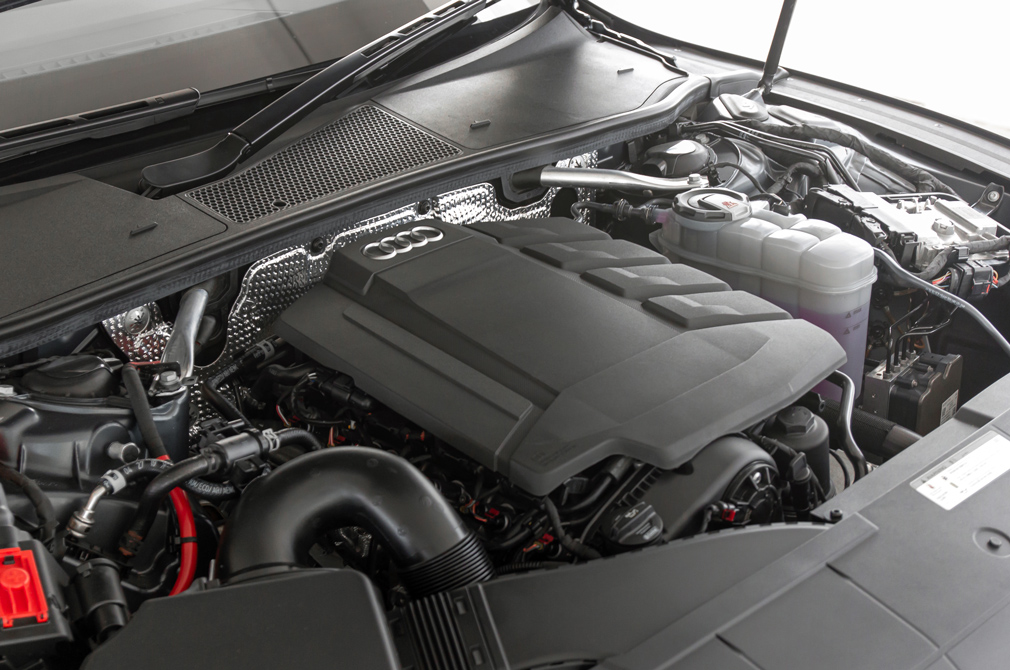 With Drive Select set to Auto, gearchanges are seamless and acceleration is progressive, while the adaptive dampers remain pliant.

Tapping down on the gearshift lever to engage “S” mode makes the gearbox more responsive and hold onto each ratio a bit longer. Full “manual” control only requires a pull of the paddle shifter.

CRUISING INSTEAD OF BRUISING ABILITIES

As a grand tourer, the Audi A7 is in its element cruising up and down expressways. Despite “only” having four cylinders, it does have that capable, long-legged feel.

At highway speeds, the A7 is almost silent – only a soft whisper of wind noise around the driver’s side hints at how fast you’re going.

This is when the car seems to shrink around you. That big-car feel that can be overwhelming at low speeds and in tight carparks disappears.

The Audi A7 is actually more manoeuvrable than expected. Yes, the steering wheel is oversized, but the helm itself is responsive and effortless. 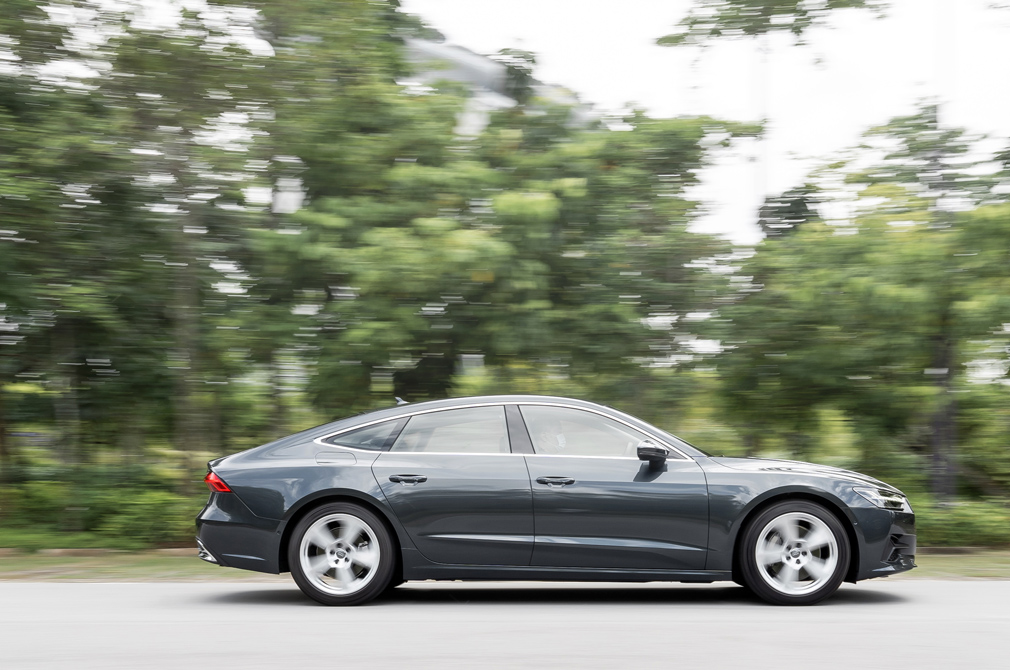 The A7’s dampers are at their firmest in Dynamic mode, but the ride is never crashy. Your passengers might not even notice the change.

Can the Audi A7 be hustled into corners? Yes, you can keep pushing it and the traction will see you through without issue. But the real question is, are you going to be comfortable doing this?

In my case, the answer is no. Such a large and comfortable cruiser does not lend itself well to being treated like this. It can cope, but you the driver, are not going to like it.

AUDI A7 IN THE MIDDLE

At $316,700, the Audi A7 is currently priced between its BMW and Mercedes rivals.

The larger BMW 630i Gran Turismo, at $287,800, should arguably be the most attractive proposition, especially since its performance is similar to the A7’s.

However, an updated 6 GT is expected to arrive next year. If you’re looking to buy one of these cars now, you’d have to be okay with this “outgoing” model or decide again when the new one arrives.

Meanwhile, the 299hp Mercedes-Benz CLS350 is the quickest and most powerful of the trio. But at $340,888, it commands a hefty premium over its rivals. We also thought it could also use more refinement.

And that’s why in this company, Audi’s big, friendly and tech-laden GT is an even more enticing proposition. 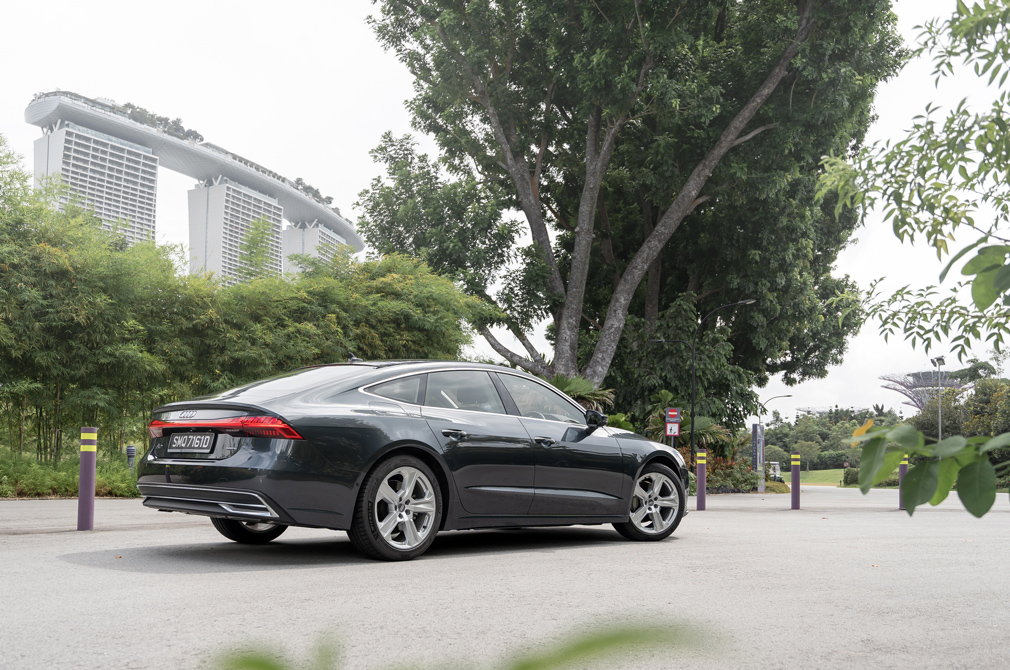 Read our Audi A7 3.0 review here
Or check out our reviews of the Mercedes-Benz CLS350 and CLS450 models
What is a mild hybrid?