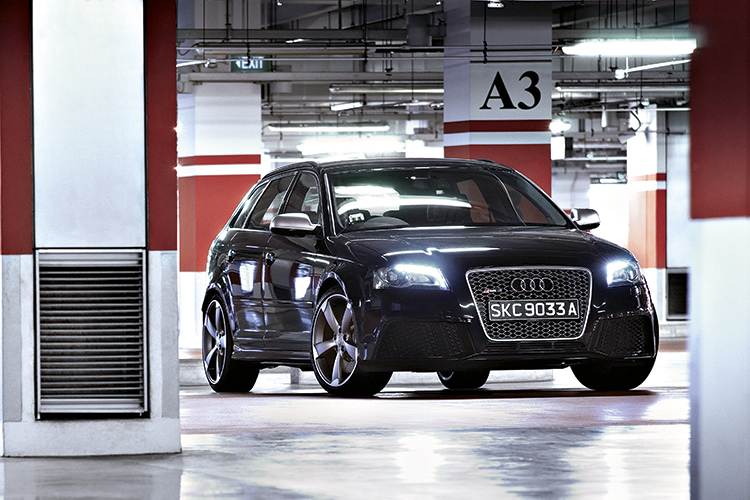 The Audi RS3 is fast and all, but it is less racy than the Audi RS5.

The idea sounds fascinating. Transplant the entire drivetrain of the stonking Audi TT RS – complete with sticky quattro transmission and punchy turbo 2.5-litre 5-cylinder – into the compact body of the Audi A3 Sportback, and you’ve got the recipe for a real pocket rocket.

The ingredients are certainly there. That aforementioned 5-pot engine delivers a muscular 340bhp and 450Nm to all four wheels via a 7-speed paddle shift-equipped dual-clutch gearbox. 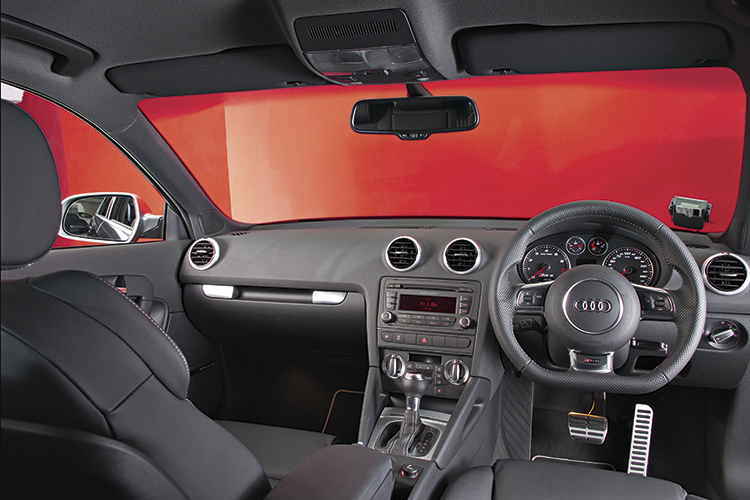 There is simply not enough Renn Sport in the Audi RS3’s cockpit, but its ergonomics and equipment are beyond reproach.

The unassuming five-door A3 body has been beefed up with wider front fenders (made of weight-saving carbon fibre-reinforced plastic), a deep and aggressively vented front bumper, flared side skirts and a diffuser-like rear bumper with two fat, chrome-tipped exhaust pipes poking out.

There’s a tasteful spoiler capping the tailgate, and the car’s posture has been improved with a 25mm reduction in ride height and a set of lovely 19-inch five-spoke alloys. There are fat tyres all round, although unusually, the front tyres are slightly wider than the rears (235-section versus 225).

Despite all this, the RS3 still falls a bit short visually, because the aesthetic add-ons cannot quite disguise the pedestrian five-door hatchback body beneath. It still looks like a dressed-up A3. In this regard, it is no match for its aesthetically pumped-up arch-rival, the BMW 1 Series M Coupe, which looks like a pit bull on steroids. 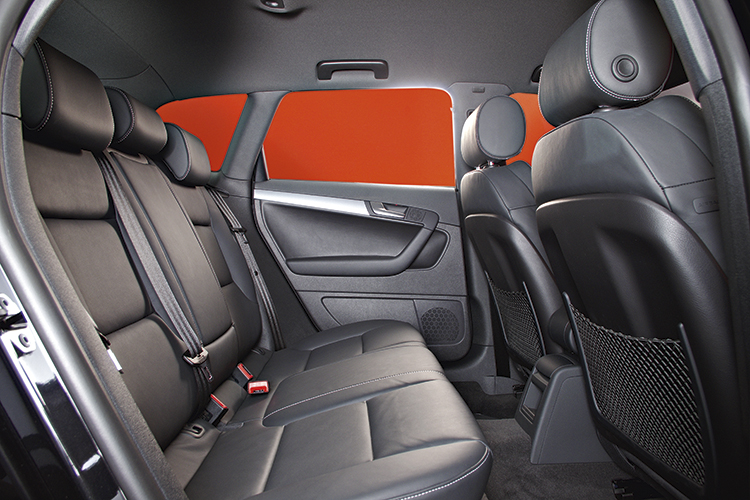 Ah yes, the 1M. At first blush, the two-door rear-driven coupe from Munich seems like an unlikely competitor to the five-door all-wheel drive RS3, but in terms of price point and outright performance, as well as badge appeal, these two cars meet head-on in the marketplace.

On the showroom floor, the RS3 makes a convincing case for itself, with a top-quality, coherent interior. Style-wise, it’s Audi-generic, flamboyance-free but faultlessly ergonomic. Everything is sensibly placed, soft-touch switches and subtly textured surfaces are everywhere, and there’s the usual, handily sized flat-bottomed steering wheel that you find in all sporting Audi products. Bits of strategically placed alloy trim here and there perk up the ambience, and the large glass area allows for excellent visibility and an airy feel.

The driving position isn’t perfect, though – the front seats are fairly ordinary, not as heavily bolstered and bucket-like as you’d expect of an Audi RS model, and certainly less snug and inviting than the BMW 1M’s more extreme items. That neat steering wheel also doesn’t extend close enough – for the long-legged driver, the wheel is a bit of a stretch away; not enough to cause discomfort, but just that irksome bit less-than-ideal. 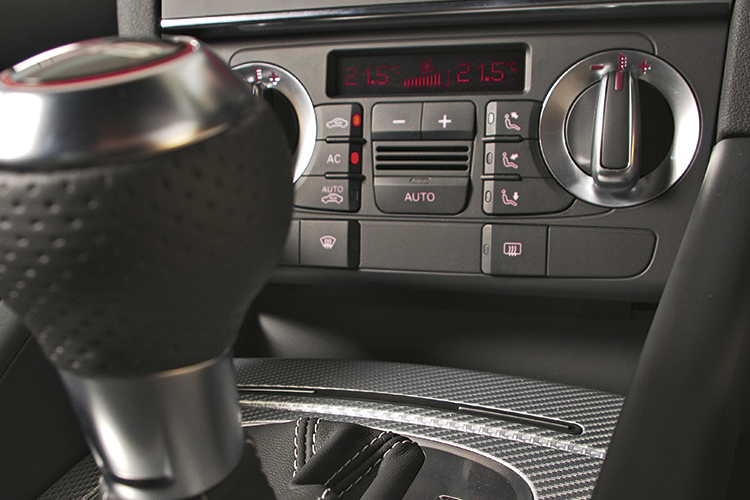 Given its five-door configuration, the RS3’s trump card over the BMW 1M is practicality, and it really drives home the advantage. Whereas the 1M is a barely passable four-seater, the RS3 has ample headroom and shoulder space in the back, and enough knee room for a six-footer to sit comfortably behind another.

The sensibly shaped 302-litre boot and folding rear seats make it a very versatile cargo carrier, too, should the need arise. Of course, in a vehicle like this, carrying loads is a lot less important than carrying plenty of speed everywhere.

The RS3’s potent 5-cylinder sounds pretty normal when you start it up, but stabbing the “S” button on the centre console opens up a valve in the exhaust and uncorks more of the engine’s burble. Still, progress is civilised when you ease the gearlever into D and boot the throttle. 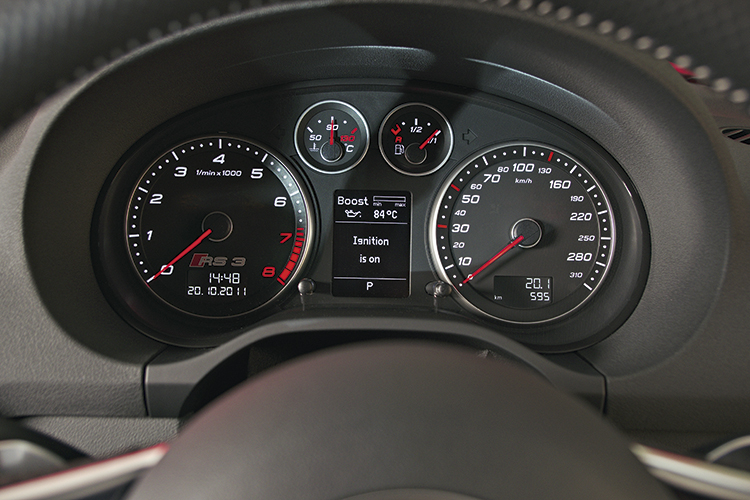 To the average petrolhead, the acceleration numbers written aggressively by the Audi RS3 make for serious reading.

There’s good low-end torque and throttle response, but that low-rev urge only really morphs into thrilling shove when the dial surges past 3000rpm. The engine note hardens and develops its characteristic 5-cylinder throb, as the car spears forward in breathtaking fashion.

Despite its pint-sized dimensions, the RS3 still weighs a surprising 1.6 tonnes – more than a basic Audi A6. The quattro all-wheel drive partly explains this portliness, but it’s still a substantial figure for such a small car. That said, the weight does not seem to hamper its acceleration, which turns savage once the turbocharger comes alive. 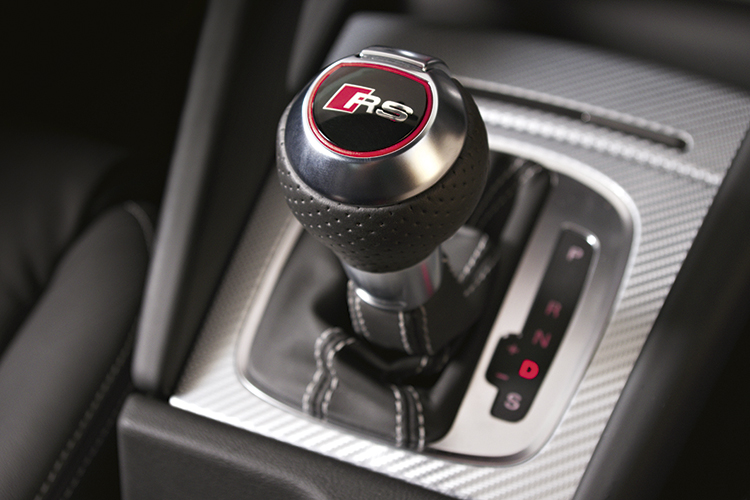 The redline is at 6800rpm but with the throttle floored, the dual-clutch 7-speeder will shift up for you by 6500rpm, keeping the engine in its broad torque band and maintaining the seamless charge toward the horizon.

In terms of pure numbers, the RS3 hits 100km/h in 4.6 seconds (merely 0.3 of a second ahead of the 1M) and will run on till it hits the electronic limiter at 250km/h. With that slick-shifting dual-clutch and mountain of any-rev torque, extracting all of that superb straight-line speed is child’s play. 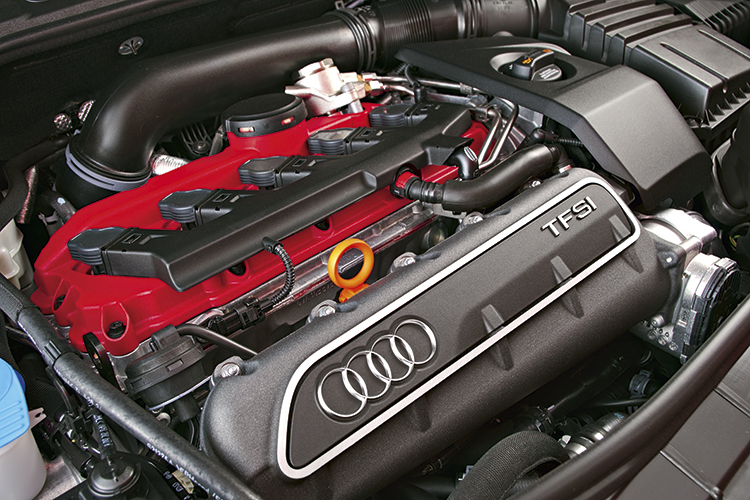 Custom-tuned 2.5-litre 5-cylinder is a powerful performer, but needs to be louder.

Even with S mode engaged, the RS3 is still more muted flat-out than the TT RS. It could certainly do with more aural drama – some crackle and pop on the overrun would be a nice touch and would add some character to the otherwise rather clinical power delivery.

Tackling corners is no harder than exploiting the straight-line potential. The steering is well-weighted and precise, and the RS3 dives into bends keenly, with very little body roll. It remains resolutely planted throughout the corner, with the quattro drivetrain allowing you to pick up the throttle very early and simply punch away from the apex and out of the bend. 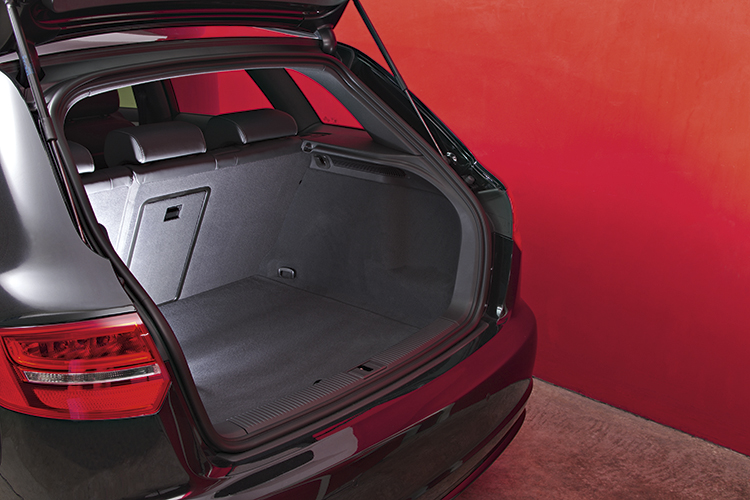 Roomy Sportback boot is a definite plus point.

The RS3 does betray its front-drive roots somewhat, feeling nose-led most of the time. Typically, it’s the front end doing all the work to effect the direction change, with the rear just following along, not contributing to the alteration in trajectory. In most situations, the quattro drivetrain channels the bulk of the engine’s energy forward, with more torque being parcelled to the rear wheels only if the front ones start to slip.

This setup provides great predictability and stability, but at the expense of throttle adjustability and handling balance. There is immense grip and traction, and no matter what you do with the throttle, the tail won’t step out of line. 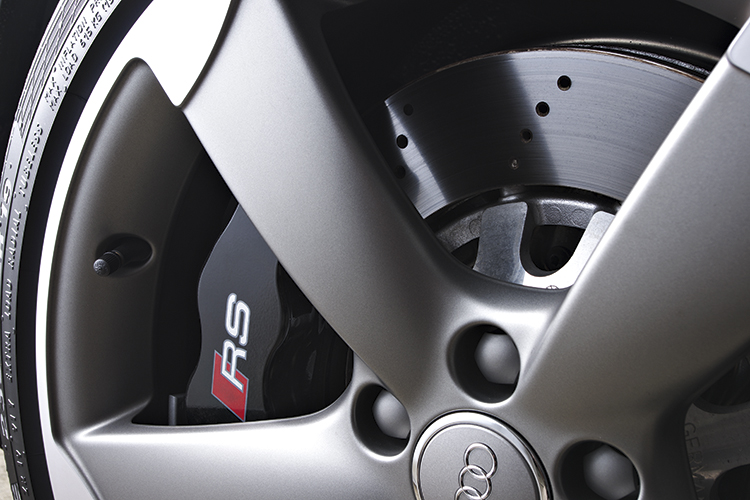 Compared to the Audi S3, the Audi RS3’s front discs are larger and stronger, but its rear stoppers are exactly the same size.

But this come-what-may security also translates into a degree of inertness, which makes the RS3 feel less interactive. At the limit on a really challenging road, the RS3 feels like a very quick, very secure hot hatch rather than a full-blown sports car.

Given its stout resistance to roll and tight body control, the RS3 still rides very acceptably. It does without adjustable damping (something even a Golf GTI has these days), and while the ride is unmistakeably firm, it is not choppy – there is sufficient compliance over bumps and undulations not to jostle the occupants. 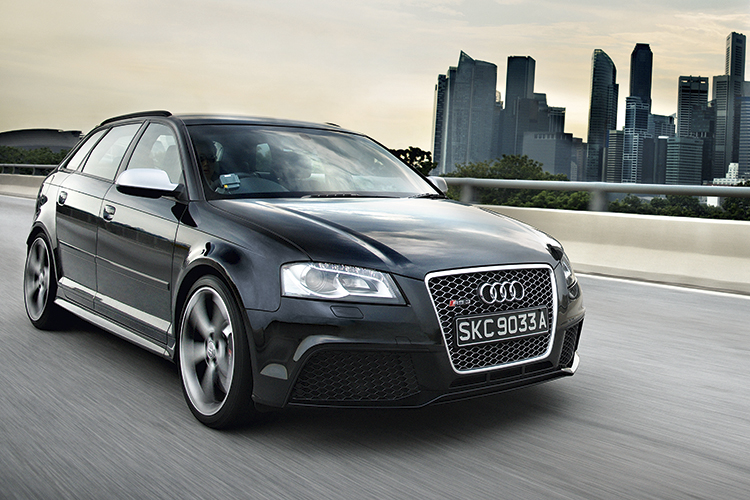 About the only time the ride feels overly harsh is when traversing speed bumps, when there is a need to really slow to a crawl if you’re to avoid spine-jarring impact. Overall, it’s more compliant than the 1M, which is appropriate given that the RS3 is far more likely to be used for family duties than the mad BMW.

The RS3 does what it says on the tin – it’s effortlessly fast and has supreme ground-covering ability, whether on a high-speed highway blast or over the most unpredictable B-roads you can find. 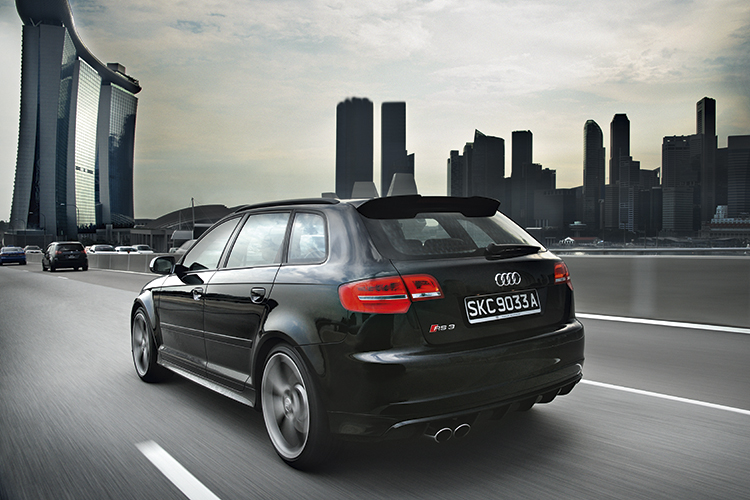 Driving the Audi RS3 quickly is not difficult, but enjoying it wholeheartedly can be tough.

In terms of sheer pace, it’s evenly matched with the BMW 1M, but factor in unfamiliar roads or slippery conditions, and it will probably be faster. And if you want a small, premium-brand pocket rocket with everyday useability, nothing else fits the bill.

But despite all that, the RS3 is still not going to be remembered as one of the great RS Audis, because the way it looks and the way it unleashes its considerable performance merely engender respect rather than desire.