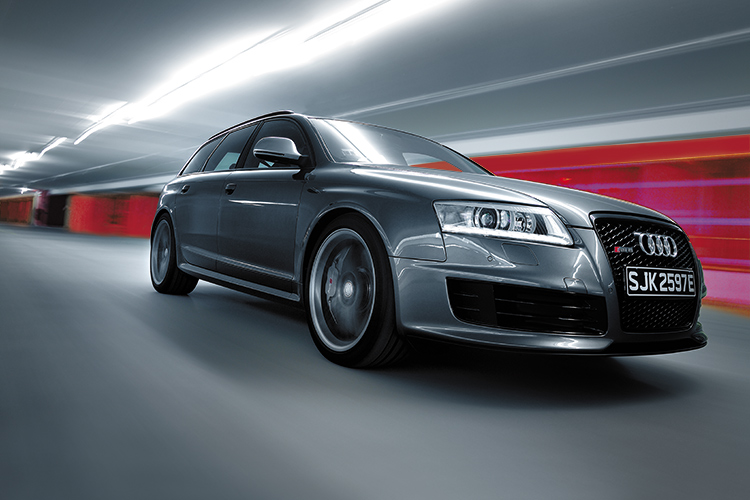 Back in the days of the Cold War, there was always talk of pushing “a red button” and unleashing weaponry capable of unspeakable mayhem.

Or orbiting satellites that can fire lethal laser beams. In other words, the Tom Clancy stuff.

In a car war, the RS6 V10 is that button and the superpowers in the race are Audi, BMW and Mercedes-Benz.

Of course, there’s a whiff of utter irrelevance about a twin-turbo super saloon in this day of eco-wariness and economic uncertainty.

Would you choose an Audi R8 over a Lamborghini Huracan?

Audi RS models have always been the encapsulation of core Audi values.

This is the age when the R8 has hurled the marque into the imagination of the general public.

Exquisitely built and overzealously engineered, even without paying heed to what BMW and Mercedes-Benz have, the RS6 V10 is some piece of work. The car starts life as a run-of-the-mill A6. This is the model that pioneered Audi’s now-infamous single frame grille.

Casting away its penchant for quiet understatement, the A6 signalled the Ingolstadt brand’s intentions to be taken seriously, alongside the more illustrious German marques.

The A6 was a car that was sculpted to perfection.

Every line and crease was carefully considered before being considered again.

The cabin featured new design cues like the superbike-inspired instrument dials and the driver-bias orientation (versus the traditional symmetrical and flat layout that Audi used to favour).

Proving that they even thought over things that didn’t need thinking over, the simple glove compartment release has been worked into an electrically actuated button.

Only the BMW 7 Series of its time managed higher levels of over-engineering.

Apart from that elaborate glovebox, elements pioneered on the A6 have inspired the younger models in the fold.

Of course, Audi has also updated the basic A6 (we are due to try that one next month), but the efforts placed on launching the car back in 2002 pays off in how contemporary it manages to look today. 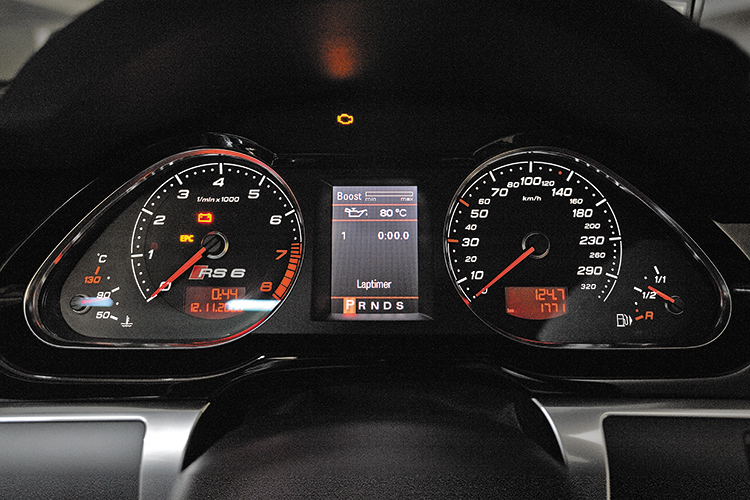 Displays are easy to read, even if you’re going at 200km/h.

Sure, it bears the big front grille (this particular car features the de-chromed option, so it’s black instead of matt silver).

Like the regular A6, it also feels delicately finished.

And like the regular A6 Avant, the car packs a cavernous boot.

Not so like the A6 are the flared wheel arches that the RS6 carries.

Inside, the cabin is drenched in lacquered carbon fibre. The bottom of the steering wheel is flat and the seats have thick side bolsters.

The philosophy behind the RS6 V10 is clearly not one of a stripped-out racer, as it packs almost every conceivable luxury. 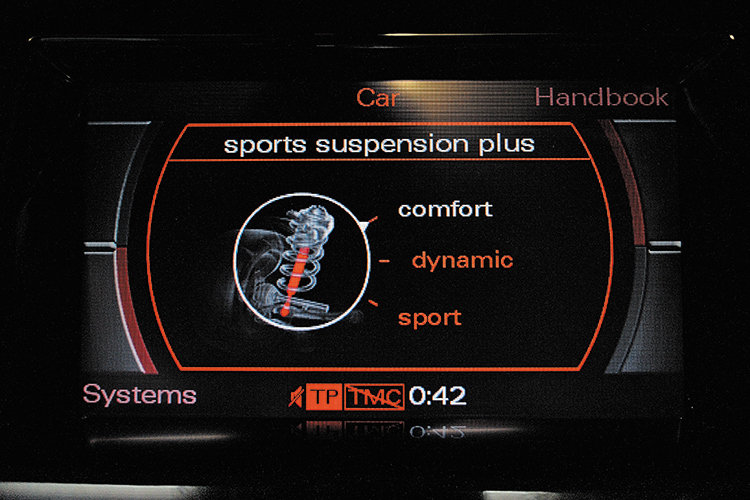 There are remote controls for everything and electric assistance for every conceivable inconvenience.

Living up to the Cold War analogy, there’s also a button. It’s not red but it is marked “Engine Start”.

As innocuous as it may look, Audi obviously thought it to be very important.

So vital is its role that the RS6 V10 is the only car in recent memory to have a separate button to switch off the engine.

The switch is connected to a 5.2-litre V10 engine.

The engine shares its roots with the one used in the Lamborghini Gallardo LP560-4.

But even the mad doctors at Sant’Agata weren’t insane enough to strap a pair of turbochargers as Audi did.

Firing up the engine doesn’t quite erupt the fireworks. 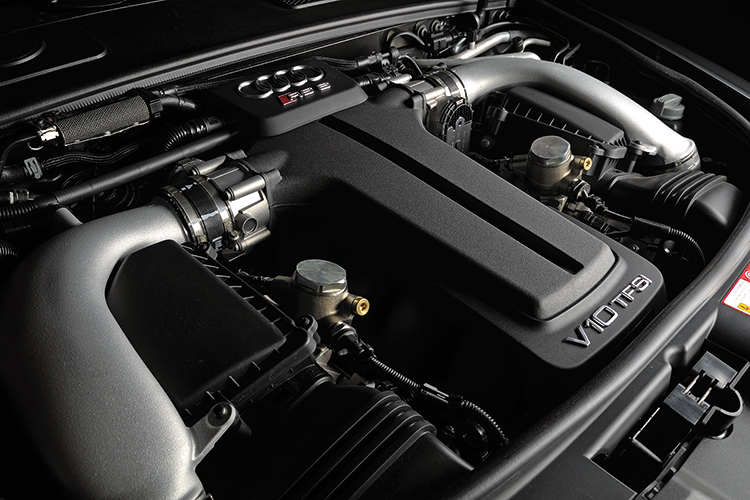 Even the mad docs at Lamborghini weren’t insane enough to turbocharge the 5.2-litre V10.

The sound hints of power, but nothing to the magnitude of 580bhp and 650Nm of torque.

Even on the move, the car – on very moderate throttle inputs – doesn’t feel anywhere as dangerous as the claimed output numbers.

Adding some sense of occasion, if only by fluke, are the optional carbon ceramic brakes fitted on this car, which partly explains the sharp-acting brake pedal.

Often, the car ends up making jackrabbit-like hops, which is awkward and a bit uncomfortable.

If nothing else, this gives the RS6 V10 a perverse supercar-like characteristic.

Over-assisted brakes aside, it’s easy to forget what the RS6 V10 is capable of. 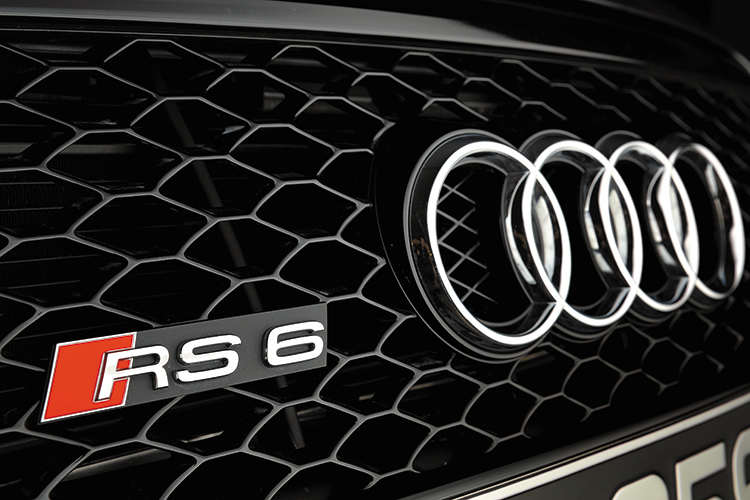 That calmness was just a preamble to the storm, a nuclear winter, the Apocalypse.

Okay, that was a bit of an exaggeration, but flooring the RS6 is akin to unleashing some kind of force of nature.

So full is the torque delivery that it seems as if the instrument dials have had their wires crossed: the speedometer needle climbs like it is reading out the revs per minute while the tacho needle takes its time to climb.

The RS6 V10 is available exclusively with a six-speed automatic.

The car can do its land rocket thing completely devoid of emotion or engagement from the driver, as the previous RS6 V10 was guilty of.

But proving that the boffins have learnt since the previous RS6, it’s not impossible to connect with this monster.

There is a certain delicacy to this sledgehammer of a car, so it never actually feels clumsy on the road.

The automatic box, for one, feels immensely direct. 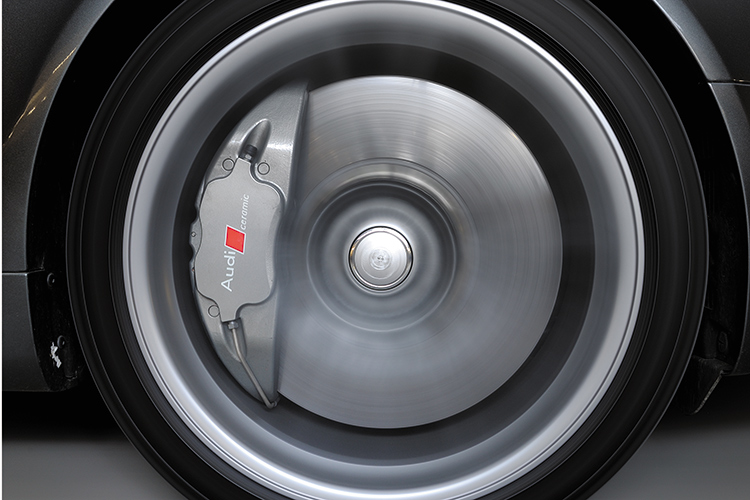 Downshifts are particularly exciting, with matching synced flares of revs.

And when you step on the other pedal, the speedo slams back to zero.

The steering, with its pin-sharp accuracy, makes it easy to place the wheels exactly where the driver needs them to be.

Ultra-wide and low-profile tyres will probably never yield as much feedback as a narrower tyre but there’s no fear of them losing grip.

The suspension plays a big part in keeping the car on all fours.

This particular RS6 is fitted with an optional “Sports” suspension package, which introduces a third option on top of “Comfort” and “Dynamic”.

As it is, the RS6 is perhaps best in “Comfort”.

Even in this cushy setting, it is nimble and responsive.

Working in tandem with the chassis is the car’s all-wheel drive system. 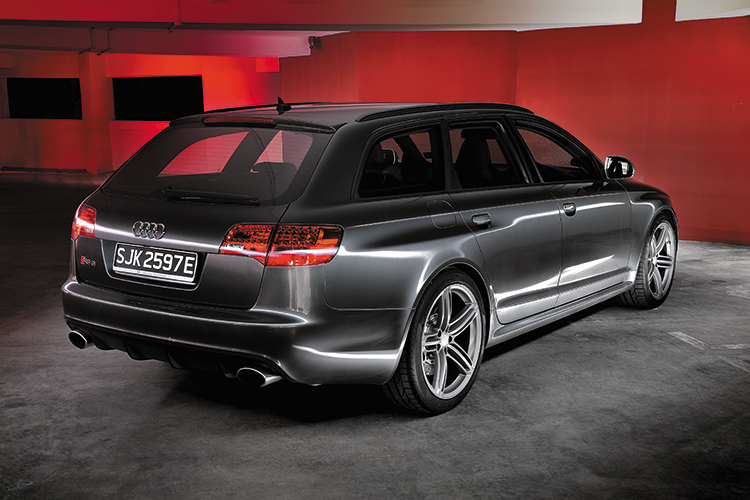 The transfer of drive between the axles is seamless, and it is only on the tighter and more difficult turns that the slight rear-bias torque split becomes apparent, as it helps the car into the apex, maximising exit speed.

Obviously, “Dynamic” firms things up quite a bit to the point of being uncomfortable at lower speeds.

The steering sharpens up with the firmer suspension but there are no gains in terms of feedback.

And unless it’s a getaway car in a bank heist, it’s unlikely anyone will really need the additional amount of body control that comes with “Sport”.

On the road, the unnecessary firmness can even feel jarring.

Of course, things may just feel very different when we put the car on the track (that’s due to happen in the next few weeks).

But at legal road speeds, the RS6 V10 is almost too polite to be a supercar slayer.

Well, like in the Cold War, all it takes is one simple push of a button and all hell breaks loose.