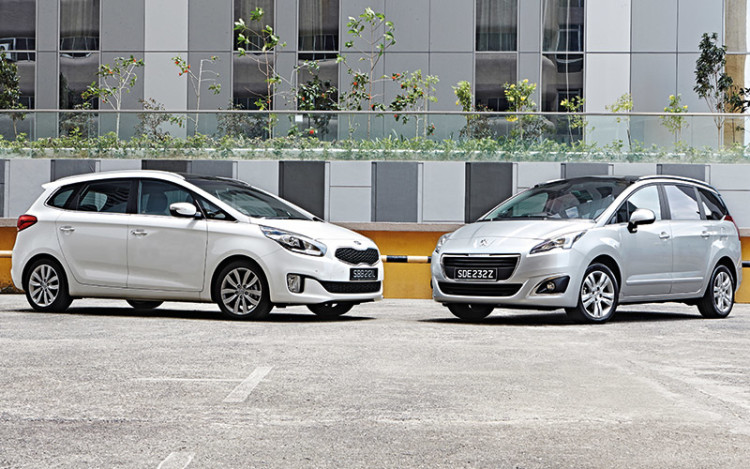 Most enthusiasts dislike multi-purpose vehicles (MPVs), because they usually have uninspiring designs and deliver a humdrum driving experience.

The two MPVs we’ve gathered here, however, look pretty decent and are actually quite pleasant to drive.

The latest Carens has more attractive styling than its forgettable predecessor. Its nicely sculpted flanks and “tiger” face (Kia’s design signature) give it greater road presence than the previous model.

(Click here to read our Group Test between the Kia Carens and Chevrolet Orlando.)

The Carens’ “fierce” styling makes the Peugeot 5008 seem rather meek, which is ironic, considering that the French brand’s logo is a lion.

Thanks to a recent facelift, the 5008 doesn’t appear too dated, despite having been around since 2010. And it still looks unique, thanks to the slim headlights and ultra-compact tail-lamps. 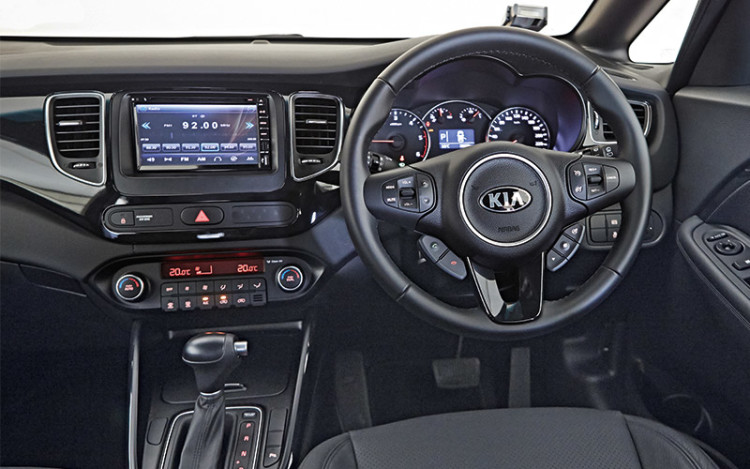 The Carens’ longer wheelbase, however, isn’t apparent in the second row, where both cars provide the same amount of legroom. But the Carens’ rear bench, with its taller backrests, is more comfortable than the 5008’s.

The Peugeot claws back points by having its rear air-con vents situated in the B-pillars, as opposed to the centre console for the Carens.

Occupants in the 5008 can also adjust the air-con’s fan speed, whereas passengers in the Carens will have to ask the driver to do the same for them.

In terms of practicality, the 5008 offers more storage points than its rival. Apart from the generous doorbins, there are two compartments beneath the floor of the backseat – great for keeping valuables hidden. 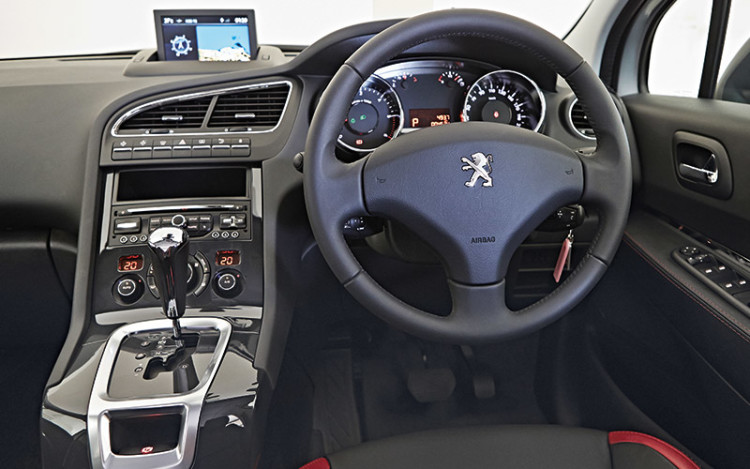 5008’s cockpit has cooler amenities than the Carens’.

Not so great, however, is the tricky access to the 5008’s last row of seats. The car’s shorter wheelbase means the second-row seats can’t be slid as far forward as the Carens’.

Third-row legroom in both cabins is only adequate for small children or very petite adults. The Carens, however, has wider seatbacks, giving it a slight edge in comfort.

Folding the Carens’ seats is also more intuitive than doing the same in the 5008. The Pug’s seats could even potentially injure fingers if you’re not careful, as our senior designer discovered.

The Carens has the edge in engine output, too, but higher figures alone don’t determine an MPV’s overall performance. When you’ve got seven people on board, it’s low-end muscle that matters most. 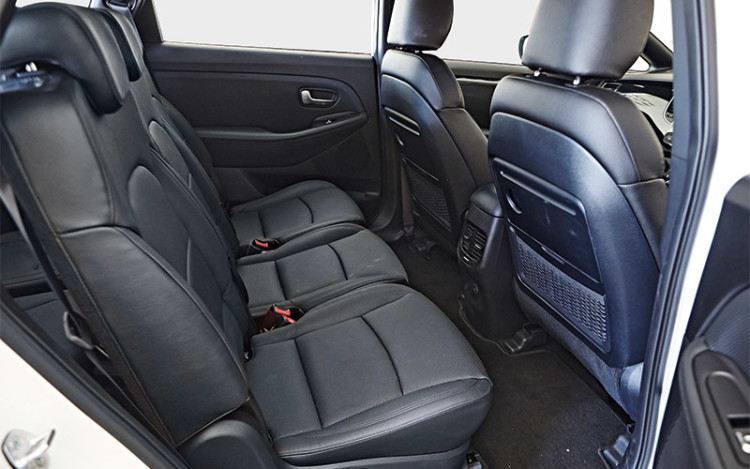 But since the 5008 delivers its maximum torque at 1750rpm, it feels sprightlier than the Carens when moving off the line. In fact, at low to moderate road speeds, the Peugeot’s performance is superior to the Korean’s.

I also like the 5008’s head-up display, easier-to-reach gearshift lever and weightier helm.

Less likeable, however, is the 5008’s tepid midrange performance. With just 120bhp and a 0-100km/h time of 14.8 seconds, overtaking manoeuvres on the expressway have to be planned in advance.

The Carens driver, on the other hand, has 141bhp on tap and enjoys a quicker century sprint time of 11.3 seconds. This MPV’s driveability is further enhanced by its 7-speed dual-clutch gearbox, which is quicker than the 6-speed automatic of the 5008.

Unlike the 5008 and its permanently weighty helm, the Carens is equipped with Kia’s Flex Steer system that offers three different steering assistance levels (Comfort, Normal and Sport). 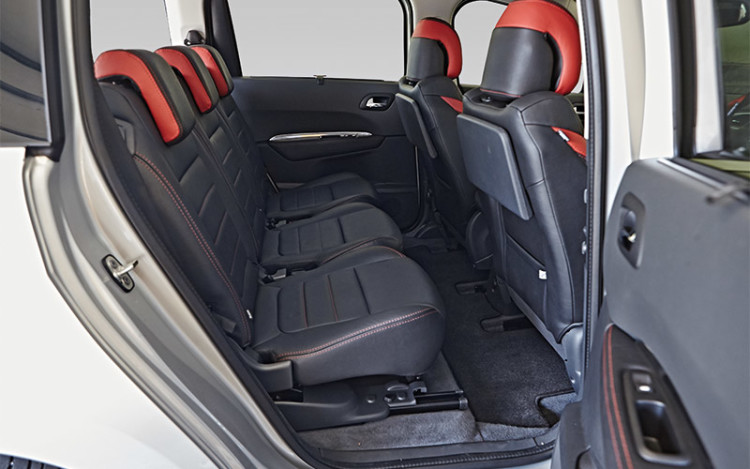 5008’s bench is more ideal for kids and kiddish adults.

Both cars ride on 17-inch tyres as standard. But when it comes to daily ride comfort, the 5008 is still more pliant than the Carens, whose dampers are more handling-biased.

Each of these two “sole trains” is suited to a specific type of MPV driver. The Carens will please the keener driver, while the 5008 appeals to the driver more interested in comfort and efficiency.

Now the question is: Which type of MPV driver are you? 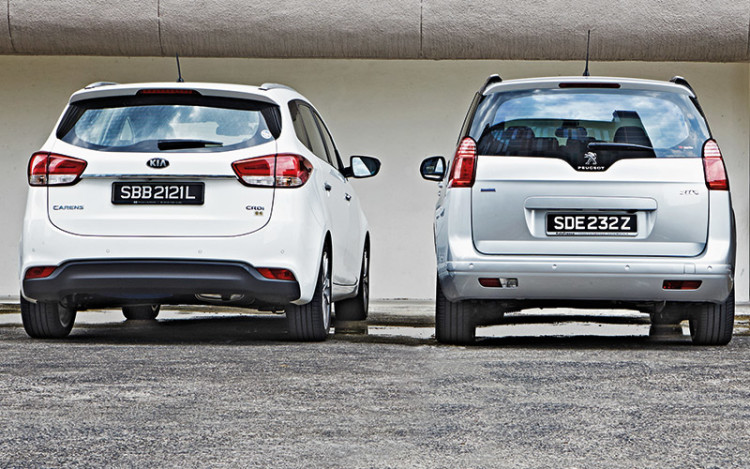