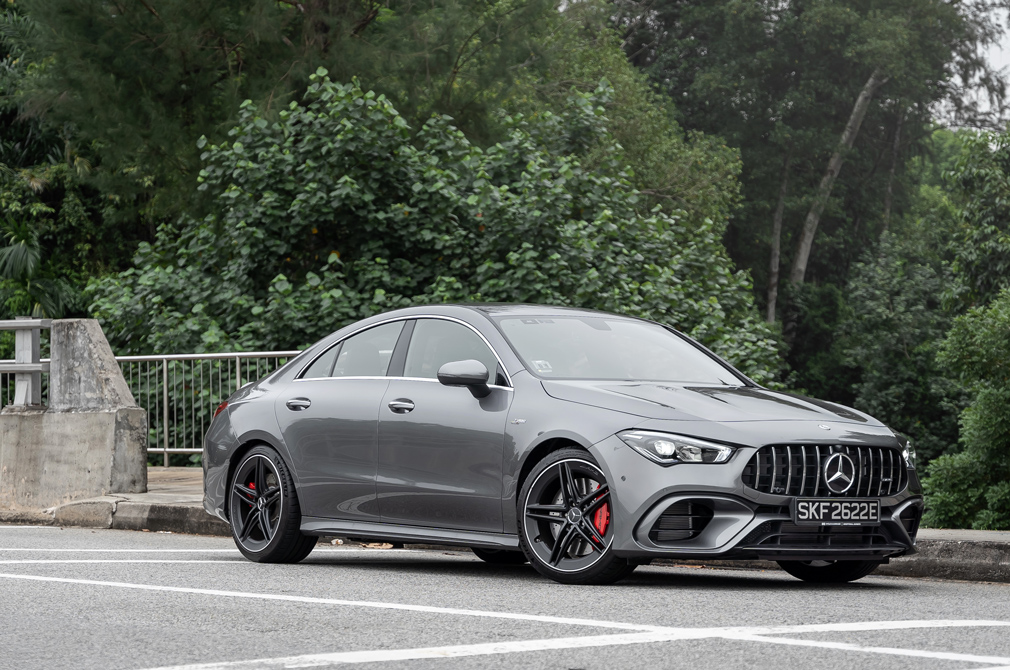 Bellicose. Petulant. Hostile. These adjectives accurately describe the last-generation A45 and its sibling, the CLA45.

This bonkers hot hatch and equally crazy four-door coupe were born with chips on their shoulders.

Two minutes behind their wheels and you realise that they brim with anger and perhaps a touch of insecurity, eager to prove that they are just as good – if not better – than their more powerful V8-engined siblings.

It feels like the A45 and CLA45 were slighted by their AMG relatives. Stung, they act out in defiance. Their turbocharged 2-litre engines produced 360hp, which was later upped to 381hp following a facelift.

The “45” powertrain was noted (and notorious) for delivering thunderous “cracks” during upshifts. Keep the tachometer needle past 4000rpm as you pull back on the paddle and it will sound like the engine just split the exhaust manifold in two.

It is both glorious and obnoxious. The cacophony can lead to police reports being made. But petrolheads will fete you. 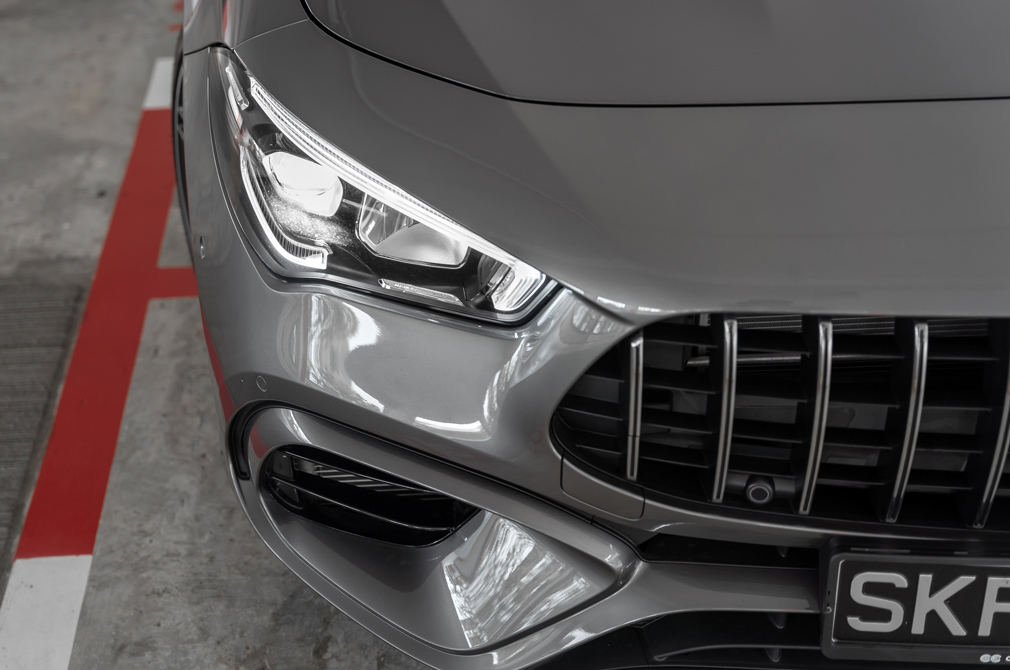 With the last-generation CLA45 having such a reputation, what was Mercedes-AMG going to do with its successor?

This is the most powerful production turbocharged 2-litre 4-cylinder. I am pretty sure it will be eclipsed in due course. Perhaps by AMG. Cross-drilled AMG brake rotors and red callipers look ready to bite – hard. At the rear, quad-tailpipes integrated into the diffuser look prepared to call LTA officers to your carpark.

Indeed, the Mercedes-AMG CLA45 S looks aggressive. But there is something different this time around. Perhaps it is because the current CLA model, with its shark-nose design, looks more refined than before. This makes it seem like the junior version of the CLS grand tourer.

IN THE HOT SEAT

Settle into the driver’s seat and it does seem like the Mercedes-AMG CLA45 S is “softer” than before. Gone are the flashy red trimmings that surrounded the air-con vents and marked the 12 o’clock position on the steering wheel.

That said, you will still be “seeing red”, as the hue is splashed on the seat centres and door panels. And if you’re bothered by the lack of colour around the air-con vents, don’t worry. The mood lighting will take care of that.

In fact, you can use the mood lighting to make the whole cabin look like it was inspired by the fictional planet Mustafar from Star Wars. 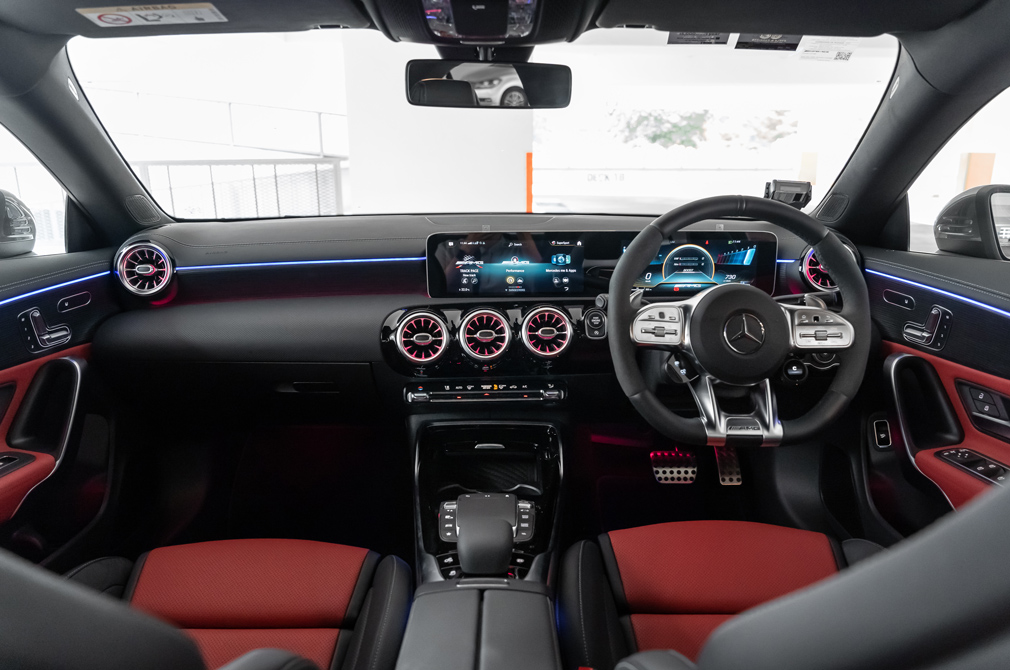 The CLA45 has not been “left behind” by its older siblings. Components such as MBUX and fiery mood lighting are standard, too.

Like other Mercedes models, the Mercedes-Benz User Experience (MBUX) is present here. A pair of 10.25-inch high-resolution screens are your interface for the infotainment system and instrument panel.

The latter lets you choose from several different meter layouts, from the traditional two-dial “analogue” gauges to various digital ones, depending on the type of readouts you prefer.

Mercedes’ drive mode dial, which used to be on the centre console, is now conveniently located on the steering wheel, along with the controls for the exhaust valve and stop-start system.

Delve into the drive menus and you will find a long list of settings, which include Drift Mode and AMG Dynamics, which lets you tweak the stability control settings. Choose “Pro” for the latter and the car will gladly display its tail-happy character. 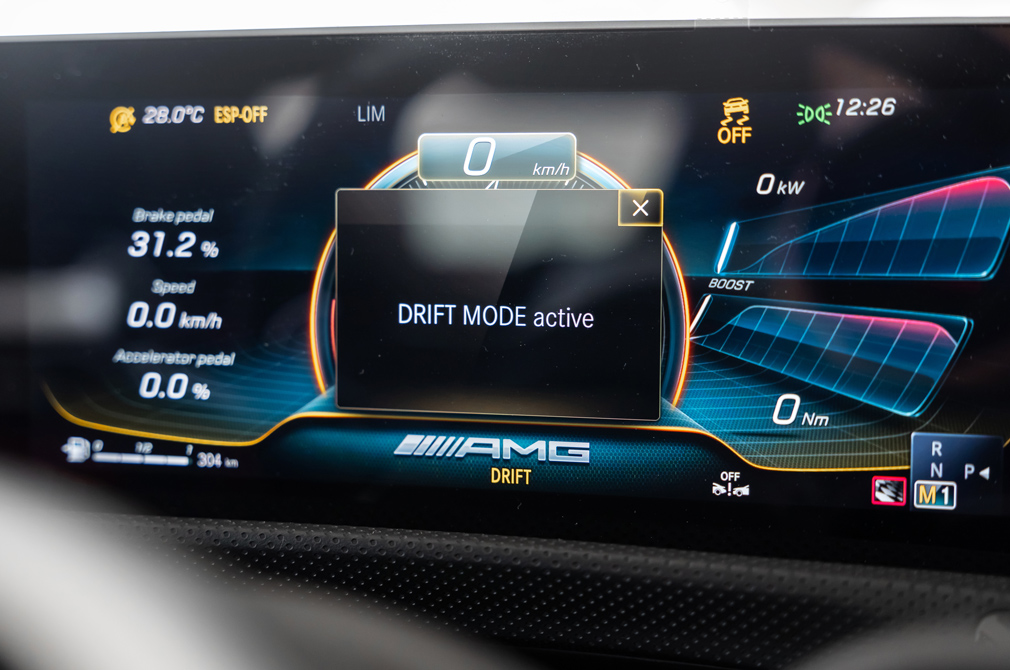 ROCK, INSTEAD OF HEAVY METAL

With more German horses at its disposal, you would expect the Mercedes-AMG CLA45 S to be even louder and more uncouth than before.

Surprisingly, this is not the case. In fact, the CLA45 S is now polished and shows a surprising degree of maturity.

Cold starts are still loud and grumbly. But even with all the settings at their sportiest, the CLA45 S is no longer a brooding teenager with a short temper.

There is no doubt that the car is quick. Zero to 100km/h in four seconds is staggering, especially when you consider that the preceding model took over four seconds.

To make it go even faster at this level takes an even greater amount of effort compared to making a car with an eight-second century sprint time quick enough to do it in six. 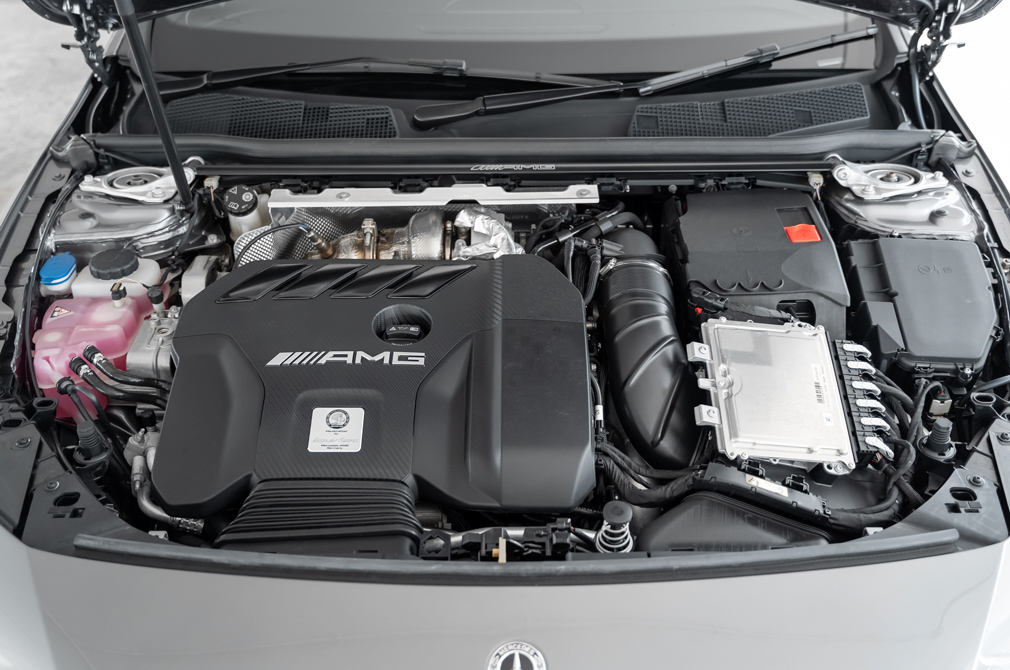 But while the Mercedes-AMG CLA45 S is fast, it no longer feels as manic or maniacal.

AMG engineers have succeeded in making the turbocharged motor feel like a naturally aspirated one. You must rev it to 5000rpm to get the kick-in-your-pants feeling. Below that, the CLA45 S feels like it is cruising.

Perhaps the real reason for the CLA45 S’ more tempered disposition is its weight. Sans driver, the car already weighs in at 1675kg, which is surprisingly hefty. I expected it to weigh between 1400kg to 1500kg.

Don’t get me wrong – the car is rapid. But I’m missing the sensation of speed and the raucous soundtrack.

You could dial up the drive settings to Sport+ or even Race, but while the car gets louder, it no longer aims to scare you silly.

Even at the sportiest settings, the ride quality retains a bit of pliancy for everyday drives. In contrast, the previous CLA45 feels stiff and high-strung. If the driver made a mistake and drove over a pothole, the passengers were promptly punished. This is no longer the case.

Flogging the Mercedes-AMG CLA45 S is still fun, of course. There is no corner it cannot dominate, and you are welcome to be ham-fisted going about it, too. 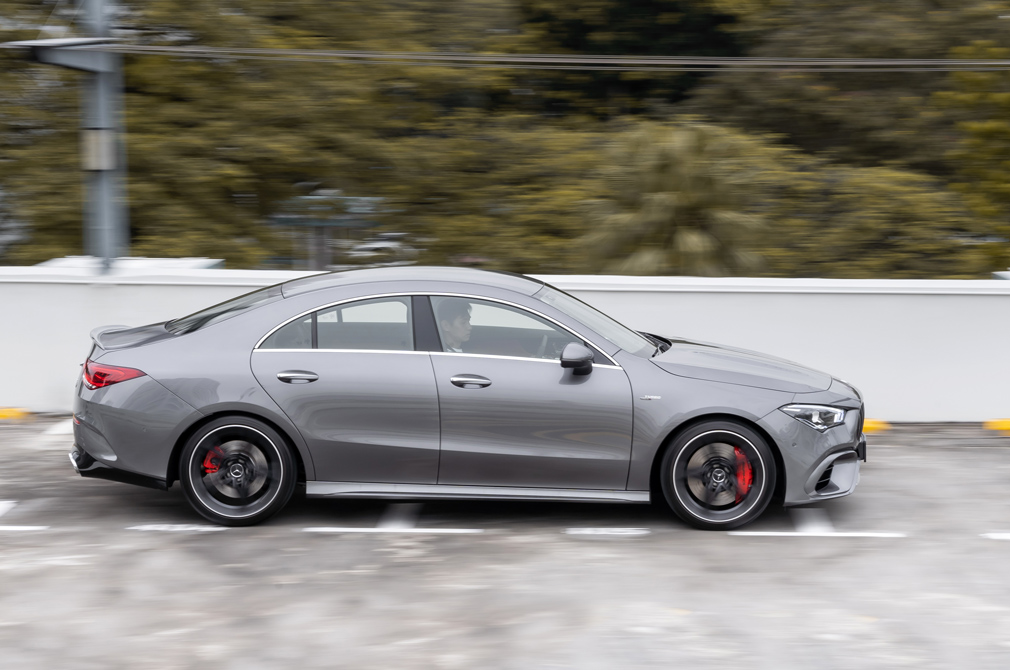 The 4Matic+ system can fully vary the torque split between the front and rear axles, helping the CLA45 S remain as surefooted. Those sticky Michelin Pilot Sport 4S tyres a further help in this regard.

You can arrive at a bend too quickly, slam on the brakes and yank the wheel, and the car does the rest. You’ll even be forgiven for putting the power down hard mid-corner.

The real surprise is how rewarding the car is to also drive properly. Time your braking, turn-in and exit right, and the car flows. With the 8-speed dual-clutch in manual mode, using the paddle shifters is a delight, as the engine responds with blips to your downshifts.

But if you were hoping for an even more obnoxious “crack!” or “bang!” during upshifts, you’ll be disappointed. Though loud, this part of the soundtrack is no longer as boisterous as before.

Once akin to a teenager who stays out all night listening to heavy metal or even death metal, the Mercedes-AMG CLA45 S is now like an adult who attends a rock concert, but comes home in the wee hours following the after-party. 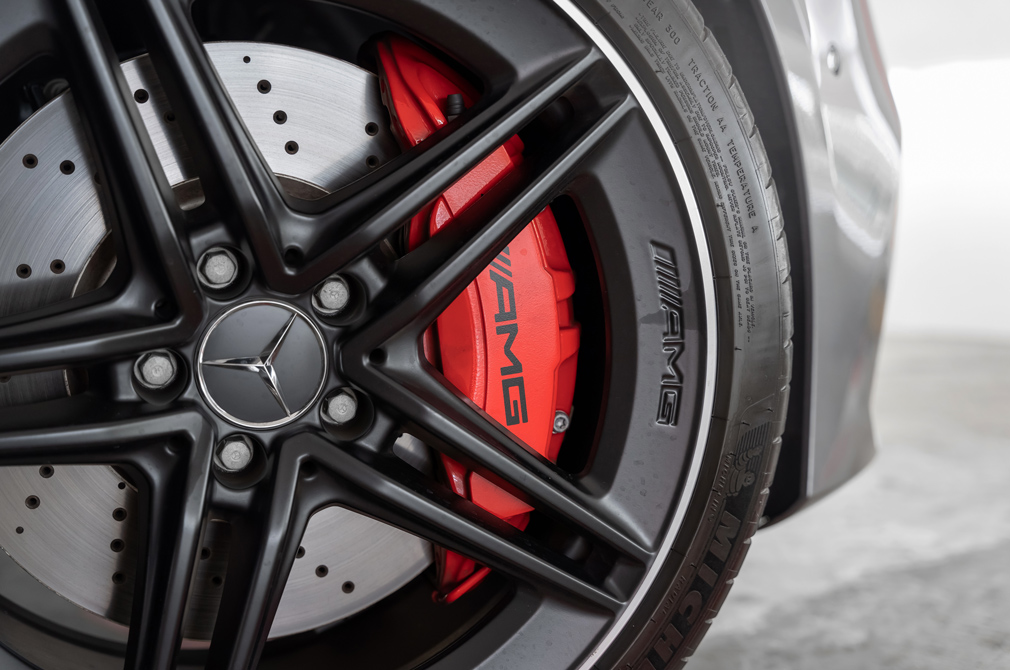 The Mercedes-AMG CLA45 S can be heaps of fun to drive. You just need to exploit it the right way.

Thing is, the car’s more polished character may not please customers who owned the previous model, which was bellicose, petulant and even downright hostile.

That said, being less offensive does give the CLA45 S a key advantage over its predecessor: Police reports are unlikely to be made against its owner. 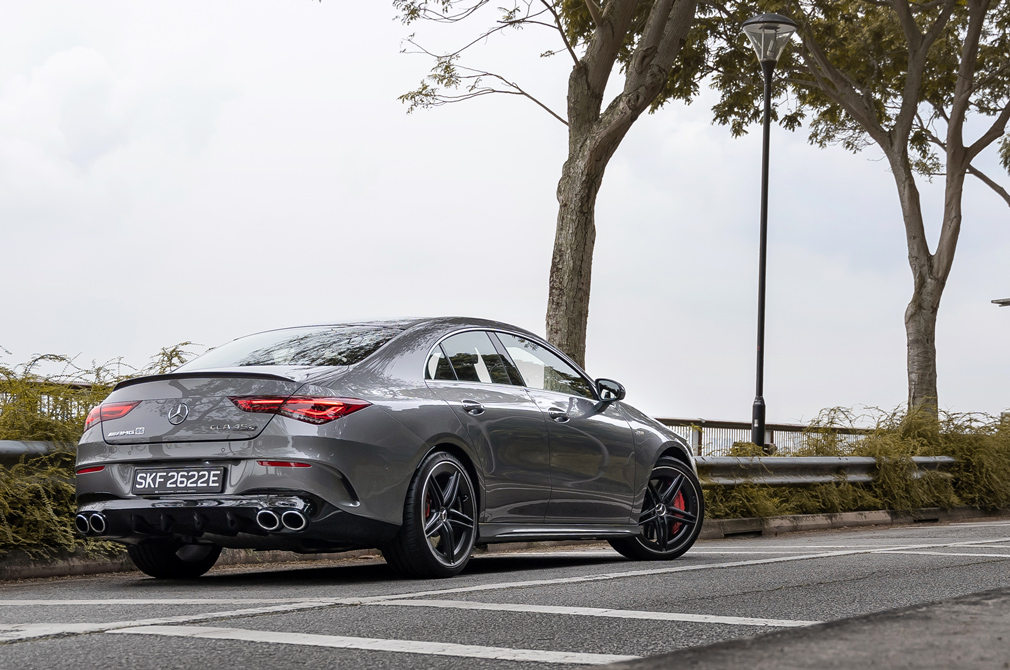 The Mercedes-AMG CLA45 takes on the CLS63 AMG in this Group Test
We pitted the last-gen CLA45 against the Audi RS3
Mercedes-AMG A45 is a bonkers hot hatch
Want something more relaxed? We review the Mercedes-Benz CLS here