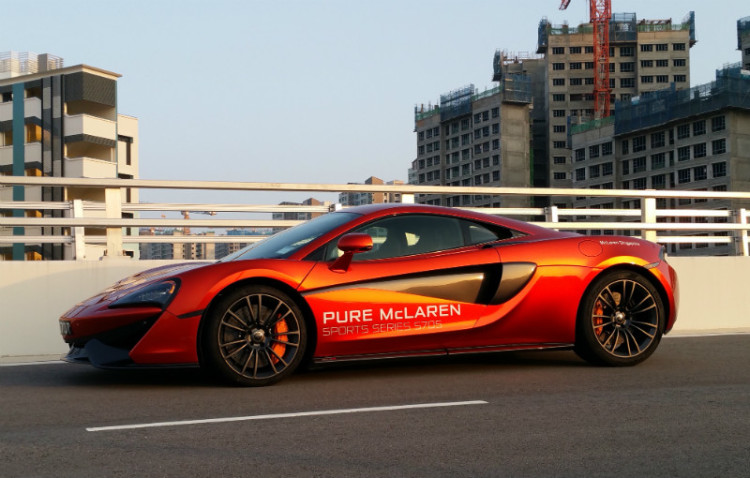 McLaren is proving to be a master in product packaging.

In five short years, it has rolled out no fewer than 10 models based on the same engine and transmission combo, laid out in one common platform.

Yet, to say the cars are all too similar would be inaccurate. Its designers have given each car distinctiveness and nuance. Each is unmistakably McLaren, but each still stands out from the others in the stable.

The same could be said for driving characteristics. There is only so much you can do with a 3.8-litre twin-turbo V8 paired with a seven-speed dual-clutch transmission, yet McLaren has managed to make interesting variations to it.

In the case of the recently unveiled 570S, the company has pared the frills to create a lighter, simpler and more accessible racer.

(Click here for a review of the Lamborghini Huracan LP580-2.)

Hard numbers aside, this McLaren impresses mostly with the way it makes you feel when you are inside the car.

First and foremost, the car is accessible in more ways than one.

Even though its sunken carbon tub construction makes it really close to the tarmac, getting in and out of the car is almost as easy doing so in, say, a Mazda MX-5.

And if you are feeling a little heavy around the middle, you can always grab hold of a handle on the swan door to ease yourself into the driver’s seat – and in one movement, close the door as well.

The cockpit is typical of McLarens – friendly and fairly easy to navigate. You cannot see the nose of the car, but that does not mar the driving experience.

The 570S is very nimble, moving exactly the way you want it to. It weaves through traffic and imaginary chicanes as flawlessly and as tenaciously as a Lotus Exige. More importantly, it evokes kart-like sensations in the process.

Its meaty steering has less assistance than what most other sports cars have today, giving it directness and a rare dash of old-school charm. It is a gem of a steering, which the car owes its uncommon agility to.

Its brake pedal also reminds you of the days when brakes were not assisted. This is most apparent when you step on it to fire up the engine. Often, it is almost as if you need to put your whole weight on the pedal.

Besides that, the only other function that is less than ideal is the car’s electric memory seat. It does not return to its pre-set position automatically when you get in the car and its motors are noisy.

The car’s V8 makes a lot of noise too, but they are generally the kind of sounds you want to hear in a sports car. When cruising, the notes are a bit monotonous, with less variation and texture than a Ferrari’s. But when you floor the accelerator, the 570S belts out an aria that deserves a standing ovation.

Acceleration is lethal – the sort that sends too much blood to your head too fast.

The car offers a nice blend of ride and handling too. Despite not having the complex self-balancing hydraulic suspension of its loftier siblings, the 570S is comfortable in normal drive mode for a racer.

And even in this “soft” mode, it handles cornering forces with aplomb, thanks to its wide tracks, low centre of gravity and that wonderfully tuned steering.

The car feels relaxed and confident at high speeds and that is McLaren’s strong suit. There are more powerful cars out there, but most require the driver to work a little harder at the wheel.

In comparison with its siblings, the 570S could well be the fastest McLaren an average driver can savour in the real world.