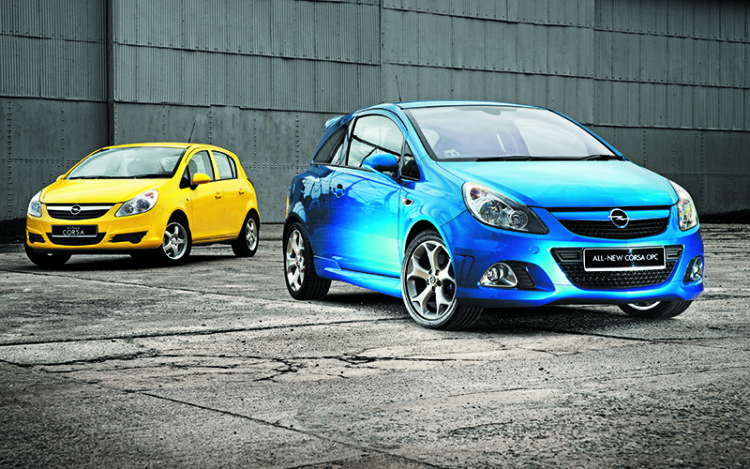 Packing some 192 bhp and 230 Nm of torque, the Opel Corsa OPC claims a century sprint  time of just 7.2 seconds. It is Opel’s answer to the likes of the Mini Cooper S, the Renault Clio RS and the Italian retro hotshot, the Fiat 500.

Cynics may wonder: Who asked Opel to make a Cooper S/Clio RS/Fiat 500 contender in the first place? But looking at the premium pricing that Renault and the likes are placing on their hot hatches, Opel found all the motivation it needed to build a hot Corsa. 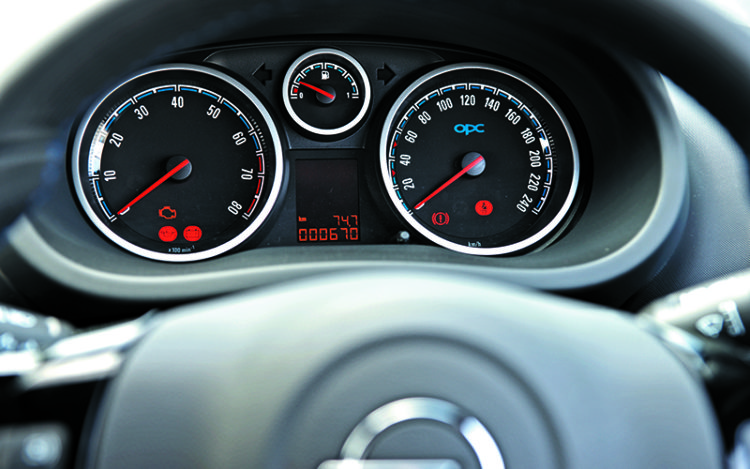 As things go, Opel isn’t charging superlative dollars for the OPC. Being represented by the same company that also runs the Mini dealership sees the OPC playing the wingman’s role to the Cooper S in conquering the market for performance hatches. In fact, not only is the OPC a good deal less pricy than the Cooper S, it also undercuts the likes of the 500 and Clio RS.

Of course, the value notion isn’t as high a consideration for a car like this as it would be for a sensible family sedan. Still, the $10,000 savings that Opel is waving against the French offering – and more against the retro-chic Fiat – is significant.

For the record, OPC stands for Opel Performance Centre, not “Off-Peak Car”. In the grand scheme of things, it’s a name conferred on the fastest and meanest of Opel road cars – like “RS” is to Audi and “M” is to BMW. As part of a dedicated branding and division of its performance models, the OPC is a far more concerted effort than the GSi models that Opel sold here in the late 1990s.

In fact, OPC is Opel’s best hope at recreating the Lotus Carlton wundercar. (Built by Lotus off the Opel Omega/Vauxhall Carlton – a rather staid executive sedan from 1990 – the Lotus Carlton had a 377bhp, 3.6-litre twin-turbo and was the fastest production sedan of its time.) 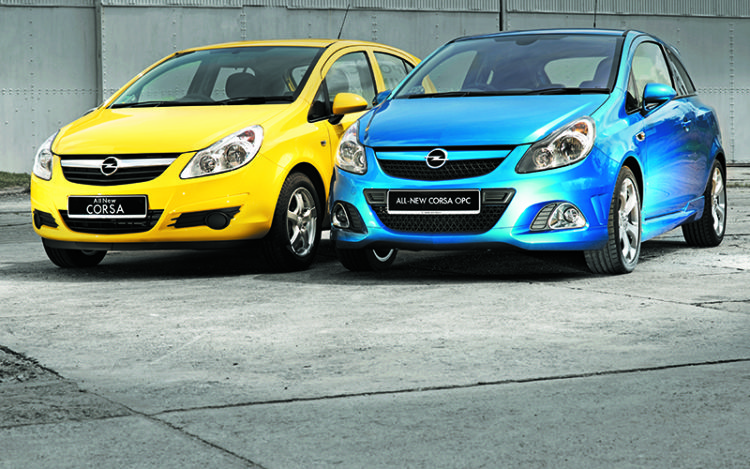 Just so no one will miss the car coming, the OPC is decked out with every single look-faster cue that has appeared in the past 20 years. The recesses in the headlights are darkened while the tail-lamp clusters are given the smoked treatment. On its roof sits a wing that’s large enough to shelter a nest of sparrows. There are chrome embellishments around the signal repeaters and matt silver finish is splashed around the XL fog lamps.

There’s more: The bumpers are assaulted with aggressive slates on the edges. The rear bumper even incorporates a diffuser, not unlike the Clio RS. Right in the middle of that diffuser is a single, comically oversized triangular exhaust tip. The triangle theme echoes on the wing mirrors, which happen to be slightly smaller than those on the regular Corsa. Rounding off it all are 17-inch alloy wheels that look like items found on the Lamborghini LP640. 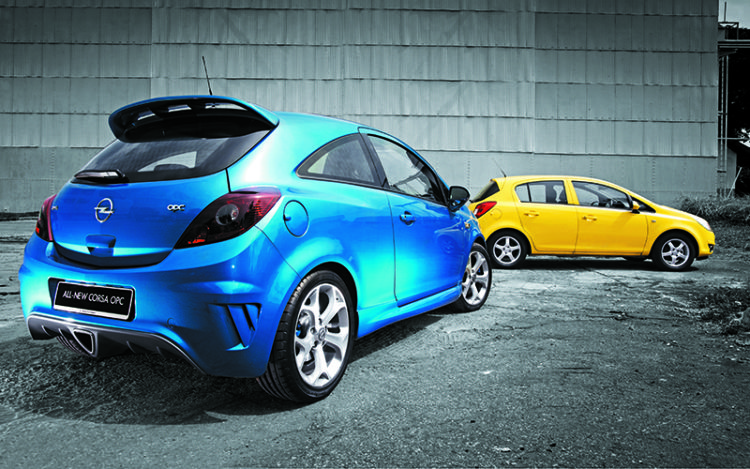 While styling efforts like these reek of tackiness on, say, an Astra, the OPC’s compact dimensions and pert proportions manage to make the wackiness work. 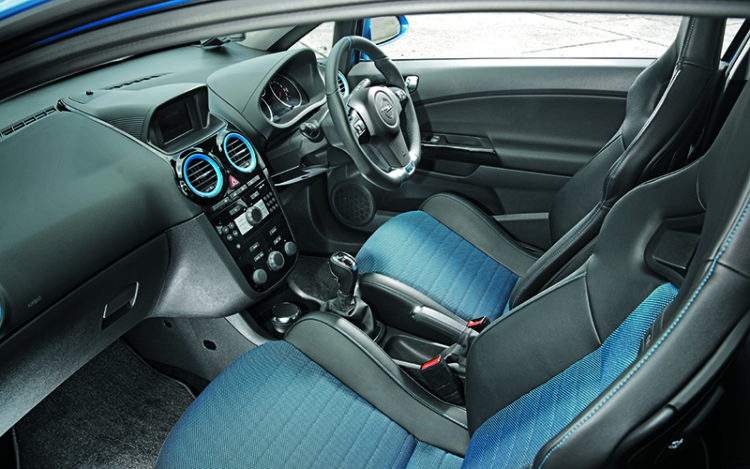 The (over)enthusiasm continues in the cabin, with more OPC insignias than “No Smoking” signs in a food court. With everything else, if it’s not dressed in the same shocking blue shade as the exterior, it’s finished in matt silver, which is the second fastest-looking colour for vehicle interiors today. (The fastest, if you need any prompting, is carbon fibre – dry, faux or otherwise.)

What’s gold, by hot hatch standards at least, are the body-hugging Recaro seats (similar to the ones found in the Clio RS and the Volkswagen R32), the compact and leather-wrapped steering wheel that’s flat at the bottom (like the one in the Golf GTI) and the presence of a traditional manual gearshift. 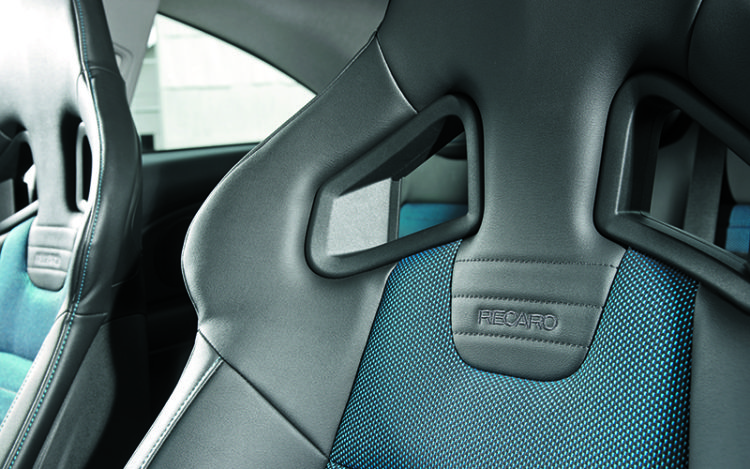 Going some way to prove how serious Opel is (and probably to help keep the price down), the car is only available with 6-speed manual transmission.

Of course, the gearshift is as dressed up as the rest of the cabin. It’s a tall and shiny item with the knob emblazoned with the OPC emblem. The shift action betrays the OPC’s friendly supermini roots, where the throws are light and long and the gates feel a little too wide to feel sporty. Rather surprisingly, the turbocharged 1.6-litre engine isn’t as peaky as expected for a unit that musters 192bhp. 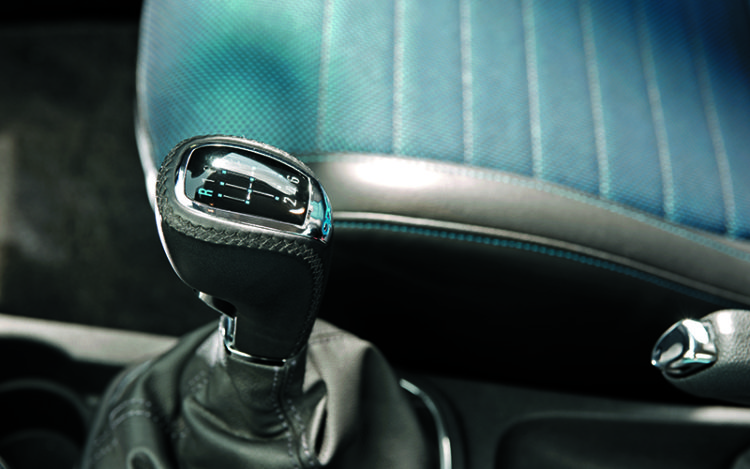 It betrays none of the masochistic tendencies of the naturally aspirated 2-litre in the Clio RS, which only works when spanked. In fact, the OPC’s engine doesn’t need much nudging to shift the car smartly.

Things get really interesting when the turbo comes on song. The little engine makes good “rorty” intake and exhaust noise, and the increments in power are always very linear. This definitely helps driveability and goes some way to mask the sheer volume of power that’s going to the front wheels. 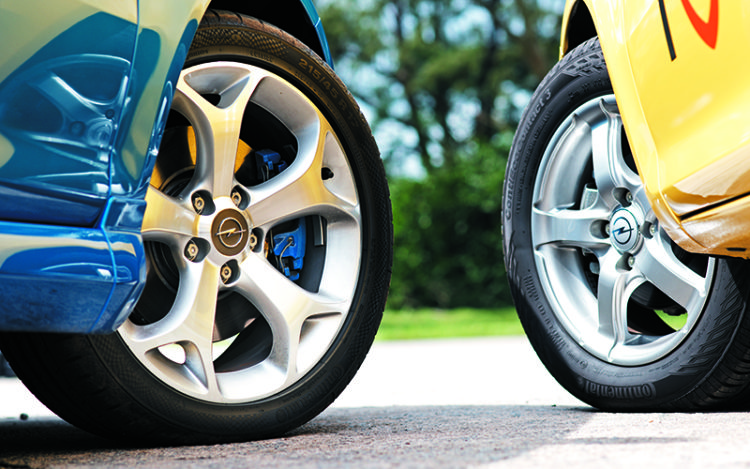 Although the OPC uses wider and more performance-oriented rubbers than the Corsa 1.4 (215mm Continental SportContact 3 versus 185mm EcoContacts), the wheel track is no wider than the standard Corsa’s.

The suspension, though, is lower and firmer than the standard Corsa’s to cope with the higher-performance levels and handling demands. Still, the suspension is anything but harsh. In fact, there’s still plenty of that sweet pliancy that’s distinctly similar to the standard Corsa. The setting is probably as firm as Opel can make it because even in this relatively mild suspension setting, the front wheels can sometimes hop a little when accelerating over mildly pockmarked roads. Having the suspension set-up any harder and the car will, in all likelihood, be dashing into the nearest ditch, tree or cow at the first squeeze of the throttle.

The steering set-up has also been upgraded over the standard car, with a more aggressive ratio built into the initial turn-in. The relatively compact wheelbase further accentuates agility. The brakes, too, have a more assuring bite than the normal car. The stability control system has a delightfully liberal approach in its governance. So unless the car is really in trouble, the system rarely intervenes. It can also be completely deactivated, should you be feeling adventurous. 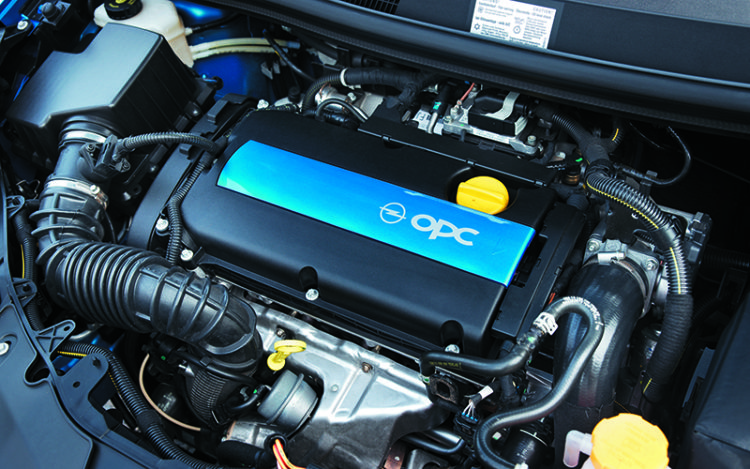 The set-up seems primed for an enthusiastic drive – and it mainly does. The OPC is a frisky little thing that can make you smile.

But against the likes of the pricier Renault and Mini, the OPC feels like a puppy that’s eager to please but hasn’t mastered all the tricks. Its controls seem that little bit more synthesised, while the responses are a wee bit reserved. You’ll want the chassis to flow that little bit more to match your enthusiasm.

Still, the OPC does have something the current benchmarks don’t. On top of its attractive pricing, allocation for Singapore is extremely limited (we’re talking about only a handful). As an exclusive hot hatch that’s prefect for starting out? Sure, let’s play. 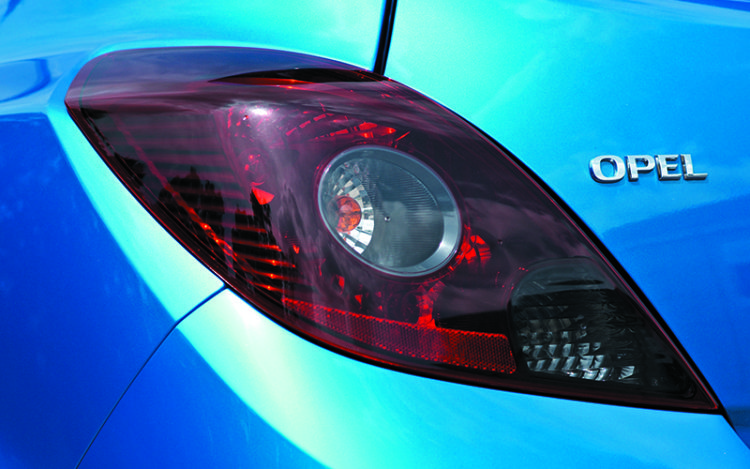