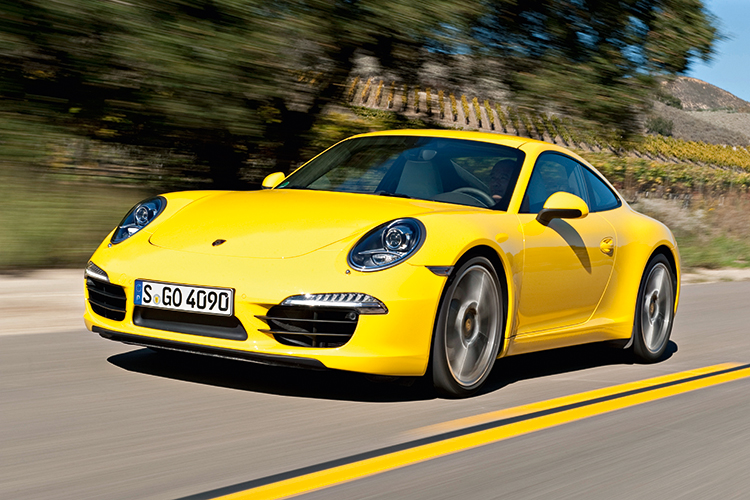 In the last 50 years, there has never been a product so enthusiastically honed to perfection. Over six generations of 911, Porsche has kept its kingpin model ahead of the class with a host of clever upgrades and, every two generations, a whole remake. This “seventh” 911 resembles the “sixth” one, but has an all-new outer skin and 90 percent new content.

The car’s construction is still primarily sheet metal, but the combination of ultra-high-strength steel and aluminium for nearly half of the bodywork results in a body-in-white that is 80kg lighter than before. The kerb weight of 1.4 tonnes for the new 911 Carrera PDK is merely 45kg less than that of the 997 equivalent, but had the 991 been made with 997-era know-how, it would have been nearly 60kg heavier. 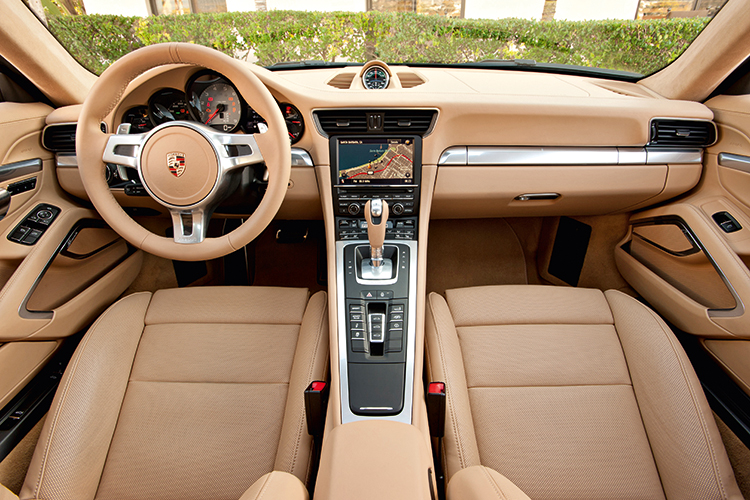 Only the emblems on the wheel and key chain were carried over from the 997 model.

This new body is slightly lower by 7mm and longer by 56mm. The most significant change is to the wheelbase, which has been lengthened by 100mm to improve driving stability and interior space (not that you can now seat two adults in the back). Overall width is the same, but the front track has been widened by 50mm to better match the rear end.

As always, the flat-6 engine sits just aft of the rear axle line, and it currently offers two states of tune. The base unit is a 350bhp 3.4-litre which, coincidently, is about the same size as the 996 model’s base engine when it replaced the 3.6-litre motor of the 993 in 1997 and marked the end of Porsche’s air-cooled boxer. Of course, the newcomer offers more power and torque, although the increases look marginal when “calculated” over 14 years. Still, the latest Carrera with PDK does the century sprint in a brief 4.6 seconds. 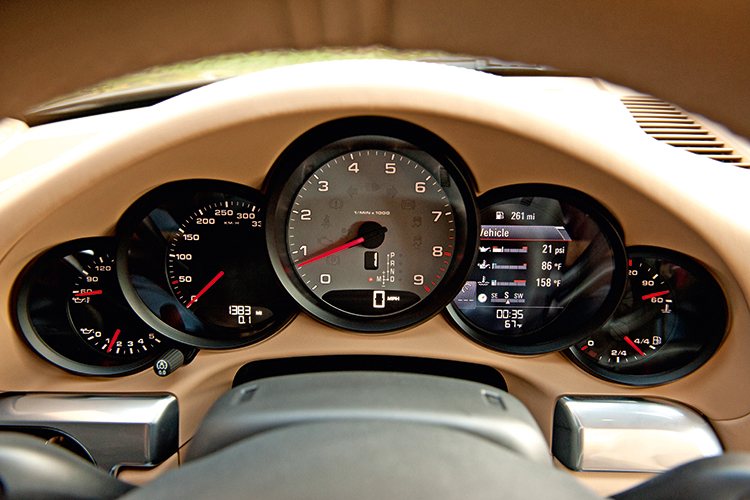 With the larger 3.8-litre flat-6 in the 400bhp 911 Carrera S, the century sprint timing is whittled down to 4.3 seconds by the extra 50bhp and 50Nm – it becomes 4.1 seconds with the Sport Chrono Package, which offers launch control.

These 3.4-litre and 3.8-litre engines are not exactly new, being based on the direct injection units of the earlier range in the 997. Much of the performance improvement is due to the 7-speed PDK dual-clutch transmission. Not only does it do perfectly controlled launches, it also shifts rapidly between gears. 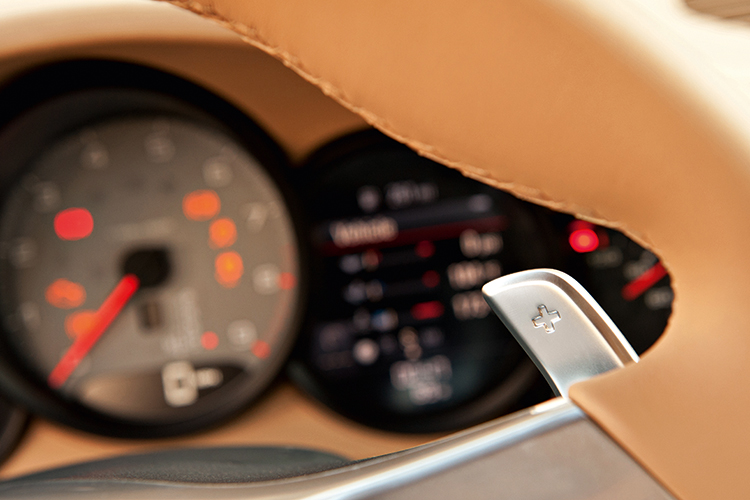 Far superior to the Tiptronic gearbox of the 996, this new-gen PDK by itself may be responsible for at least half of the superior dynamics, at the same time enhancing the 911’s fuel efficiency. One of the PDK’s petrol-saving tricks is to disengage drive – and coast – when going downhill or coming to a gentle stop.

The 7-speed manual transmission is a major innovation, too. Despite dwindling sales of three-pedal sports cars, Porsche has given diehard 911 drivers what they desire. This DIY gearbox is not an adaptation of the PDK, but a revision of the robust 6-speed manual from the previous 911. The top gear is an overdrive ratio, with the first six gears stacked optimally for acceleration. 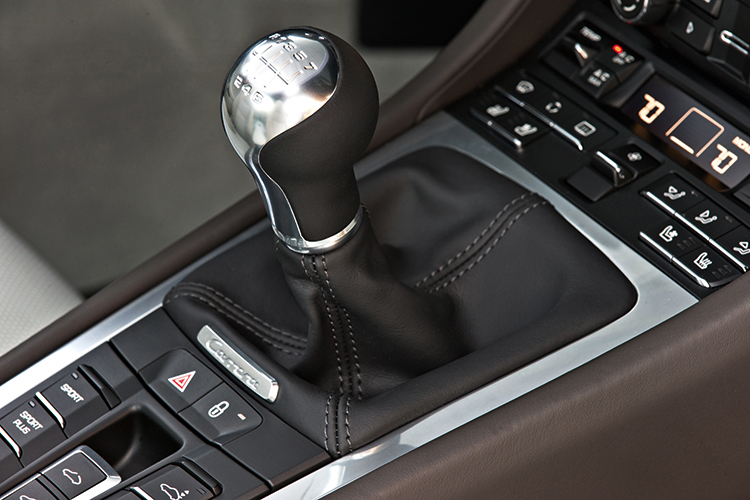 Groundbreaking 7-speed manual gearbox has a built-in lock-out that allows seventh gear to be selected only via sixth or fifth.

Over the years, Porsche has been adding electronic driver aids to the 911. The intention back in the 1980s was to provide easier and safer access to the 911’s on-road potential, but these days, most of the “digital” devices help the driver outdrive himself with the 911, so to speak.

One of the high-tech helpers is PTV (Porsche Torque Vectoring), adopted from the outgoing 911 Turbo and available in two flavours – basic and advanced. The latter is called PTV Plus, which employs an electronically controlled rear differential that can divert torque 100 percent to either wheel and, in corners, will apply more torque to the outer wheel to gain more traction.

This also creates a favourable yaw rate to keep the car neutral at the limit, enabling the 911 to generate as much as 1.32g in a bend. Incidentally, the braking force is good for 1.31g and full-bore acceleration, 0.98g. As for the basic PTV, it is a software-based system that brakes the inside rear wheel to attain a similar effect. 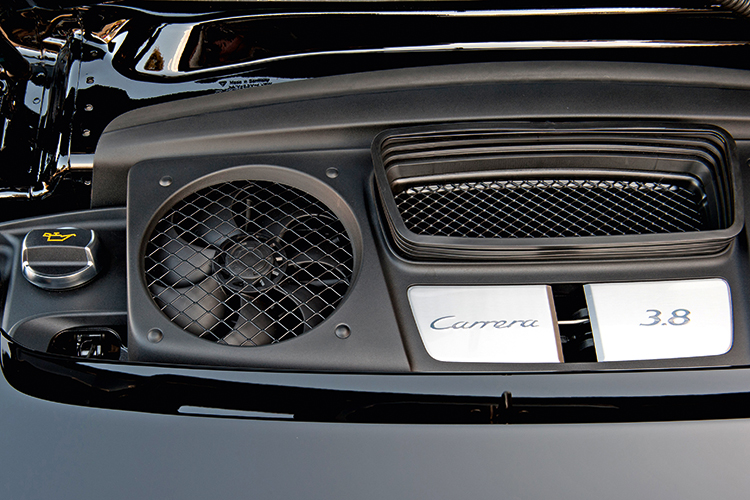 It had to happen eventually – Porsche has finally introduced EPS, or electric power steering, to the 911. The engineers, who must know all the bad press that EPS systems tend to receive, have gone to great lengths to get it right. And it really feels right, so much so that the average petrolhead probably wouldn’t know it’s an electro-mechanical steering.

Another new gadget for the 911 is PDCC (Porsche Dynamic Chassis Control). This active roll stabilisation system is also employed in the Cayenne SUV, but in a different form. The anti-roll bars are hydraulically linked to the suspension struts and they operate actively, with pressure coming from an engine-driven pump. They are able to “flex” an extra 70mm to “flatten” the chassis during hard cornering, and they actually decouple for a  more pliant ride when there is little or no cornering force.

More surprising is the fact that the new 3800cc 991 Carrera S (PDK with Sport Chrono) matches the old 3797cc 997 GT3 (6-speed manual) in the 0-100km/h run, which takes 4.1 seconds. Not only that, the development team has been hard at work on the newcomer’s Nordschleife lap times – at 7 minutes and 40 seconds, it again matches the GT3. And the 991 does all this while offering far more luxury and convenience. 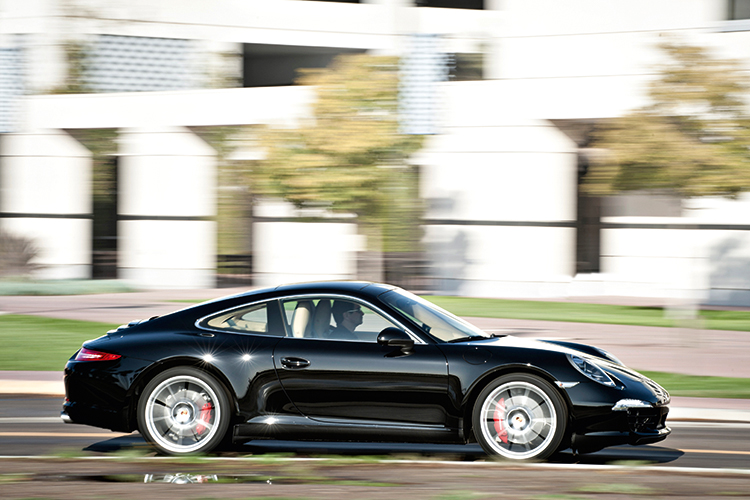 This driving machine boasts more of the same 911 magic.

Comfort is indeed a key part of the new 911’s character. It might even be too cultured, with the boxer engine unusually quiet as we drove the car out of the Santa Barbara hotel for its road test.

The cockpit is completely new and reminds me of the Panamera, although Porsche has stressed that this cabin is actually inspired by the Carrera GT. Problem is, how many of us have actually seen the rare V10 supercar?

Anyway, there is a console button with a twin-tailpipe icon, which brings the engine “closer” to the interior without raising the drive-past noise level. Indeed, it lets more of the flat-6 exhaust and intake sounds be heard inside the car, but the wonderful whirring exclusive to the 911 seems to be otherwise restrained. The jury might still be out on this one, but we could do with a little more of that “whang-whang” music from Porsche’s air-cooled boxer era. 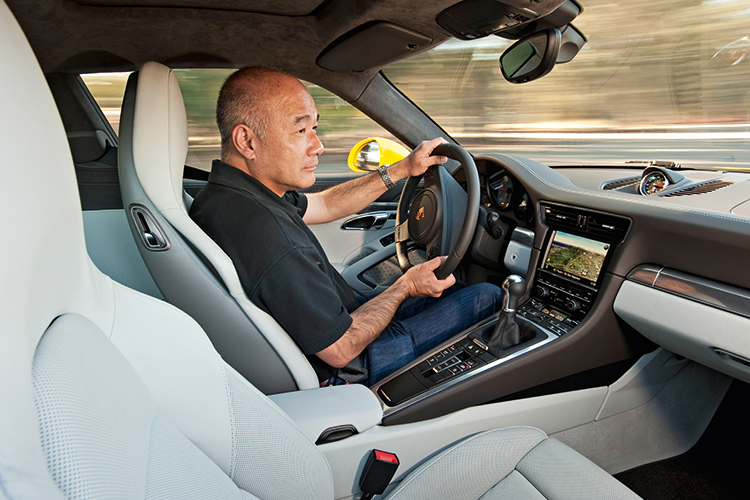 It slowly becomes clear that noise and harshness are well suppressed at the source, namely the tyre-tarmac contact patches and the suspension hard-points. Even the rush of air over the windscreen, windows and mirrors at speed has been reduced.

The superb insulation has been achieved without resorting to specific soundproofing measures, such as double glazing and bulkhead blankets. Drive over loose gravel, however, and the stones seem to be drumming directly under the occupants’ seats, but other than that, the refinement is first-rate for a 911. 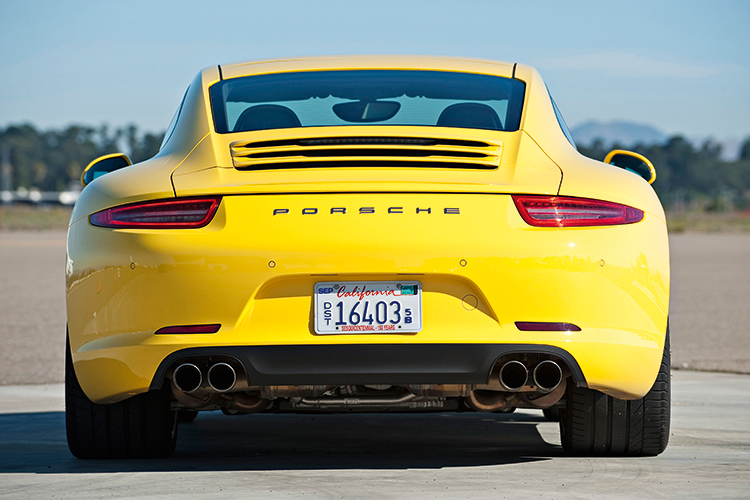 Over Californian roads, which are either a lot better than Singapore’s or a lot worse, it is hard to tell if the new Porsche is more comfortable than its forebear, which is already one of the smoothest sports cars around. I would need an evaluation on home turf to know for sure.

I was initially worried about the EPS compromising the drive, but it never drew my attention to its presence. The steering remains as sharp and positive as ever – maybe even sharper than I remember. The assistance is not speed-related, so there is consistent feel and weight in the wheel throughout the journey. There is feedback, too, which suggests that the servo motor doesn’t spoil the conversation between steering and steerer. 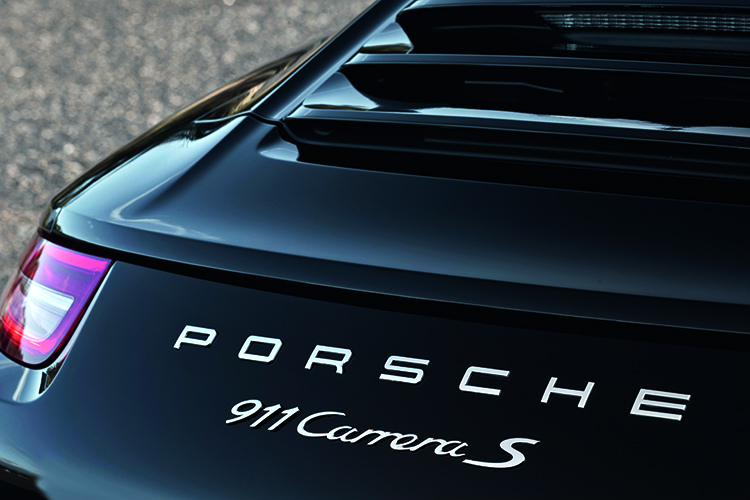 There is no argument when it comes to the 911’s almost total lack of body roll. The PDCC works well, cranking up the chassis’ roll resistance as the g-forces increase during cornering. Some credit for the handling must go to the Pirelli P Zero tyres, which provide amazing grip (as indicated by the on-board g-force display) and help produce an effortless 1.3g – a figure that, not long ago, was only possible with racecar slicks. The P Zeros are also remarkably “cushiony” considering their leech-like hold.

Porsche is confident about the newest 991 series of the all-important 911. Dynamically, it has progressed, yet visually, it has stayed steadfast, being subtly different but familiar enough. The 911 driving experience has been sanitised somewhat, but its newfound efficiency is unbeatable by sports car standards.

The Porsche icon is now bang up-to-date, without dating the older 911s too much and hurting their residuals. The new 911 comes to Singapore this month (January). 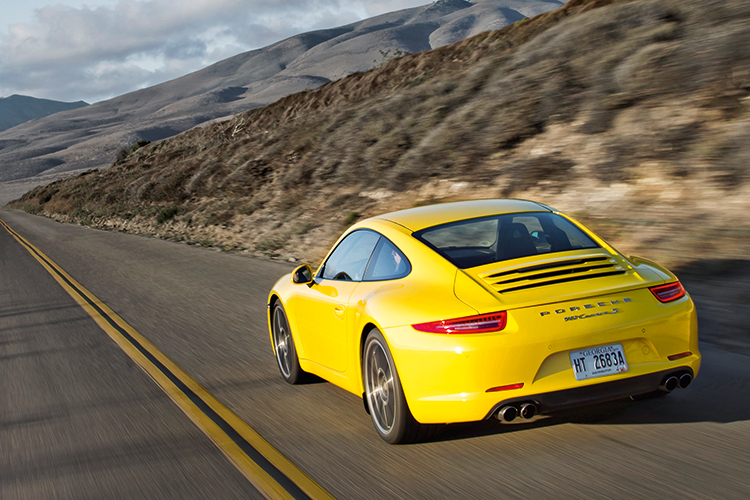 The evergreen Porsche 911 has been reinvented again.