Porsche says its soon-to-be-launched Taycan electric saloon will drive like a Porsche.

It is a lofty promise, especially since the way a Porsche drives has evolved over time.

An air-cooled 911 with the first-generation Tiptronic gearbox does not drive like a modern 911, for one thing.

And a Cayenne certainly does not drive like a Boxster.

But we get the drift.

All Porsches have an inimitable blend of performance and precision, attributable largely to painstaking tuning of engine, exhaust, chassis and multi-cog transmission.

It gets a bit more challenging though, if a car does not have three of the four main components which determine how it feels at the wheel.

How will such a Porsche drive?

For a hint, look to the Stuttgart marque’s line-up of plug-in petrol-electric hybrids, such as the Panamera 4 E-Hybrid Sport Turismo tested here.

Like all hybrids, this mouthful of a Porsche has electric drive as well as conventional drive.

“Plug-in” describes its lithium battery’s ability to store recuperated power on the go, as well as to be juiced up via a Porsche wall charger or the public charging points available here.

Charged up, the large wagon – in excess of 5m and weighing more than 2.2 tonnes – can move on pure electric mode for about 25km.

It is in this mode which gives us a peek at Porsche’s full-electric range, starting with the Taycan.

Unlike most hybrids, plug-in or not, the Panamera 4 E-Hybrid Sport Turismo is adequately sporty even in electric mode.

And it has a long coasting distance when your foot is off the throttle.

Its electric motor packs 100kW of power and 400Nm of torque – respectable numbers which allow the massive wagon to keep up with city traffic quite effortlessly.

And rather silently, too – if not for the air-conditioner which sometimes appears louder than it should. Perhaps this is because there is no engine noise to mask it, although none of the other electrified cars have this sound, which seems to emanate from the compressor and not the blowers.

When its twin-turbocharged 2.9-litre V6 kicks in, it is with a throaty note and veritable verve.

Combined with the electric motor, the Panamera 4 E-Hybrid Sport Turismo has 462hp and 700Nm of torque at its disposal, making it quicker and faster than its non-hybrid twin.

Driven with conviction, the car’s heft is all but gone.

In its place is a level of agility and breeziness often associated with its smaller, lighter stablemates.

Rear-wheel steer (a cost option) helps in this respect.

The car responds to steering inputs with a dexterity uncommon among cars of its length and wheelbase (2,950mm).

All-wheel-drive allows it to corner neutrally, while its adaptive air suspension system keeps things on even keel under most situations – even if left in the softest damping mode.

The cabin is well-insulated against movements and noises associated with bad patches of tarmac.

On the go, it is a joy to both driver and passengers – a quality many carmakers find elusive because it is hard to find a sweet spot between diametrically opposing values .

The test unit is configured as a four-seater, so rear occupants enjoy plenty of hip room and a decent amount of legroom.

Behind them is 425 litres of easy-to-access cargo space.

The only things that are a tad jarring are a tyre pressure monitor with persistently false readings and a navigation system with rather rudimentary graphics, amplified by an enormous monitor.

And, of course, like all Porsches, the Panamera 4 E-Hybrid Sport Turismo comes with many cost options.

It will be interesting to see how the Taycan, which has fewer crucial moving parts, will be priced. 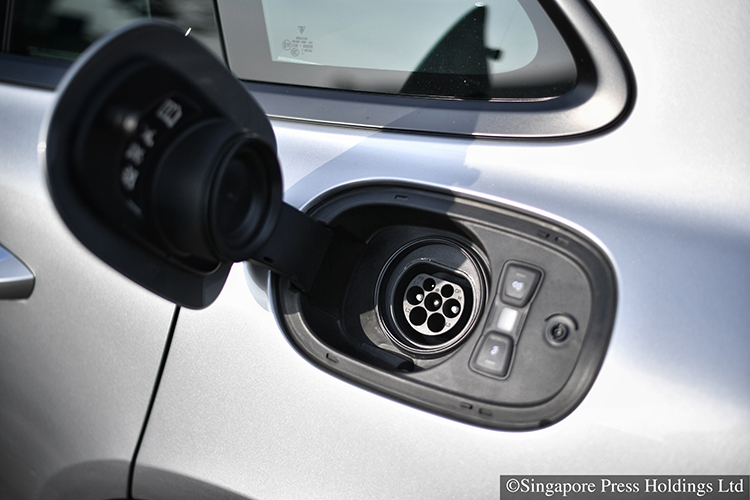 The Porsche Panamera 4 E-Hybrid Sport Turismo can run on pure electric mode for about 25km when it is fully charged.