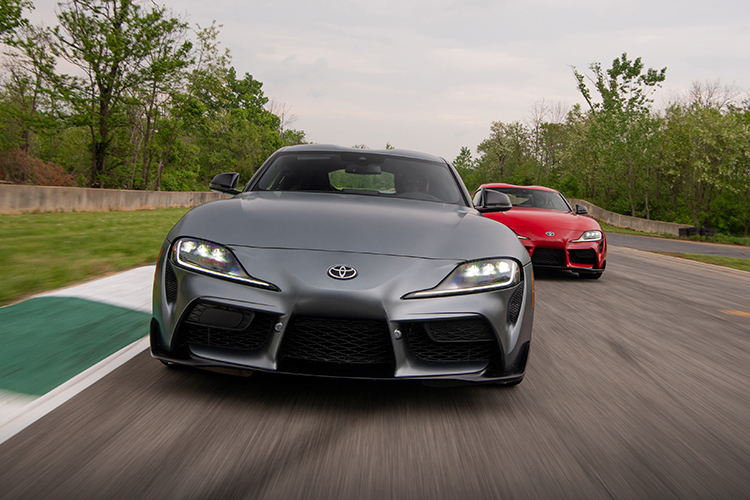 Two chefs following the same recipe may not result in dishes which are identical. The same goes for cars sharing the same platform and drivetrain.

Examples abound in the Volkswagen family, where component-sharing across brands and models is more widespread than in any other group. Yet, each car in the sprawling empire is able to have its own identity. Well, most of the time anyway.

But the new Toyota Supra takes the “same recipe, different dishes” example to another level.

The Toyota Supra shares the same chassis, engine and gearbox as the BMW Z4. Its cockpit is also very similar to the BMW roadster’s.

Yet, when you drive the Supra, you sense it is a slightly more driver-focussed machine than the Z4, with a performance that pushes the envelope a little further. On paper, the difference boils down to a 0.2-second gap between two century sprints – with the Supra having the quicker 4.3-second dash. 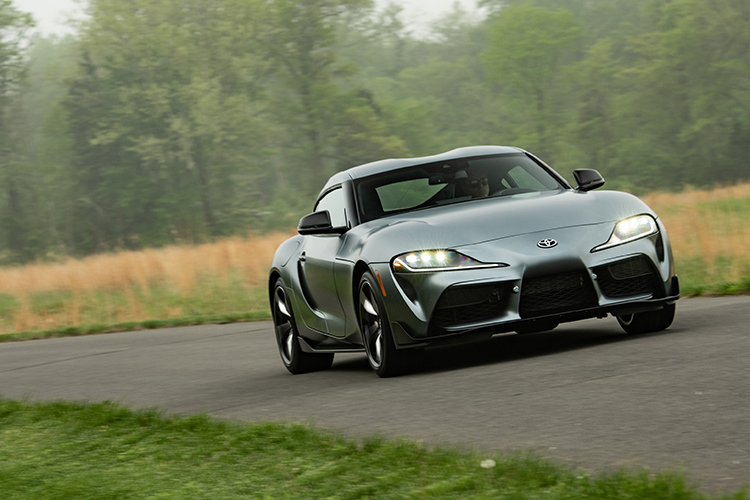 This edge has been well documented by drag race videos showing the Toyota Supra having quite a lead over the Z4 in a straight line.

But as Toyota Supra chief engineer Tetsuya Tada says, numbers are not everything. How the car makes you feel behind the wheel matters more.

Yet, Mr Tada relies on numbers to explain the Supra’s superiority. He says for a car to handle well, the ratio of wheelbase to front track has to be below 1.6.

The Toyota Supra’s ratio comes up to 1.55, equal or better than some of the more rarefied sportscars in the arena. But what about the Z4? Interestingly, the Z4 has a ratio of 1.54, which should technically make it more agile. 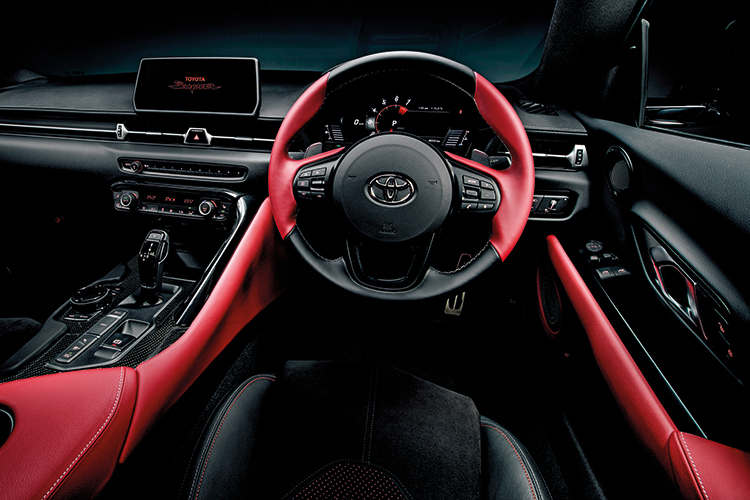 Herein lies two other numbers which Tada-san has not highlighted. One, the Supra has a lower centre of gravity (it is 1290mm tall, versus the Z4’s 1304mm). Two, it weighs less – 1495kg for the 3-litre reviewed here versus 1610kg for the equivalent M40i.

This explains its better power-to-weight ratio, and consequently, the Toyota Supra’s quicker take-off. It also means the two cars sharing the jointly-developed platform behaves and feels differently at the wheel.

In the Sportsland Sugo race circuit near here, Toyota’s first Supra in 17 years shows itself to be both competent and enthralling.

Getting in the Supra gives you the first hint of how low it sits. While the cockpit is largely similar to the Z4’s, the sensation of having to stoop a little lower, and having the seat of your pants a tad closer to the tarmac makes for a sportier impression even before the engine fires up. 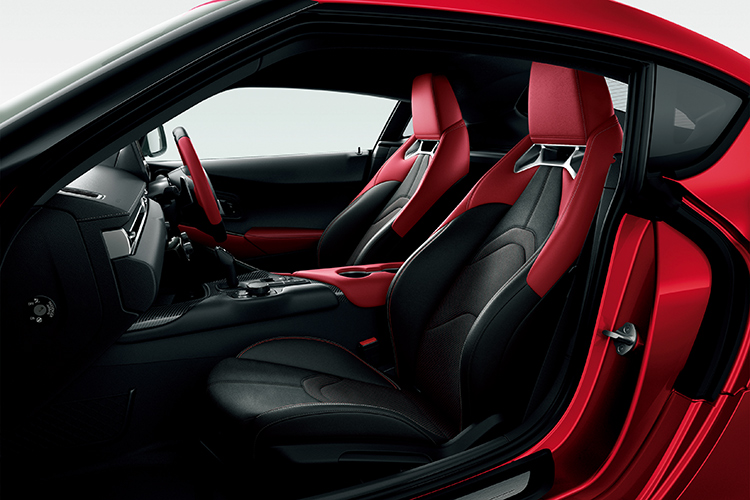 And when you do fire it up, the turbocharged 3-litre inline-6 wakes with a discernible rumble despite its hard fixed roof. Engage its delectable BMW-designed joystick shift lever to D, and the stage is set for the sound to translate to fury.

And the car obliges readily. Perhaps a little too readily. It is almost impossible to move off gently. With the slightest throttle pressure, the wildly-styled Toyota two-seater lunges forward like an untamed beast.

You leave the pit above regulation speed, and immediately feel how nimble and supremely confident the car is. Round the first bend, and its extraordinary grip becomes obvious.

There is a wonderful lightness to its handling, which reinforces its impression of agility. By the third turn, you are well acquainted with its lethal acceleration as it pulls out of bends and onto a blazing straight. 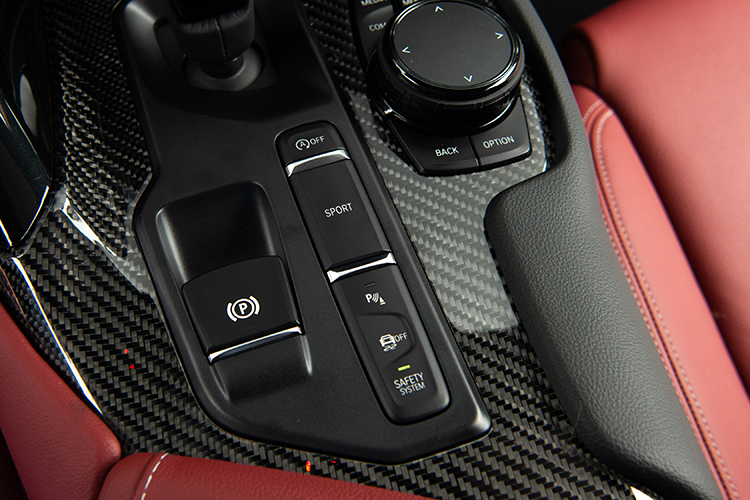 On the longer of two straights, it breaches 200km/h with two car lengths to spare before the recommended braking point. Its four-piston Brembos rein the ballistic rear-driven car in with a mix of thrill and trepidation.

As it goes from 210km/h to 80km/h, you find yourself steadying the car with several minor steering corrections.

Yes, the Supra’s short wheelbase (shorter than even the Toyota 86’s) makes it a fun and fancy dancing partner when you do the twirls, but it also makes it a tad jittery at high velocities. Still, at no time does the car feel unsafe. When I brake a little late in one of four laps, the anti-lock braking system kicks in gently for just a split second.

As the car decelerates and downshifts, its exhaust makes the sound of corn popping in a hundred ovens – a delicious rendition. 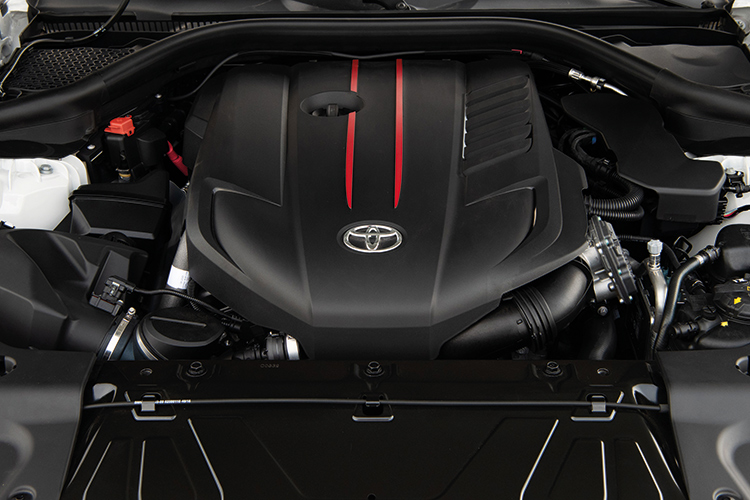 Turbocharged 3-litre inline-6 pumps out 340hp and 500Nm, and has a delicious soundtrack, too.

But it is around fast corners that the car excels. More than its “golden ratio”, its low centre of gravity or its relative lightness, the car’s extraordinary rigidity manifests itself subtly.

You get taut and tight turn-in’s – which are sometimes more satisfying than brutal acceleration.

Truly, the Supra’s track prowess is nothing short of phenomenal. For one, the last two cars with which I managed to cross 200km/h in a circuit was the Lamborghini Urus and the Honda NSX.

Note, however, that both far outgun the Toyota Supra in sheer engine power. Also, the straights they were on were noticeably longer. The longer straight at Sugo is just a tad over 700m, while the Estoril track in Portugal – where the NSX was driven – has a straight close to 990m. 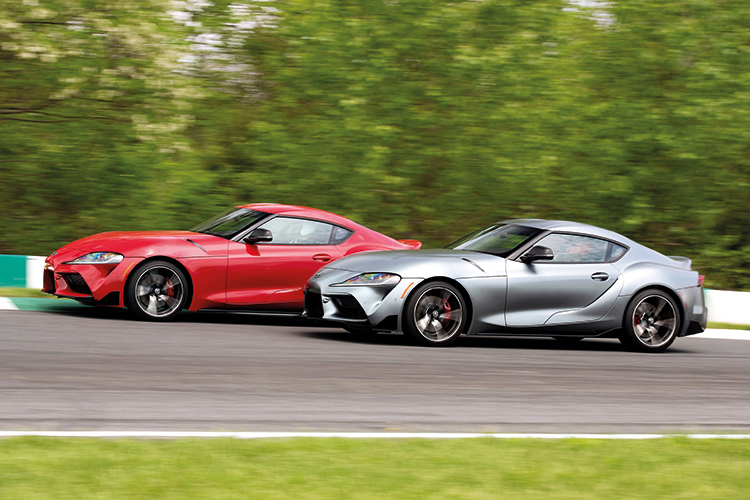 The Urus accomplished its double-century feat in Vallenlunga, with a straight well over 1km.

Compared with the Z4, the Toyota Supra feels like a completely different car. Sure, there are plenty of visual and tactile reminders of BMW within the cabin, but it stops there.

The Toyota feels angrier and noticeably more urgent, even if the BMW has a more stirring soundtrack (especially when its canvas roof is folded down).

While I have driven the Z4 only in Singapore, driving the Toyota Supra on B roads here gives a hint of how the Japanese car will perform outside a race circuit.

The Toyota Supra will go to seventh gear at as low a speed as 50km/h. But at a moment’s notice, drops two or three gears to pick up speed when it senses throttle urgency. Going down a long snaking incline, the transmission reacts quickly to pick a suitably low gear. Other automatics will do likewise – eventually.

There is a watered-down 2-litre inline-4 version that is still more than adequate for Singapore roads. But for the enthusiast, the 3-litre Toyota Supra is the one to get.

It is the one that lives up to the hallowed Supra name.

The only quibble you might have is with its busy, boy-racer design. The Toyota Supra has more slits, vents and folds than an origami frog. It would not be so bad if those vents served a purpose, but they are all purely cosmetic.

Toyota says they are meant for those who want to modify their car, and there are ready parts to replace the fake vents with real ones. Well, if that were true, some heavy structural mods (to the doors, for instance) may be necessary. 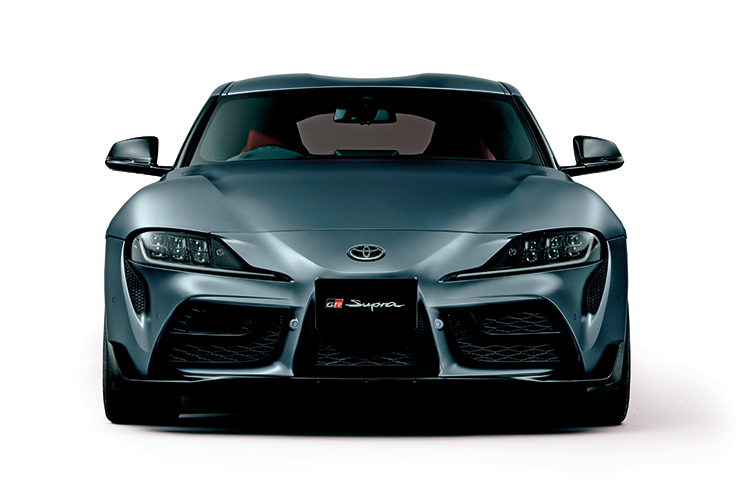 There are other less invasive ways to mod the car, including installing a cross member in the engine compartment to enhance rigidity further (the anchor points are in place), and fitting a slew of aero kits from Toyota Racing Development.

Some of these are really nice-looking, especially those in carbon fibre.

Still, the Z4 is undeniably the more elegant sibling. Yet, there will be those who prefer the Toyota Supra’s louder styling.

And really, why not? The car has after all, proven itself to be a worthy heir to the revered Supra lineage, even if it has more than a pint of German blood in its pedigree, and even if it is birthed at Magna Steyr’s plant in Austria.

Because as the Suga track outing has shown, the Toyota Supra has lots of substance to go with its complicated form. In an era of increasingly bland and homogenous cars, that is to be celebrated. 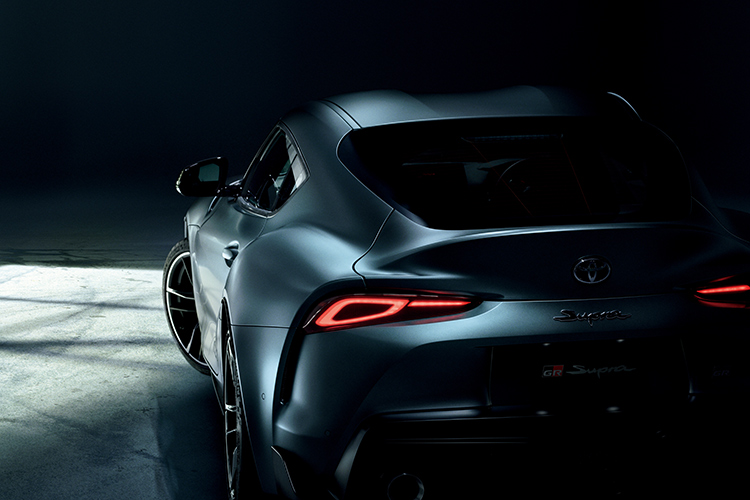