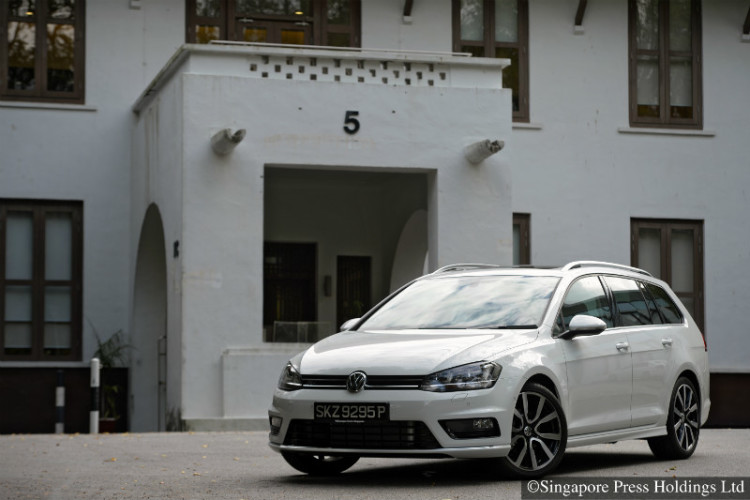 If the new Volkswagen Golf Variant were a league footballer, it would be Peter Crouch. Despite standing at a lanky 2.01m tall, Crouch is a striker, a position requiring speed, dexterity and, usually, a lower centre of gravity.

Like Crouch, the latest Variant acquits itself pretty well on the field. The most impressive aspect of the new car is its driving dynamics.

Despite being 307mm longer than the Golf hatchback, it feels nearly as nimble and agile. At the wheel, you enjoy a level of driveability and connection to the tarmac similar to those in the standard-bearing Golf.

Equipped with Volkswagen Group’s ubiquitous 1.4-litre 125bhp/200Nm TSI engine, it has more than adequate go to keep you entertained.

It sprints from zero to hundred in 9.5 seconds, which is merely 0.2 second more than what the regular Golf 1.4 clocks. Top speed is 205km/h, versus the Golf’s 203km/h, thanks largely to the aerodynamics of a longer tail.

In day-to-day driving, the Variant does not come across as inferior to the hatch – neither in performance nor handling.

Compared to the recently introduced VW Sportsvan, it is clearly more grounded and engaging. At the helm, you often forget you are driving a wagon.

But make no mistake, the car is a wagon. And a pretty good one, too. Although the specs sheet tells you that it is not substantially more spacious than the Sportsvan, it is.

It has 605 litres of stowage with all the seats up and 1620 with the second row folded down. The Sportsvan has 500 and 1520 litres, respectively.

But once you flip open the tailgate, you discover that the Variant has a bigger floor area in the cargo compartment. This makes loading and unloading flat-packed furniture and planter boxes a lot easier.

Even though the car is not as tall as the Sportsvan, its loading height is not to be sniffed at (as you can see in the photo). The height of the cargo floor can be adjusted (or it can be removed entirely).

And if you have extra-long items to carry, the front passenger seat can be folded almost completely.

The 60:40 split rear seats can be folded by flipping convenient levers on the side wall of the boot. You will find four bag hooks to secure smaller items with.

As far as cockpit amenities go, the Variant is as well equipped as the rest of the cars in the Golf family. You get a gamut of premium features such as a multi-function steering wheel with finger-tip access to the infotainment system and cruise control/speed limiter, dual-zone climate control and Park Assist.

The infotainment set boasts an eight-inch monitor and connectivity via Apple CarPlay, Android Auto and MirrorLink.

Last but not least, the Variant is a lot of car for its price. Despite having R-Line trim, the test-car is just slightly more expensive than the Highline variant Sportsvan. And it is substantially more competitive than something like the Volvo V40.

Think of it as getting an EPL player for an S-League budget.