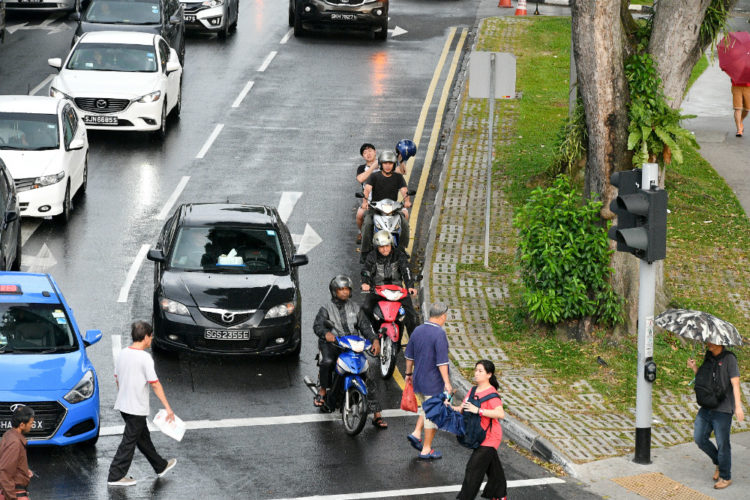 A pillion rider removing his helmet before the motorcycle came to a complete halt along Admiralty Road towards Woodlands Town Centre, during the late afternoon peak hour, on 10 January 2017.

At high speed, the Malaysian motorcyclists zoom past traffic, weaving across lanes, squeezing between vehicles, even speeding on road shoulders.

Some of these reckless riders may have had to pay the price for their actions, judging by data which Khoo Teck Puat Hospital shared with The Sunday Times.

There were 865 seriously injured motorcyclists seen by the hospital between 2011 and 2015, said consultant surgeon Caroline Simon.

Slightly more than half of them, or 53.6 percent, were Singaporeans. Work permit holders made up the next biggest group, at 35.3 percent, while 7.7 percent were permanent residents. Others made up the remaining 3.4 percent.

Government figures show that as of November, there were 142,492 registered motorcycles and scooters here. Some of them could be owned by Malaysians.

An estimated 40,000 Malaysian motorcyclists commute to Singapore daily. Roughly half or 53.8 per cent of accidents involving Malaysian riders happened after office hours – between 6pm and 8am – Dr Simon said. This is the time when most of them head home to Malaysia or come to work here.

National University Hospital (NUH) said the biker-related accidents it treats – there were 417 incidents involving moderately to severely injured motorcyclists and pillion riders from January 2014 to October last year – include some Malaysian riders.

Malaysian riders have come into the spotlight because of the handful of reported deaths from October to December last year. On Dec 1, it was reported that Malaysian Ng Boon Kong, 51, was killed in a collision with a tipper truck in Woodlands.

While deaths involving Malaysian riders are understood to be not a “significant” percentage of fatalities here, the injury figures acquired by ST are telling.

This is especially so when, on average, figures show that in 2015, 4875 motorcyclists and their pillion riders were injured, a 5 percent rise from 2014.

One biker, who gave his name only as Mr Koh, is among the Malaysian motorcyclists who commute to Singapore every day. Mr Koh, who lives in Taman Johor Jaya in Johor Baru, said he wakes up at around 4.30am every day to get to work but would occasionally get caught in traffic at the Causeway.

The 50-year-old, who has been working in the construction industry for 20 years, said: “If we’re stuck in a Causeway jam, naturally some of us will speed up to make up for lost time.”

At a coffee shop near Woodlands Centre Road, he showed this reporter scars on his arms from three accidents he has had in Singapore. He said he generally abides by the traffic laws.

In his last accident, three years ago, Mr Koh crashed his small-capacity motorcycle on the expressway while trying to avoid a car which had switched lanes.

Speaking in Malay, he said: “When I fell, three other Malaysian bikers behind me also fell as they swerved to avoid me.”

Another Malaysian, Mr Johnnie Koh, 28, said riding a little fast does not mean it is dangerous. He added, in Malay: “I’m confident of my skills. We ride as fast as the situation permits.”

However, Mr Bernard Tay, chairman of the Singapore Road Safety Council, said earning a living each day in Singapore does not have to be a gamble. “If you anticipate a jam, start your journey early,” he said. “Malaysian riders need to understand that the terrain is different because Singapore is a city and not a small town.”

Failure to abide by road rules in faster-flowing traffic here can be dangerous to Malaysian riders, as well as other motorists, Mr Tay said.

Injuries suffered by bikers on Singapore roads include bleeding in the skull, bone fractures and multiple rib fractures.

Dr Jackson Jiang, an associate consultant at the department of hand surgery, Singapore General Hospital, said: “Motorcyclists get injured in traffic accidents due to collisions with the road surface, road barriers or other vehicles.”

Dr Victor Ong, senior consultant at NUH’s emergency medicine department, stressed that some of the external injuries and abrasions could be reduced if bikers were to wear “riding gear like jackets and appropriate footwear like riding boots”.

But changing a person’s riding style may be difficult, said Mr Ong Kim Hua, president of the Singapore Motorcycle Safety and Sports Club.

Mr Ong, 50, said: “These are not young Malaysian riders. The need to be first in line, the first to reach the checkpoints, the first to get home is a culture that needs to be replaced with safety in mind. But bad riding habits become entrenched if you do not address them early.”

As foreign motorists enter Singapore at the checkpoints, there are road safety messages to advise them on safer motoring.

Mr Tay said motorists learn quickly when they are given a summons.