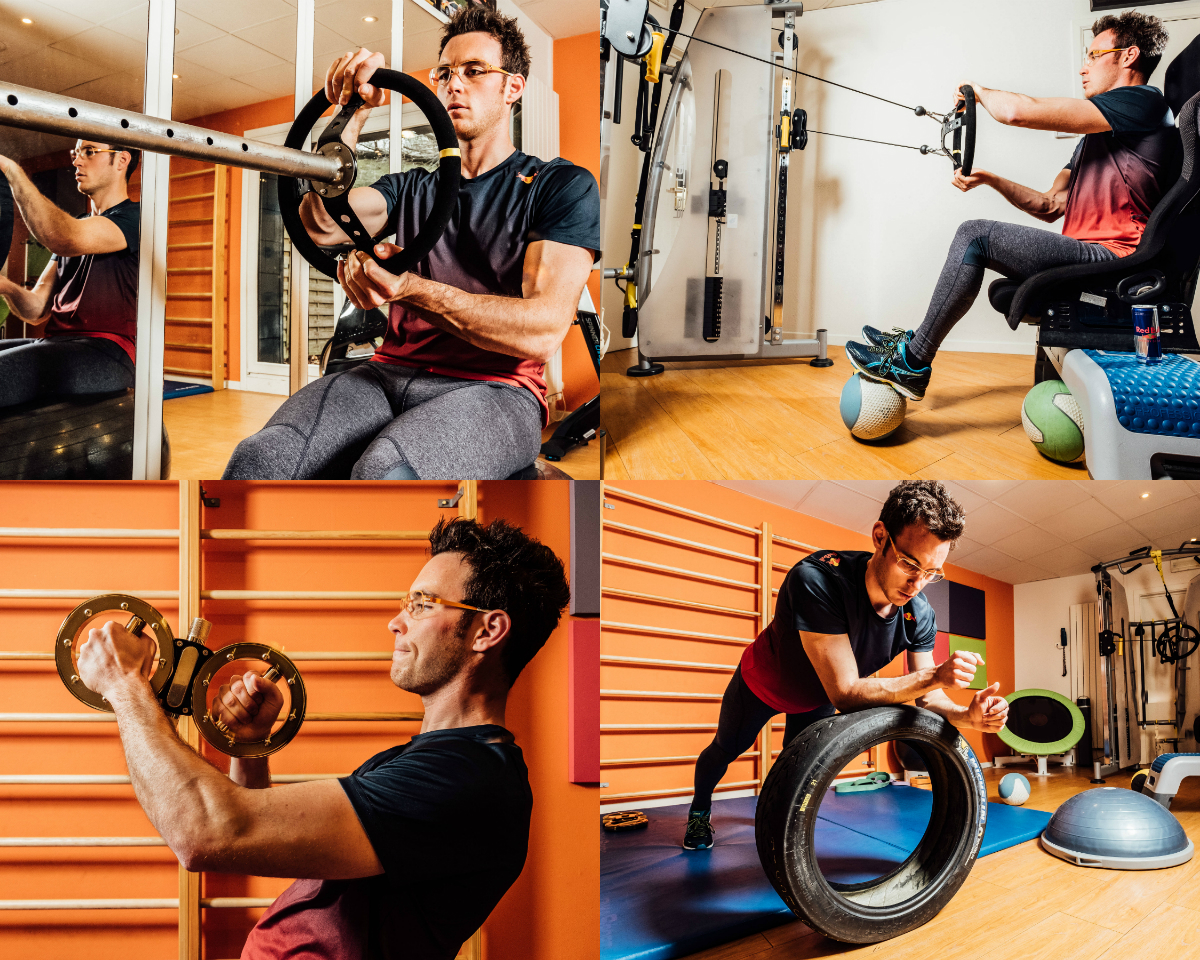 Thierry Neuville has been competing in the FIA World Rally Championship (WRC) since 2009 and has achieved three second-place title finishes, so he knows a thing or two about how to prepare himself for the global WRC calendar across ever changing conditions and perilous surfaces. The Belgian lies 10 points behind 2018 leader Sébastien Ogier after five rounds, with the title contenders set to tackle Rally de Portugal next (2018 May 19-20 weekend).

• Endurance Jump – on and off a tyre, while stretching your arms using elastic strap resistance. Two sets of 20 reps. Trains endurance, arm-and-leg coordination and precision as Neuville can’t look down at the pedals while he’s driving.

• Resistance Controlled – movement of a weighted steering wheel, while sitting in a racing seat. Four times 20 reps. Neuville strengthens his back muscles through the resistance of the cable weights. He also trains grip and strength in his arms during steering movements.

• Core Planking – on a car tyre and controlled rolling from left to right. Four times 20 reps. Training abs is always a good idea, as it gives balance and builds strength through the whole body. While driving, much of the force Neuville puts out goes through his shoulders.

• Responsiveness Catch – tennis balls while holding a weight and looking straight ahead. Four times 30 seconds. Neuville does this workout while balancing on an exercise ball for an extra challenge. This is how Neuville trains the speed of his reactions and practises picking up details in his peripheral vision while training his shoulder muscles too

• Speed Rotate – a special device, the power loop, while balancing on a car tyre. At home, you can use two small weights. Two times 90 seconds. Neuville trains the speed of his arms and balance with this special device. Resistance can also be built in.

• Vision – Neuville uses a trainer with lights he must tap when they come on. It can be set to flash at different speeds and colours. If you want to try at home, stick numbered post-it notes to a wall and have someone call the numbers. Three times 50 correct touches. This trains responsiveness and peripheral vision as Neuville keeps looking straight ahead while training his hand-eye coordination, which is very important when racing.

• Balance – While balancing on an exercise ball, bend and stretch your left leg, hold a weight at steering height and turn it like a steering wheel. Two large elastics give resistance. Four times 30 seconds. By stretching his left leg, Neuville trains his crucial braking leg.

The 29-year-old revealed: “Rally driving takes a lot out of your body. That’s why it’s really important to be in top shape. If I am haring down a dirt track at 140kph, cutting the bends perfectly and making jumps that are dozens of metres long, I must keep control at all times. Focus, alertness and responsiveness are extremely important. I need lightning-fast reactions, because every 10th of a second can make the difference!”

Find out how this motoring writer got up to speed for his first drive of an F1 car.

Read about the fast-driver training at Porsche Sport Driving School in Australia.