What is a 48-volt supercharger? Do cars with turbos need it? | Torque
Loading posts...
0 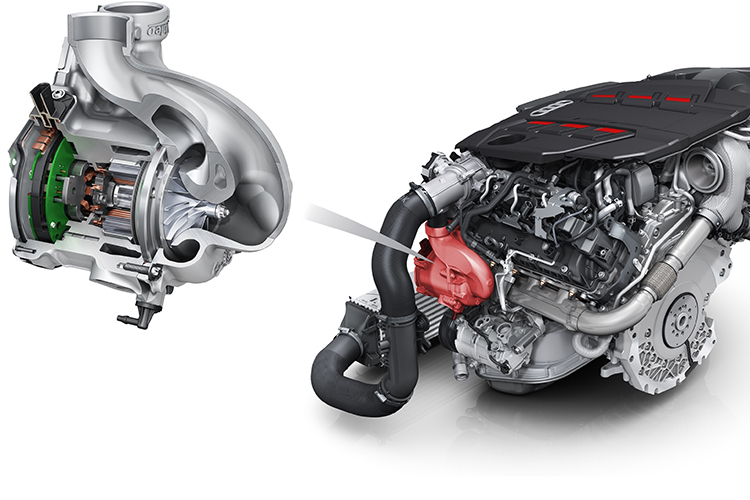 48-volt supercharger as seen in the technical illustration of the Audi S6 TDI’s engine.

Some manufacturers have begun equipping their cars with 48-volt superchargers.

What are 48-volt superchargers? Are they powered by the engine as well?

We also answer why turbocharged cars may still be equipped with such superchargers?

BEFORE ANYTHING ELSE, WHAT IS A SUPERCHARGER?

A supercharger boosts engine output by pushing more air into an engine.

Traditional superchargers are belt-driven. They are connected to the engine, so as long as it is running, the supercharger can spool and provide boost.

Turbochargers, on the other hand, are driven by a portion of the engine’s exhaust gases. More on their differences here and here.

WHAT’S A 48-VOLT SUPERCHARGER THEN?

Unlike its belt-driven sibling, a 48-volt supercharger is an electrically powered compressor that pressurises intake air to provide additional boost.

Being electrically powered, the supercharger responds immediately, requiring just half a second to spin to maximum speed, as in the case of the new engine in the Range Rover HST.

As a result, the engine receives boosted intake air at low speeds (just past idling).

At these speeds, a turbocharger is merely gaining momentum and far from maximum output. So the supercharger’s boost effectively fills a gap.

But the 48-volt power source is sustainable only for a short period. After which, the exhaust gas-driven turbo – having reached optimal speed – takes over.

Electrically powered superchargers are fairly new, having been made possible by lithium-ion batteries and 48-volt alternators.

ARE THEY BETTER THAN TRADITIONAL SUPERCHARGERS?

In a sense, yes. As mentioned, traditional turbochargers are attached to the engine, often by a belt.

And since belt-driven superchargers take longer to spool, they are not as efficient as electrically powered 48-volt superchargers.