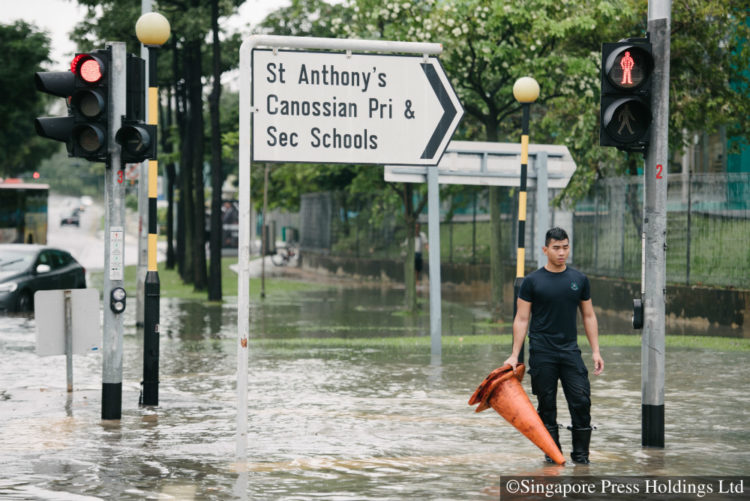 SCDF personnel crossing the affected junction. Personnel at the nearby Changi Fire Station pushed affected cars to the side of the road, say affected drivers.

A spokesman for SCDF told The Straits Times that firefighters noticed vehicles stalling in front of the fire station, in Upper Changi Road, due to a flash flood.

To help minimise traffic disruption, about 30 firefighters went out and helped to move six vehicles away from the flooded area.

They also helped to direct traffic until the traffic police and officers from national water agency PUB arrived.

Flash floods occurred in several eastern areas of the island – including Tampines, Bedok and Changi – after it rained heavily early on Monday.

Photos and videos of the floods show vehicles stranded deep in murky water, and several roads were rendered impassable.

The first flash floods in eastern Singapore occurred at 8.30am, and PUB immediately deployed officers to the areas to investigate and offer assistance.

The floods lasted between 15 minutes and an hour, and subsided by 10.30am.

PUB attributed the flash floods to unusually intense rainfall from the prevailing north-east monsoon. This was exacerbated by a Sumatra squall that developed over the Straits of Malacca and moved eastwards, affecting Singapore.