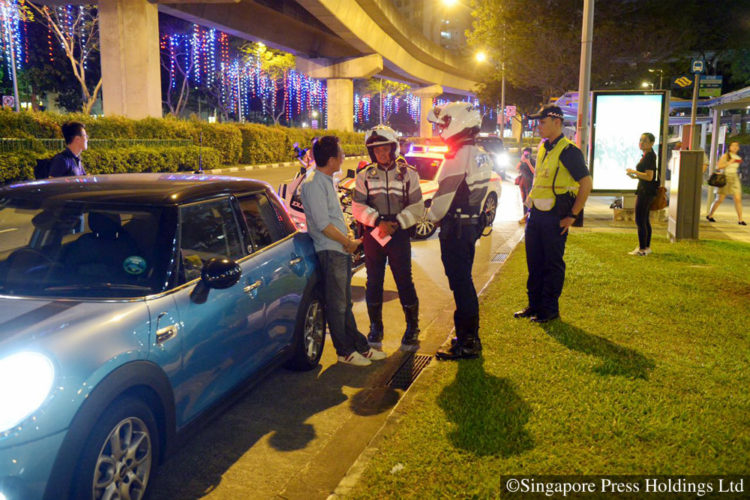 Traffic Police officers chatting with a motorist who had been driving unsteadily near Rumbia LRT station in Punggol around 8.30pm. The officers tailed the driver briefly, observing him, before pulling him over. The man was cleared after passing the breathalyser test.

Seventy-one drivers were arrested on Wednesday night (Dec 20) in an islandwide anti-drink-driving operation that started from 4pm on Wednesday and ended on Thursday morning.

More than 200 drivers were stopped and tested for alcohol consumption during the operations. The 71 drivers who were nabbed consisted of 61 men and 10 women aged between 22 and 68 who failed breathalyser tests, said the police in an update on Thursday.

For the first nine months of this year, 1535 people were arrested for drink driving. The number for January to September last year was 1546.

Through patrols and road blocks in the latest operation, conducted at more than five areas islandwide, including near public entertainment outlets and the heartland, the police had hoped to send a warning to those thinking of taking a sip before they hit the wheel, especially during the festive season.

Places where checks were conducted included clubs at St James Power Station and Dempsey Road, and heartland areas such as Punggol and Serangoon Gardens.

Superintendent Ho Yenn Dar, Traffic Police’s head of the Operations and Training Branch, said: “Through today’s operations, we want to send out the message that the traffic police conduct checks not only at roadblocks, in the city and in the wee hours, but also in the heartland and at all times of the day.

“This is because many drivers have the misconception that checks are only conducted at certain areas and at certain times.”

Such efforts appear to have paid off, as there were fewer drink-driving related accidents in the first nine months of the year.

The number of such accidents fell from 111 between January and September last year to 70 in the same period this year.

The number of deaths or injuries also declined from 165 in the first nine months of last year to 96 in the corresponding period this year.

This comes on the back of a longer-term decline in such drink-driving offences since 2014.

The media was invited to observe the anti-drink-driving enforcement operations in Punggol and Clarke Quay. One driver was stopped but was let off after he passed a breathalyser test.

Supt Ho said that in addition to road-block checks, motorists could expect to be stopped for drink-driving checks by motorcycle patrols if they were observed to be incapable of controlling their vehicles.

Drink drivers, upon conviction, will lose their driving licences and be disqualified from driving for at least 12 months.

First-time offenders can be fined between $1000 and $5000, and can have their driving licences disqualified for 12 to 48 months, depending on their Breath Evidential Analyser test results.

Repeat offenders may be punished with a maximum fine of $30,000 and a mandatory jail term of up to three years. They may also receive up to six strokes of the cane if death or serious injury has occurred.

On Dec 8, a Mercedes-Benz driver was charged with drink driving when his car mounted a divider in Tanjong Pagar Road and hit four people.

Supt Ho said: “The Traffic Police will step up enforcement action against irresponsible drink drivers who put themselves and other road users at risk… Those who persist to drink drive will face the full consequences of the law.”

Related story: Drink-driving checks may be conducted anytime and anywhere
Related story: Stop your loved ones from drinking and driving: Police