It provides support for the organisation in their local events. 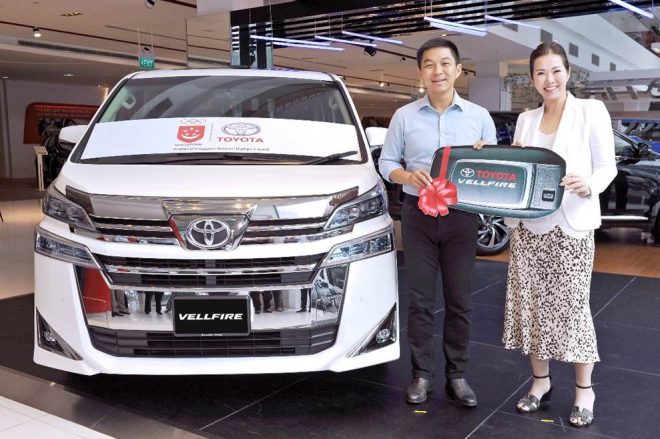 The partnership is itself part of Toyota’s global ‘Start Your Impossible’ (SYI) initiative that aims to turn the automotive giant into a mobility company.

The SYI initiative supports the creation of a “more inclusive, sustainable and mobile society”, Borneo Motors said in a press release.

In a way, the Vellfire does push some boundaries of its own too, being a luxurious transporter with space for seven.

Your passengers, seated in the captains’ seats, won’t be ruffled by any of that as the Vellfire takes a plodding 11.3 seconds to reach 100km/h and maxes out at 170km/h.

The Vellfire has seats for 7 people in captains’ chairs fitted with ottomans.

That’s partly down to the seamless continuously-variable transmission (CVT) that has seven virtual gears.

You (or whoever in the SNOC that gets to sit in it) gets to enjoy ambient lighting, versatile seating configurations and in case of an emergency, seven airbags.

“We are grateful to Toyota and Borneo Motors for their continued support towards the Singapore National Olympic Council and the Olympic Movement in Singapore. Their commitment to sport and to our athletes provides additional encouragement to the team preparing for the Tokyo 2020 Olympic Games,” said Mr Tan.

Ms Wong said the company was “humbled” to be contributing to the SYI initiative.

“There is an incredibly strong alignment between our commitments, and we hope to further inspire excellence and foster a community of resilience through sports,” she added.

This columnist was a “Crazy Poor Asian Driver”