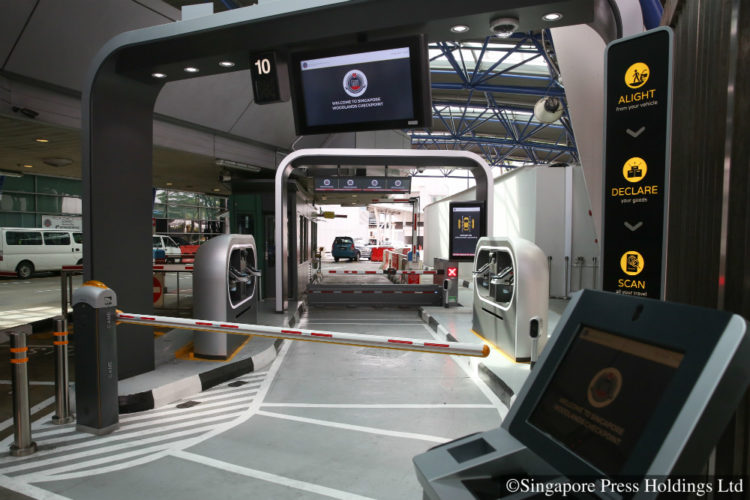 This new system provides tighter security and frees up officers to focus on more critical tasks, the Immigration and Checkpoints Authority (ICA) said on Monday (Dec 11).

For example, officers can focus their checks on travellers with higher risks, a spokesman added, noting that biometrics technology is also a more reliable way to verify identities.

The way Apics works is similar to the current clearance system at airports. Travellers scan their passports before they enter a secure zone to verify their identities using their thumbprints.

Under the new system, drivers will have to step out of their cars to manually scan the passports of everyone in the vehicle. Once they have done so and officers have completed their inspections, motorists are to drive into a clearance zone.

Here, a machine will extend robotic arms to the cars’ windows when scanners have determined their location. Each arm comprises an intercom and a wireless device with a touchscreen that is used to verify the travellers’ identities.

Travellers can pull the robotic arm closer to remove the devices from the cradle and use them in the car.

The car is deemed to be cleared when travellers complete the checks and return the devices.

Mr Cheng Wee Kiang, a senior assistant director at the Ministry of Home Affairs (MHA), who is developing Apics with ICA, said that the system is still a work in progress.

The system has been modified since the start of the trial in July, Mr Cheng added, noting that more changes are expected before Apics is rolled out. Examples include a green light that comes on when travellers successfully complete the checks. The flexibility of the robotic arms to be pulled towards drivers is also a new improvement.

The trial’s success will be judged by Apics’ ability to free up officers to be redeployed and its user-friendliness, Mr Cheng said.

But there are restrictions to biometrics technologies that cannot be resolved currently, added Mr Cheng, who reports to the Office of the Chief Science and Technology Officer at the MHA. “There will be exceptions.”

Officers will be on standby to clear travellers such as children whose fingerprints are not fully formed yet.

In the trial, one passport-scanning kiosk is attached to one automated clearance zone at each checkpoint. When Apics is rolled out, one kiosk might serve several zones, requiring fewer officers to be on standby.

Mr Cheng said that Apics will aim to clear 25 cars per hour, a specification spelt out in its tender documents in 2015. This target, however, does not factor in cases that range from contraband items to higher-risk travellers, which can lengthen inspection times.

Mr Cheng expects delays when the system is first rolled out. “As with new technologies, it takes a bit of time to get used to,” he said.

For now, the trial is scheduled to end by June 2018, but it depends on the amount of data collected.

Mr Cheng said: “It is the first time that we are developing such a system so we do not have a lot of references. We are still exploring… and trying to cover as much as possible with the trial.”

Related story: Motorists to get new alert to pay tolls
Related story: LTA steps up enforcement of vehicle tolls and fees at checkpoints 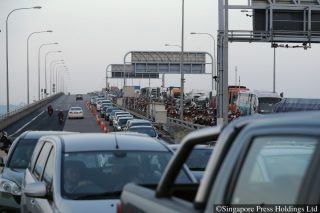 ICA will try to keep waiting times at checkpoints “reasonable”

ICA will try to keep waiting times at checkpoints “reasonable”