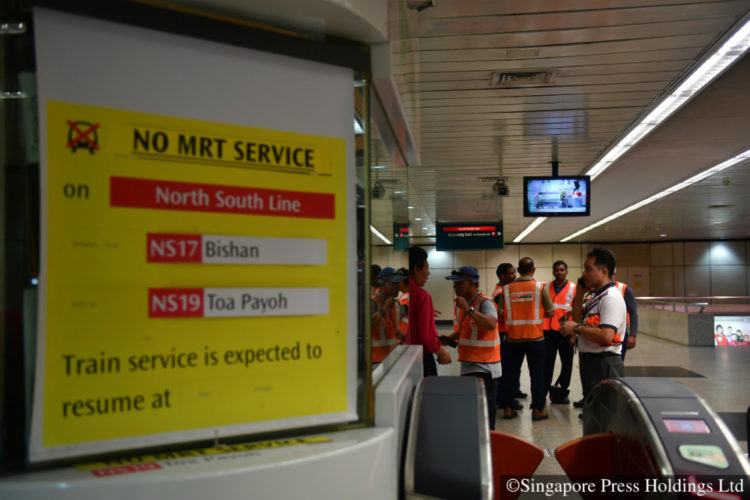 SMRT staff seen at Braddell MRT station on Oct 7, 2017. A sign was put up showing that there was no MRT service between Bishan and Toa Payoh.

Transport experts have called for more measures to be taken to prevent a repeat of a nearly 21-hour disruption of North-South Line train services over the weekend, one of the worst here since 2011.

A malfunction in a water pumping system had caused flooding in the MRT tunnels, which contributed to the disruption.

Experts said more checks and having a backup system could prevent a repeat of the incident.

Thousands of commuters on a 13-station stretch of the North-South Line, from Ang Mo Kio to Marina South Pier, had to delay their plans or make alternative travel arrangements when services were affected for more than four hours on Saturday night.

The disruption stretched further yesterday, when services between Ang Mo Kio and Newton stations remained down before they were restored at 1.50pm.

In a statement yesterday, the Land Transport Authority (LTA) said preliminary investigations showed that water had entered the tunnels between Bishan and Braddell stations through a portal opening near Bishan MRT station – where above-ground rail tracks transit underground – after a torrential downpour on Saturday afternoon.

MRT tunnels are equipped with pumps, which are supposed to kick in when water enters.

Under normal circumstances, rainwater run-off accumulated in the adjacent storm water sump pit – a hole designed to collect water – would have been siphoned off by a system of pumps, said the LTA.

But on Saturday, the water pumping system did not work, causing rainwater to overflow from the storm water sump pit into the tunnel opening and accumulate at the lowest point of the Bishan and Braddell stretch of the tunnel.

SMRT immediately deactivated the trackside power supply as a safety measure, and the pump system has since been repaired.

Detailed investigations into the cause of the disruption are ongoing, said the LTA.

The disruption on Saturday was made worse by another incident – a trackside fire between Marina Bay and Raffles Place stations that later went out by itself.

The LTA said the fire was unrelated to the earlier incident, and it is investigating its cause.

National University of Singapore professor Lee Der Horng, who specialises in transportation systems, said the weekend disruption “could have been avoided”.

He said the malfunction could be due to insufficient maintenance or testing of the water pumping system, adding: “SMRT should identify critical systems and should have redundancy in place, so if the first-line equipment fails for whatever reason, the backup system can just kick in.”

Singapore Institute of Technology assistant professor Zhou Yi suggested that SMRT consider first installing back-up pumping systems at the transit areas between the underground and overground sections of the tunnel, subject to conditions and cost limits, to prevent similar incidents from occurring.

He added that the frequency of checks on the pumping and underground drainage systems may need to be stepped up during the rainy season.

“However, it is good to see that the buses were arranged effectively… It is also good to see the joint effort from various parties, including LTA, SMRT, PUB and the Singapore Civil Defence Force (SCDF),” he said.

Train operator SMRT, in an update on Facebook at 1.52pm yesterday, said the resumption of train services followed an “all-out, overnight effort” to clear water in the tunnels between Bishan and Braddell stations.

SMRT said it worked with teams from SCDF, national water agency PUB and LTA to pump out water from the tunnels, an operation that SCDF said was completed at around 11am yesterday.

Affected trackside equipment was inspected, cleaned, replaced and tested before passenger services resumed. Checks were also conducted on other tunnel portal pump systems located throughout the North-South and East-West lines, said the LTA.

When The Straits Times visited Bishan MRT station at around 7.30am yesterday, about 30 commuters were seen queueing for the bridging bus service at the bus stop outside the station. SMRT staff were present to guide them.

One of the commuters, Mr Alvin Chong, 53, had to take a bridging bus from Bishan to Newton.

Mr Chong, who is self-employed, had already been affected by the breakdown on Saturday while out with friends – he ended up taking a bus from Beach Road to Buona Vista.

“You get more frustrated as you experience more (of the disruptions),” he said.