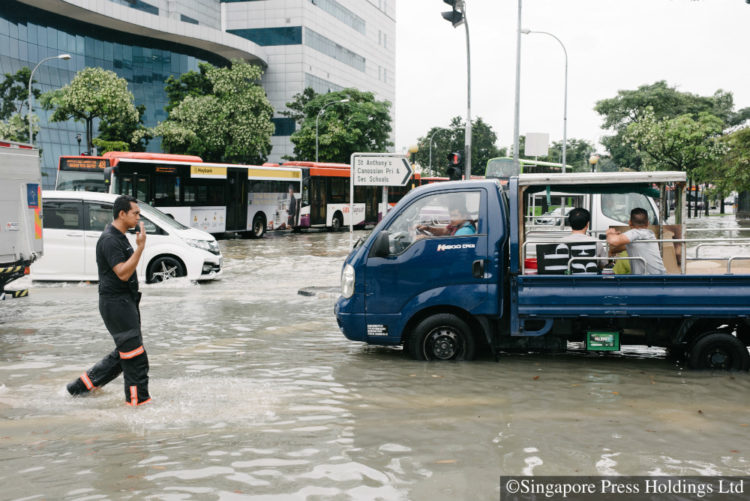 An SCDF officer from Changi Fire Station helping to direct traffic at the junction of Upper Changi Road and Bedok North Avenue 4. By 10.20am, the flood had subsided from waist-high levels.

Corporal Muhammad Shahrukh Selvaraj was on sentry duty at Changi Fire Station when he saw a car trapped in a flood outside.

The full-time national serviceman, 21, alerted his fellow firefighters who sprang into action immediately, pushing the stalled vehicle and helping the driver out of it.

For about an hour from 9am on Monday morning (Jan 8), 30 Singapore Civil Defence Force personnel helped seven drivers and pushed four vehicles, including a lorry, trapped on a flooded 40m-stretch along Upper Changi Road.

The firefighters also directed peak-hour traffic away from flooded areas.

“The guys didn’t complain about the water – they just went in straightaway. It was a fireman’s instinct to approach someone in distress to save them,” said Captain Ivan Ng, 31, who was the rota commander on duty at the time.

The road outside the fire station was one of nine locations in the eastern part of Singapore, including Bedok Road, Tampines Road and Sims Avenue, that experienced flash flooding on Monday morning. The waters subsided by about 10.30am.

Changi Fire Station also offered shelter to the affected motorists, one of whom had to be piggybacked from her car when she had difficulty getting out. The stalled vehicles were later towed away.

“When the drivers approached us, we offered them other ways to get to their destination… the surrounding roads are within our boundaries, so we knew best what the alternative routes were,” said Staff Sergeant Muhammad Asri Hamid, 29, who helped as a marshaller.

Station commander, Lieutenant-Colonel Jeffrey Ng, 41, said: “The marshallers were crucial in this operation because if they had not stopped the vehicles from entering the water, I think the drivers would have underestimated its depth.”