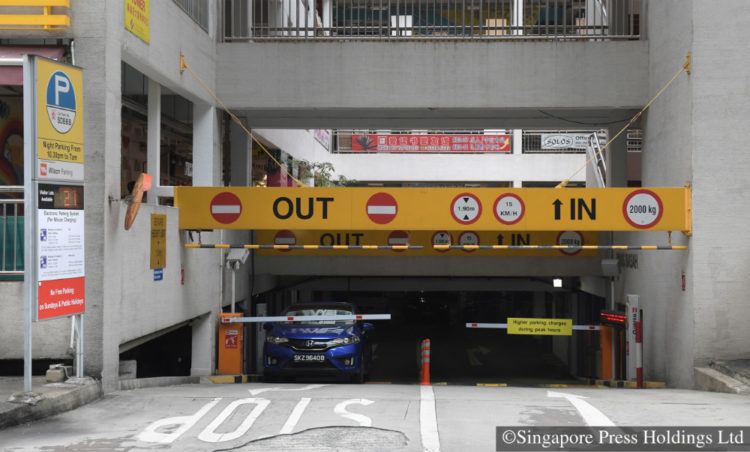 Drivers popping into the city area or a crowded hawker centre in the heartland have another reason to make it quick.

Parking at 22 popular Housing Board-managed carparks across the island has become more expensive during peak hours, with the HDB hoping it will deter drivers from lingering.

This hike is on top of a nationwide increase in rates at public carparks that began on Dec 1. Overall rates increased by 10 cents to 20 cents per half hour, depending on location.

But the rise is more drastic at the 22 carparks, generally sited in the city area and near certain food centres. For instance, rates at six HDB carparks in Rochor and Duxton shot up from $1 to $1.40 per half hour. The other 16 carparks also saw a hike from 50 cents per half hour to 80 cents now.

An HDB spokesman said that this “differential pricing” model helps to better manage parking demand in the city. Season parking holders are not affected.

News of the changes drew mixed reactions from business owners and motorists who frequent these areas. At Bras Basah Complex, carpark fees went up to $1.40 per half hour for most of the day, worrying shopkeepers who believe it discourages customers from dropping by.

Said Mr Richard Cho, 55, a watch dealer at Heng Wah Watch and Pen Company: “We are already seeing a 20 percent drop in walk-in customers this month due to the bad economy, and the increase in parking fees does not help.”

One motorist, Mr Tng Kim Guan, 50, who works in a hotel, was unhappy when he first saw the higher charges at Bras Basah Complex. But he was later relieved he was able to find a parking space more quickly.

He used to spend 10 minutes circling the carpark looking for a spot, but yesterday was able to get one immediately. “I am not sure if it is because of the higher rates, but I don’t mind paying a bit more if it makes parking easier,” he said.

The mixed sentiment is also mirrored at Golden Mile Food Centre, where peak-period rates were raised to 80 cents per half hour.

Several residents told The Straits Times they were glad the higher fees may discourage drivers from “clogging up” the Beach Road entrance to the carpark.

However, hawkers such as Mr Jahabar Ali, 47, said the traffic situation did not change after Dec 1. “If the congestion remains and drivers realise parking costs went up, who will still want to come and eat here?”

The higher HDB carpark rates are now similar to those charged by commercial carparks in the vicinity. For instance, parking at Bras Basah Complex is more expensive than at the nearby Odeon Towers, which charges $2.20 for the first hour and $1.10 for subsequent half- hour periods.

Previously, HDB did not charge extra for parking during peak periods. It first started to do so in 2009 at The [email protected] and Tekka Market to “manage the high demand for short-term parking space during peak hours and encourage higher turnover of vehicles”.

HDB and the Urban Redevelopment Authority (URA) manage about 607,000 and 24,000 parking spaces, respectively.

Asked if it will impose similar peak-period hikes, a spokesman for the URA said: “Many of URA’s carparks are located in the city centre, and it has been our practice to set our charges appropriately to manage parking demand in the city. This includes charging more if necessary during peak hours.”