Mercedes-AMG has revealed a new C63 S E Performance. The car has been launched simultaneously as a Saloon and an Estate.

As the name suggests, this new performance compact sedan has gained plug-in hybrid tech. But this move has also meant the ditching of the turbocharged 4-litre V8 of its predecessor.

Powering the Mercedes-AMG C63 S E Performance is instead a turbocharged 2-litre 4-cylinder, mated to a plug-in hybrid system.

Thankfully, this new drivetrain has the numbers to rival the V8. Up front, the 4-cylinder unit is an evolved version of the M139 engine already found in the likes of the C43 4Matic and SL43.

However, in this application, the electrically-assisted turbocharger of the engine is now larger.

This, alongside the fact that it is now powered by a 400V system as opposed to the 48V system found in the 43 models, allows a higher airflow rate and a high total engine output. 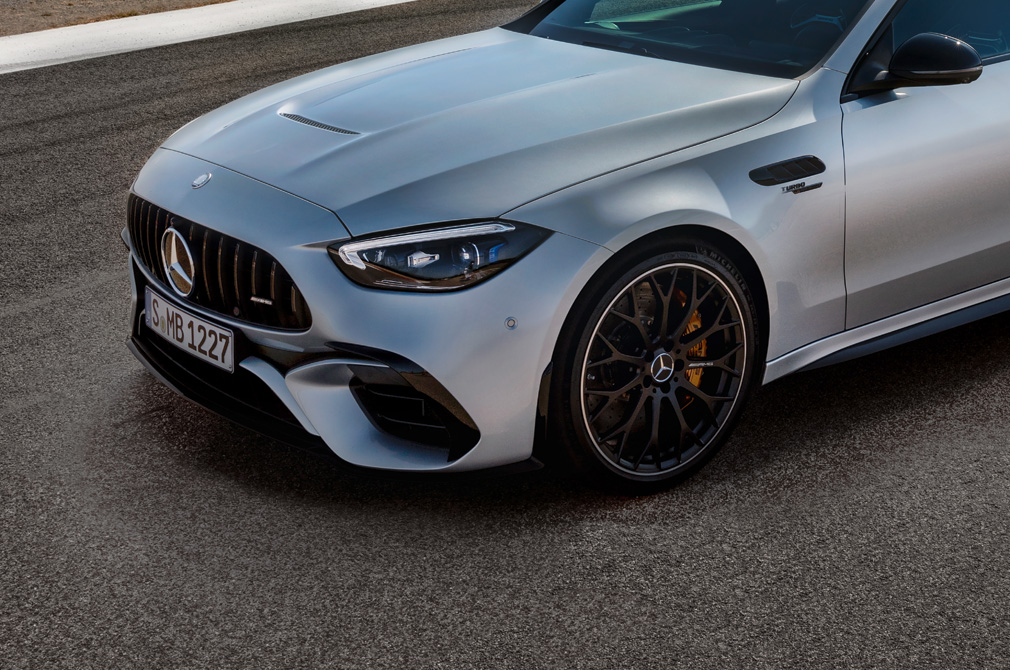 Mercedes-AMG states the output of this engine alone now stands at 469bhp and 545Nm of torque.

These figures will be complemented with an electric motor mounted at the rear. This electric motor generates a continuous output of 94bhp, and a maximum of 201bhp for up to 10 seconds.

This power, combined with an AMG Performance 4Matic+ all-wheel-drive system and a 9-speed multi-clutch transmission, will see both the Saloon and Estate accelerating from a standstill to 100km/h in 3.4 seconds.

A steel spring suspension will also rein in all this power, assisted by an adaptive damping system alongside rear-wheel steering. 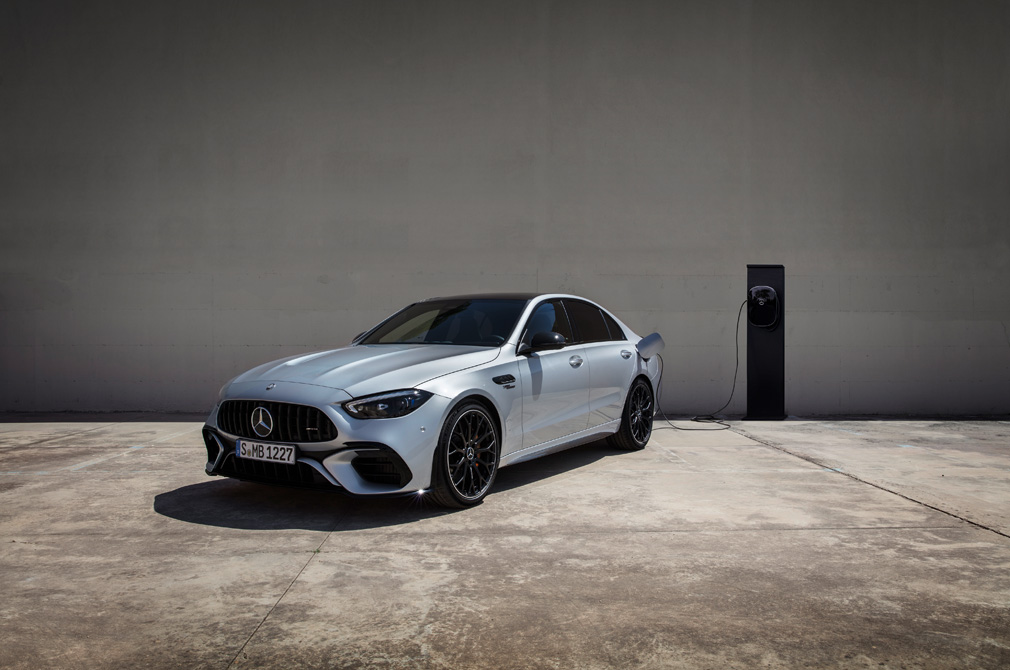 Plug-in hybrid battery can be charged at a maximum of 3.7kW.

Don’t expect to drive far on electric power alone though. The plug-in hybrid system utilises a 6.1kWh battery that delivers a pure electric range of 13km, so you’ll likely only be able to roll out of your carpark quietly.

In addition, the peak charging speed for this battery is 3.7kW.

MORE MUSCULAR THAN BEFORE

Thankfully, there’s plenty on the exterior of the new Mercedes-AMG C63 S E Performance to give away the fact that it’s no regular C-Class.

Mercedes-AMG states that the bodyshell for the C63 S E Performance has been thoroughly redesigned.

The car is now 83mm longer, 76mm wider at the front, and the wheelbase has been stretched by 10mm compared to the non-AMG C-Class for a more powerful, stretched, and muscular look. 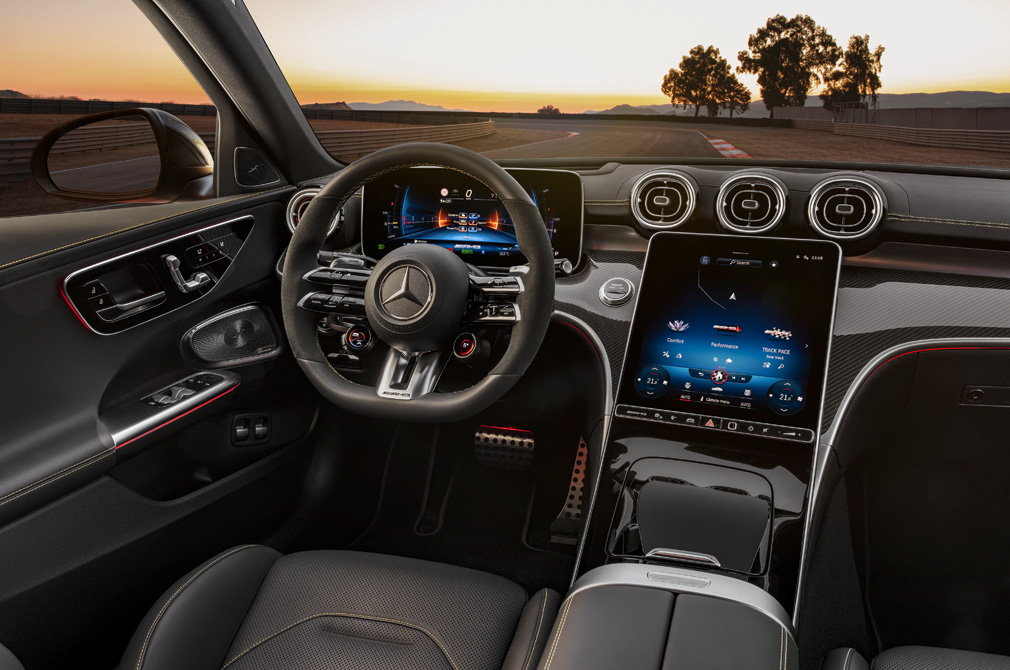 There’s also a new air outlet in the centre of the bonnet, nestled between the two power domes. This bonnet also now houses a black AMG emblem instead of the Mercedes star with laurel wreath, a first for a Mercedes-AMG production model.

Unique side skirts, a rear apron with large diffuser, as well as the two trapezoidal, externally ribbed dual tailpipe trims all also distinguish the car.

And in the cabin of the Mercedes-AMG C63 S E Performance are new AMG and hybrid-specific displays and functions, all displayed from the MBUX infotainment system. 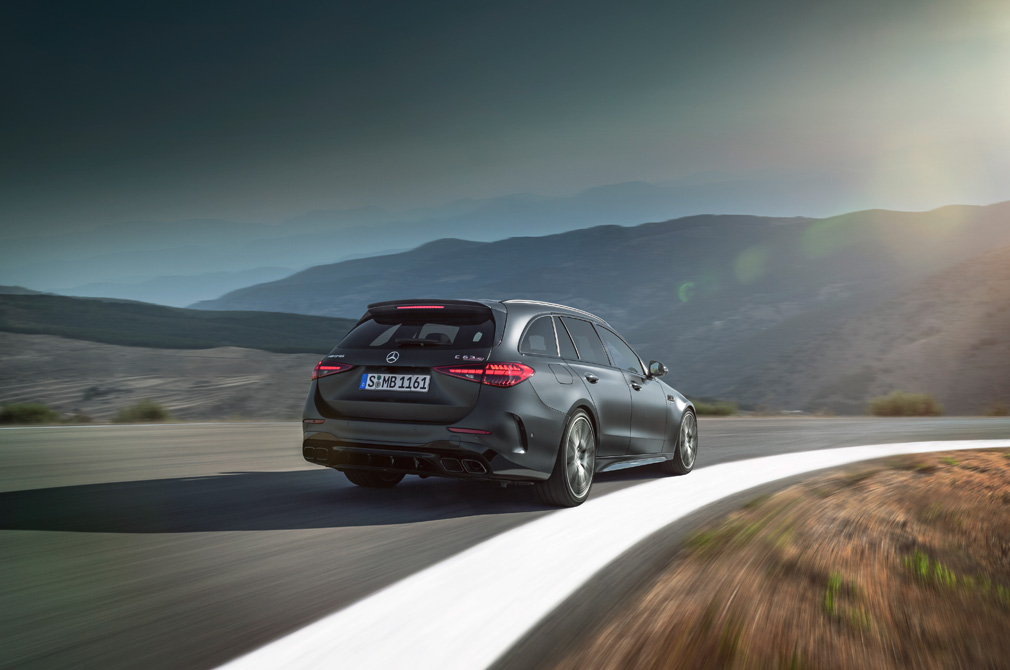 671bhp output means both Estate and Saloon will complete the century sprint in just 3.4 seconds.

An AMG-specific Supersport style layout in the instrument cluster will also offer the option of displaying various contents via a vertical menu structure.

These include a menu with hybrid-specific temperatures or a setup menu that displays the current settings for the suspension or transmission.