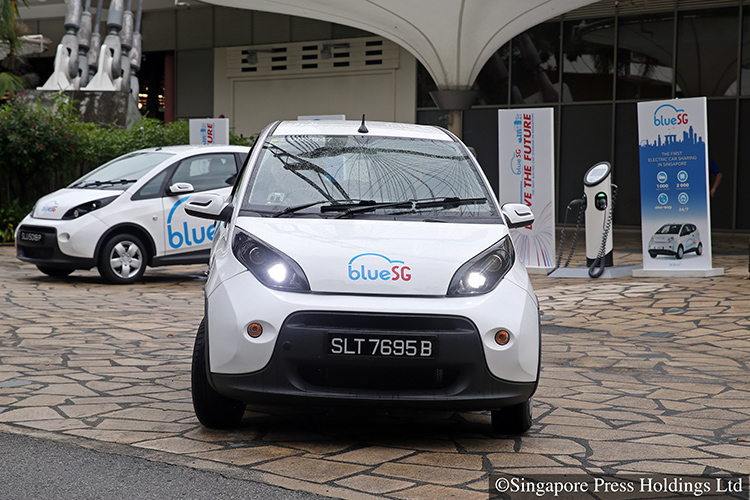 More charging stations will soon be available to electric car owners and users in Singapore.

Electric car-sharing operator BlueSG will begin opening its charging stations to other such vehicles from the first quarter of 2019.

The firm, a subsidiary of French conglomerate Bollore Group, made the announcement yesterday at an event marking the first anniversary of its operations here.

BlueSG’s charging stations at Housing Board and private car parks, as well as those of its stations operated by the Urban Redevelopment Authority and JTC, will be made available to private users.

The firm had earlier said about 20 percent – out of about 2000 charging points at 500 locations it expects to have across the island by 2020 – will be made available to private electric cars.

Users will be able to sign up for the service on BlueSG’s website, said Mr Vitte, adding that they will have to pay an annual fee in addition to per-minute charging fees.

BlueSG uses the Type 2 standard for electric charging, meaning all electric vehicles commercially available in Singapore now will be able to use its charging points.

The number of fully-electric cars here has jumped from 12 two years ago to 462.

This growth has been driven largely by BlueSG, which has a fleet of 300 cars, as well as 531 charging points at 135 locations. 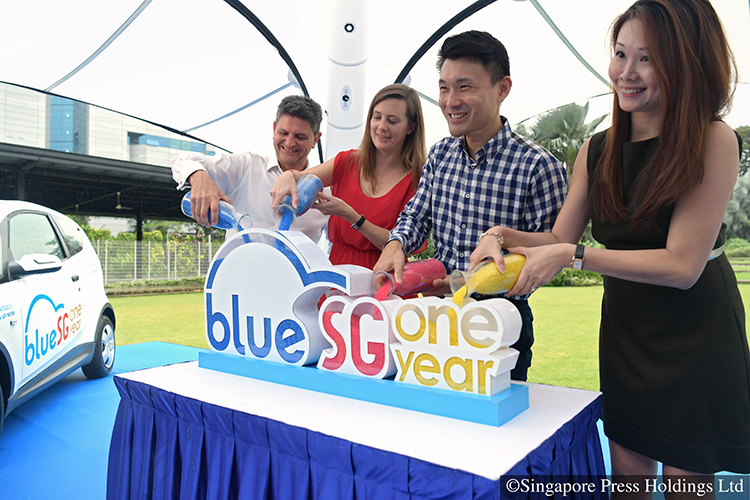 Mr Vitte said he hoped the opening of BlueSG’s charging points to private vehicles would foster the greater adoption of electric vehicles in Singapore.

Mr Lam Wee Shann, the Land Transport Authority’s technology and industry development group director, said: “The opening of BlueSG’s charging facilities for third-party use (provides) an additional charging option for owners of electric vehicles, as we move towards a greener and more sustainable urban transport system.”

Research has pointed to transport as a major source of pollution, with countries such as Britain planning to ban the sale of new diesel and petrol cars by 2040.

A study released by the European Climate Foundation in January suggested electric vehicles pollute only about a third as much as their petrol or diesel counterparts.

BlueSG’s announcement comes after utilities provider SP Group announced in October that it aims to roll out 1000 electric vehicle charging stations by 2020, double its initial target.

Within the next six months, BlueSG will introduce corporate membership plans, under which companies will be able to rent BlueSG cars for their employees.

The company also has a partnership with CapitaLand to set up charging stations at five of the property developer’s malls, including Plaza Singapura.

It will also open charging stations at Our Tampines Hub and Sentosa.

The firm has garnered some 20,000 users in its first year. One user, 28-year-old musician Jeffrey Ng, said he saves about $300 each month by using BlueSG, instead of taxis, though he hoped for more stations in the Orchard area.

BlueSG, which has 54 employees, will also conduct research and development in the areas of smart cities and intelligent transportation, together with local research institutes and corporations.