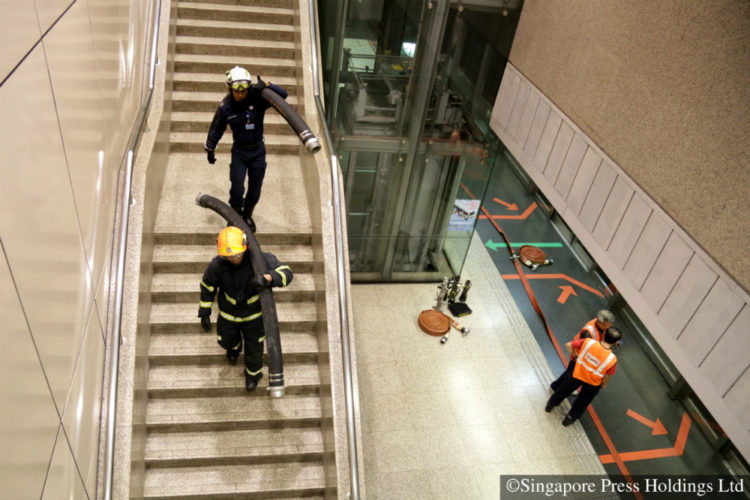 Train service on a large stretch of the North-South Line from Ang Mo Kio to Marina South Pier came to a halt for more than four hours yesterday evening after it was hit by two separate incidents – water collecting in the tunnel and then a trackside fire.

Thousands of commuters were affected, and while much of the train service was eventually restored, the two-way service between Newton and Ang Mo Kio was disrupted for the rest of the day with SMRT saying it hoped to get it back up today.

“This is expected to be a prolonged operation,” said a Singapore Civil Defence Force (SCDF) spokesman, on the effort to siphon the water which had entered the tunnel from Bishan to Braddell during the afternoon’s torrential rain.

The National Environment Agency yesterday issued warnings of heavy rain with gusty winds over many parts of Singapore. By 10pm, a total of 73.2mm of rain had been recorded in Tai Seng.

At 5.30pm, trains were stopped from travelling between Bishan and Toa Payoh after water was found in the tunnel.

Then, at about 5.55pm, a small fire was detected by a train captain in the tunnel between Marina Bay and Raffles Place stations. The SCDF was alerted but the fire went out by itself, said SMRT.

At about 7.30pm, SMRT said in a Facebook post that “for safety reasons, North-South Line train services between Ang Mo Kio and Marina South Pier” would not be available, as its engineers looked into both problems.

A total of 13 stations on the 26-station line were affected .

Free regular bus and bridging services were made available.

Large crowds had gathered at bus shelters, such as City Hall and Bishan, with several looking at their mobile phones intently, hoping to book a ride.

However, the situation remained calm and orderly, as SMRT staff inside the stations and at the bus stops guided commuters.

Uber Singapore said at about 9pm that it would temporarily suspend its dynamic pricing and encourage more private-hire drivers to go online to provide commuters another choice of transportation.

Train services between Newton and Marina South Pier resumed at about 9.30pm.

There have been previous cases of water entering MRT tunnels, but this is believed to be the first time it has affected train services.

In 2006, heavy rain in the morning left the Novena station with water-logged floors and a dripping ceiling. The water, which rose to a height of 5cm, seemed to have come from a nearby construction site.

SMRT yesterday declined to comment on the extent of the problem, but MRT tunnels are equipped with pumps which are supposed to kick in when water enters the tunnels.

SMRT said that its engineers would be working to restore the service by this morning, including carrying out network-wide tunnel checks throughout the night.

“This is to ensure the safety of the MRT lines before start of service.”

Earlier at about 12.30pm yesterday, the North-East Line was hit by a delay, but services resumed after 20 minutes. It affected the train service towards Punggol MRT station due to a train fault at Sengkang station.