Porsche flying car: Could this be it?

How would you like your future flying car to be a Porsche?

That could be a reality if Porsche and Boeing’s collaboration produces something that eventually takes you airborne.

Both firms announced on Oct 10 they will explore the “premium” air mobility market, leveraging on each others’ unique strengths.

The news comes after German aviation startup Volocopter said Singapore is emerging as one of the most likely destinations for the commercial launch of its electric helicopters.

Volocopter eventually hopes to offer short-hop flights for the price of a limousine ride.

Their prototypes consist of a two-man pod kept aloft by a multi-bladed trellis of propellers.

As part of the partnership, the companies will first form an international team to “address various aspects of urban air mobility”, including analysis of the market potential for premium vehicles and possible use cases.

The operative word here is “premium” – Porsche is clearly not looking to move everybody around, just those that have deep pockets.

That means it could resemble the earlier Volocopter, which takes off and lands just like any normal helicopter, just with more rotors.

Engineers from both companies, as well as from lesser-known Porsche subsidiaries Porsche Engineering Services GmbH and Studio F.A. Porsche, will implement and test a prototype, the German automaker announced. 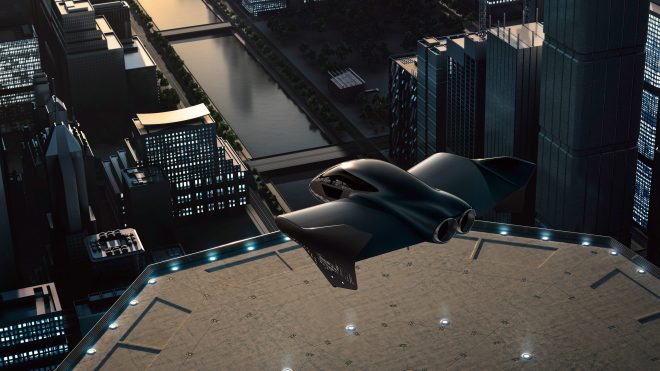 An artist’s impression of the new Porsche flying car taking off in a crowded city.

In photos sent to the press, the “premium” Porsche flying car appears to have a sleek, aerodynamic fuselage with stubby wings.

Two huge pipes, which we assume are exhausts, form the rear.

Think of it as a Le Mans car, but with wings on either side.

Of course, these are early days, so the design of the Porsche flying car could change at any moment.

It’s the explosive growth in urban air mobility that has Porsche interested.

The urban air mobility market will pick up speed after 2025, according to a 2018 study by Porsche Consulting.

The study indicates that urban air mobility solutions will transport passengers “more quickly and efficiently” than current conventional means of terrestrial transport, at a lower cost and with greater flexibility.

As Porsche’s current lineup of vehicles consists of “conventional” terrestrial transport, the company looks to be hedging its bets to sustain future growth.

And Porsche’s member of the executive board for sales and marketing, Detlev von Platen, appeared to say as much.

Porsche wants to “enhance its scope as a sports car manufacturer by becoming a leading brand for premium mobility,” Mr von Platen said, adding that it could mean moving into the “third dimension” of travel in the long term.

Vice-president and general manager at Boeing’s NeXt Steve Nordlund added the collaboration with Porsche provides an opportunity to develop a “premium” air mobility vehicle.

Porsche Carrera Cup Asia: A glimpse behind the scenes

BMW to offer preview of new iDrive at CES
This site uses cookies to help us serve you better. By continuing to explore our site, you accept our use of cookies.I Accept