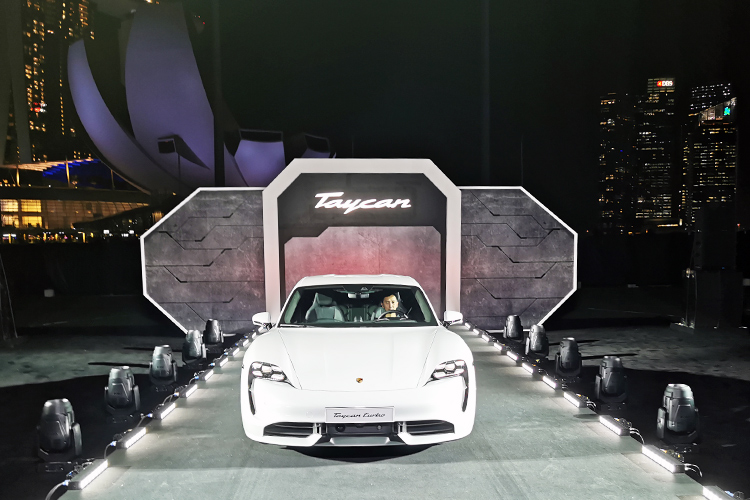 The Porsche Taycan Turbo was unveiled in Singapore last night (November 21). The event, which took place at The Float at Marina Bay, featured a squad of stormtroopers flanking the car as it emerged on stage.

Porsche’s Taycan is the brand’s first modern electric car. Its very first electric vehicle, the P1, was produced 121 years ago in 1898.

Design-wise, the Taycan looks like a 911 with four doors. Dimensionally, it is similar to a Panamera. There are currently three models in the Taycan range – Taycan 4S, Taycan Turbo and Taycan Turbo S.

The Porsche Taycan Turbo has a gross battery capacity of 93.4 kWh. It has two permanent magnet synchronous motors (one on each axle) that provide up to 616hp (625ps).

When launch control is activated, the overboost provides 671hp and a maximum 850Nm of torque. Standard Surface Coated brakes or the optional carbon-ceramic brakes, in addition to the regenerative braking, provide stopping power.

Launch control also enables the Taycan Turbo to hit 100km/h in 3.2 seconds. Thanks to its two-speed gearbox, the car’s top speed is 260km/h.

Taycan deliveries in Singapore, however, are only slated to begin in Q3 2020.