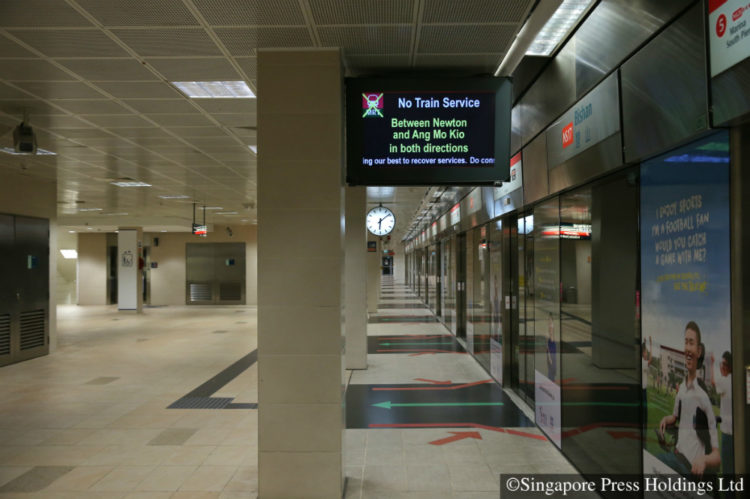 Pumps at all MRT tunnels have been checked, and necessary repairs made, to prevent a recurrence of last Saturday’s flooding of the North-South Line tunnels.

The Straits Times understands that SMRT engineers are also examining ways to beef up the pump system by building in more redundancy, including adding pumps.

Last Saturday’s flooding of a tunnel between Bishan and Braddell stations rendered a long stretch of the line inoperable for around 20 hours, and caused delays in other parts of the network well into Sunday. The disruption, the first caused by flooding here, ranked as one of the worst rail breakdowns in Singapore.

A faulty float switch was found to be behind the pump failure which led to the tunnel flooding. The electrical switch attached to a flotation component turns on the pumps if water is present and causes the float to rise.

The Straits Times understands that operator SMRT has checked its pumps at all other tunnel portals – the locations at which the underground rail meets the surface, posing potential entry points for rain into the subterranean network. An unspecified number of flaws were detected, including those at Bishan-Braddell, and have been fixed. It is not known when the pumps were last serviced.

SMRT engineers are also looking at building more redundancy into the system, including installing individual float switches for each pump, and adding pumps.

Whether the pumps in the tunnels between Bishan and Braddell stations would have been able to evacuate all the rainwater if they had kicked in last Saturday has yet to be ascertained. But the authorities said there was no reason to think it was a pump capacity issue, pointing to rainfall statistics.

According to the National Environment Agency (NEA), Bishan experienced the second-highest rainfall of 42.2mm within 30 minutes among all areas on the island last Saturday. Queenstown had the highest that day, receiving 45.6mm of rain within a 30-minute period.

A year ago, 96.8mm of rain was recorded in Queenstown within 30 minutes.

“While the rain over some parts of the island on Saturday was heavy, it was of relatively short duration and the rainfall recorded was not unusually high if compared with the long-term highest rainfall records for October,” an NEA spokesman said yesterday.

In an earlier forecast, the agency had said rainfall for the first two weeks of the month “is expected to be above normal”.

Last Saturday’s incident led to a train being stuck in the flooded tunnel. Fortunately, there were no passengers on board. The train managed to pull up to Bishan station and then proceeded forward, only to stall in the rising waters.

Commuters who were affected that day included retiree Lee Chiu San, 71. “It was my first experience of a major MRT breakdown. Utter chaos and no direction from the staff,” he said.

From his home in Seletar, he took a bus to Yio Chu Kang station. “The staff there let me board the train. It moved very slowly to Ang Mo Kio and would not continue.”

He managed to get off the train.

“The crowd numbered in the thousands. There were supposed to be free buses, but nobody told us where to go. Taxis all had ‘on call’ or ‘busy’ signs on. The queue at the taxi stands went round the building,” he recalled. “If they had told me not to board at Yio Chu Kang, it would have been better because there is a direct bus to Orchard Road from there.”