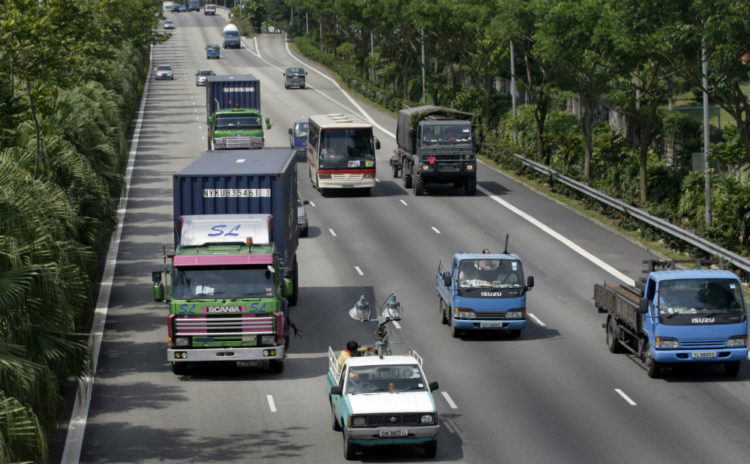 Heavy vehicles on the Pan-Island Expressway.

A trial to test speed tracking and speed limiting devices on heavy vehicles is expected to start soon.

According to documents obtained by The Sunday Times, the Traffic Police (TP) plans to test these devices on 20 heavy vehicles over a period of six months or until the vehicles have accumulated 20,000km.

The TP has called for tenders for 10 sets of digital tachographs, which provide a record of a vehicle’s speed, allowing the authorities to track and record instances where speeding occurs.

The trial, expected to start six weeks from the award of the tender, will also include the testing of 10 sets of enhanced speed limiters, which can restrict the speed of these vehicles. Both types of technology should have the capability to transmit locations of heavy vehicles wirelessly or allow the authorities to retrieve the vehicle’s speed log on the spot and be uploaded to a back-end system.

There has also been a higher number of fatal incidents involving heavy vehicles, with at least 19 as of mid-June this year, up from 16 in the same period last year.

The trial was announced in September last year by Home Affairs and Law Minister K. Shanmugam, who said it would study if tracking technology should be installed in all heavy vehicles to promote safe driving.

Safer Roads Industry Taskforce, which was formed in 2013, had made this recommendation. In that year, several tipper truck accidents made headlines, including a crash in Tampines which killed two boys.

In this upcoming trial, the authorities will require the winning bidder to also provide a system that can send out alerts if the equipment were to fail. Among other requirements, they are expected to give heavy vehicle drivers audio warnings when their speed exceeds the pre-set limit. These systems should operate for 24 hours, even when the vehicle is stationary or not in use.

Mr Aman Aljunied from the Singapore Safety Driving Centre said that while installing tracking devices may add to operators’ cost, these serve as reminders and a means of control for drivers who ignore road signs for speed limits.

Singapore Road Safety Council chairman Bernard Tay said the latest move puts more responsibilities on employers, allowing them to find out how their drivers are performing. He added that such trials are a sign that Singapore is “catching up” to what other countries do.

In European Union countries, in-vehicle speed limitation is required for heavy goods vehicles, and so are tachographs, which log factors such as distance, speed and driving times, as well as rest periods of a driver.

“I hope the information gathered will enable employers to shape the behaviour of drivers,” he said. “Where needed, drivers can be sent for counselling and training, to improve their skills. Hopefully with that, there will be fewer accidents.”