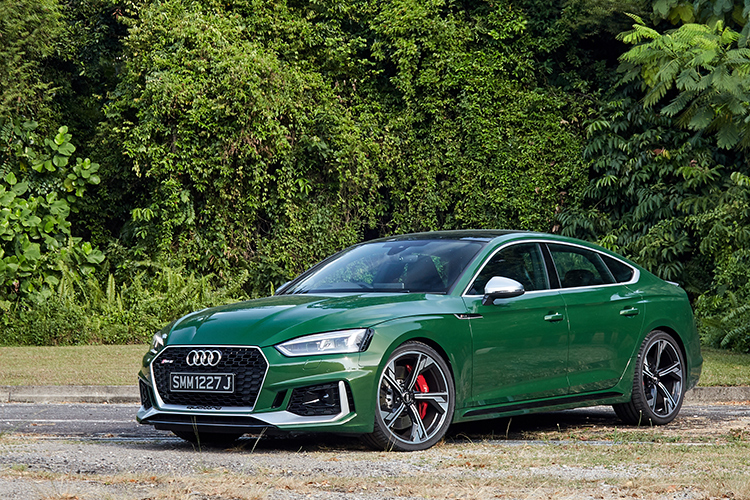 Audis have a reputation for understatedness.

One look at an A3 or A4 saloon is enough to confirm this. Even the A6 and A7 models are designed around the “quiet, but handsome” philosophy.

Audi RS models, on the other hand, are at the opposite end of the spectrum. Compared to their sombre-looking, suit-wearing corporate siblings, the RS models are the athletes of the family.

And they look the part, too. Loud paint colours, big wheels, bigger air-intakes and louder exhausts are their calling cards. They’ll shake-up any boardroom with their looks and boisterous voices. 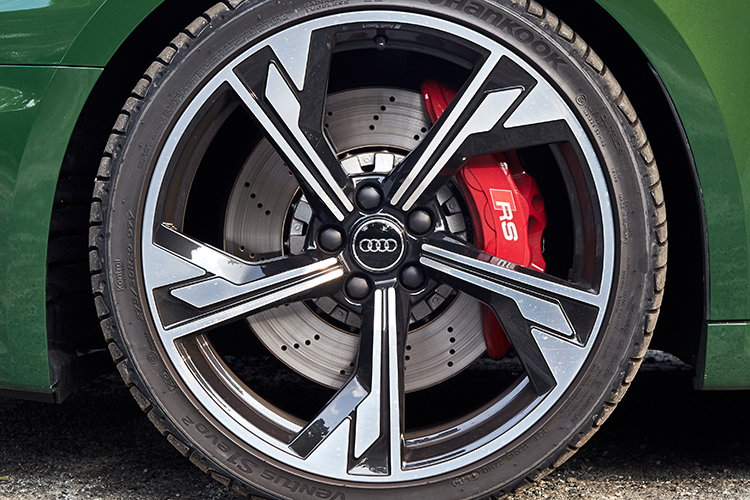 One look at the Audi RS5 Sportback confirms this. No boring silver or gray colours here. The test unit comes in what I would describe as a “Poisonous Green”.

The colour sounds harmless enough. But the Audi RS5 Sportback looks anything but innocuous.

Standard 20-inch wheels lurk from the wheel arches, which Audi has endowed with what it calls “quattro blisters”. These wheel arches are 15mm wider than the ones on the standard A5 Sportback. Open the rear doors and you’ll see that they’re wider than usual. 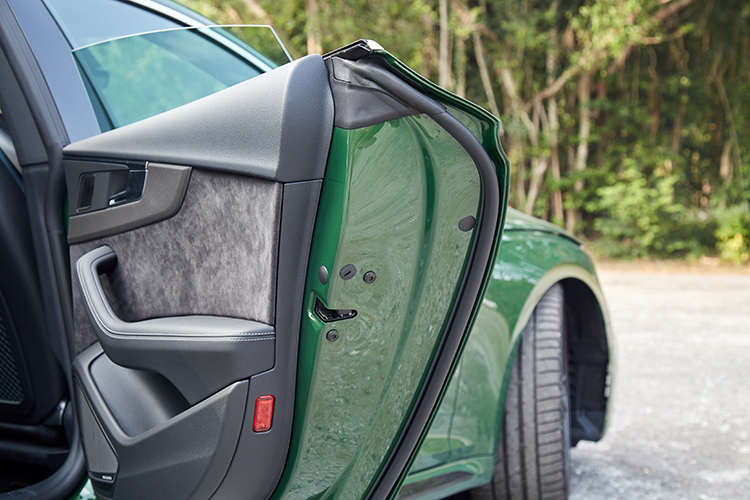 Rear doors are noticeably thicker on the RS model.

The best seat is, of course, behind the wheel. Here, you’ll find a low driving position, alloy pedals and an RS-specific virtual cockpit display. The flat-bottom steering wheel, covered in perforated leather, offers a positive grip.

The real treat, however, is aural. Depress the brake pedal, thumb the ignition button and the engine roars to life, hinting at the performance it’s ready to unleash. 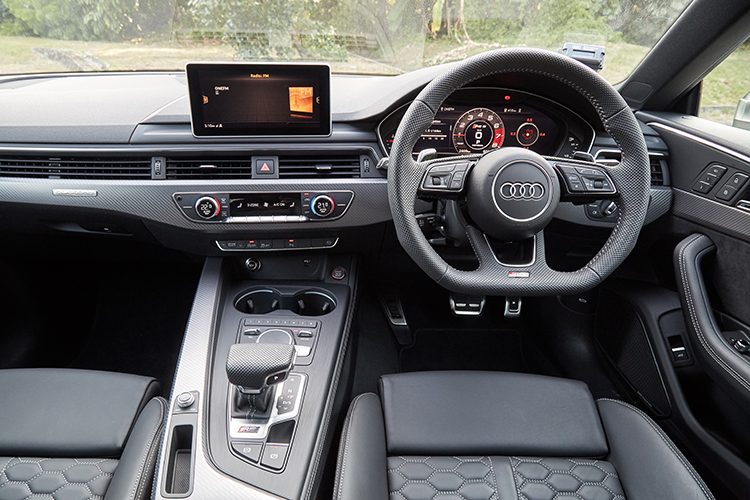 The Audi RS5 Sportback’s power output hasn’t changed, despite the fact that the RS5 now “only” has a 2.9-litre V6, instead of its predecessor’s 4.2-litre V8. But this powerplant makes up for it with a pair of turbochargers, as opposed to being naturally aspirated.

That means the Audi RS5 Sportback still delivers 450hp. And instead of 430Nm, the car now has 600Nm. And more importantly, the turbocharged V6 lets you access these outputs much earlier. 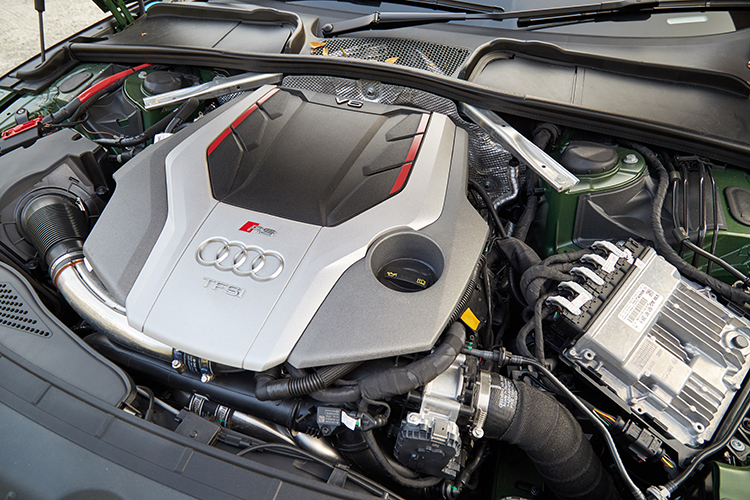 But what does this mean to the driver? Well, if you’re used to naturally aspirated engines, you’ll need to exercise more finesse here. That’s because the Audi RS5 Sportback is always raring to go.

With the engine set to Dynamic and the gearbox in “S”, the Audi RS5 Sportback delivers rapid, no, instantaneous responses. You never have to wait.

Depress the accelerator even a third of the way and the Audi RS5 Sportback doesn’t just leap off the line – it surges powerfully towards the horizon. The 20-inch tyres latch onto the asphalt with nary a complaint, helping propel you forward. 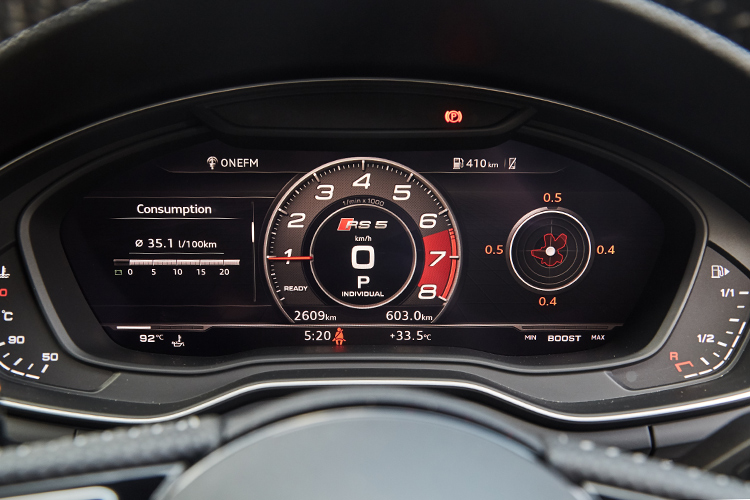 The Audi RS5 Sportback’s quattro all-wheel-drive system further enhances traction here. As standard, the power distribution to the front and rear axles is 4-40:60.

These ratios, however, will be the last thing on your mind when you do find the few winding roads we have. Nail those strong brakes, turn in and give the accelerator some pressure and the Audi RS5 Sportback is just faultless.

It latches onto the tarmac, and even before the road straightens, already begins rocketing you forwards. The grip is incredible, the power delivery once again seamless. 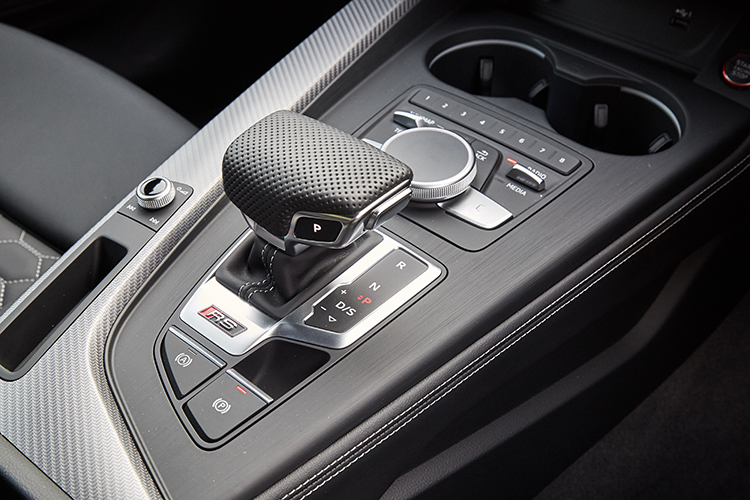 But after 100km in the Audi RS5 Sportback, one thing became painfully obvious. This is not a car I’d want to drive to and from work every day. All that awesome handling comes with the downside that is an unyielding ride.

I’ve said this many times, but it bears repeating: Singapore’s roads have become rough. And undulations are not the Audi RS5 Sportback’s friends.

Bumps and surface imperfections were okay at the start. But by the third day, I was wincing each time I approached a rough stretch or speed bump. 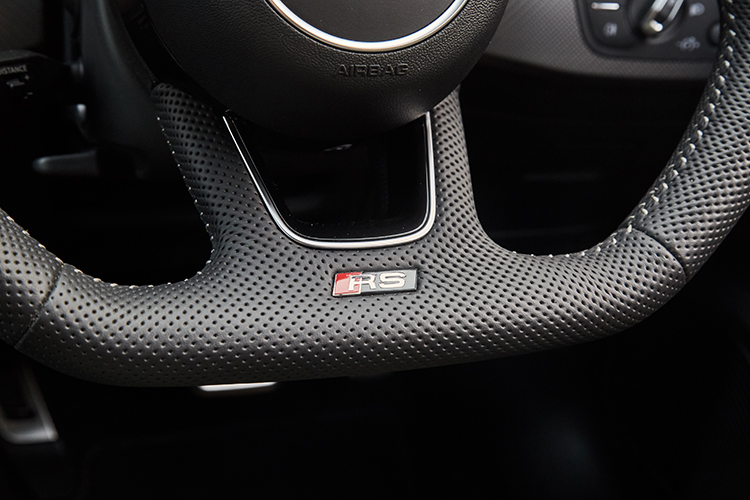 On a smooth racetrack, the Audi RS5 Sportback would be right at home. No bumps (just kerbs) and all the room to unleash its German horses. In Singapore, it’s fun for a while. After that, it becomes tiring.

Don’t get me wrong. The performance is sublime. And the soundtrack – rumbing, roaring and popping – is fantastic, considering the engine is a turbocharged V6.

However, not even that and the drivetrain’s urgent responses can make up for the woolly ride. It is not the Audi RS5 Sportback’s fault, though. After all, this green monster was made to dance on track, not boogie on the road. 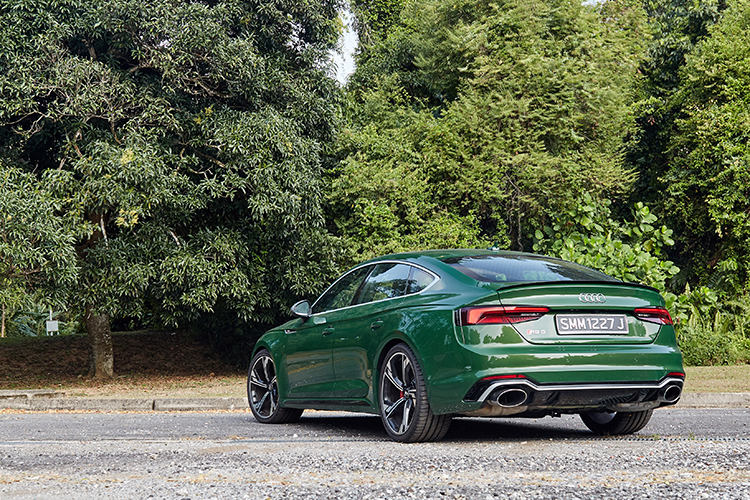