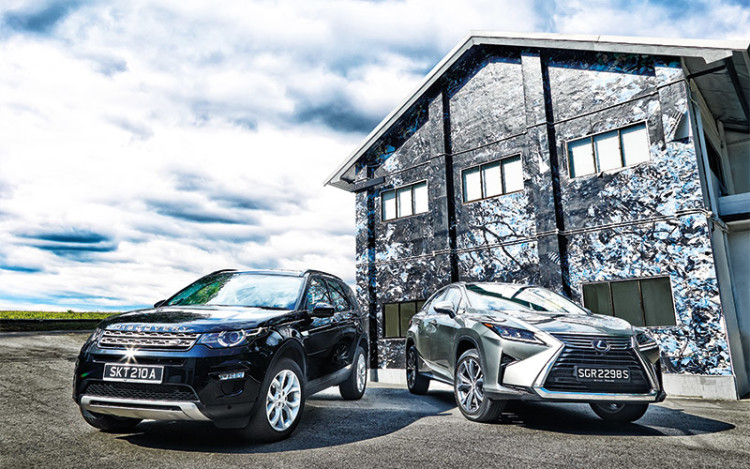 The sports utility vehicle (SUV) segment is a crowded one, with plenty of contenders, big and small, jostling with one another for consumers’ attention. The “compact premium” SUV sub-segment is particularly heated, with virtually every carmaker of note offering something to compete against the rest in the same keenly contested sector.

Two of them are Japan’s Lexus and Britain’s Land Rover. The latter is known for its SUVs, with the latest Discovery Sport aimed at modern nuclear families who desire a ruggedly stylish/squarish Landie packed with practicality.

In contrast to the Lexus, the Discovery Sport looks conservative, although its presence is still imposing. Land Rover’s hallmark chunky style is all there, complete with a chrome mesh grille and a clamshell bonnet that has the model name “DISCOVERY” stamped large on it. You’ll never mistake this land vehicle for anything other than a Landie.

The two cars’ interiors follow pretty much the same themes as their exteriors – swoopy for the Lexus and chunky for the Landie. 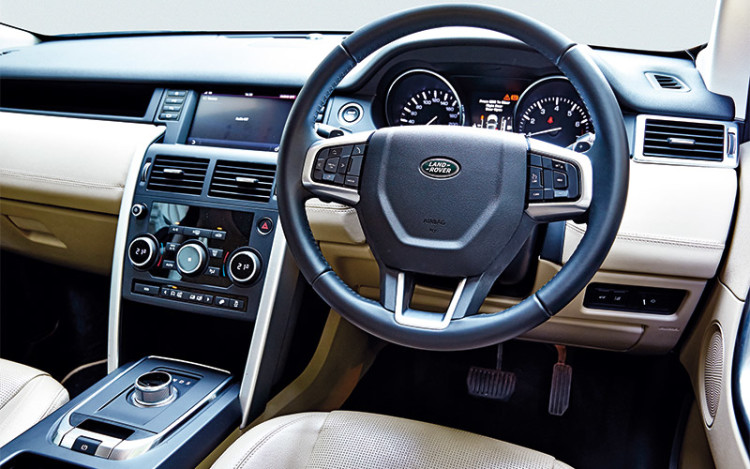 Bringing the luxe factor up a notch in the RX is the nice soft leather trim on the dashboard and the precision laser-cut wood trim on the centre console.

A 12.3-inch colour infotainment screen dominates the top of the fascia, with the functions controllable via Lexus’ Remote Touch System, which consists of a touchpad and a “mouse” located down by the gearlever. There’s also a head-up display.

Instead of the Lexus’ interior “softness”, the Landie has hardy plastics aplenty, and they seem to be ready for years of abuse. 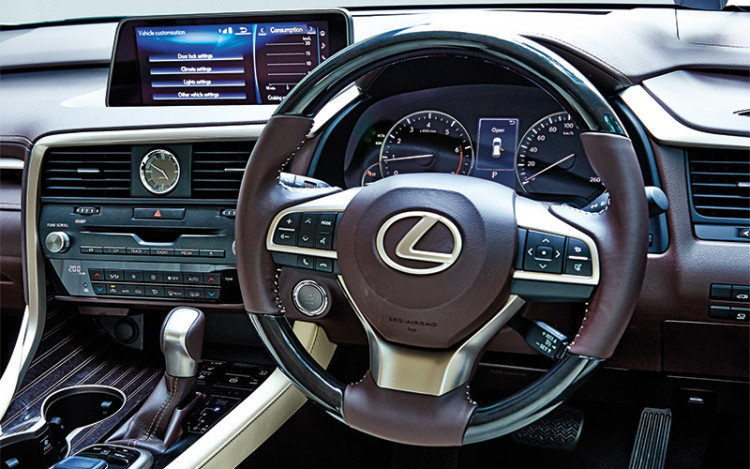 The dashboard design is clean and functional, with most of the major controls within easy reach. It makes do with a smaller screen (8-inch) for its infotainment system. Four well-placed USB ports make it convenient for occupants to charge their gadgets on the go.

The Discovery Sport’s cabin trump card is its ability to ferry seven people, by deploying the pair of folding rear seats in the boot area. The five-seater RX hits back with its electrically folding/reclining backseats.

Both vehicles are powered by 2-litre turbocharged 4-cylinder petrol engines, with nearly identical horsepower and torque outputs  – 238bhp and 350Nm for the Lexus, 240bhp and 340Nm for the Landie. 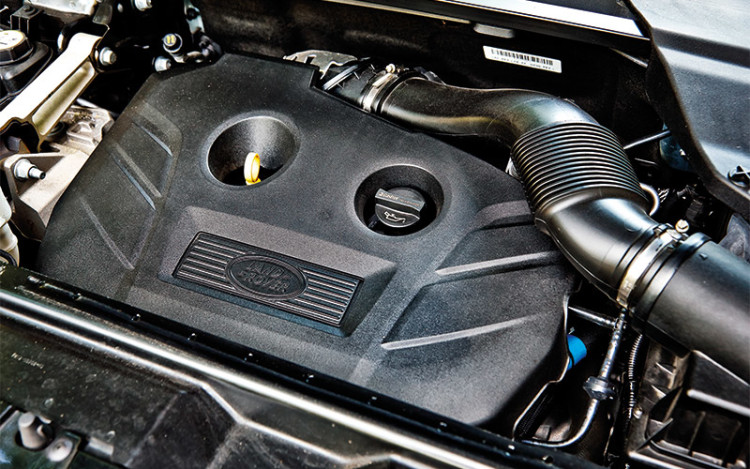 However, the Land Rover is faster from a standstill to 100km/h, clocking 8.2 seconds, compared to the Lexus’ 9.5.

Indeed, the Landie does feel that much quicker in acceleration, helped by its 9-speed automatic gearbox that swops cogs faster and more often than the Lexus’ 6-speeder.

The RX is slower and, at the same time, more laid-back in its driving demeanour. It wants to be “casual” on the move, and prefers not to rush. Complementing this characteristic is the Lexus’ highly refined ride quality, with superb damping that cossets the occupants.\ 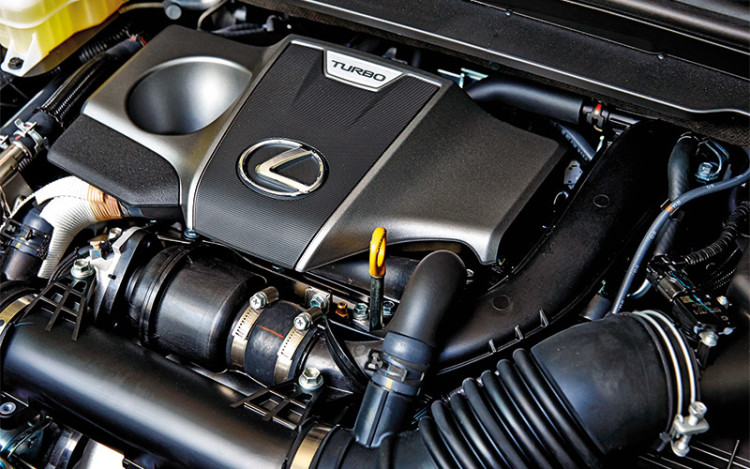 The RX200t’s engine is more relaxed than the Disco Sport’s.

The Landie isn’t uncomfortable, but its level of comfort is lower than that of the lush Lexus.

When it comes to cornering, neither car is going to excite the enthusiast driver. But both cars handle reasonably well by SUV standards, with the Landie providing a touch more precision through its decently weighted steering, and changing direction like a smaller vehicle. The RX is more passive, with light steering that lacks feedback, but taking it through a corner is stress-free.

Both SUVs are equipped with four-wheel-drive, but the Landie is probably more likely to survive a tough trip off the beaten track, thanks to its Terrain Response system that can help the car adapt to various surfaces, including grass, gravel, snow, mud, sand or an off-road rojak of all five surfaces.

The RX doesn’t have a similar 4×4 system because it’s a suburban SUV that’s meant to hang around in the city. 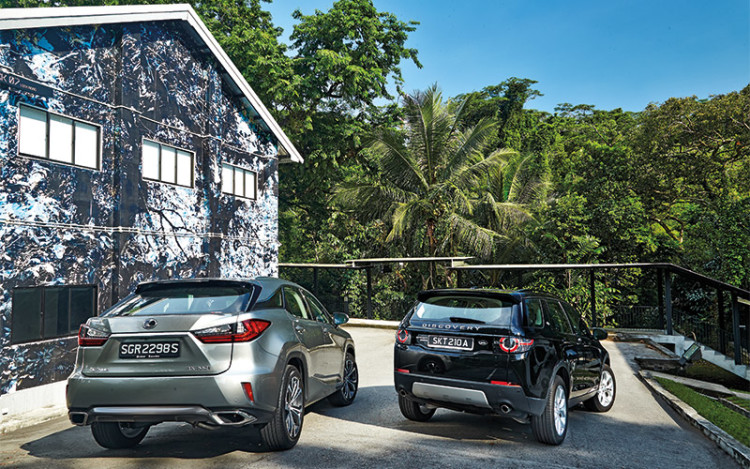 The Lexus RX200t and Land Rover Discovery Sport compete in the same “compact premium” SUV sub-segment, but have vastly different strengths and personalities.

The Discovery Sport scores well in practicality, performance and off-road capability, while the RX200t majors in comfort, luxury and refinement.

Just $11,000 separate the two SUVs on the price list at press time. Choosing one over the other boils down to your own priorities as a 2-litre turbo SUV user.