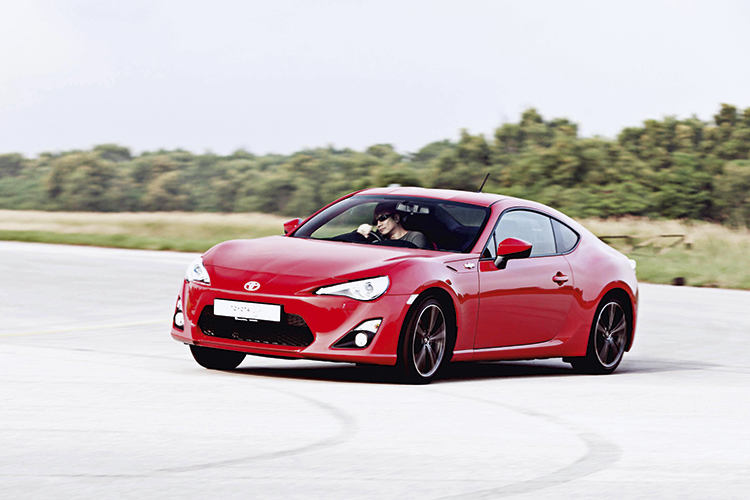 To get the “drift” in the oversteery 86 is to discover the joy of opposite lock.

The last Toyota I test-drove before this one was a new Camry. It’s like drinking kopi-o in a nondescript coffee shop with Zoe Tay – and then sipping a latte in a chic cafe with the attractive, talented and vivacious Olivia Ong. Yes, switching from a “venerable uncle” saloon to a “vulnerable young man” coupe can be a shock to the system.

Shocking, too, is the attention the 86 attracts. Boys in bodykitted Vioses wanted to race with the car, grown men in anything from BMWs to VWs were checking it out, and random bystanders couldn’t help taking a closer look. One guy at my office carpark asked me, “New Celica ah?” 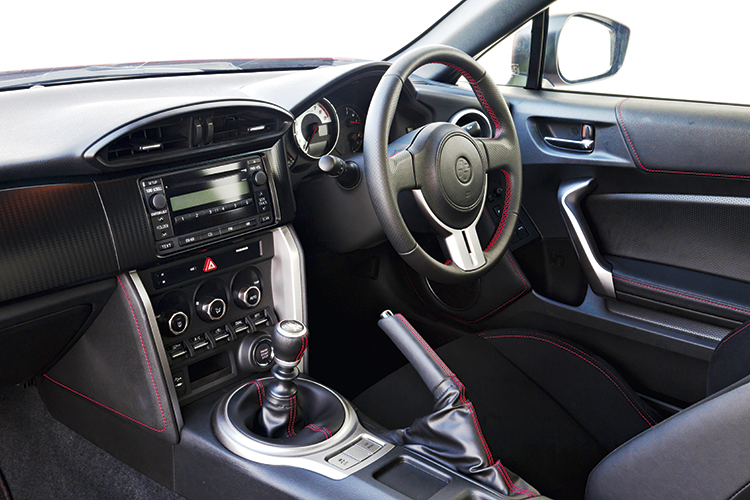 Stereo system in the 86 might look like it’s from 1986, but the cockpit is otherwise up-to-date and downright sporty.

Not quite. Even though the defunct Celica (1999-2006) was capable in its heyday, especially in Yamaha-tuned 190bhp SS-II guise with Super Strut suspension, the 86 is a dramatically different kettle of fish (that can fishtail on command). It’s a low-slung, high-drama driving machine that uplifts the image of Toyota like how the LFA supercar burnishes the Lexus brand. In locomotive terms, Lexus’ finest is a sophisticated bullet train and the 86 is a Hakone “Romance Car” – much slower, mechanically simpler, but thoroughly enjoyable in its own wonderful way.

The enjoyment begins when I give the two-door Toyota a once-over. Our test car’s “greased” Lightning Red paintwork is perfect, the bodywork has even more curves than an A1 AV idol, and the front end could be the face of a staunch samurai, his katana drawn, staring down another in a sashimi slice-off.

This road warrior sits close to the tarmac on 17-inch cast aluminium wheels, which are the lightest of their size in the Toyota inventory and have a specially reduced centre cap diameter (49mm versus the usual 60mm) to make the spokes appear longer. At the rear, twin chrome-tipped tailpipes protrude from below the bumper, signalling the car’s performance intent. Interestingly, said pipes have an inner diameter of exactly 86mm. 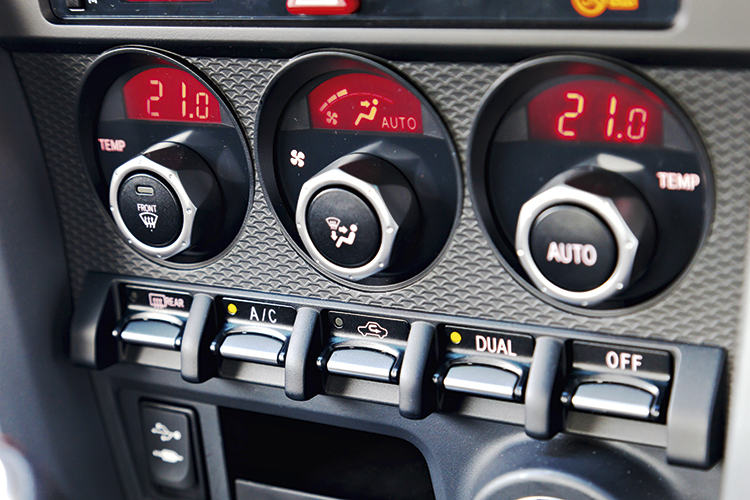 The exhaust system is the back end of a horizontally opposed (or boxer) 2-litre 4-cylinder engine which, believe it or not, has a square bore-and-stroke of 86mm. It doesn’t have a power figure of 186bhp, by the way. Instead, it has 200bhp, which equates to a specific output of 100bhp per litre – respectable for a naturally aspirated unit, but hardly a breakthrough when Honda’s last JDM Civic Type R boasts over 112bhp per litre from its K20A i-VTEC powerplant.

The boxer engine is essentially Subaru’s, but its direct injection cylinder head and 6-speed transmission are Toyota hardware. In a rare display of solidarity between business rivals, the two automakers shared expertise, engineers and even some “shop” space during their development of the 86-BRZ.

Now the cockpit beckons, ready to transport me to the heart of the action. I drop into the driver’s seat, which lies even closer to the blacktop than in a Porsche Cayman (or MR-S for that matter), and the petrol in the veins of this petrolhead start pumping faster. After a few adjustments, the driving position is spot-on, or to be more exact, sport-on. 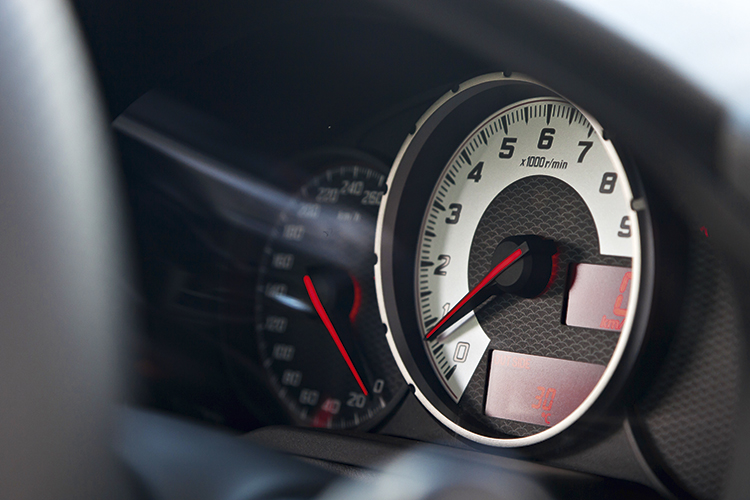 The sports bucket seat indeed provides a bucketful of sporty support. It could pass off as a Recaro replica (from an Autobacs store), complete with racy red embellishments for that Ferrari effect. But the fabric is basic and the vinyl patches are more suitable for a Crown cab – the leather/Alcantara option would have been much cooler (and costlier).

More important than any upholstery is the ergonomics, which feels as comfortable in this coupe as your favourite pair of running shoes – you simply slip them on, lace up and pound the pavement without delay. Underfoot in the 86 cockpit, the pedals have a good grip on your soles (whether footwear or bare feet), with those for the brakes and throttle enabling stress-free heel-and-toe footwork. 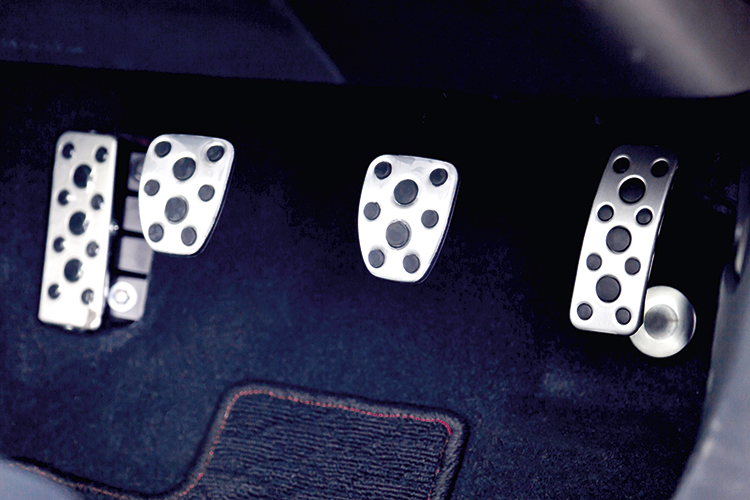 Looking out the windscreen, the view is bookmarked on either side by the bonnet “biceps”. An unusually compact, frameless rear view mirror blocks very little of the glass area, yet offers decent visibility towards the back. Smack in the centre of the instrument cluster is a white tachometer, with a digital km/h read-out (in the GS-spec 86 tested here) to supplement the speedometer proper. Upon engine ignition, the needles arc across the dials and back again, with the tacho pointer swinging temporarily towards the pre-set rpm level where the shift light would illuminate in red. 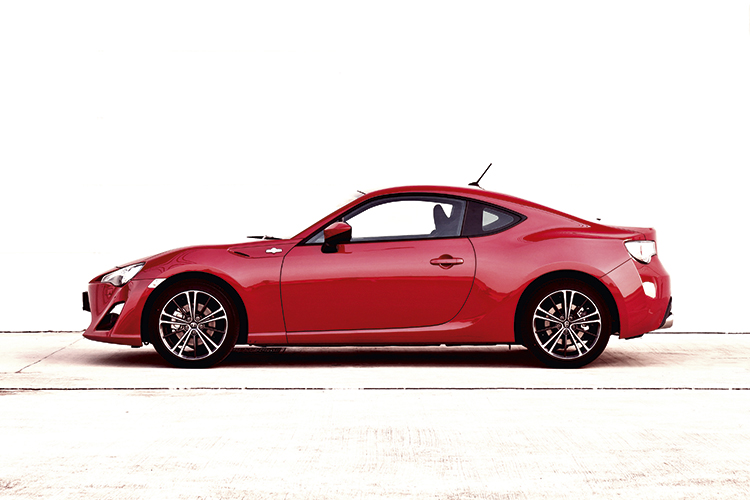 This built-in “prompter” will appeal to the boy racer, who can set his desired “reminder” in 100rpm increments between 2000rpm and 7400rpm, with or without a triple-beep alert (“b-on” or “b-off” in the multi-function display). Of course, he can still “forget” to change up a gear, even with the red lamp shining like a little traffic light and the buzzer beeping like an alarm clock, but he won’t be over-revving the engine, because there’s an interruptive rev limiter that kicks in at the 7400rpm redline. The boxer engine powering the 86 has a bore of 86mm, a stroke of 86mm and exhaust tailpipes 86mm in diameter – freaky.

The device even interrupts your century sprint attempt – the car touches 100km/h in second gear before the rev limiter knocks back 300rpm or so and the speed is cut to about 98km/h. No biggie, anyway – just upshift into third gear and continue sprinting in the machine.

Its 6-speed manual gearbox is quite a blast from the past for the enthusiast, who can hear the gears engaging and feel the box working away. The gear lever is close at hand and a pleasure to use, slotting into the gates like a solid rifle bolt (although it’s a bit less well-oiled than a Honda Type R shifter). 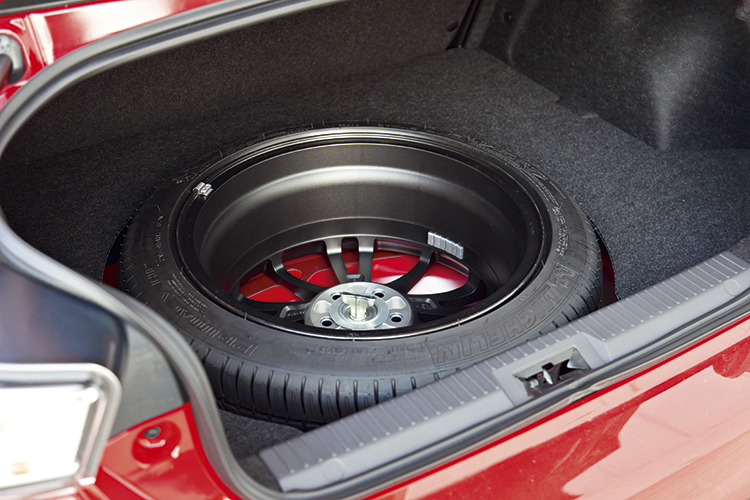 Limited load area is made worse by a full-size spare wheel, but you could use it as an alloy “basket”.

Firing the flat-4 “rifle” is thrilling. It responds eagerly to throttle input, revs with conviction and growls like some angry metal animal that escaped from the Ueno Zoo. It pulls no punches, although the actual oomph available is rather less than what the lively soundtrack promises. Still, the throaty intake note during full-throttle acceleration is entertaining.

On paper, the 2-litre boxer is strongest between 6000rpm and 7000rpm, but on asphalt, the boxing strength is spread evenly across the rev range, with no step-up in energy at any point. This consistent flow of power is probably what Toyota’s in-house drift doctor prescribed for the 86. 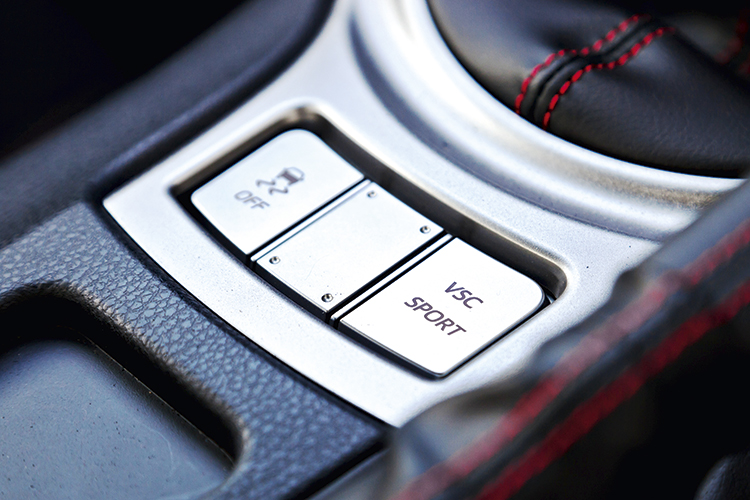 These are the highest quality buttons in the cockpit, and rightly so.

This vehicle is tail-happy by nature, and delighted drivers will be sharing happy tales of their exploits in the 86 every other day. Best of all, the Toyota’s naturally naughty behaviour is meted out in a friendly manner, allowing even a drift idiot like me to play “catch” with the car and not scare myself along the way.

If I drive like a juvenile delinquent supervised by the electronic traction police, the rear tyres chirp; if I drive like a hooligan with both stability control and self control switched off, the coupe twitches; and if I drive like a hero high on LSD (limited slip differential), the coupe slides. This is progressive driving bliss for the car nut, who will also enjoy the bumpy ride and noisy cruise in the 86. 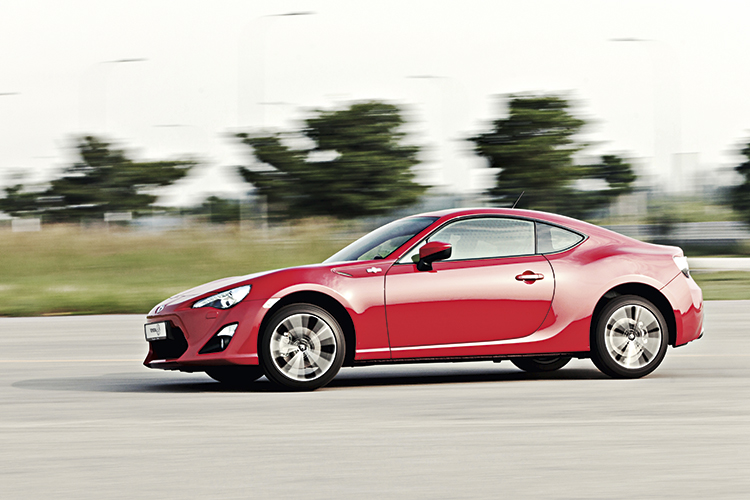 This rear-drive coupe is naughty but user-friendly.

Drowning out the road noise by turning up the stereo would be futile, because the six loudspeakers aren’t very loud and the antenna’s radio reception is patchy. The audio head unit looks like an afterthought compared to the climate control panel, which has dials and rocker tabs that look neat but feel cheap. Sourced from the same bargain basement of the parts factory are the cabin plastics (not much better than a Corolla Altis’) and virtually all the switches, while the door locks operate in a shoddy fashion.

It doesn’t really matter even if there’s no central locking, because the 86 is all about back-to-basics, rear-drive fun behind the wheel. It rewards the keen driver with no less than 86 smiles per hour. 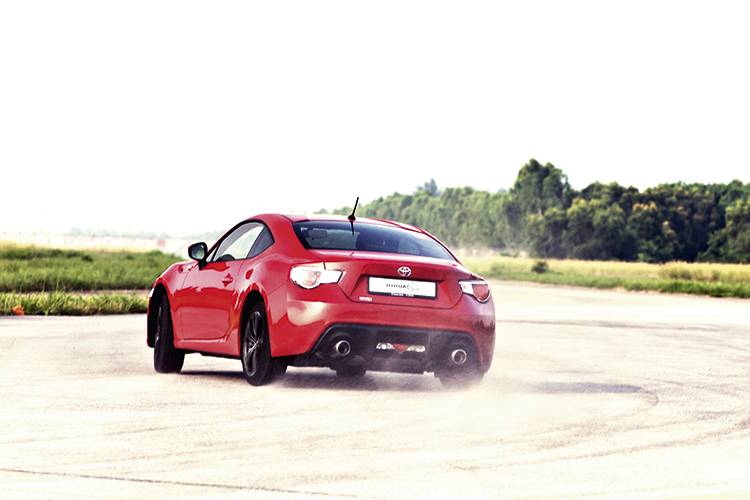 The only thing more tail-happy than this is an eager puppy dog waiting for a treat.

Toyota 86 and Subaru BRZ are great for bean curd runs