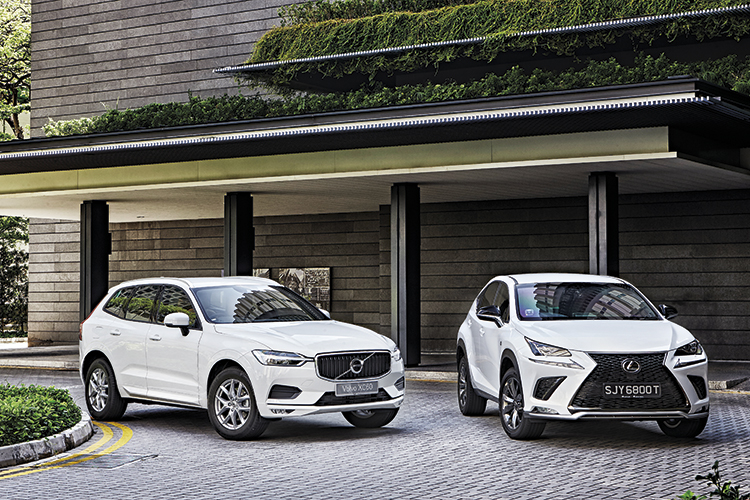 My parents, for the first time in a long while, surprisingly greeted the Volvo XC60 T5 and Lexus NX300 I brought home with effusive praise.

“Okay lah, nice cars,” they gushed, attention briefly transfixed with deadpan cursory regard. Their monotone voices positively fizzled with degrees of excitement greater than they have ever mustered for any one of the sports cars, supercars or bright orange thunder-machines I have disturbed their slumber with.

“Quite comfortable,” their relentless praise continued, as they stepped out upon arriving at my grandmother’s place. “What’s for dinner?” The avalanche of exhilaration finally slushed to breathless halt.

It warms this son’s heart to see his parents’ eyes sparkle with the verve he thought long lost to the ether, when they would regale him with tales of sensual Alfa Romeos, zippy Austins and regal Mercs that made up the automotive landscape of their youth.

What’s more, the market is full of these things now, and they are everywhere for us to admire. Like iPhones! What a time to be alive. 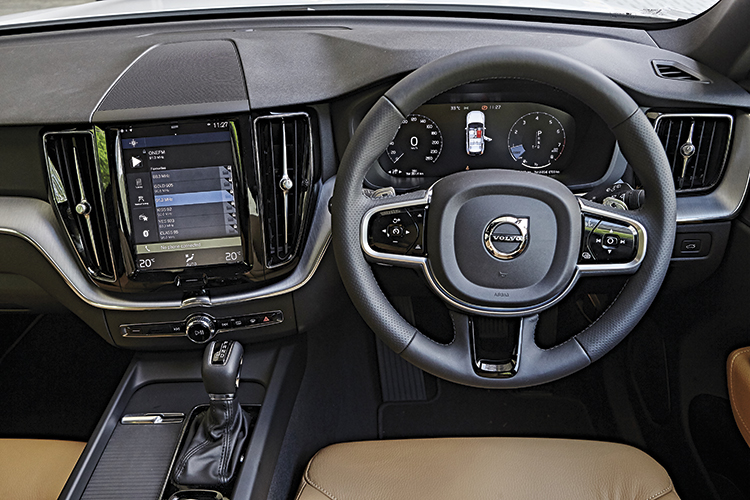 Anyway… Volvo XC60 and Lexus NX. Luxurious crossovers. Hot cakes in today’s automotive marketplace. Tall, tippy things of leather, steel and CPUs. If the format is familiar though, the shapes themselves tell tales of each company’s recent rapid evolution.

Lexus, previously head prefect of the anonymous beige-box club, suddenly had an epileptic fit and emerged with its designers brandishing spiked hair and serrated knives.

Beginning with the truly weird current IS, their stylistic mania has, like a precocious teenager’s temperament, been finessed with each new model to deliver increasing coherence and even something approaching beauty.

Finally, in 2018, their design language is in full, magnificent bloom. Just look at the jaw-dropping LC and the exquisitely crafted new LS for evidence.

The NX was born partway through this coming-of-age process, and the dizzying number of hacks, slashes and surface-changes are only just about handsome enough.

Despite the now utterly conventional hatch-on-stilts shape, this lends the Lexus a striking presence unlikely to be missed by your colleagues in the company carpark. 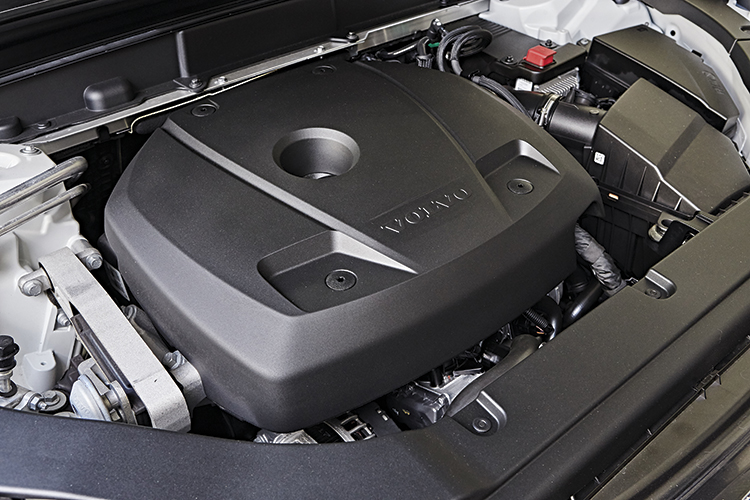 Parents everywhere could learn a thing or two about guardianship from Geely.

Having languished for years under Ford’s simultaneously under- and over-involved ownership, the wounded Swedish brand came under the wing of Geely. The Chinese conglomerate pumped in billions in funds, but allowed its ward to flourish and forge its own path.

The result: every model from the XC90 is achieving critical acclaim, and Zhejiang Geely Holding Group has a sophisticated European foundation upon which to launch its new premium brand Lynk & Co.

The XC60, the middle rung in the Swedish marque’s SUV fleet, arrives not just in a market uniquely primed for cars of its type, but also with a bold, clear confidence oozing from a brand very much in the ascendency. 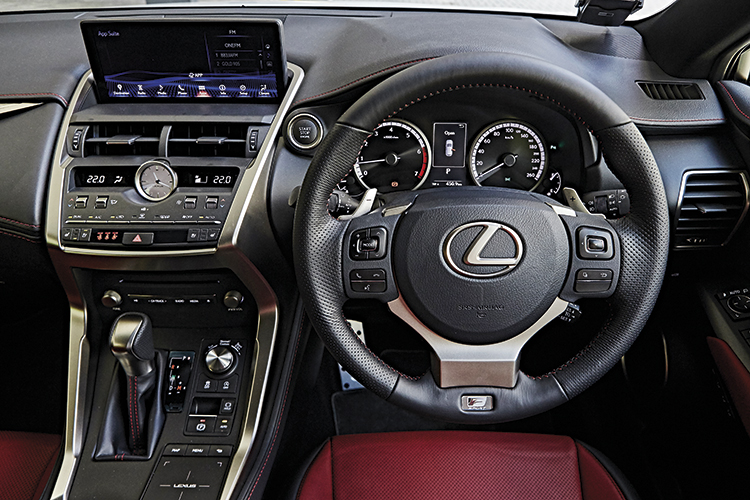 NX300 cabin is impeccably solid, powerfully air-conditioned and of unquestionable quality, but Lexus needs to learn a lesson in “less is more” which can be taught by Volvo.

Elsewhere in the Lexus stable, in 2.5-litre NX300h form, is a heinously complex and devilishly clever but slower hybrid powertrain that will not partake in this test, which involves the 2-litre NX300 with no h.

On the chassis front, while both crossovers have slightly different suspension elements, they do not, as we will explore, materially differ in dynamic objective or character. 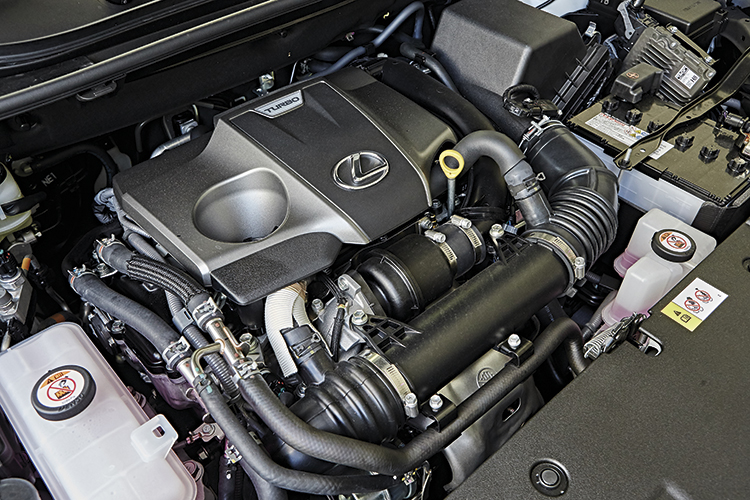 Interior design in recent times has revolved around the integration of ever more sophisticated infotainment systems. By and large, car companies have separately arrived at one of two layouts – either a landscape screen perched atop the dash in the manner of the entire movement’s pioneering BMW iDrive, or the simple integration of a touchscreen beneath the ventilation ports.

Volvo, however, has gone the way of Tesla and installed a giant portrait screen in the middle and crammed every control it could into the software interface. This approach has freed up the rest of the dashboard as a canvas for the designer’s whim.

This freshness is an aesthetic triumph in the showroom or, even better, out in the sunlight, where the uniquely Swedish bright-and-airiness comes radiantly to the fore.

The fixtures, the flowing and cascading metal sweep running right across the dash that ties it all together, their tasteful restraint, and their placement all combine to create an ambience distinctly Volvo. The XC60 is a wonderful place to spend time in.

Use it, though, and inevitably some functions require more fuss than they would without the same artistic commitment to minimalism.

Having to prod at a touchscreen simply to adjust the air-conditioning is at best mildly irritating and at worst dangerously distracting while on the move. 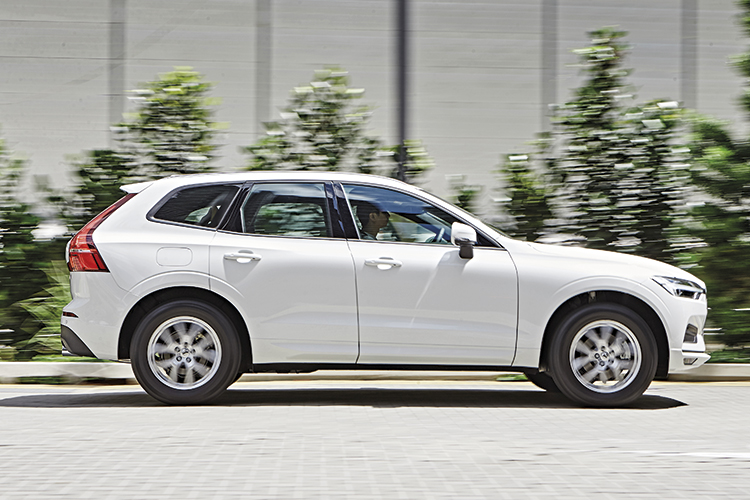 Volvo XC60 is quicker and better prepared for long-distance journeys, but prefers a relaxed pace.

First acquaintance with the cockpit of the NX is less likely to leave you awash with the same sense of lovely modernity.

The console is a comparative button-fest, for one, and the grey busyness of it all is lacking in graceful simplicity.

Special chagrin, however, has to be reserved for the infernal infotainment system, controlled as it is by a touchpad on the centre console. There is a reason why dash interfaces do not run on Windows XP. Mouse-based systems that require fine precision do not work in a moving environment. The Lexus’ befuddling menu layout only makes it even worse.

On the appearance front, this Japanese interior seems at once penned with too much imagination and not enough.

To wit, why are there white borders around every menu? Why is there an unnecessary music-note watermark in the media interface?

They are the equivalent of using clip art on your Powerpoint presentation, and the kind of thing that would make Steve Jobs turn in his grave. 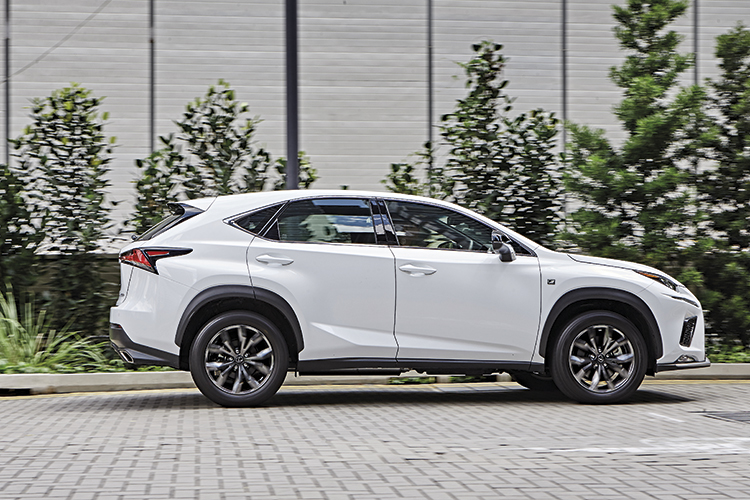 Rather than flow smoothly and cascade naturally with the eye, the fine stitch lines contain haphazard changes in angle. The Lexus designers clearly don’t believe in “less is more”.

Oh, and the big block of silver bracketing the whole shebang reflects on the windscreen in direct sunlight.

All that initial irritation, however, is a cautionary tale against judging a book by its cover, and illustrative of the perils of choosing your car without an extended test drive. Because the Lexus’ irritating attributes very rapidly fade away on prolonged acquaintance.

Cruise along for a day in the NX, and the exceptional hush and intangible but uncanny sense of immense integrity will have you congratulating yourself on money well spent.

Quality is quality, and 29 years on from when the LS400 stunned the luxury car industry, still nobody does it quite like Lexus. This NX SUV has sophistication suffused into its very being. Plus, the air-con channels the arctic wind and could conceivably bring winter to Singapore if you left the windows open. 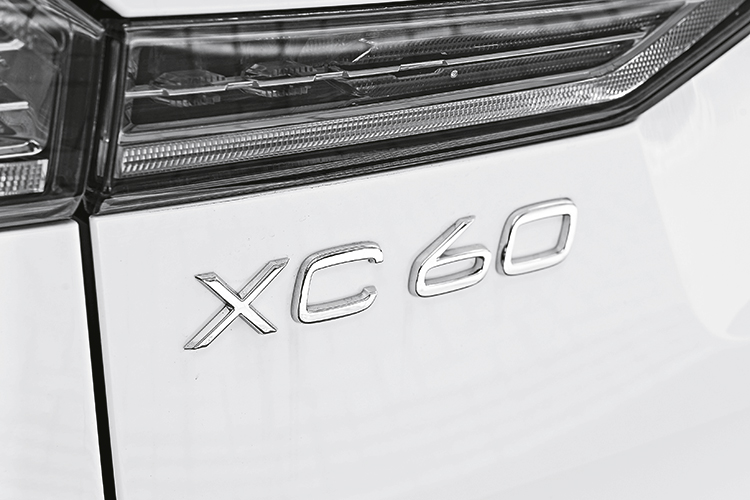 The XC60’s 505 litres of boot space, expandable to 1432 litres with the seats down, compares nicely to the 475 litres and 1520 litres of the NX300. Wheel-arches are marginally less intrusive in the Swedish trunk than in its Japanese rival, but both cars are capable of presenting a large, flat load area when you do need to haul cargo.

A minor quirk is that the NX does take a curiously long time to open its boot’s tailgate upon command, such that on occasion, I have pushed the button twice and confused the electronics.

The kids will be happy on the backseats all the way through to their teenage years in either of these vehicles, but with the Volvo’s more upright stance again letting in more light.

What about the driving experience? Does it matter?

These are luxury SUVs without “Porsche” emblems, so they flop around the city with sufficient assuredness to avoid being dangerous, but in a largely detached fashion.

Ultimately, both cars have front and rear axles and centres of gravity that converse with the awkward politeness of business associates forced to mingle at the company D&D, rather than with the passionate romance of intimate lovers. You will need to think slightly ahead of any sudden movement, instead of flowing naturally into it like you would in a hot hatch. 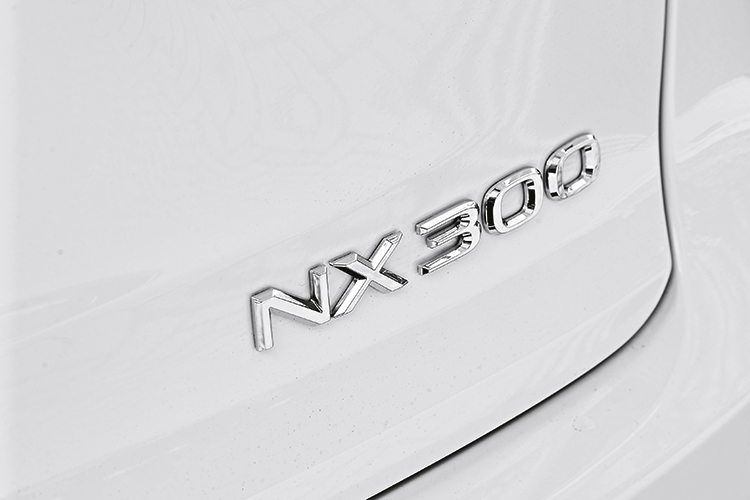 Of the two, the Volvo is the more unpretentiously disinterested in being driven beyond a matter-of-fact pace, which therefore brings with it just a little more bump isolation. Which, like the rest of the Volvo range, suits the XC60’s easy-going, comfort-oriented personality just fine.

The Swedes make no bones about this, and the XC60 T5 tested here in Momentum specification does not come adorned with “F Sport” badging or adaptive suspension like the Lexus NX300 does.

You get a smidgen more body control in the NX and you do sit a little lower, but eventually I settled on the “comfort” setting and drove the Lexus the way luxury crossovers are meant to be driven: sensibly.

Anyway, if you want driving engagement, look at a Porsche Macan. But if an engaging drive is your priority, why buy an SUV?

Regardless, that’s a philosophical argument I’ve since badly lost, so I guess it would interest shoppers here at most to know that both the Lexus NX300 and Volvo XC60 are good enough in this department. 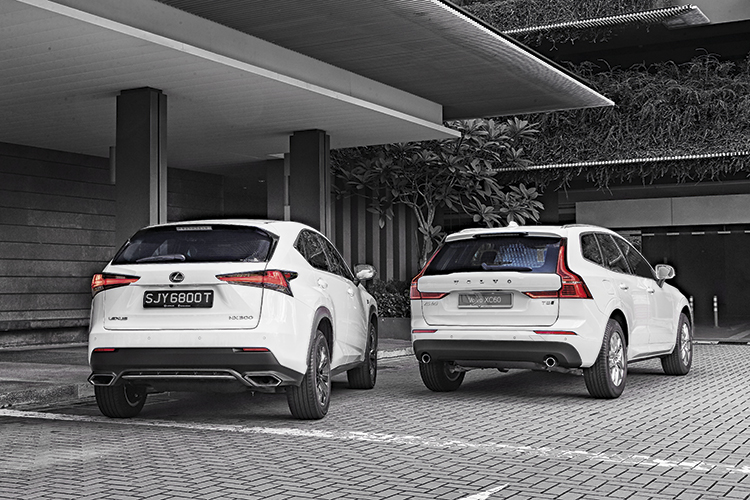 Ditto for their 2-litre turbo powertrains. Strong enough and invisible enough to not distract you from One FM 91.3, unless the red mist descends and you startle them. Then they drone and grumble distantly like the four-bangers that they are until you calm yourself back down.

Which luxury SUV would you rather have? They do their jobs very well, and they do grow on you with prolonged exposure as commuting tools.

Their distinction, with the ultimate irrelevance inherent in their type of most dynamic measures, will inevitably come down to a matter of aesthetic taste.