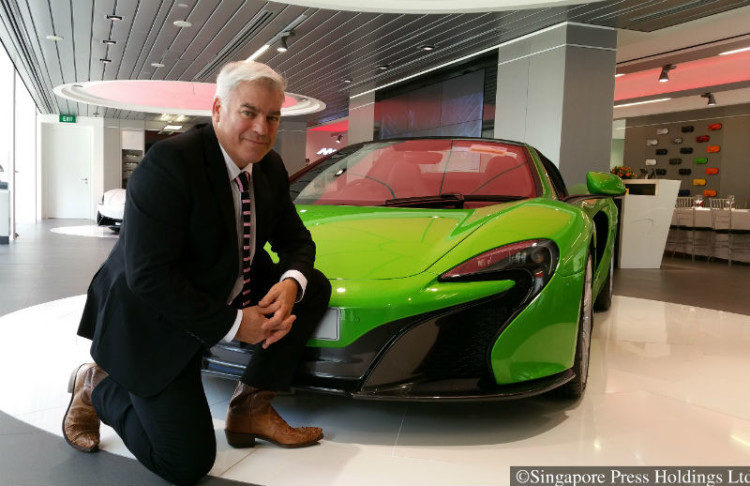 Frank Stephenson is among the most influential automotive designers today. Before McLaren, the 56-year-old American worked with Ford and Ferrari as well as the Fiat Group and BMW Group. He was in town for a design forum this week and The Straits Times caught up with him at the McLaren showroom.

Ferrari is about sensuality, Lamborghini is about extreme brashness, Porsche is about the continuing evolution of an iconic design. What is McLaren design about?
I think it’s controlled precision. It’s almost like surgical cutting.

But it’s not that it’s not emotional because with supercars, if they don’t have emotion, they’re not doing their job. It’s what people expect and it goes from everything, from the design to the engine to the sound and, very much, the interior. Because there is so much electronics, it becomes a prerequisite.

So more and more gadgets?
Yes. But without overloading the car because the last thing you want to do is put too many buttons in it. That becomes a distraction. It’s better to simplify. You have quirky French cars, sensual Italian cars, Japanese cars which are science-fiction sometimes with lots of gizmos, and German cars which are solid.

But English cars can be too correct sometimes. We did that with the MP4-12C – people say it’s great, but it’s not emotional. So we had to make the next car have more of a personality and more of a visual impact.

What kind of buyers does your styling reach out to?
Styling in one sense is trying to make the car attractive but, on the other hand, the car has to perform.

I don’t agree when people say function leads to form. That’s not the way I think. The buyer buys this car because it’s a performance car. They’re not buying it for the way it looks. And the way the car is designed to perform, that generally tends to be the look of the car.

That’s why we work so hard on aerodynamics and with the packaging guys to make the car have a very low centre of gravity, with the engine set very low – that gives you the possibility to design a different car. So engineers push very hard to get enough air in and enough air out. That leads you to design a car in a certain way.

The McLaren buyer likes cars, but he appreciates the technical refinement of a car.

So form follows function?
No. The form is the function. Good engineering will sell the car. If a car performs beautifully, it will look fantastic. I mean, I’d like to have an F-35 (fighter jet) because it looks nice. But it’s not designed to look nice. It’s designed to perform. And that’s its beauty.

What I like about design is that you have to understand the science of aerodynamics, proportions and efficiency. You can sit and draw a car that looks fantastic and make a model and send it to the motor show, and everybody claps and says “Build it”.

And you take it back and the engineers go, “You can’t even get inside this car and, if you get in, you can’t see out”.

So for us, we work very closely with the engineers from the very beginning. What you’re designing is a concept car which engineers make real. Not a watered-down car which is more normal.

So you work very closely with the engineers.
Yes. There has to be feasibility to the design, but that does not mean we don’t think ahead. When we were designing the 570S and GT, we had a (Porsche) 911 in the studio. That’s the benchmark, so we have to be better in every respect.

McLaren chairman Ron Dennis is known to have a very strong personality and is reputed to be very hands-on. What’s it like working with a boss like that?

The thing about design is that everybody has an opinion. Everybody is a designer. I remember the first time we showed Ron Dennis the P1 and he had no idea what he was going to be seeing because he says, “Don’t show me your drawings, your clay models, just show me the car when it’s finished”.

So when he saw the P1 for the first time, he turned white and said, “You’ve been working for one year to make this piece of crap?

“I can kill the project right now, which is what I want to do, but it’s your job that’s on the line, and if this car doesn’t sell, you’re fired.”

So, you’re still here…
[Laughs] I always had a good feeling about the car.

So when will we see something as radical as the P1?
Oh, the P1 is old. The last thing a designer wants to do is be satisfied with his work. That means he doesn’t have any more ideas.

So the P1, if we had to do it again, it would be another car – more radical. Which means the next supercar we do at McLaren should not only be at least as radical as the P1, but it should also be more radical.

We shouldn’t change things to make them different, because that doesn’t make sense. We make changes to make things better.

So the new car is on the drawing board?
No, we’re building the cars. We’re working on clay models. You don’t have to wait too long – it’s coming soon.