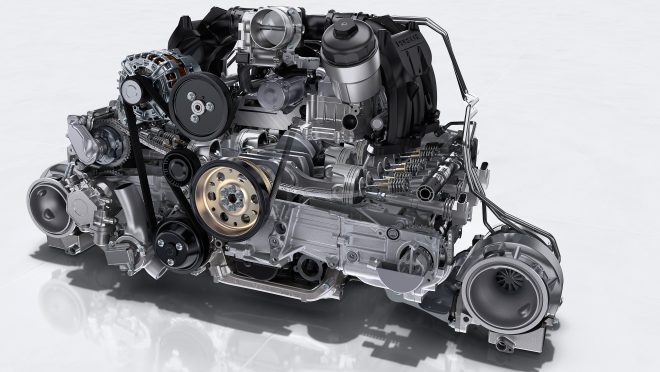 That’s not some extravagant term: in fact, the clue to understanding the engine is in the name itself.

Due to their flatter design, they can be mounted lower in the chassis.

That lessens body roll and improves handling – two traits which contribute dramatically to driving enjoyment in any car.

Such designs also take up lesser space in the car’s engine compartment, which then allows for more passenger room.

Birth of the flat engine

The first designs were produced in 1896 by Karl Benz who initially called it the ‘kontra’ engine.

The basic design of a flat engine consists of cylinders arranged in two banks on either side of a crankshaft.

For example, Porsche, one of the biggest proponents of flat engines, uses turbocharged flat-4 and flat-6 in their sports cars.

That means that each bank either contains two or three cylinders.

Looking at the engine from the side, the pistons move in and out simultaneously, similar to how a boxer punches.

For that reason, ‘flat’ engines are also called ‘boxer’ engines.

Flat engines do not need counterweights on the crankshaft to balance reciprocating parts due to their inherent natural dynamic balance.

As a result, they are better balanced than the comparable inline-4 engine.

Subaru are another manufacturer which makes extensive use of flat engines.

Flat engines, especially the four-cylinder ones, are smoother than the more common inline-4 engines.

This is because of the flat-4’s offset cylinders. 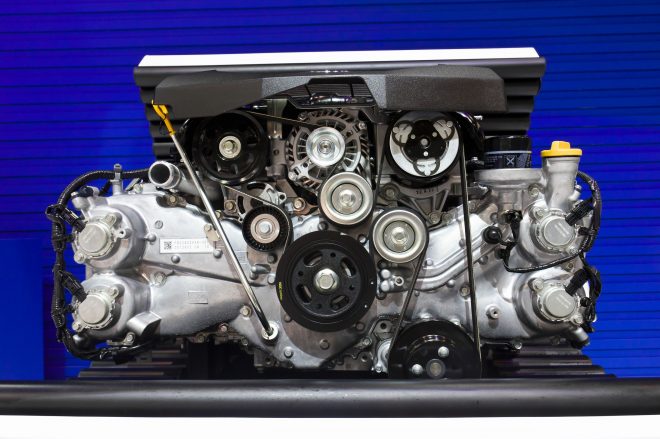 A 2-litre Subaru boxer engine on display at the Thailand International Motor Expo 2011 in Nonthaburi, Thailand.

That design, consequently, creates a side-to-side rocking motion, but it’s not severe enough to warrant fitting balance shafts, unlike in an inline-4.

The low centre of gravity and shape of the engine also makes it more suitable to mid- or rear-engined designs.

That is why, despite the protestations of physics, the iconic Porsche 911 has stuck with this design ever since its inception!

All four-cylinder engines have non-overlapping power strokes, and the flat-4 engine is no different.

This causes gaps in power delivery, which also explains why engines with more cylinders feel smoother.

The exhaust headers must also be designed in such a way that they even out the exhaust pulses.

Not doing so results in irregular exhaust pulses, which was the cause of the ‘boxer burble’ of past Subarus.

The design of boxer engines also mean they are more expensive to produce.

Modern luxury cars have almost all done away with the boxer configuration in favour of straight and V designs for their smoothness and relative ease of manufacture.

Do turbocharged engines need to cool down before being shut off?